On my next trip to Wollongong – the satellite city of Sydney- I decided to explore the street art. I also got myself a local guide, who just happened to be my son. Together we hit the streets to look for treasures.

To make our task easier, a finger pointing in the right direction was installed on the Main Street. 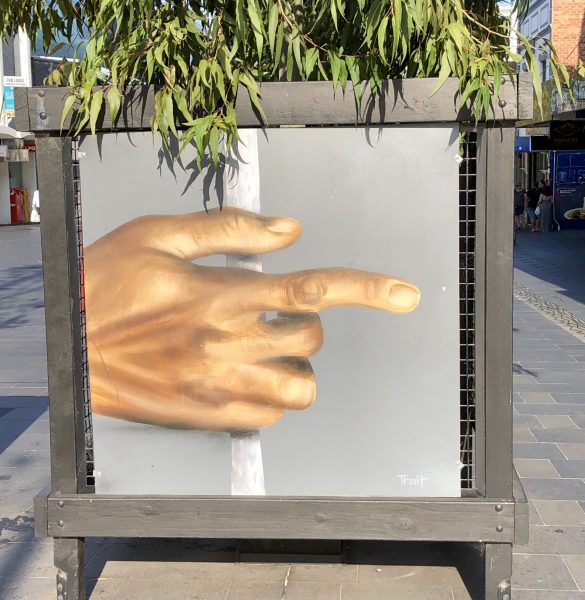 Later I found more similar art work. The hand is holding a branch, which organically becomes the trunk of a real tree. 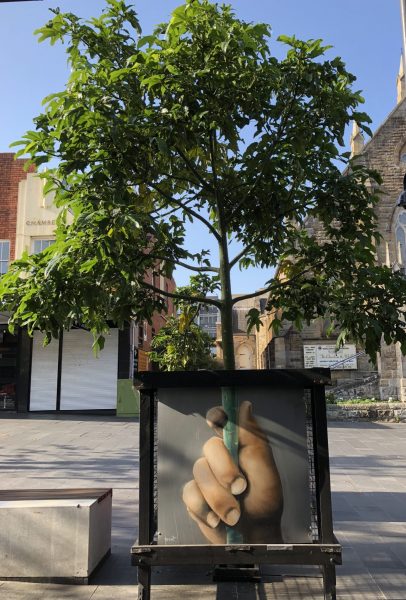 A tree grows from the hand. 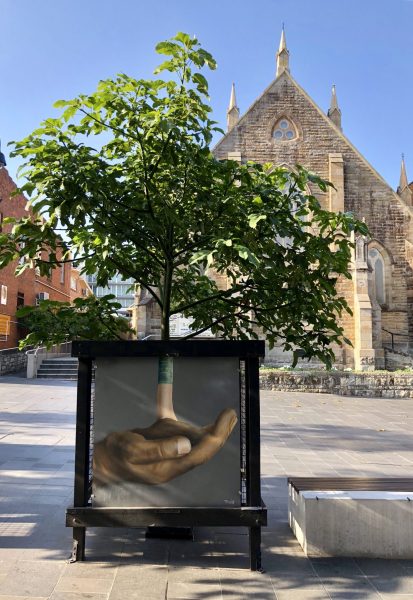 Someone had this great idea and it looks really interesting. 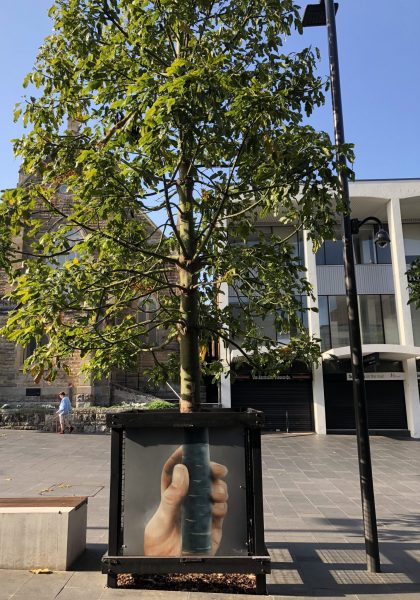 A cute little bird sits on another tree.

This time I decided to group similar artwork. There were a few birds wearing colourful scarves. 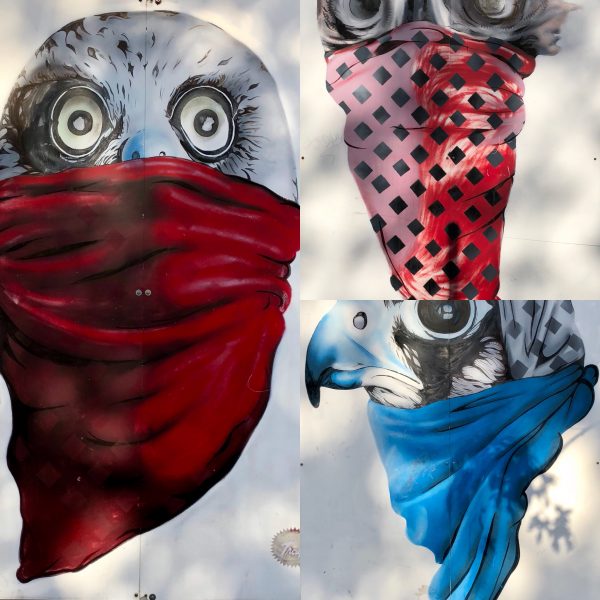 And two others with plain scarves. These  Street Art Panels were created by Traits. 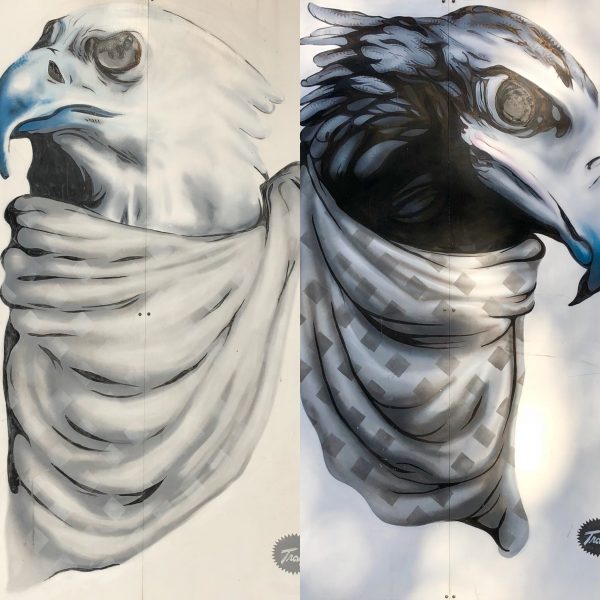 These two parrots covered the front gate to a small store. 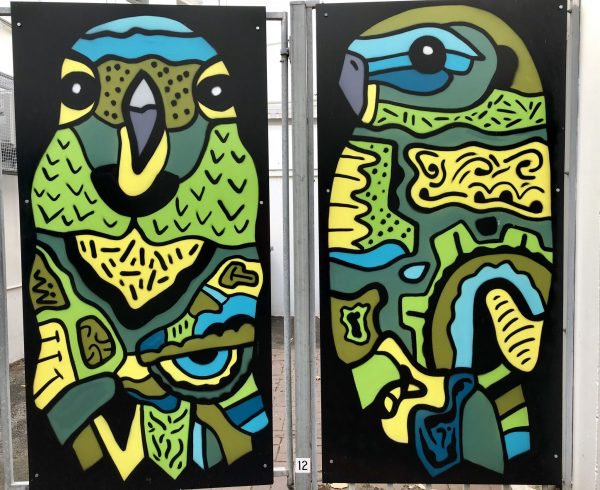 The other side of the gates was protected with a snake. 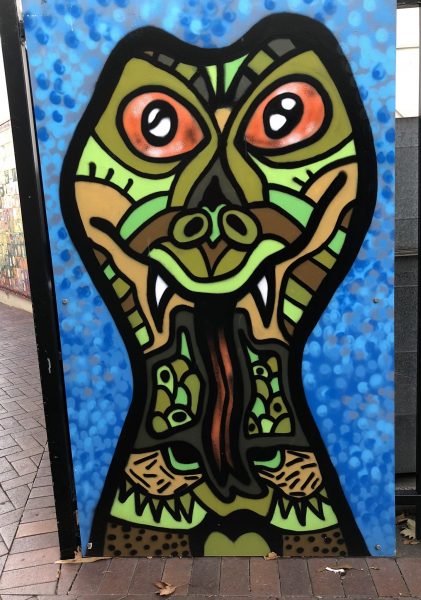 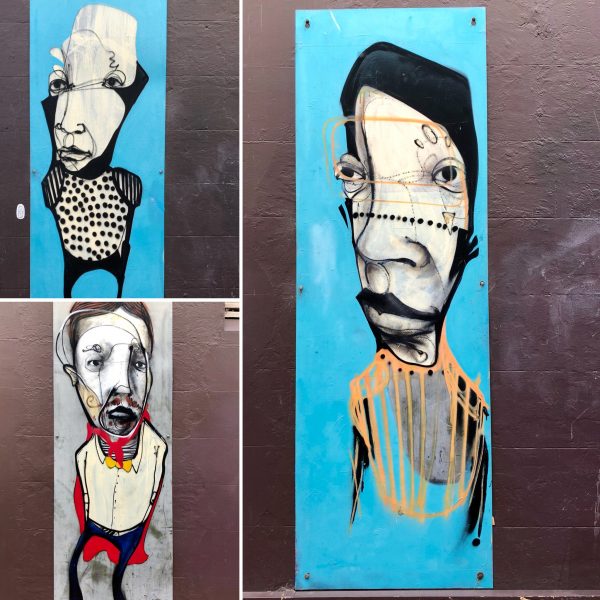 Syke is quite a famous artist, whose work I also saw in Melbourne. 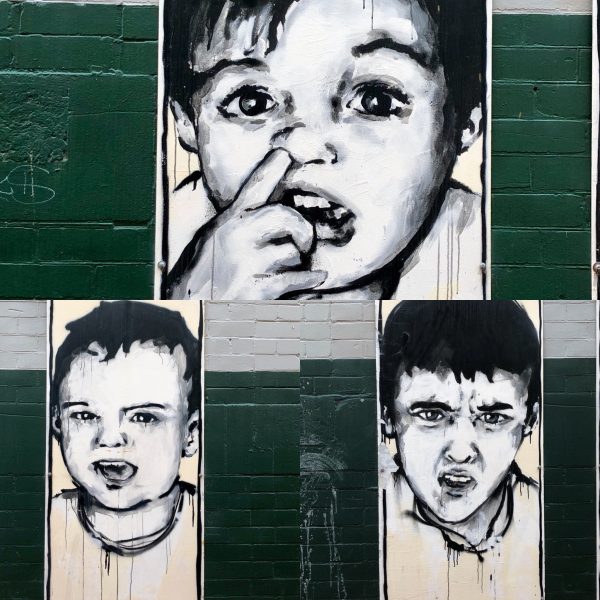 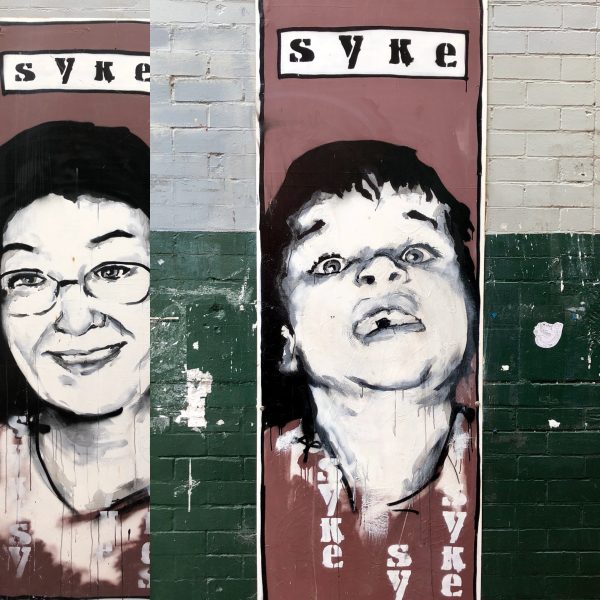 Mythical creatures are having fun. 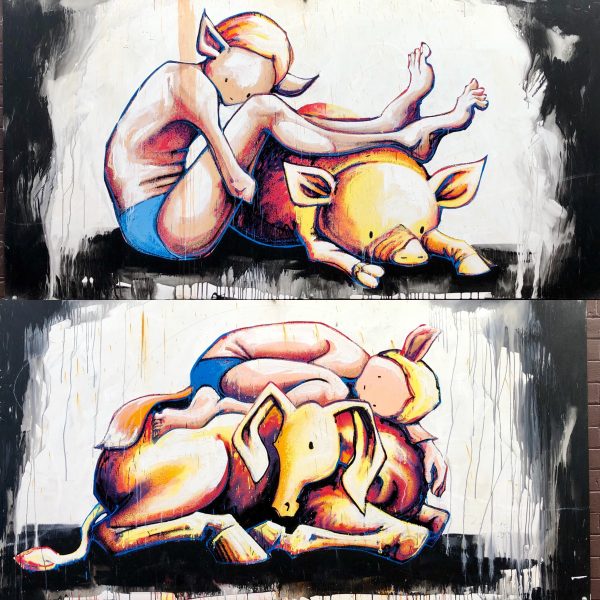 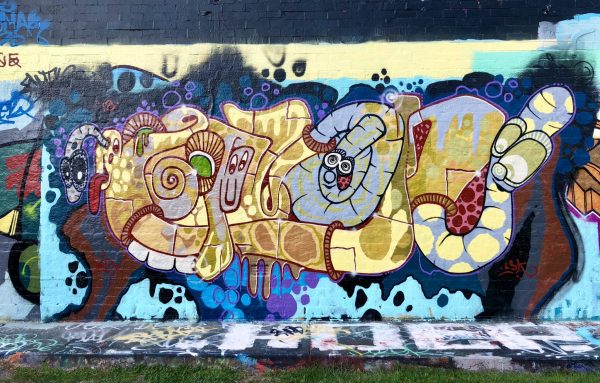 This one looks like an art gallery under the sky. 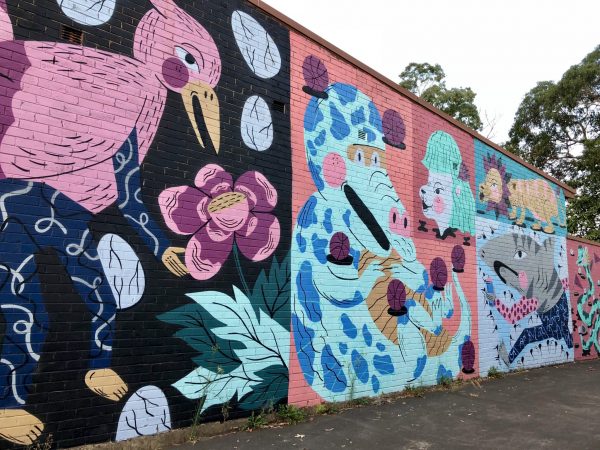 When I look at the huge murals like this I wonder how the artists can see the whole picture while attending to small sections of the work. 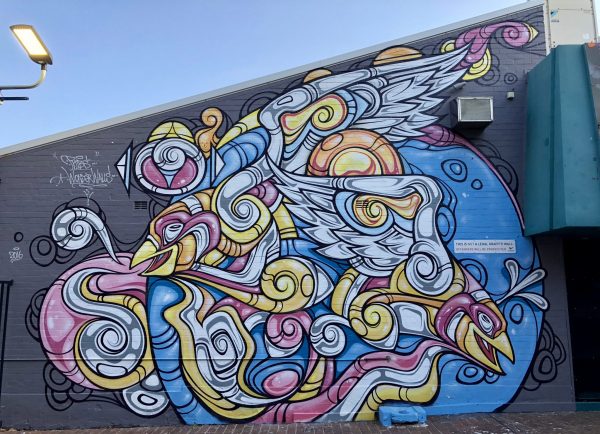 Something from a horror movie? 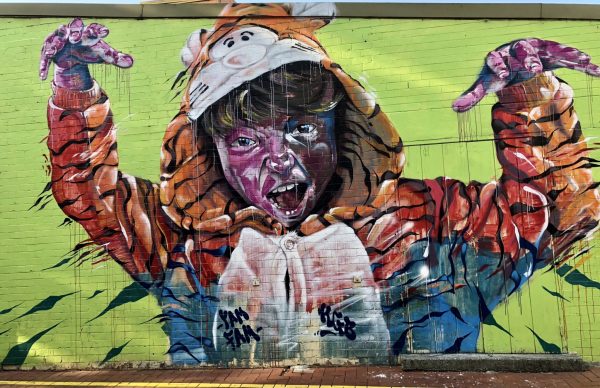 Large portrait of a woman in blue. This is a work from a local artist Claire Foxton. 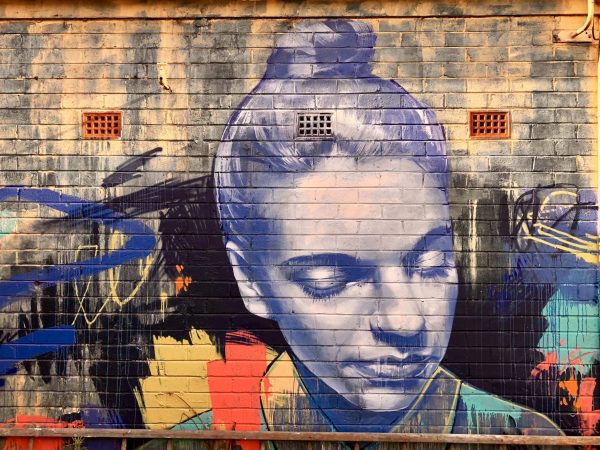 Fishing from the elephant  – this is an interesting idea. 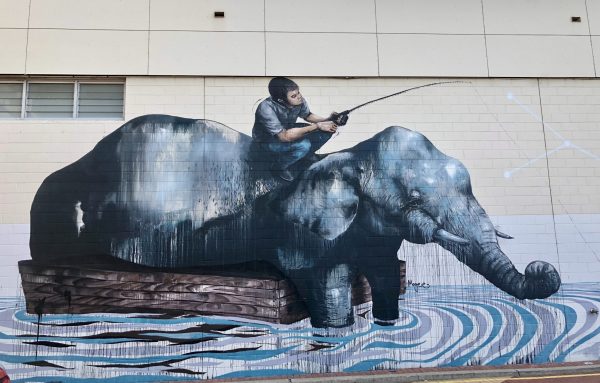 This girl is going to be consumed by the monster any second now. 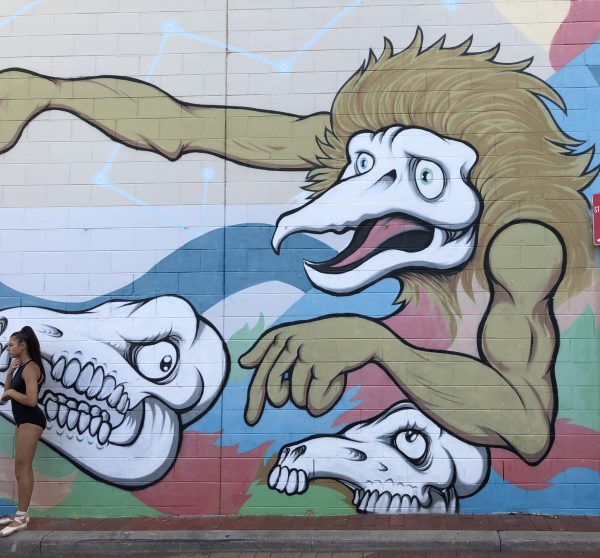 Another portrait of a woman. This work was so large that it didn’t fit into the camera. There is also a hand sticking out of the ground. 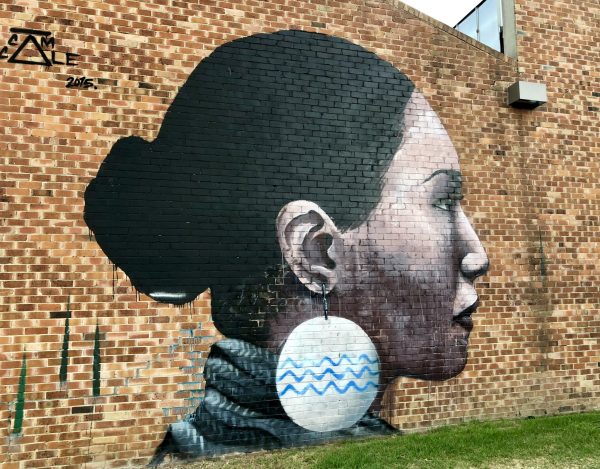 Multi-storey carpark looks so much better now. This is a new addition to the street art by a local artist Claire Foxton. 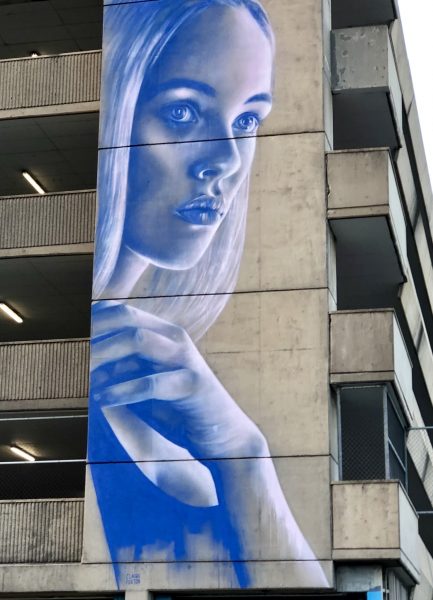 Koalas are not aggressive creatures. At all. I am not sure why they look so vicious in this painting. Interestingly enough, but the guy has a tattoo of a gum leaves and seeds – which koalas love. 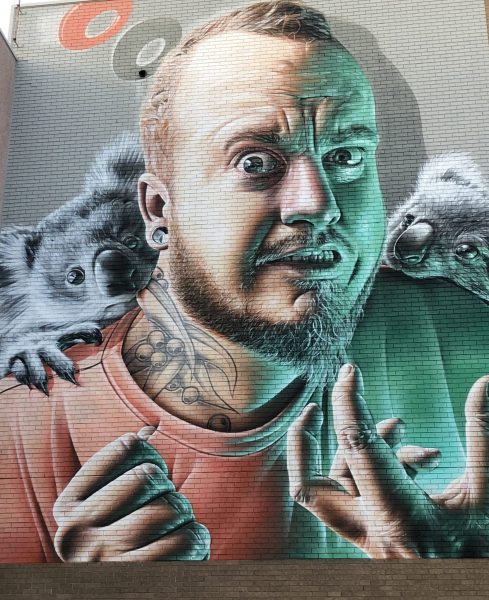 Great work of a backpacker with a magpie. It really stands out, and not only becaus of the size. 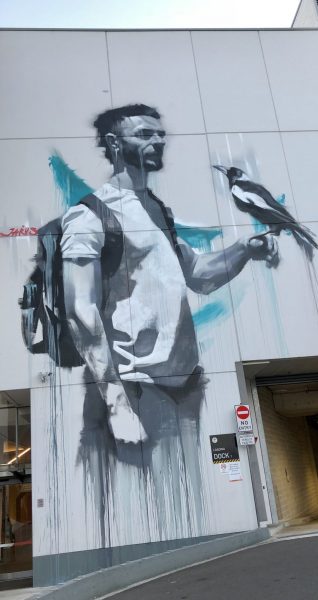 I walked past this town hall without any thought. My son watched me for a while and asked if I found anything odd about the building. I had to look again. This is actually a painting on the back of the building. It was done by a group of art students of a local university. It looks totally real. 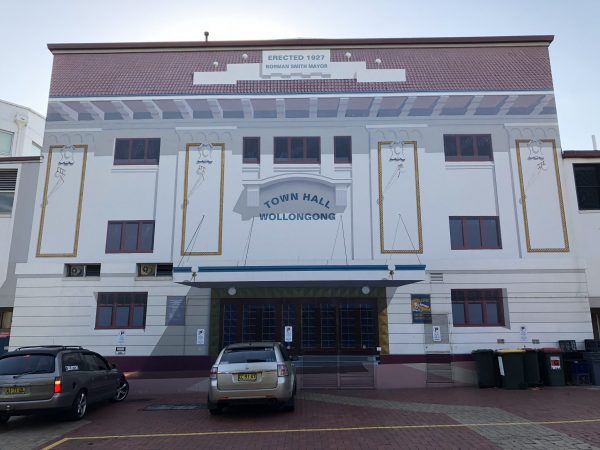 A dance school was taking promotional photos in front of the large mural. Isn’t it great? 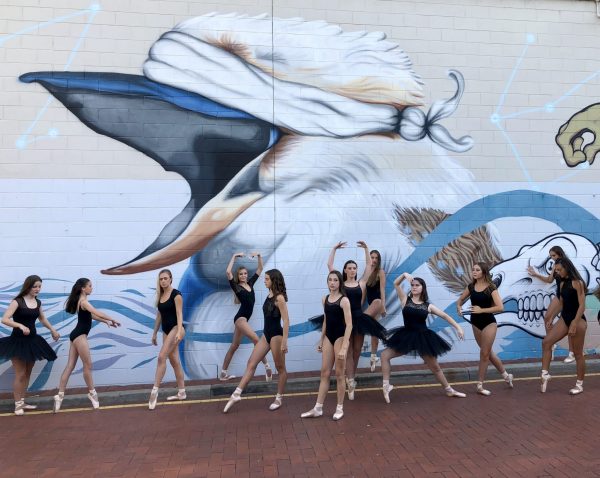 Some artists decided to go 3D. This sculpture adds a little bit of light to the shady area. 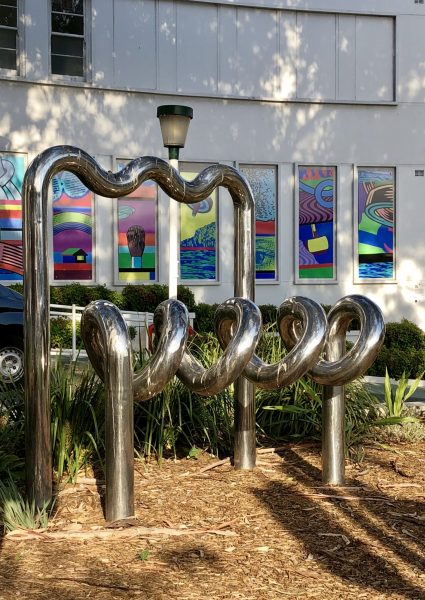 The local government commissioned hugely expensive street decoration. Residents scratched their heads when the installation took place. They scratch them now too, when the look at the result. There must be some deep meaning behind it, but it’s still a mystery. 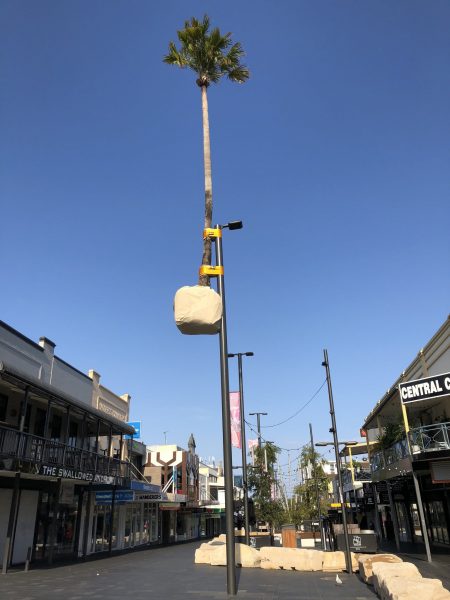 After our long walk though the back streets and alleys of Wollongong, my guide became a bit tired. So he decided to take a rest on one of the more accessible palm trees. He looks quite comfortable. Maybe this was the whole purpose of the super strange installation? 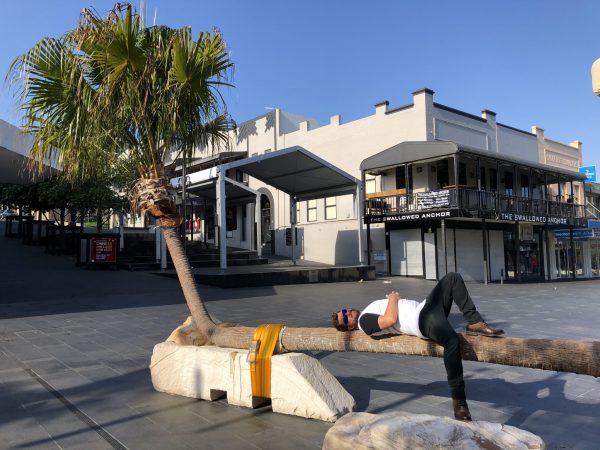