George Town in Malaysia is a UNESCO World Heritage Site. This title was awarded to this city in 2009, after local government introduced and supported unique street art, consisting of wall mural style paintings and steel-rod caricatures, which display history of the place and community stories with good humour. Since 2010 there were 52 steel-rod sculptures installed and it became a new public art form in Penang.  The majority of the art work in concentrated around Armenian Street, the most popular street in Penang. Not all sculptures and paintings have the names as they are mainly referred by location or subject matter. Despite my heroic efforts to combat the heat and exhaustion, I managed to find only half of those art pieces. Here they are!

The “Procession” sculpture commemorates the Grand Float Procession of 1926 in honour of  Tua Pek Kong’s birthday. Since it was the Year of the Tiger, the tiger’s mascot was carried through the streets.  A British tourist observes this procession with a great interest. 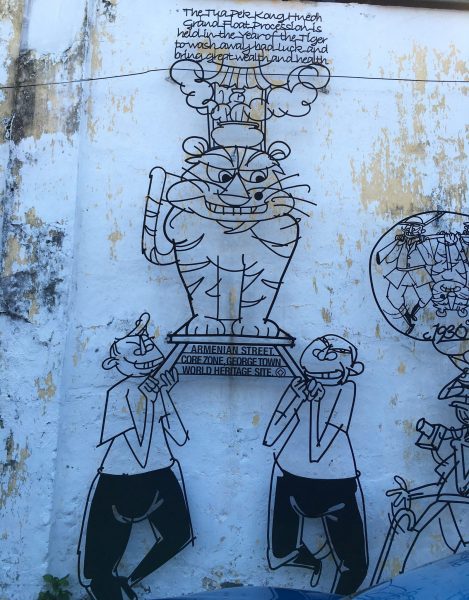 The “Ironsmith” sculpture illustrates the alternation between a golfer and a blacksmith. The golfer brought a set of old golf clubs which he wanted the master to fix. Changing the expression of “strike the iron while it’s hot“, the blacksmith told the man don’t strike the clubs when he is hot! 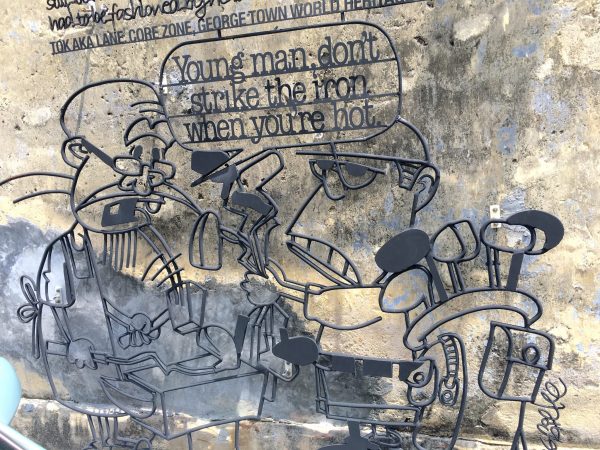 The  “Kandar” sculpture is about a rice meal that was cooked by Tamils and sold right there on the street. The word kandar means a long pole, which was used to deliver the food. 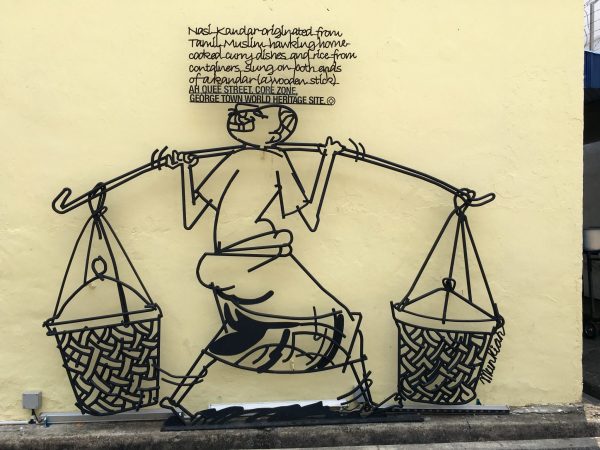 These two men are part of the composition above. 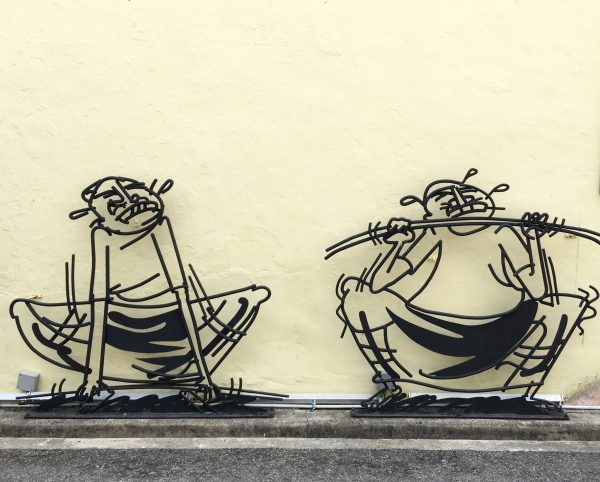 The “Ah Quee?” sculpture was installed in the memory of Kapitan Chung Keng Kwee, one of the wealthiest and most powerful men in 19th century George Town. Strangely enough his name was spelled in a few different ways: Ah Quee, Ah Kwee, Ah Kooi and Ah Kui, which surprised a foreign visitor. Kapitan was a really wealthy man, who could afford one huge mansion and a few more properties. Because of the goodness of his heart Kapitan allowed the local government to demolish two of his properties, so essential roads could be built there, and got two streets in George Town named after him. 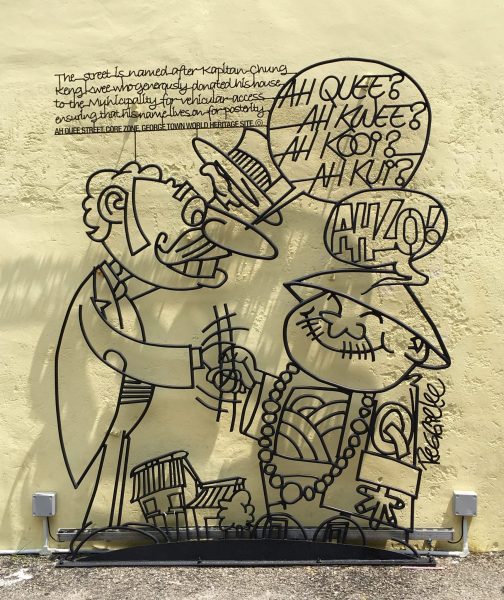 The “Quiet Please” or “Street Fighters” sculpture demonstrates two men fighting in the street below the window of a priest. It’s getting a bit complex, because the year of building this Church of Assumption doesn’t match the arrival of Portuguese to Penang  (as told by my guide). So I am not getting too deep into this, but to me it appears as a sculptor got a bit confused. 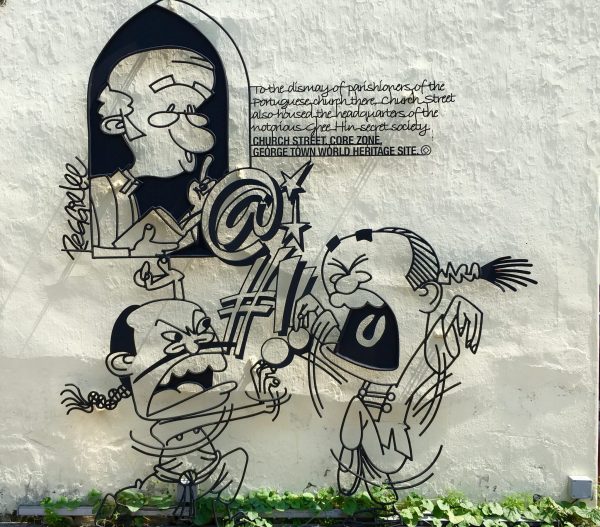 The “Double Role” sculpture is  installed on a wall on Chulia Street Ghaut. This one is quite recent, installed in February 2013. It presents a Punjabi man performing as a firefighter and a policeman at the same time. Cleverly incorporated with a real fire hose barrel, it adds some interest to the sculpture. 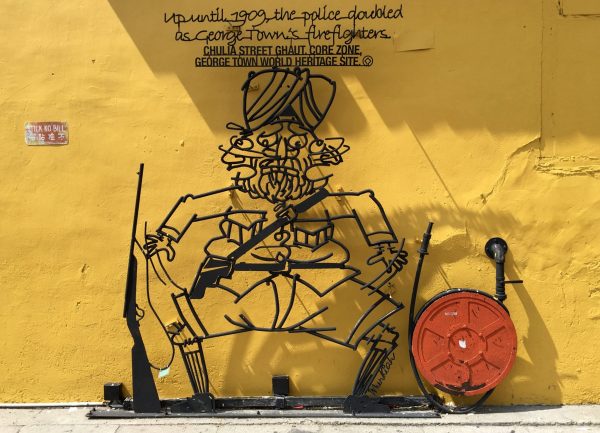 The “Then and Now” sculpture was erected in Armenian Street, which undertook a lot of transformation in the past. It started as a black- and coppersmith trade hub, and slowly turned into a recycling area. 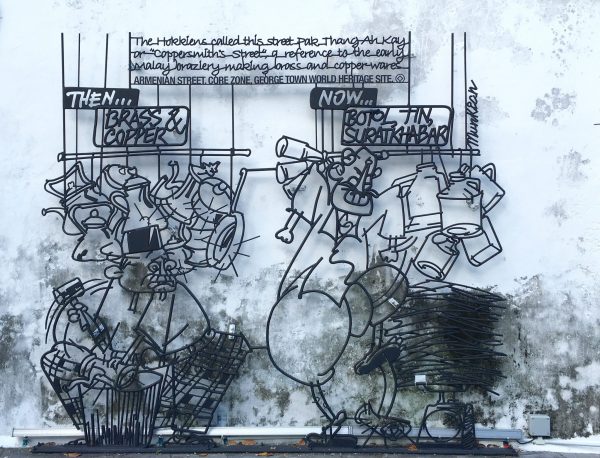 The “Gold Teeth” sculpture in a humorous way tells a story of a rich woman, who came to see an Indian goldsmith in an attempt to make a gold ring from her gold teeth. His shocked face tells the rest of the story.  This sculpture was one of the final artworks installed in George Town. 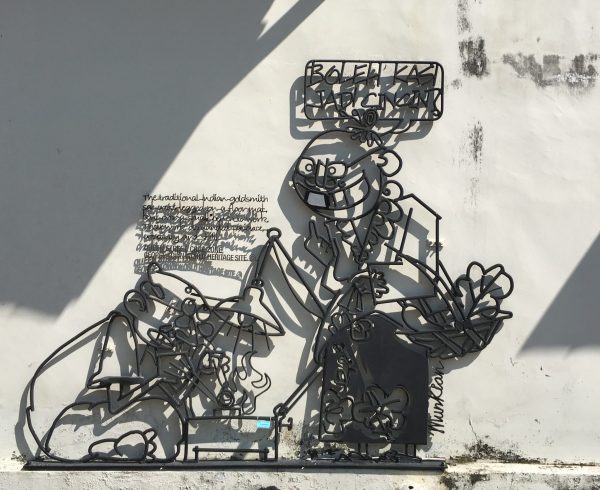 “The Main Street” sculpture shows the transformation of Chulia Street, from the time when this place was a home for the South Indian community, followed by the British colony, until recently it became a backpacker hub.
The first Indians arriving into George Town were convicts, brought here as free labour, after them came missionaires, traders and merchants. The Tamils set up many businesses, specialising in money-lending and in trading. 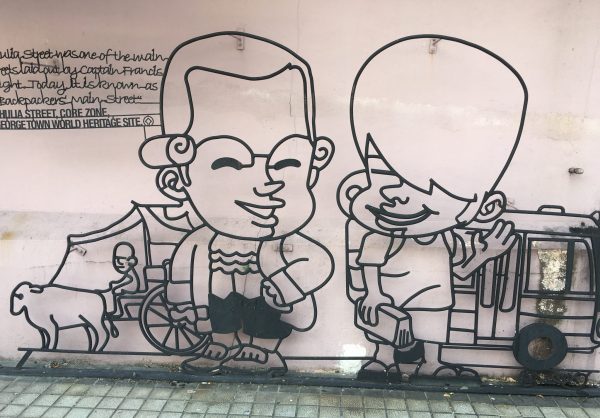 The “Cannon Hole” sculpture is about the Penang Riots in the end of last century. They say that the government decided to fire a cannon to stop the riots. I don’t know if that shot achieved anything to pacify people, but the huge hole in the Acheen Mosque was definitely delivered. I was told it’s still there. The sculpture shows a rickshaw driver disappearing in the mystical hole, while his passenger looks totally stunned. 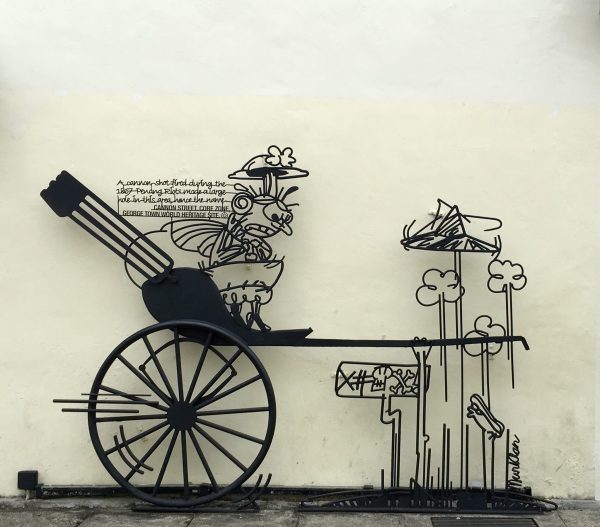 The “Haj Pilgrimage” sculpture displays Muslim pilgrims getting ready for their trip to Mecca. Acheen Street, where this sculpture was installed, played a big role in haj pilgrimages  in the early 20th century.  Here Muslim travelers could buy tickets for their trip. And also during the haj season many stalls were selling food, clothing and other goods to satisfy the needs of the pilgrims, their relatives and friends. 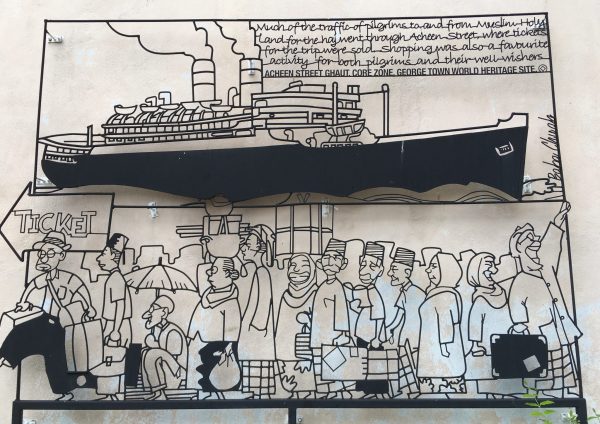 The “Shorn Hair” sculpture shows two hairdressers working on the banks of  Prangin Canal. They throw cut locks into the water, while an astonished boatman is passing through. Way back when this canal was still open, it was used for delivery of goods. Later on it was covered. 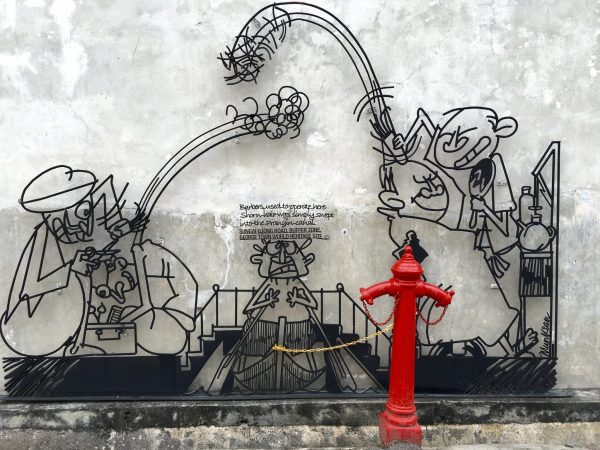 The “Budget Hotels” sculpture promotes lots of budget hotels that are located on Love Lane and Chulia Street. I actually stayed in one of them (The Small Inn) and loved it. It was $15/night and right smack near the best street food market. 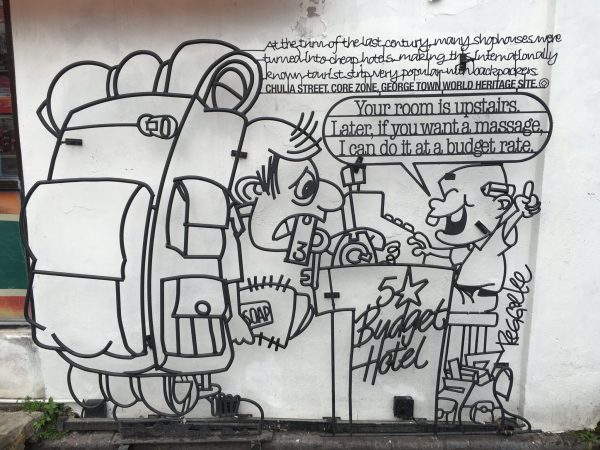 The “Where is my husband” sculpture is right near Love Lane in Muntri Street. The majority of residents living in the area are wealthy Chinese,  and they kept their mistresses here.  This could be a reason for the name Love Lane, it goes way back to 1897 as far as maps can be traced. 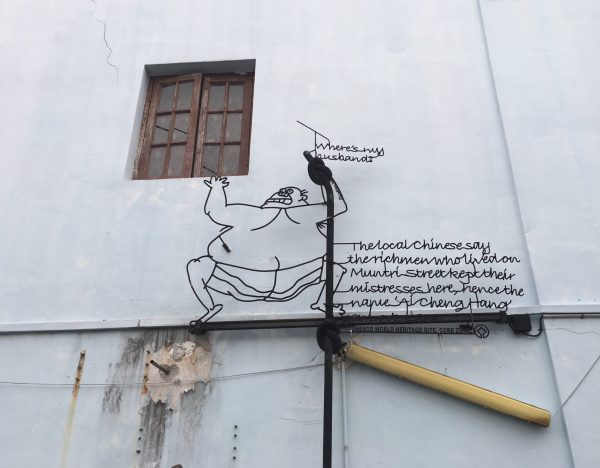 The “Ting Ting Thong”  sculpture commemorates a local delicacy – pebble rock candy and it also brings good memories to the residents of Penang. The name of the sculpture comes from the sound made from the candyman’s chisel, when he was breaking candy into small pieces. 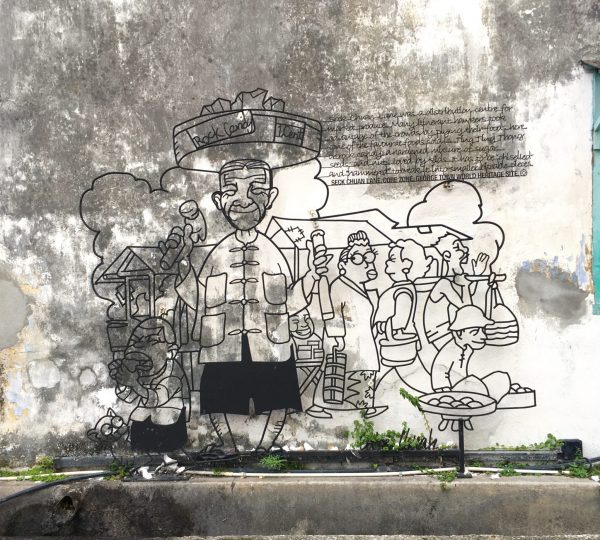 The “Rope Style” sculpture is installed in Rope Walk, where ropes were made in the 19th century. The artist Mun Kian has jokingly replaced the rope making by hair braiding, which is very popular with tourists. 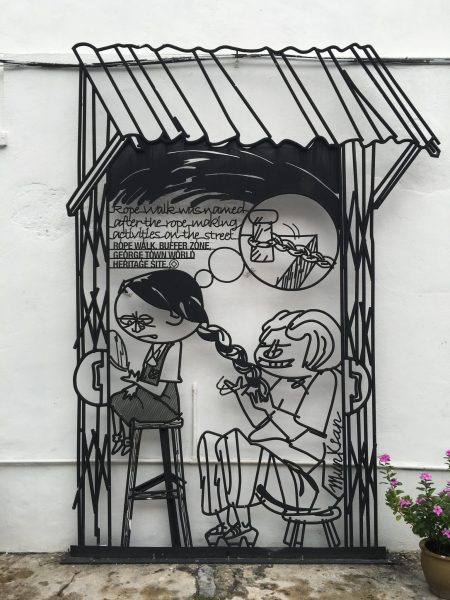 The “Cow and Fish” sculpture shows a butcher catching a cow to be slaughtered while his wife is chasing a cat that stole a fish. 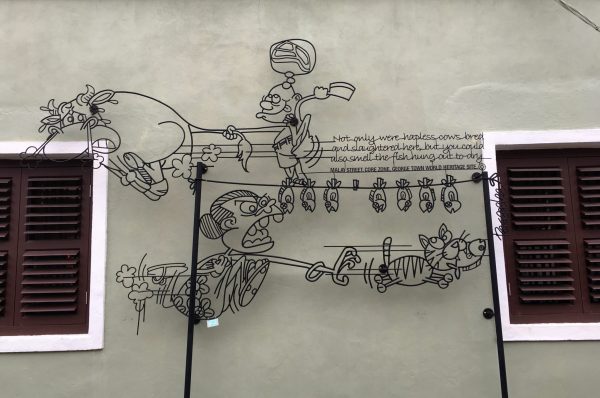 The “Property” sculpture reminds of the time when sailing cargo ships were phased out and steam vessels started to come to Penang. They required a much deeper harbour. Huge work was done to reclaim more land in the last century. But the progress is hard to stop! 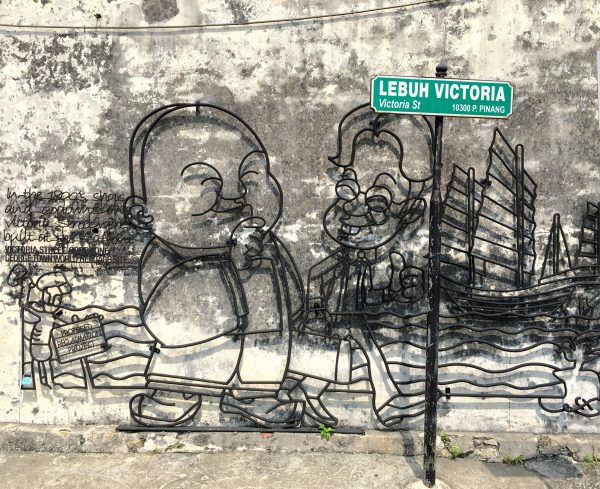 No Free Plastic Bags rule was introduced in Penang in January, 2011. The locals were encouraged to use wicker baskets and paper bags instead. This sculpture “No Plastic Bags” shows a woman, who bought a lot of stuff and she would need a basket to take her purchases home. 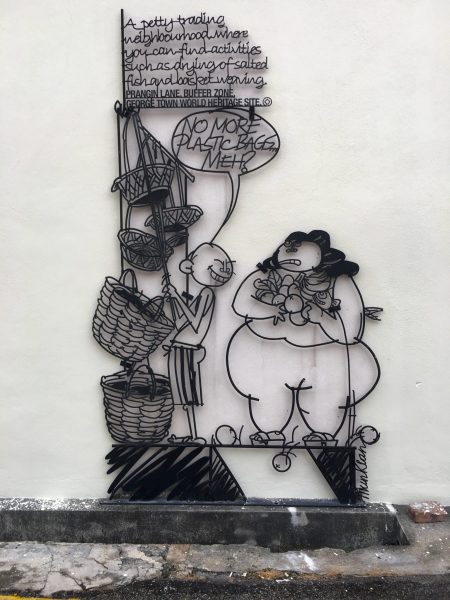 The following four sculptures belong to one group of art work “The Chingay Procession”. 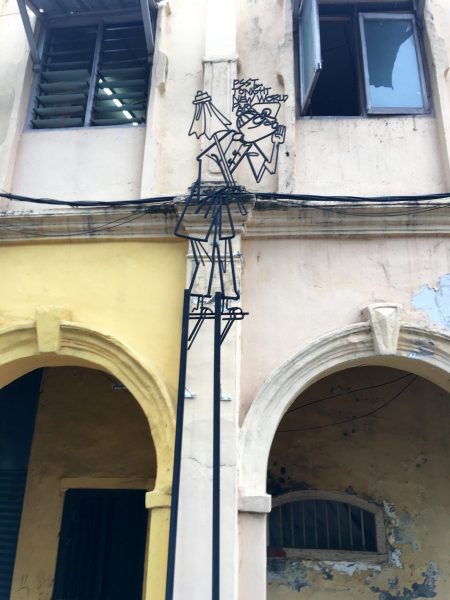 All of them were installed on the pilars of a large shop. The sculptures are based on the chingay – a street performance art believed to originate in Penang.

This is an eclectic mix of characters performing  stunts as they proceed along the street. A man is doing a hand stand, while his sarong is falling over and exposing a lot of flesh. 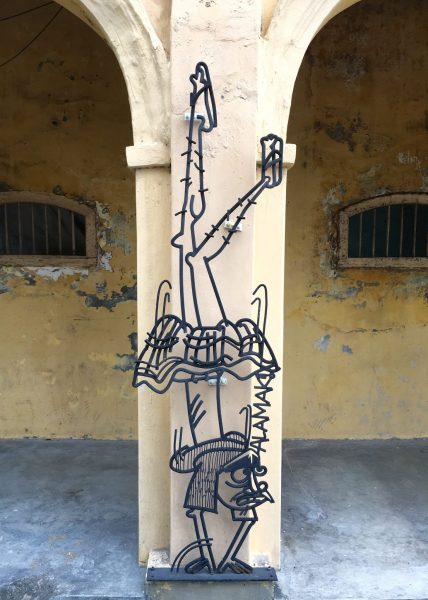 A  young boy doing a handstand on his little bicycle with training wheels. 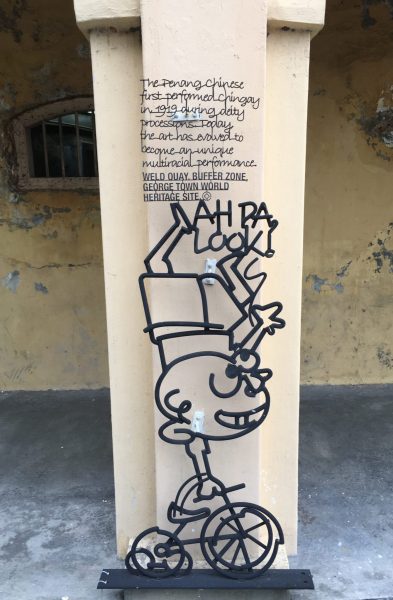 Another one is balancing on a very tall unicycle. 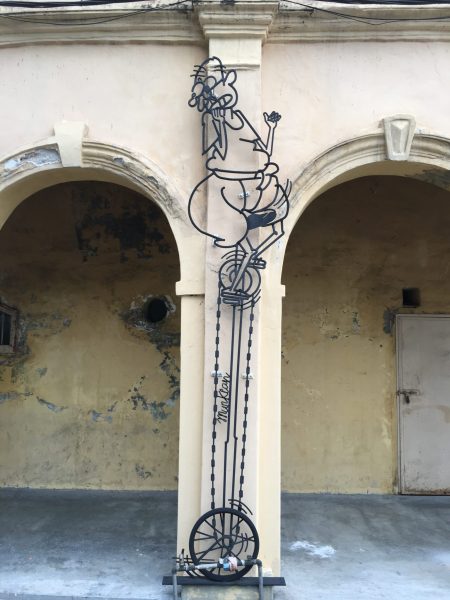 Here we can see a  man with the chingay flag on his head. 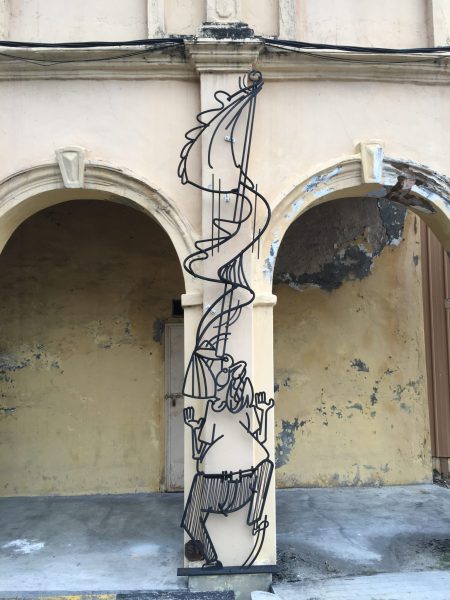 The “Thick, Medium or Thin?” sculpture. The rattan whip (or rotan) was used to punish children. There was a real shop in Chulia Street, where parents could buy those torture devices for their kids. This woman is teasing her son, who has already hidden in a bush , if he prefers thin, thick or medium whip, because his report from school is far from perfect. 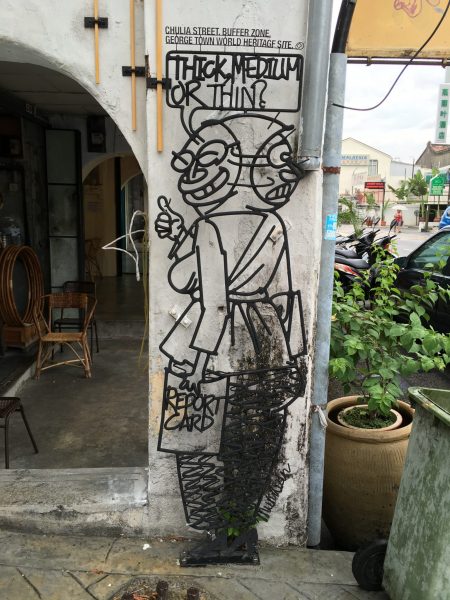 The  “Limousine” sculpture is on the wall in Carnarvon Street. This area is known for Chinese books, stationary, coffins and paper effigies and funerary paraphernalia, which includes paper-and-wood copies of items to be burned at the funerals. There is less and less need for those specific items nowadays and this art is slowly dying. This sculpture shows one not very skilled man, who tries to sell a paper model car. 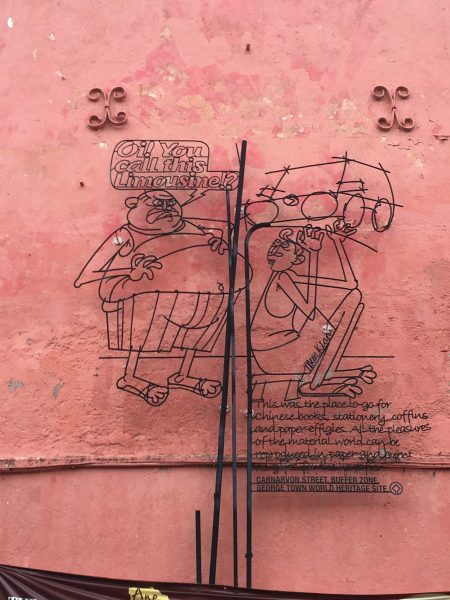 The “Waterway” sculpture tells a funny story about a desperate man, singing for his beloved woman without realising she is married already. Very heartbreaking situation for all involved. Just have a look at her husband!

But it is also about Prangin Canal, which has been an important part of this town. 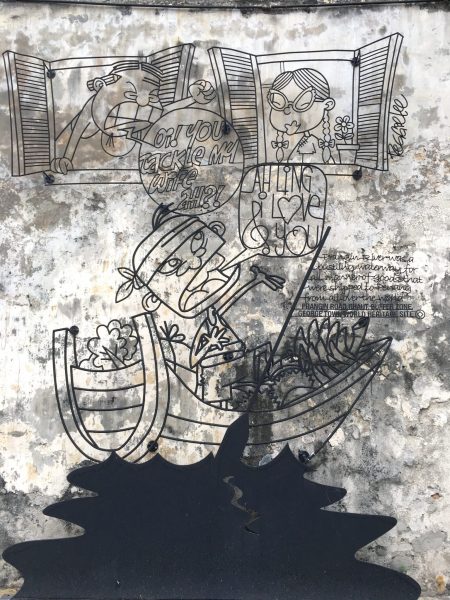 The “Born Novelist” sculpture reminds us about very prolific Malay author who wrote lots of the novels about locals and Malaysian traditions. His mother is being surprised that her newborn has already started writing his novels in his cot. (This is local humour). 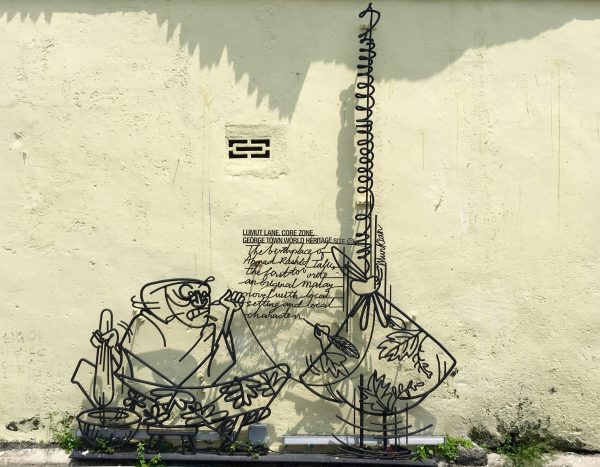 And, finally, the last of my findings. I liked this probably the most.

The “Too Narrow“ sculpture makes fun of the narrow streets in George Town. It shows a carriage, which is too wide, being stuck between the houses in the small street.  A ridiculously happy rickshaw man leaves behind his shocked passenger and runs away free. 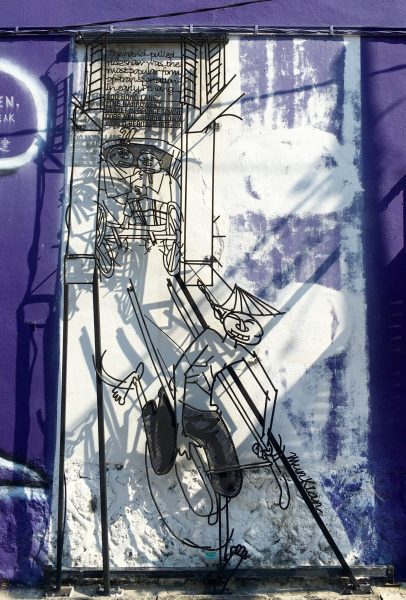 I also wanted to mention that all these sculptures are being lit at night and provide interesting display. They are the great entertainment during the night as well as during the day.

And it is only fair to name those great sculptors and artists. They are Baba Chuah, Lefty, Reggie Lee and Tang Mun Kian. Together they made it happen!