While in Jakarta, I wanted to see the largest mosque in Southeast Asia. It was built after Indonesia obtained its independence. The construction of the mosque took a long time and it was finally opened to the public in 1978. There was some controversy regarding the location of Masjid Istiqlal, but president Suharno insisted on a central location near Merdeca Square. 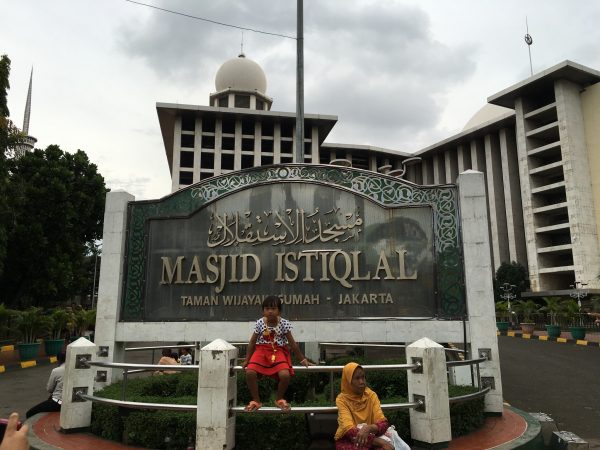 The mosque looks very modern and quite simple. Large, tall, streamline architecture. This place is very popular at any time of the day. 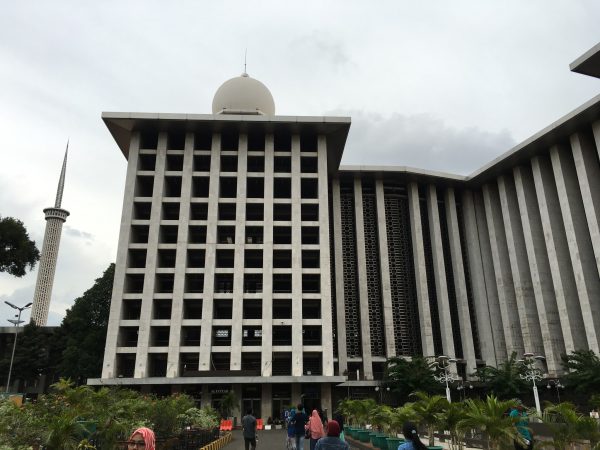 Very pretty street lights decorate the footpath to the entrance. They look a bit out of place, right? 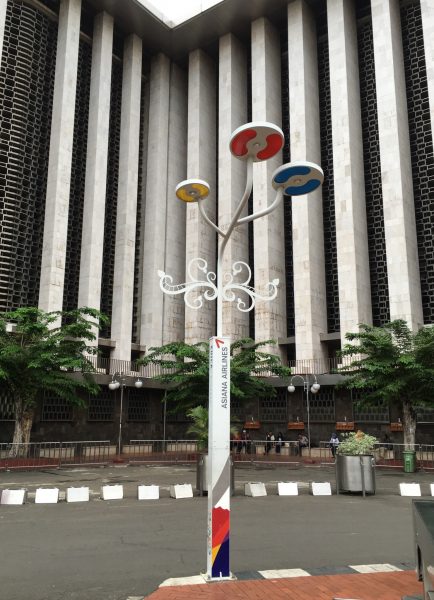 This footpath is the front of the mosque (photo taken from the top). It looks very well maintained and attractive. There is a large fountain at the back, but it operates only on Fridays during special prayer. 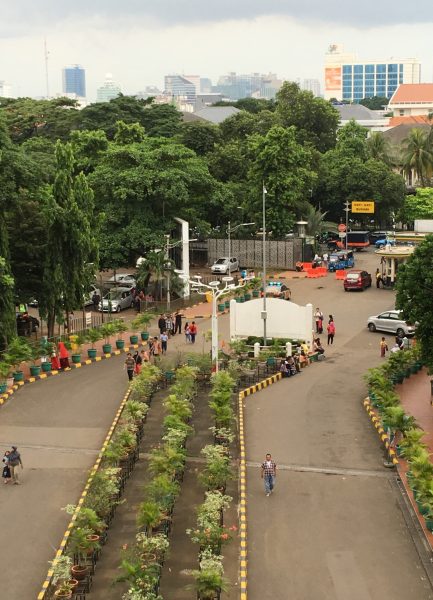 Grand marble stairs take worshippers to the main prayer hall. During service this mosque can accommodate up to 200,000 pilgrims. 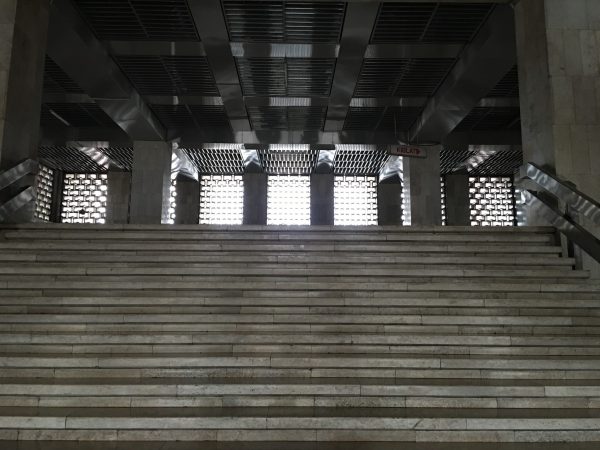 To provide efficient air flow and to cool down the building in the summer heat, these attractive awnings were installed in all passages. 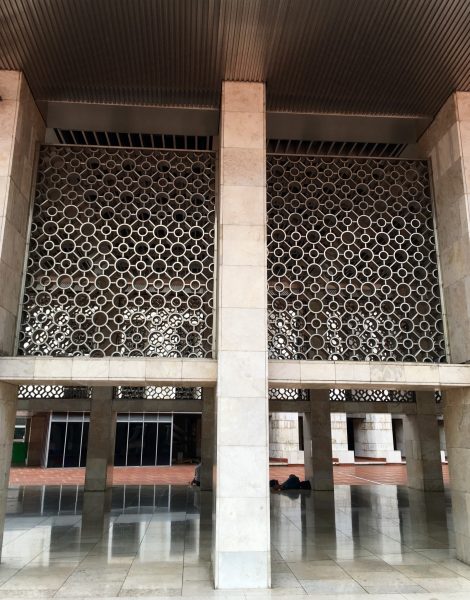 During prayers, those long passages and corridors are full of people. When I visited Istiqlal Mosque it was pretty quiet. In one of the prayer halls it was some type of prayer going on, but the old guy firmly told me in Arabic (I think) that I am not allowed even to catch s glimpse.  I quietly left. 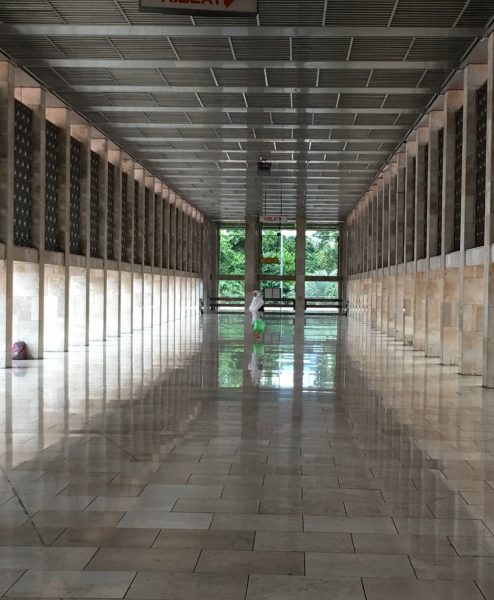 Surprisingly, I felt comfortable there. Considering that I was the only tourist there at that moment, It was a bit intimidating. But a few minutes later I managed to relax and enjoyed my tour. These two young girls were doing their homework and did not pay any attention to the curious western woman. 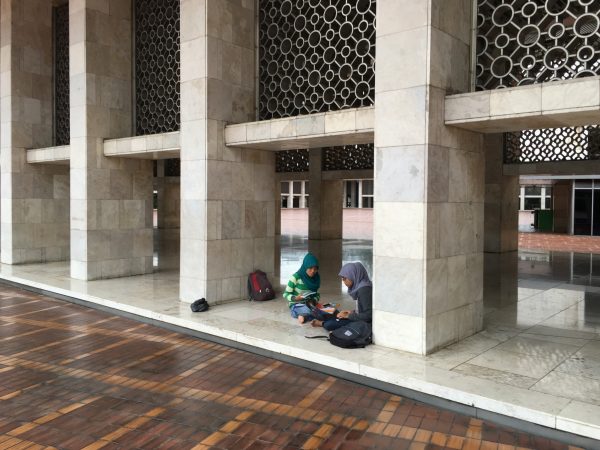 In the southern corner there is a single  minaret, which  symbolises  the divine oneness of God. This is quite unusual, because the mosques usually have multiple minarets, mostly four. The height of the minaret is exactly 66.66m to symbolize the 6,666 verses in the Quran. 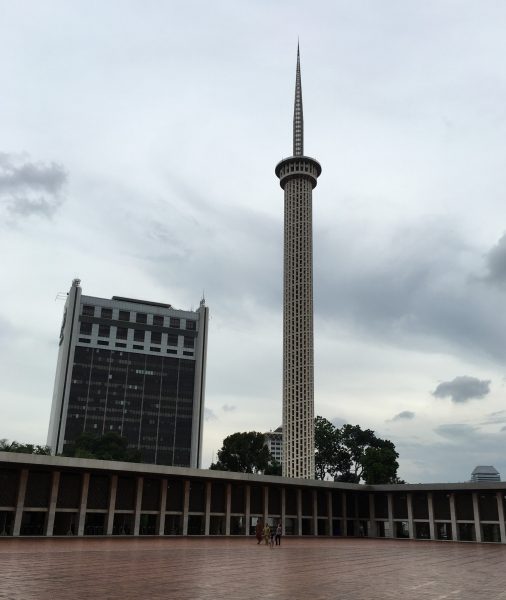 Not everybody in Indonesia was happy with the look of the mosque, as it looks “very Arabic” and out of character comparing to the Indonesian three-domes style. But no doubt this Independence Mosque (Istiqlal means Independence) is a very formidable building.

Imagine my surprise when I found out that Jakarta Cathdral was on the opposite site of the road. As I mentioned before, Indonesia is Muslim country, where 95 percent of people worship Allah. This photo of the Cathedral I actually took from the balcony of Istiqlal Mosque. They literally face each other. 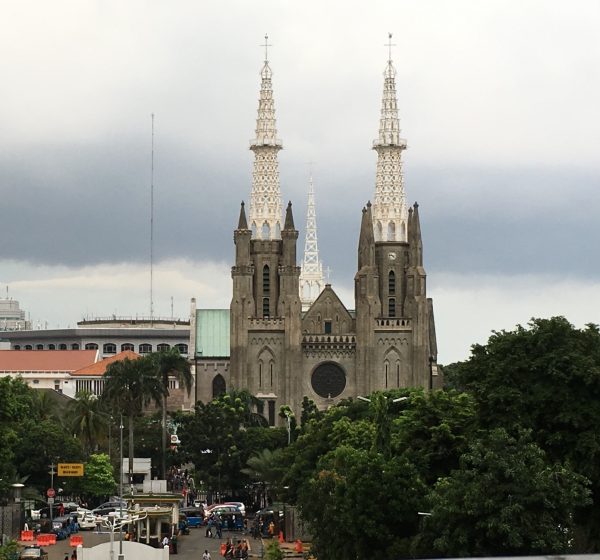 The church was built in 1829. This sculpture is near the main entrance of the The Church of Our Lady of Assumption – this is another name for the Roman Catholic Cathedral. As I found out, the difference between a church and a cathedral is the “cathedra “- the throne of the bishop. I never knew that. 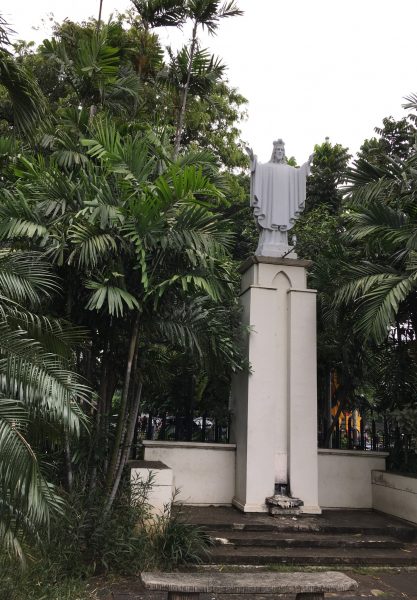 On the southern side of the cathedral there is a statue of Mother Mary holding the body of Jesus Christ after crucifixion. 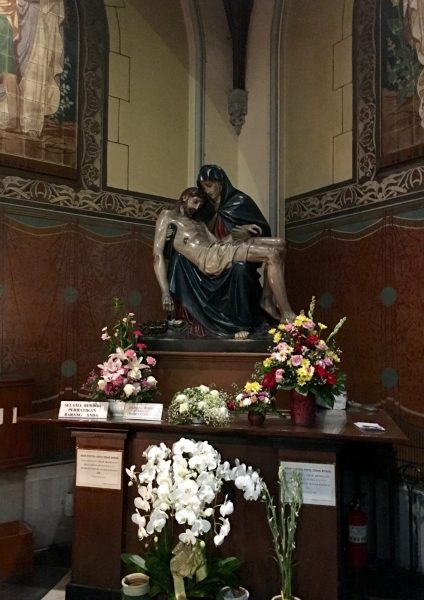 The whole building is built in the shape of the cross. It has a second floor, where originally the choir would sing during the services, but it was transformed into a museum with old religious paraphernalia. 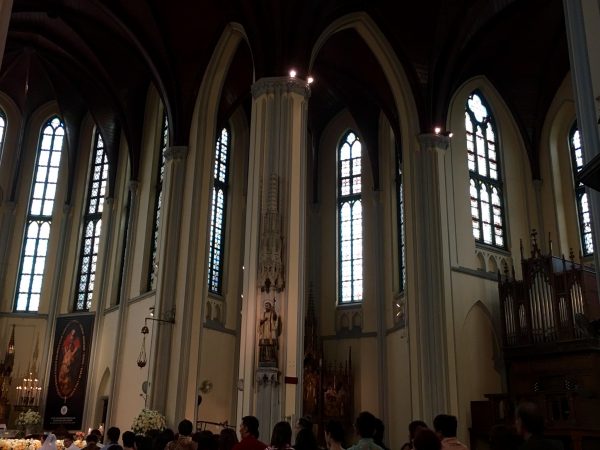 There are three altars at this cathedral. The main one was made in The Netherlands and transported to Jakarta in 1956. 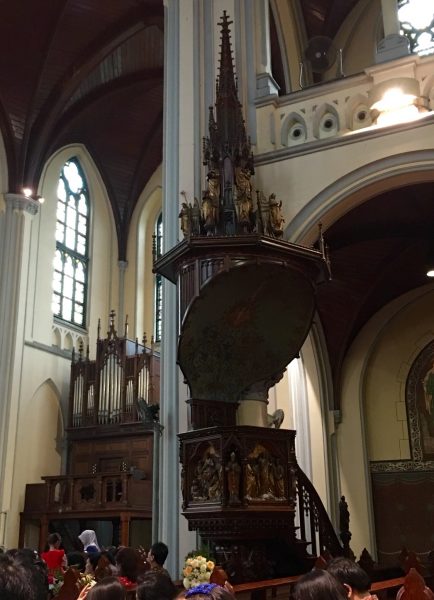 On the surrounding walls there are several scenes depicting the Stations of the Cross. 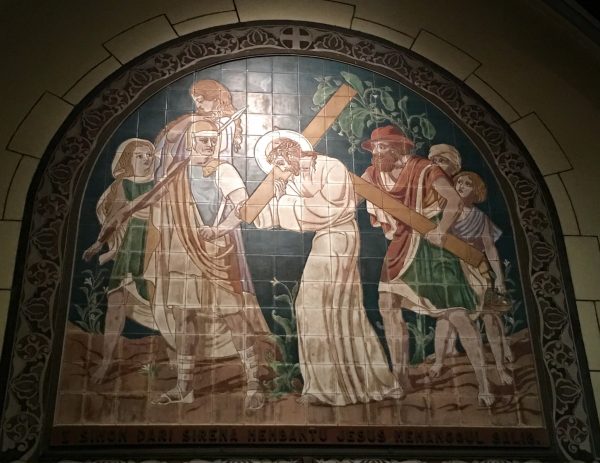 When I entered the Cathedral there were lots of people. Actually it was totally full. Firstly I thought that it was some religious festival. It was a very unusual feeling to attend a Christian mass in an Asian country. I had the same experience in Vietnam, where my friend and I attended Easter Service at Christian Church. 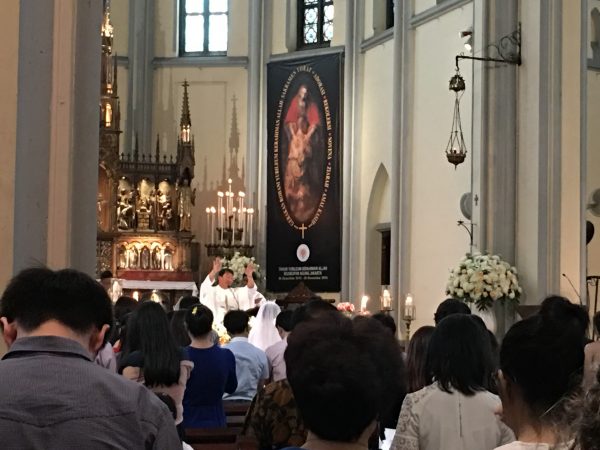 But it was not just a service. It was a wedding! Typical Christian wedding with a bride wearing a white dress! I was so excited. 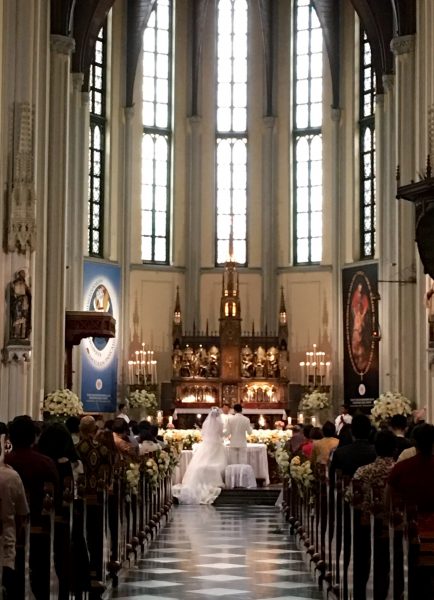 The whole congregation was singing hymns with a priest. The bride and the groom were blessed by the minister and a photo session took a long time. I had to take a photo as well otherwise nobody would believe me. The newlyweds with their parents happily posed for me. 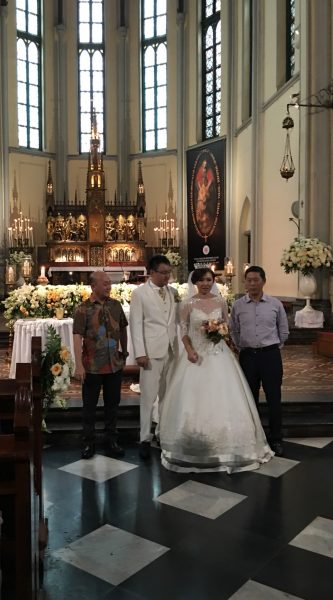 Another surprised waited for me in the front yard. One more excited couple was taking photos in front of the Cathedral. For them the ceremony was all over, they were husband and wife now. To prove the point the young beautiful bride proudly showed me her ring. They both spoke excellent English and we had a short conversation, which finished with exchange of gifts: tiny koalas for the couple and flowers and sweets for me. Not a bad deal I reckon. 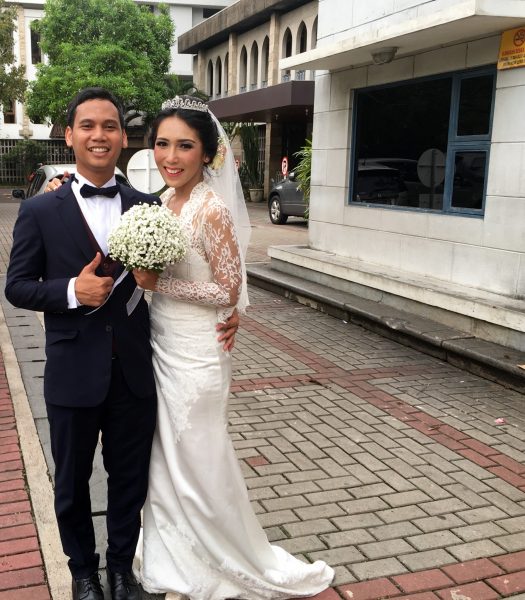 In predominantly Muslim country not only  I found a beautiful Christian Cathedral but also managed to attend two weddings as well. How often can this happen to anybody? So,  am I  lucky or what?

Indonesia, I am coming back for more!!!!