For our little group of three we had 6 guides. Wanda was a head guide, and all the other guys were called assistant guides, but in reality they were the porters. Their job was to carry our supplies, tents, make food and look after us in general. Since I am lazy, I hired one of those guys to carry my tent, sleeping bag and mattress, as well as the main part of my belongings (it was an extra charge).

The porters were young and strong. One of them – Dani (in the middle) – was assigned to me and my needs, while the last guy in the photo – Joye – carried all food. His bag was 35 kg when we started. Lucky for him on our first day we gave all our bananas to Mina, one of the orangutans, just to pacify her. Joye’s load became significantly lighter straight away. 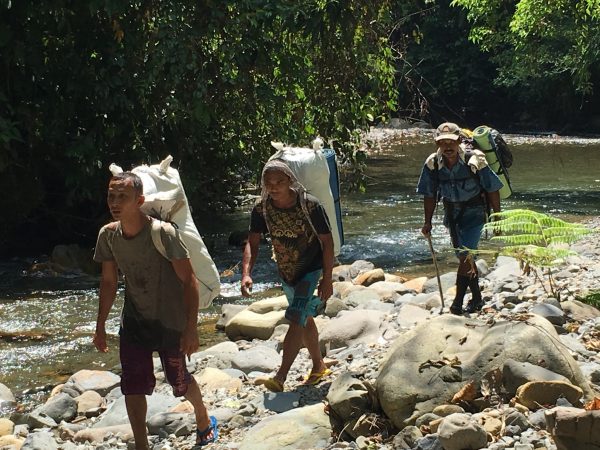 The porters had to provide our accommodation as well. In general, bamboo frames are built well before and repaired as needed. One time we arrived at a camp site, but it was already taken by a group of the Rangers. So our guys had to build a shelter from scratch. It took them about 1.5 hours. 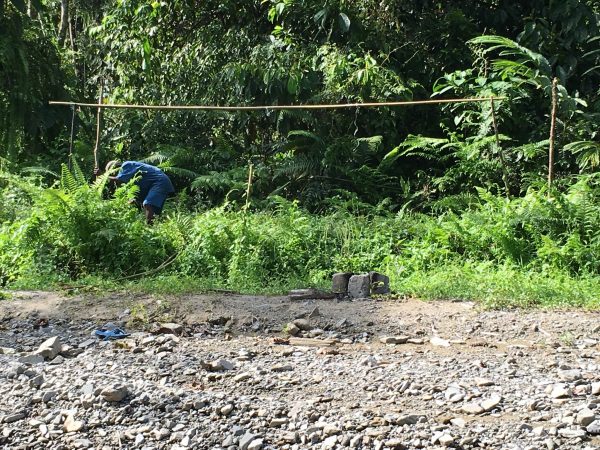 This is how our shelters look like. A piece of tarp on the ground, a huge piece of heavy duty plastic wrapped around a bamboo frame, two tents inside – and dah-dah – our accommodation was ready for the night. 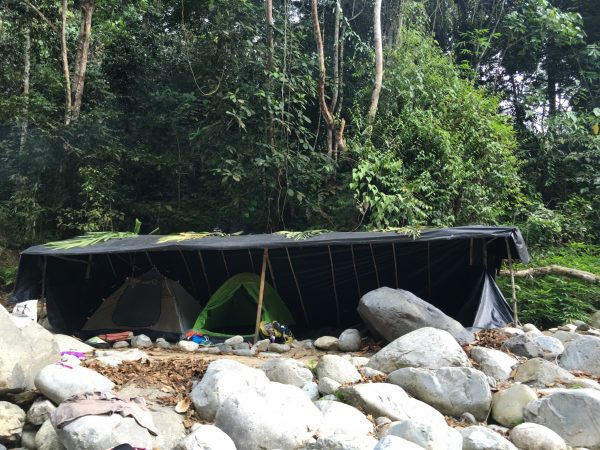 A similar structure was built nearby. It was a kitchen and sleeping “quarters” for the porters. Everyone of them could make a decent meal very fast. 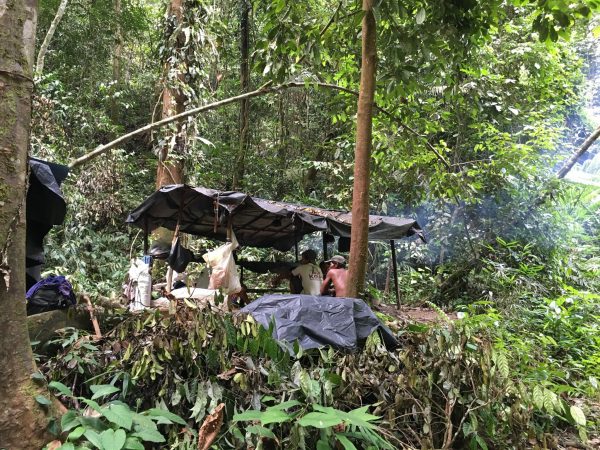 Kitchen utensils, cutlery, plates -all washed in the river using sand and soap.

My porter Dani did not mind posing with a wild taro plant. I just wanted to show the huge size of the leaves. Everything grows like crazy in jungles. 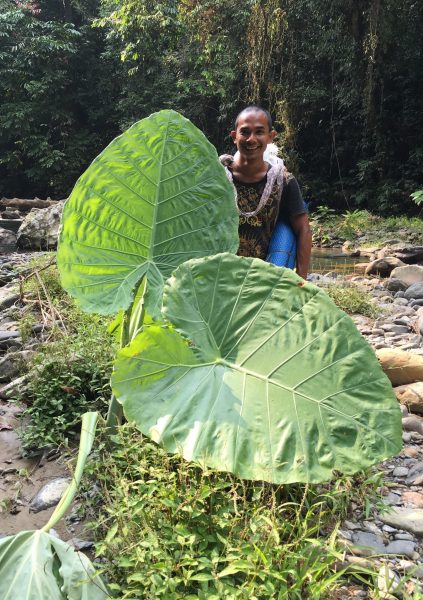 On the way, we found a place where strong vines were growing over the deep part of the river. Dani decided to show us how to play “Tarzan goes for a swim”. Everyone joined in, including Wanda. I honestly believe that Wands went back into his childhood days while swinging, screaming and splashing. 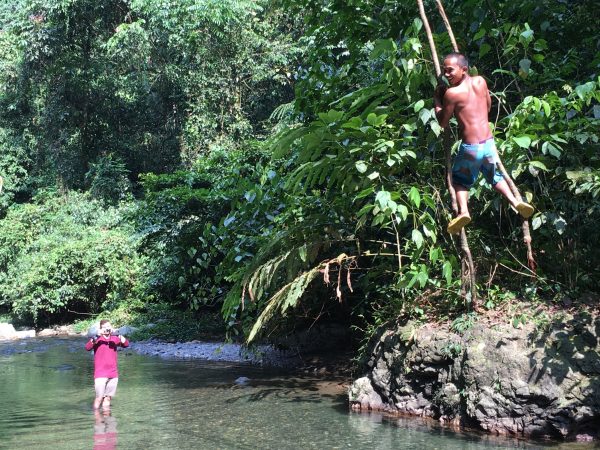 On some nights the guides wanted to supplement our ration with fresh fish. On the photo below, Wanda is preparing fishing equipment. These are short wooden sticks with lots of nails. Medium length fishing line with hooks attached to the nails. After putting worms on the hooks, Wanda took those “fishing rods” to the places where many rocks would make small lagoons. He put the rod on one large flat rock, another large rock on the top and left the whole assembly for about 2 hours. Later, in complete darkness, using a head torch he went through all his secret places and brought about 15 catfish. We had them for breakfast with rice. 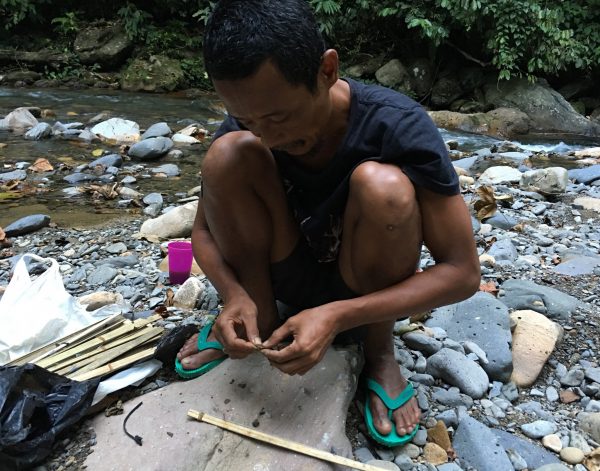 Next day during lunch break the guys did some net fishing. They would stretch the net, dive under the rocks and dredge the net along the bottom. I must say that this method was much more successful than fishing with sticks. 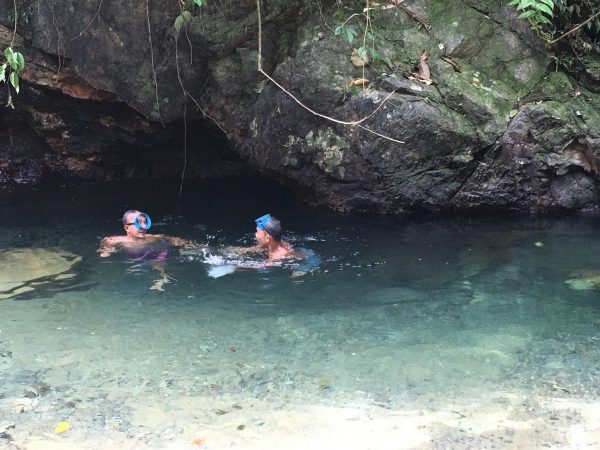 In about forty minutes we had 37 fish. It was something similar to a cod. I love fish, so I indulged as well, especially because I knew that this fish was really-really fresh. 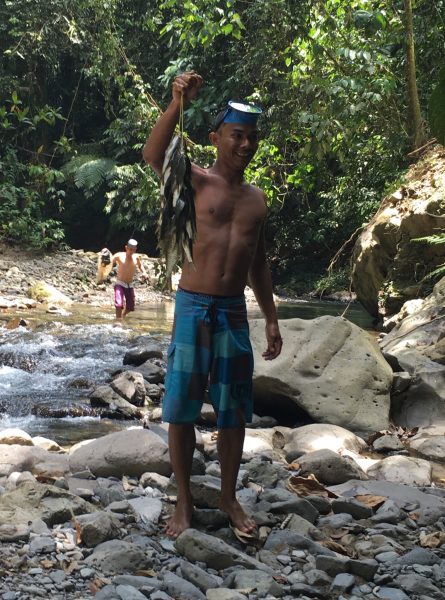 Wanda took us on foraging trip. We had to collect enough jungle vegetables to make a dinner for all. On this photo Wanda explained how to treat a cataract with fresh ginger juice. I know, it’s almost impossible to imagine squeezing ginger into the eye. But Wanda had cataracts on both eyes and could not afford an operation. So he spoke to “the medic” in the town (actually it was a shaman, no formal medical education whatsoever) and that “specialist” recommended to find a young ginger plant and squeeze juice into both eyes 3 times a day. Wanda felt like his eyes were popping out because of such intense pain. He continued for a week and surprisingly it helped. He has perfect vision now. 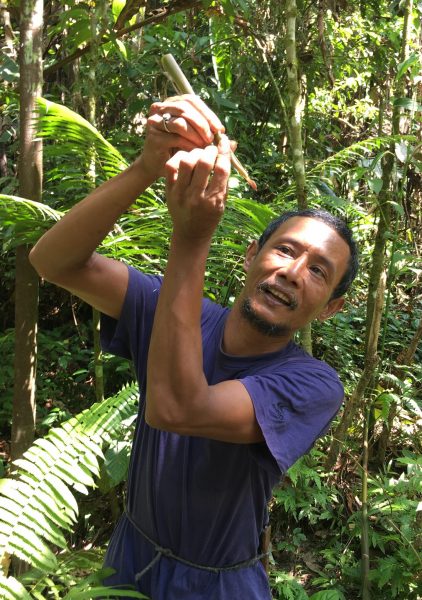 This is a young banana flower. Outlet guides cooked curry out of it later. 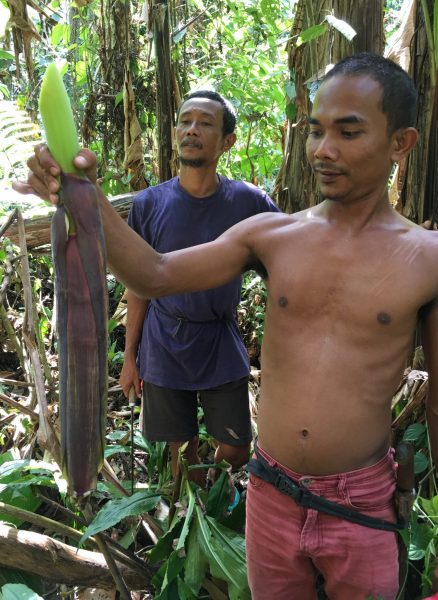 In this photo Dani was trying to get to the marrow of banana plant. 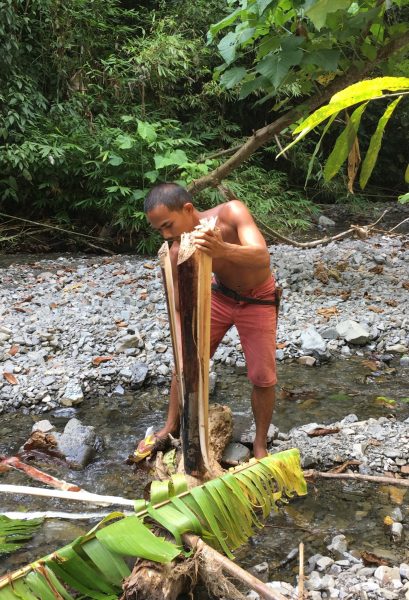 Banana plant has a very sticky juice, which keeps each of the small marrow pieces “on the string”. 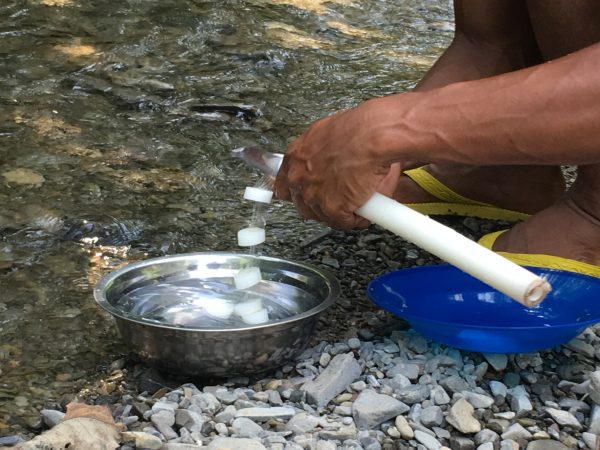 We also got ginger flowers and I helped to clean them for our dinner. Joye made a dry curry with lots of spice and chili using all vegetables and flowers collected during our trip. 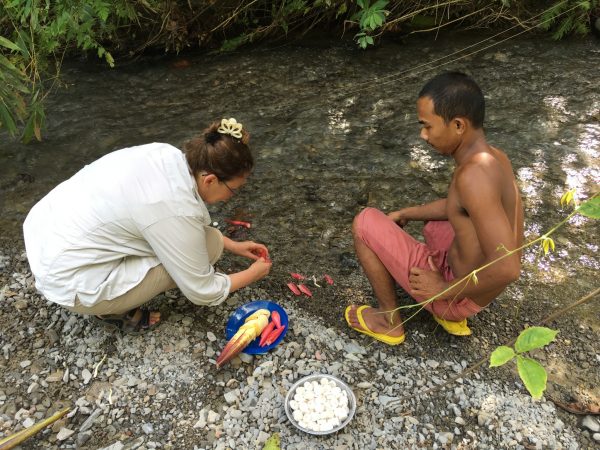 Lunches were cooked in the morning and served in the jungle. For plates we used banana leaves. Very authentic. 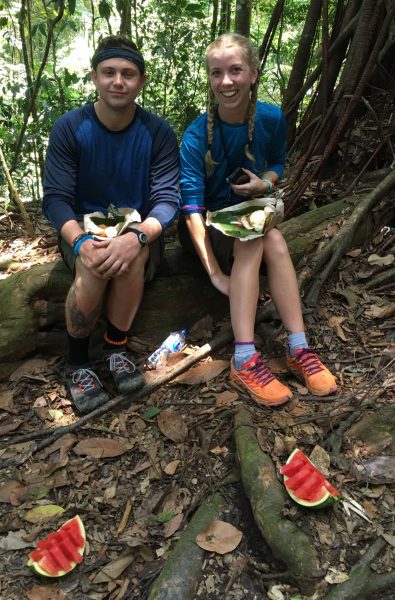 Usually we had fried rice, fried egg or omelet, some salad and crackers. 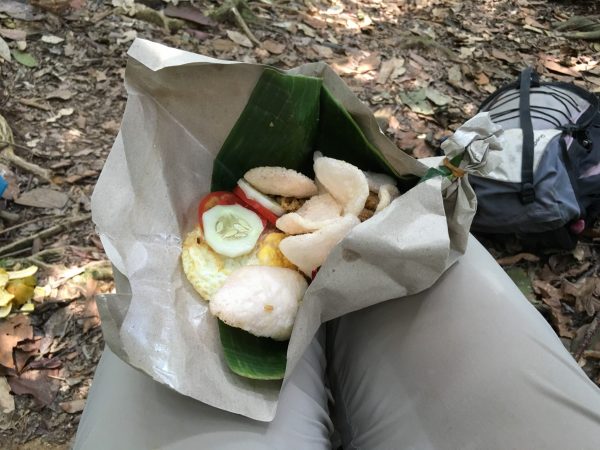 Dinners were served in a more formal way. Guides would spread a plastic sheet, which was supposed to look like a table cloth. Food was presented to us on plates. 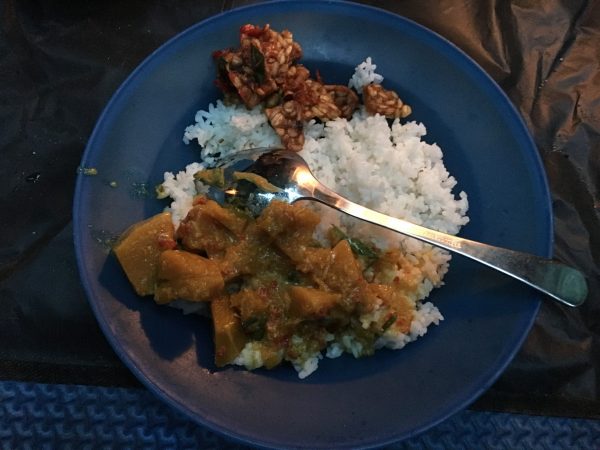 A romantic atmosphere cannot be complete without candles. I am not totally sure if there was any intention to make our meal more romantic or not. But I could see the practical side of using candles during dinner:  so we could put food into our mouths and not somewhere else. 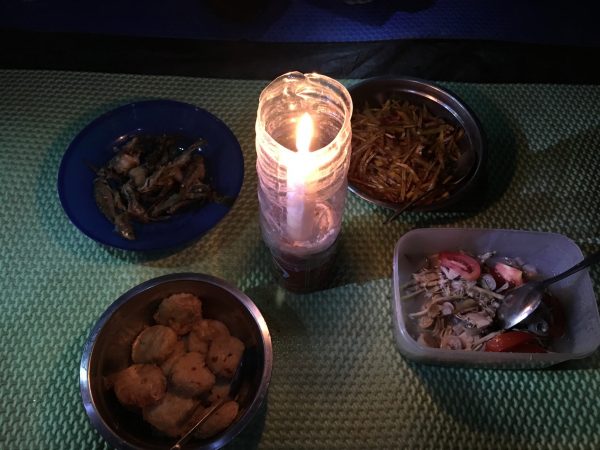 As I mentioned before, I am getting more adventurous and bold with my food. I don’t have problems with eating in tiny horrible-looking shacks, corn roasted on the side of the road, food served on the old dirty newspapers. But in Sumatra I reached another height: I can eat jungle food from banana leaves.

I wonder what will be next!!!