So, our adventure started from boarding the Air Asia plane in Melbourne. I did not have a good relationship with this company because they had stuffed up my tickets to Sri Lanka. To cut this story short I had to re-arrange my plans very quickly. Luckily, I found a great offer to go to the jungle in Sumatra to track orangutans and tigers (ha-ha, this is my ultimate goal in life). 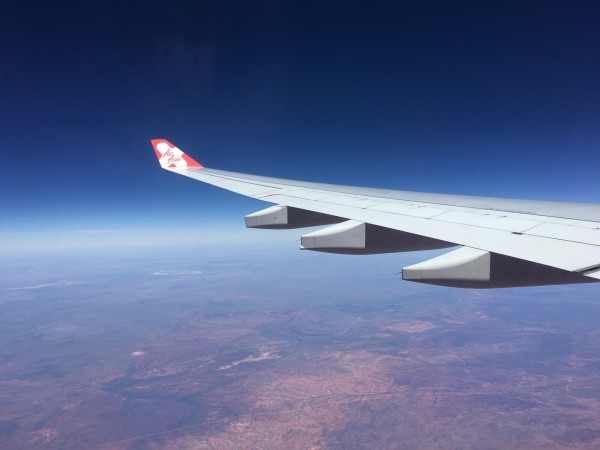 Air Asia is a budget airline, and because I was  too stingy to pay for a decent company I  had to deal with a window seat (I feel trapped there), horrible food and having to pay for water.

Otherwise the flight was ok and we were in Medan on time. There, as arranged, Hotel Cordela sent a driver to pick me up and my adventure began. 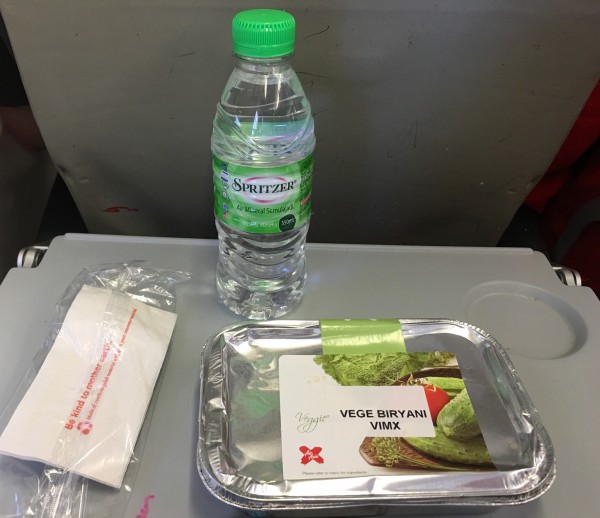 The hotel was very average: small room, no windows, very dim light. But have a look at what was on the menu: main course Internet Cordela. Of course, I had to have this dish. Now I can say that I consumed internet in Indonesia by all means. (It was just 3 minutes noodles with boiled water and a few pieces of Asian veggies on top – not very nice). 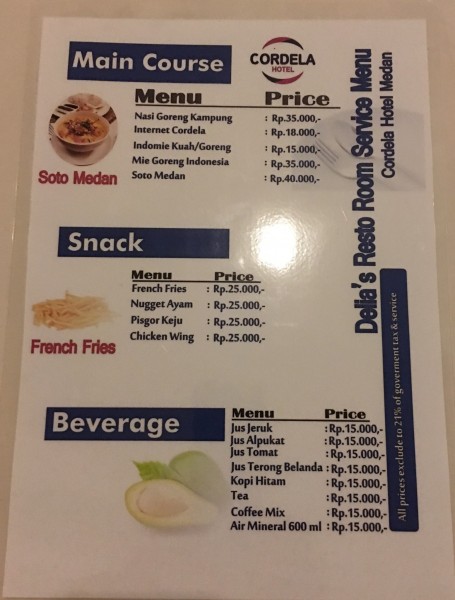 It was just 3 minutes noodles with boiled water and a few pieces of Asian veggies on top – not very nice. 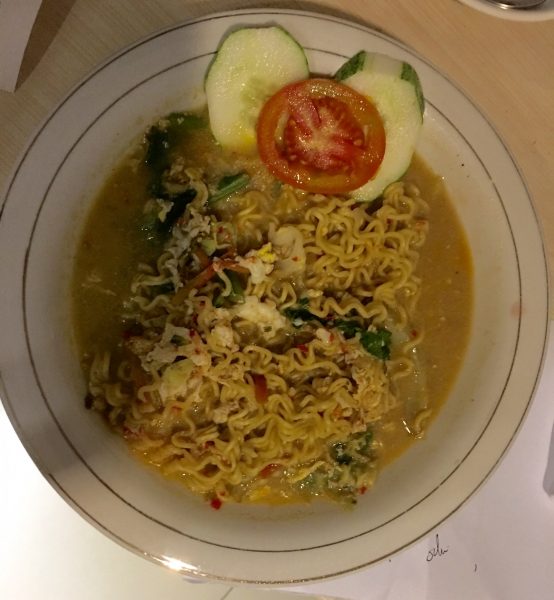 The breakfast at the hotel was much more interesting. The food was Indonesian, which was fine with me, but not much variety. I never eat meat overseas, so I went for a safe option of noodles and eggs.

Except…..the eggs were raw. Quite a surprise. Apparently, there was a girl, who suppose to cook eggs to my liking, but she was away in the kitchen when I walked in. Probably, cooking eggs for someone else. Anyway, we both laughed and she made me an omelet. 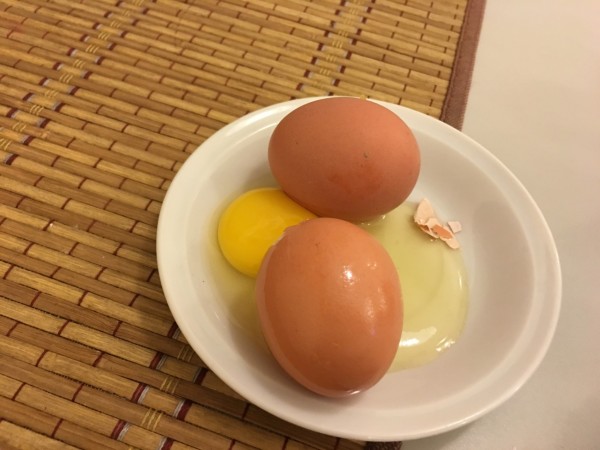 The only interesting thing in this hotel was an elevator. I was really fascinated by my reflection in the mirrors which was multiplied to infinity. 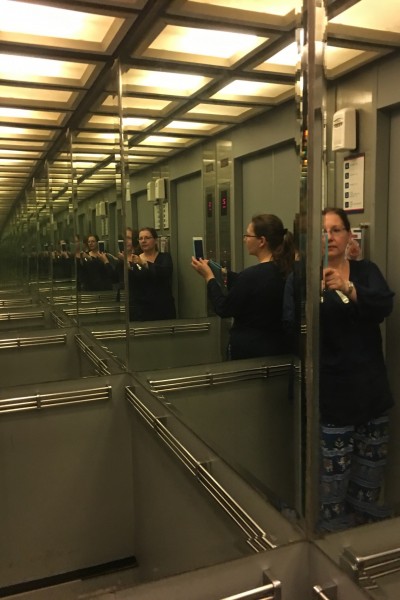 After breakfast, Murad – the head guide -and a driver picked me up from Hotel Cordela and we started our long trip to Bukit Lawang. I arranged to visit a few interesting places in Medan on the way (extra cost US$25). The first place on the list was The Grand Mosque Al-Mashun. This mosque was built by the Sultan of Deli (nothing to do with New Delhi in India) and is still used by Muslims for daily prayers. This historical building is under government protection. 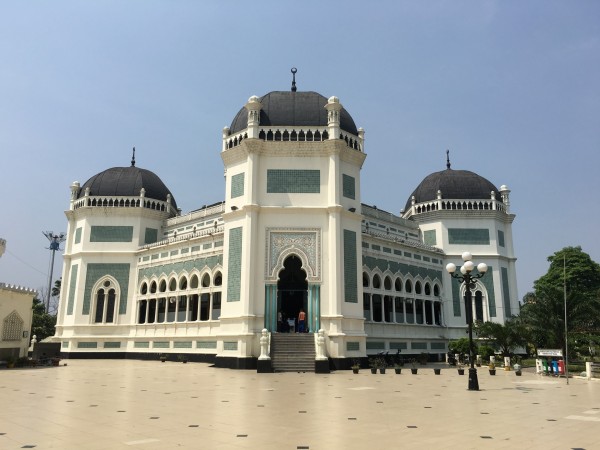 When we arrived there were a few people preparing the mosque for the midday prayer. Surprisingly, I was allowed to walk inside. Maybe because I am a foreigner, don’t know. 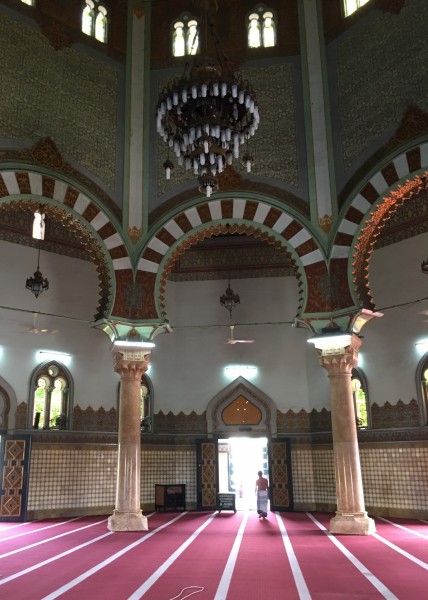 Beautiful architecture and attention to details. 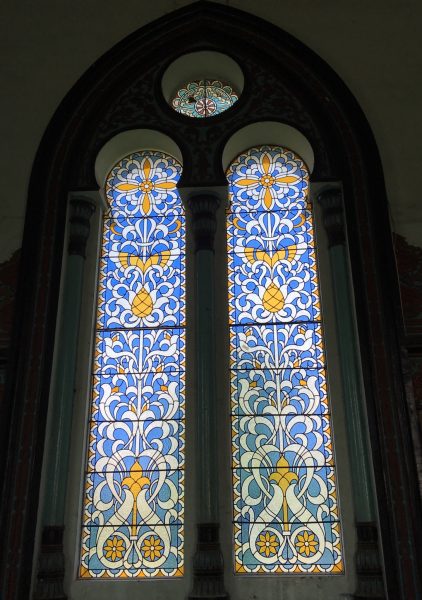 From these stairs the mullah  reads the Quran to the men. Women are not allowed to attend the mosque during prayers. Apparently, they are supposed to pray at home, because “it’s better for everyone. Women can cook, look after the kids, wait for the husband and pray” . This is how Murad explained this situation to me. 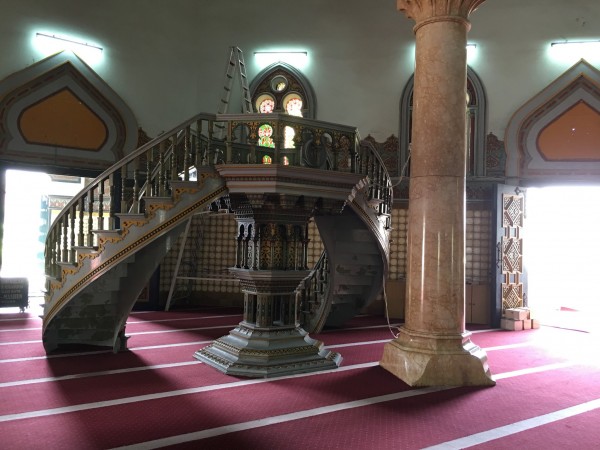 While I was looking around and taking photos a small group of school kids approached me and asked a few questions. The guy on the right read those questions from his notebook, the girls only listened. It was quite interesting. I liked their courage. In the end they asked for a photo. How could I refuse? 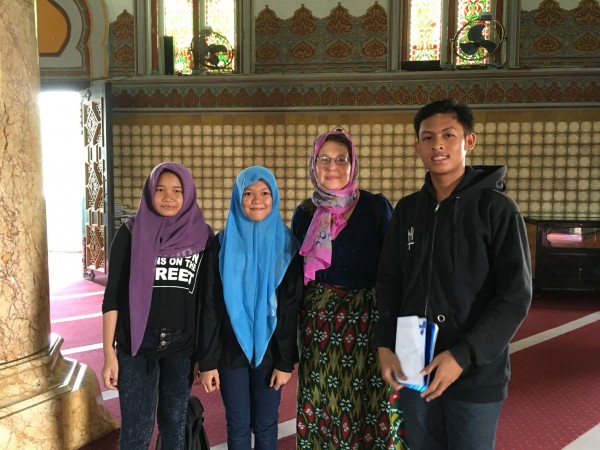 And this handsome man was sitting near the stairs waiting for a service to begin. He was a retired school teacher who could speak English. We chatted for a while and he wanted to take a photo. No worries. But after he gave me his business card and asked to send the photos. And he did not have an email… So, I have to print and post him the pictures. 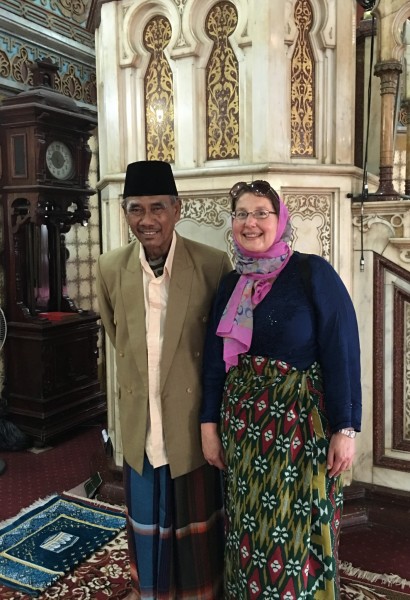 Nearby, at the mosque, there is a cemetery of the Sultans and their relatives. The land belongs to the Grand Mosque, therefore the graves will stay there forever. In case the Royal bodies were buried somewhere else, that land could be sold or acquired by the government and the graves would be destroyed. 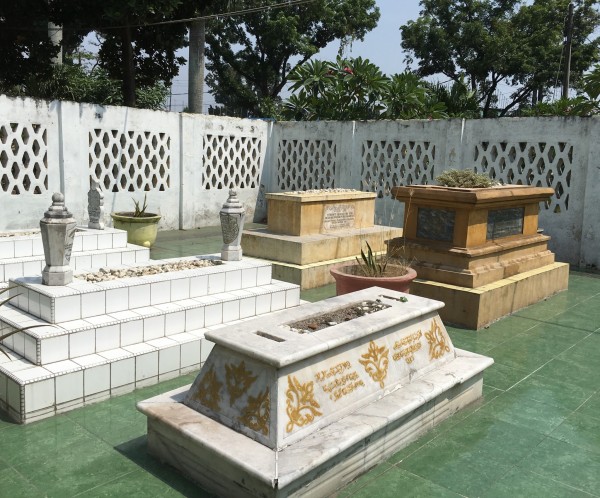 Looking at the size of the cemetery, there were quite a few Royal relatives. 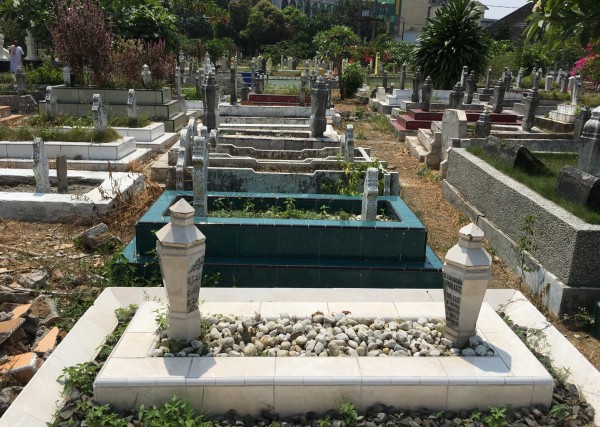 After that we headed to Maimoen Palace, which was built in 1906 by Sultan Ma’Moen Al Rasyid Perkasa Alamsyal. 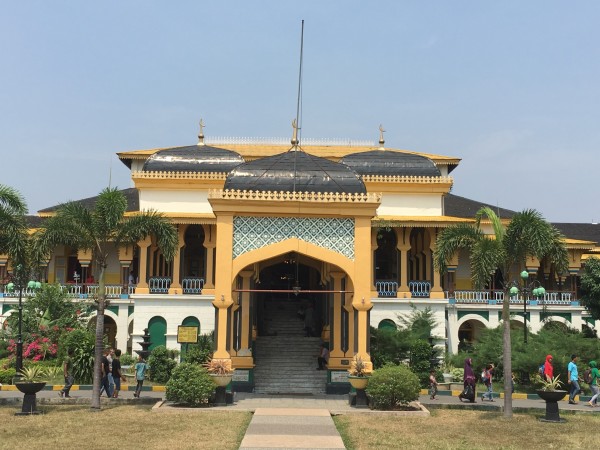 Yellow is considered to be lucky in Indonesia and that’s why everything is yellow and gold. People come to this Palace in large numbers. Considering that I arrived on Easter Friday (public holidays), the place was full. These beautiful girls came with their parents to learn a bit of their history. They are soooooo cute!

Despite Indosesia having the highest Muslim population in the world, they acknowledge Christian and Buddhist holidays out of respect.

Outside, the small band was playing a traditional song. The guide translated it to me.

“They sing about that if you have a short fishing rope there is no hope to catch a fish in the ocean. We can estimate the depth of the ocean, but how do we predict depth of someone’s heart.” 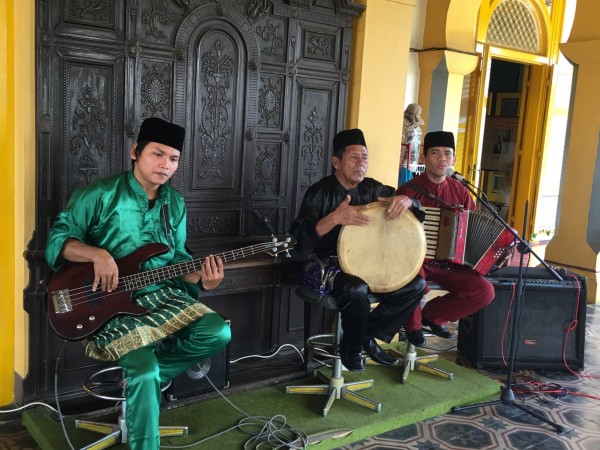 Near the Palace was a tiny flimsy shack, where worshipers kept a small cannon. The story goes like this: “Long time ago one queen turned herself into the cannon to protect the kingdom. People from the high country sent a part of the cannon to the Sultan. They believe it has a spirit”. 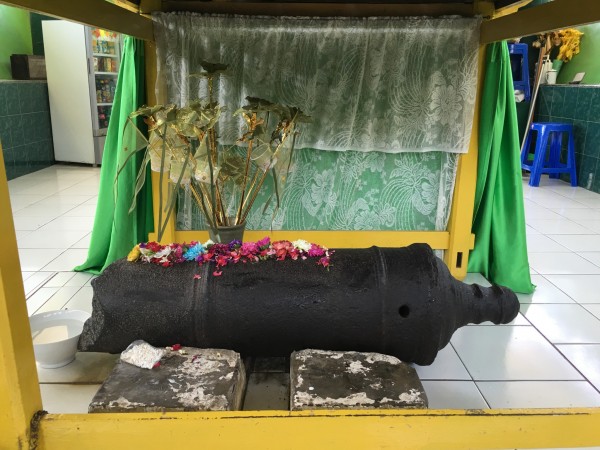 People come here and whisper to the cannon their most intimate thoughts. They believe that this cannon is so powerful that their wishes will come true. 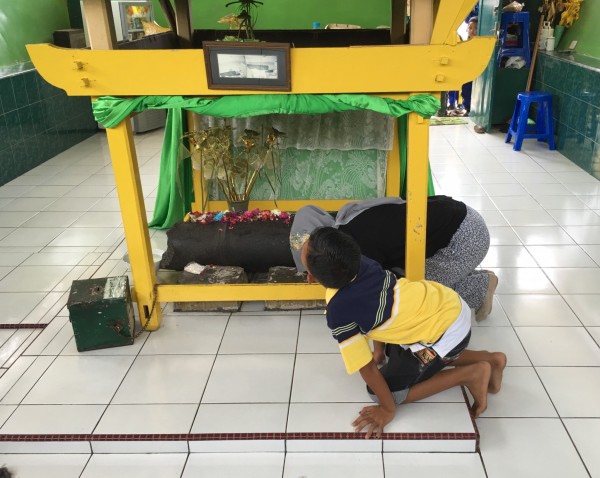