The next big thing on our list was Dwarka. This historical place is as famous as Varanasi and probably as old as well. But to get there we had to travel for 8 hours  – that is how long it takes to conquer 350 km in India. And this is on the good roads and with clear weather. 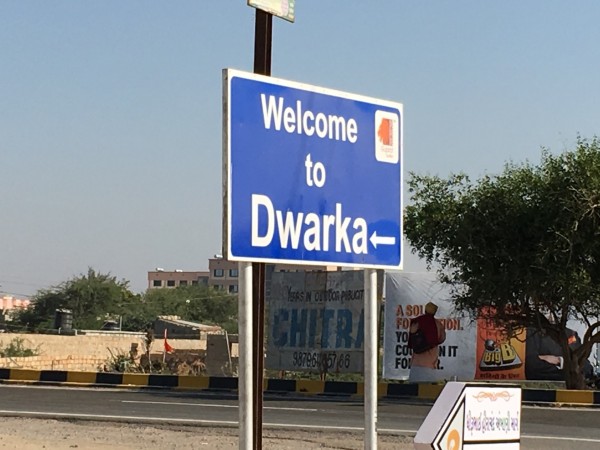 Even a small lotus pond on the way was entertainment. And the lotuses were just beautiful.

In general, I don’t consider cows even a little bit intelligent. And we don’t expect them to be smart, right? This great specimen was very surprised to see a foreigner on his home ground. He was standing there processing this bizarre information. We decided not to wait for his conclusions and ran to the car totally defeated.

We were in a big hurry to get to the ferry, which was leaving at 5pm. This was the last ferry for the day and we wanted to get to the old Dwarka temple – just to see that inspiring place after our long ride. We made it on time – surprise, surprise – but in the end we opted for a private boat due to the huge number of people waiting for the ferry. The boat was exactly 50 times more expensive, but quick and comfortable ( 20 rupees vs 1000 rupees per person). 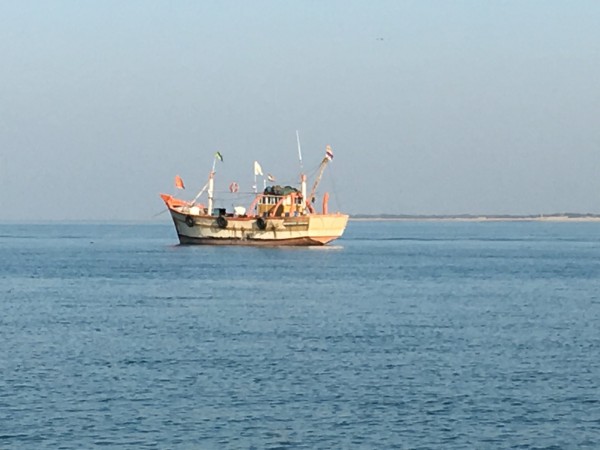 It was a very pleasant ride.  If only we could forget about the long and heated argument with our stupid travel agency regarding our hotel, food and itinerary.

Near the shore there were lots of colourful fishing boats in total disarray. 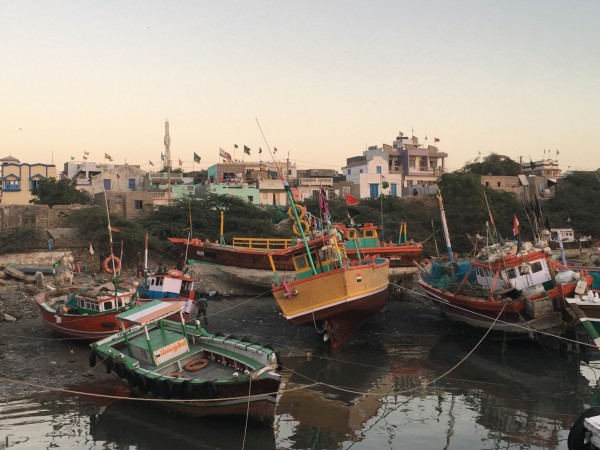 I slightly misunderstood Sangeeta and was expecting to see an original temple, which was built more than 5000 years ago. However, to my great disappointment, that temple is under water, and the new one was built 150 years ago. It is a very spiritual place, but as a temple… I’ve seen much better ones. Quite a few walls are under repair, so there was lots of rubble lying around.

This temple had a strict “No Photos” policy, so I could not take any. And the ushers are very vigilant there. When we left temple grounds Sangeeta asked me to take her photo. And even then there was one guy rushing towards us to stop me. But I was quick. So here is the evidence that we actually went there.

It was getting dark when we were leaving the island. A beautiful sunset and the fishing boats -looks like an idyllic place. 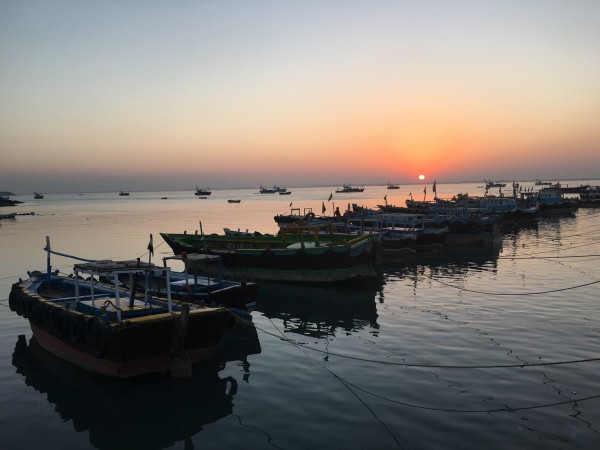 Our driver took us to the Nareshwar Temple, which is the 6th jyotilinga-energy centre of Shiva consciousness. It was totally dark by that time, when we finally arrived to the temple. From afar we could see the huge statue of Shiva towering above the country side. It was cleverly lit by huge projectors with constantly changing colours. 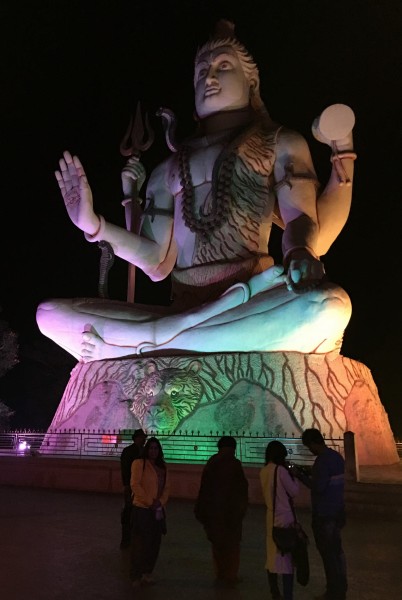 Inside the temple it was really spacious and surprisingly simple. I walked around looking for something special while my friend was talking to priests. 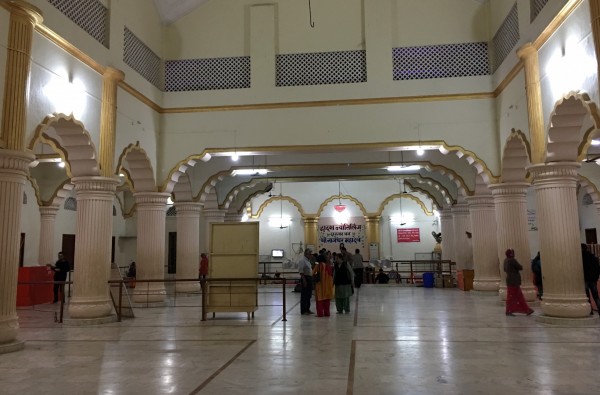 As always in Shiva temples, there was a Nandi the bull. He was supposed to carry worshipers wishes straight to Shiva. Obviously, all the wishes were fulfilled for the moment,  as the bull was resting alone. 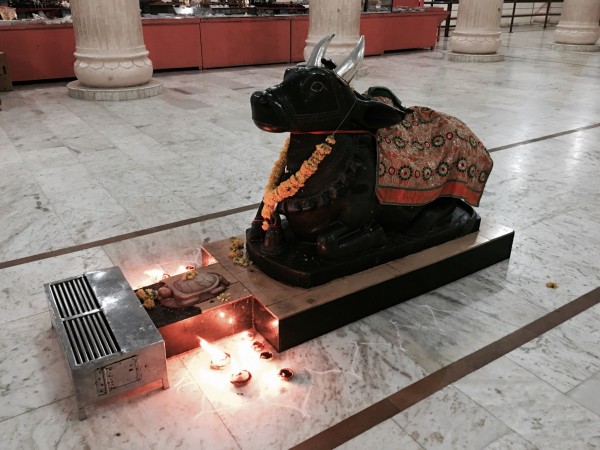 My friend had some secrets to share, and the bull was very understanding. I swear he was nodding his head in sympathy, while listening to Sangeeta. 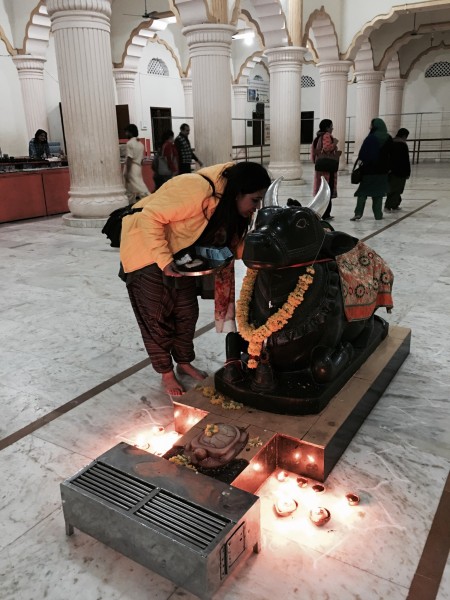 And this is a special place where private poojas take place. Sangeeta wanted to have one and invited me to participate. That was a mistake. I could not take my camera out under the stern eyes of the priests.

Finally I saw Ganesha’s sculpture. I was very excited, like I had seen a long lost friend. Ganesha always looks cute and cheerful. 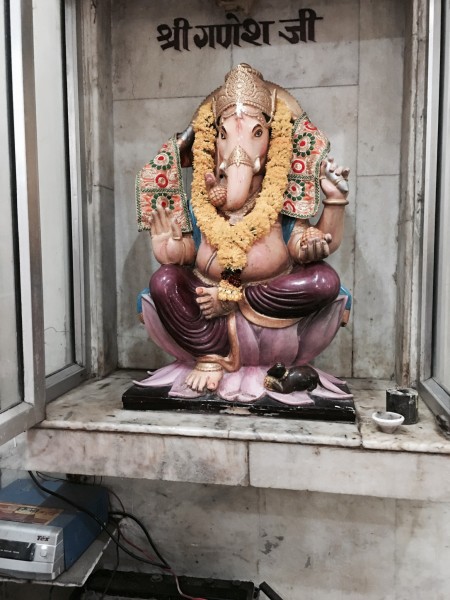 On this poster all 12 holy places of Shiva consciousness are displayed. By now I had already visited 3, while Sangeeta had been to 4 places. So I am not far behind. I think I am doing pretty well for a foreigner. 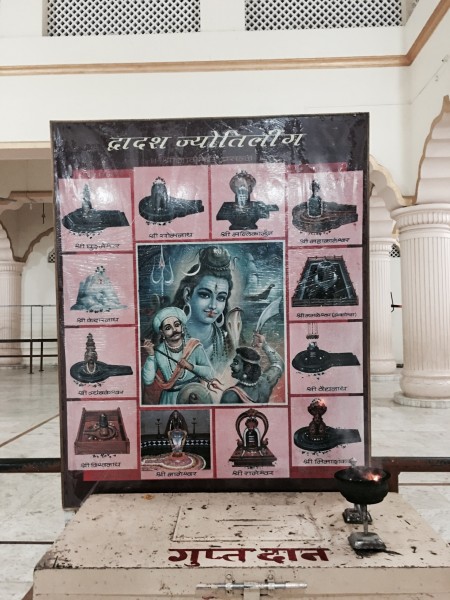 This is a floating stone at Gopi Talab. It’s really interesting: a real stone (looks and feels like one) locked in the cage. There is also a small water well, where this stone is floating. For 50 rupees people can pour a cup of water on this stone and admire it’s funny bobbing up and down in the well. 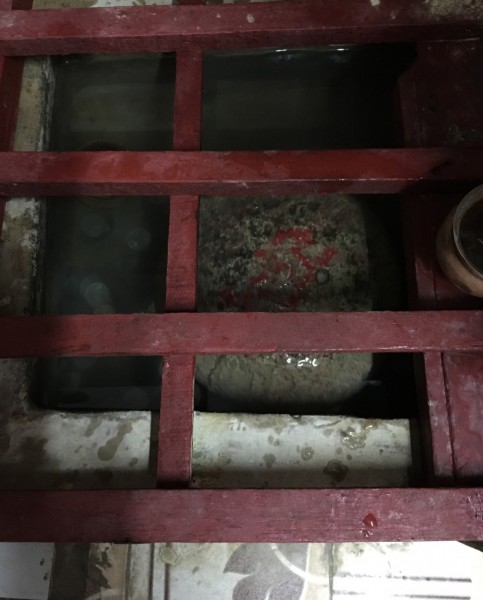 This was a temple near a pond, where all Gopis (girlfriends of Krishna) had bathed with Krishna and left for the heavenly abode. After that delightful event, the pond dried out and the locals developed a new business of selling “the healing mud”. Sangeeta bought enough mud to cover both of us from top to bottom.

The next day we came to Dwarkadeesh temple, which is an important Energy centre of Krishna consciousness. The day was mild and clear. The magnificent gates just suddenly appeared from nowhere. On both sides were two huge elephant statues guarding the entrance to the temple. The elephants were so big, they barely fit into the photo. 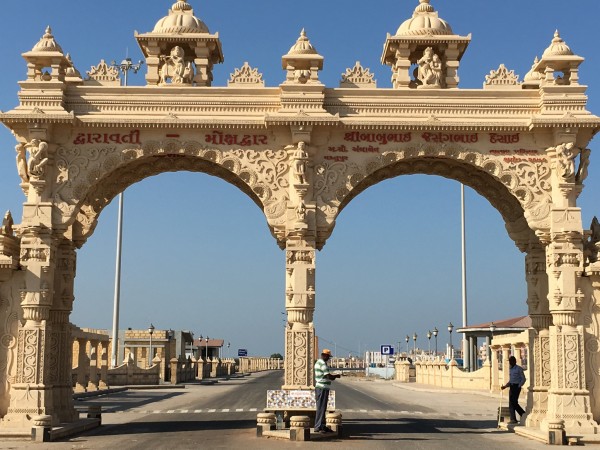 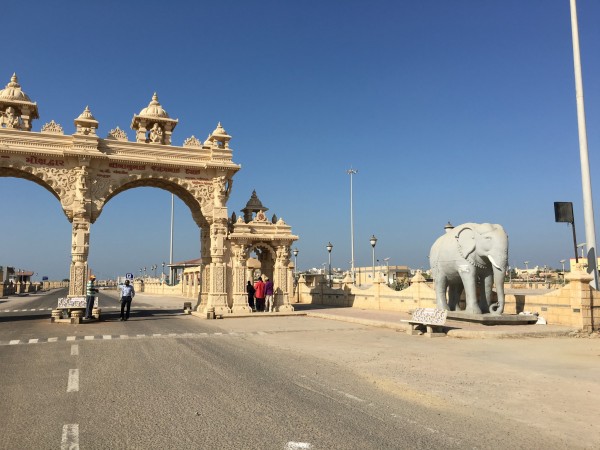 Photos were not allowed in this temple either, so we grabbed an opportunity to take pictures of each other from the outside. While walking through security the young lady – a security guard- found my koala Sam in my bag. She snatched it and notified me that she wanted to keep it as it was such a cute toy. I was shocked and traded Sam back, swapping for small souvenirs from Australia. Immediately a few more guards were there and asked for the presents. I was happy because I saved my koala from abduction and I also managed to keep my phone with me despite the odds. 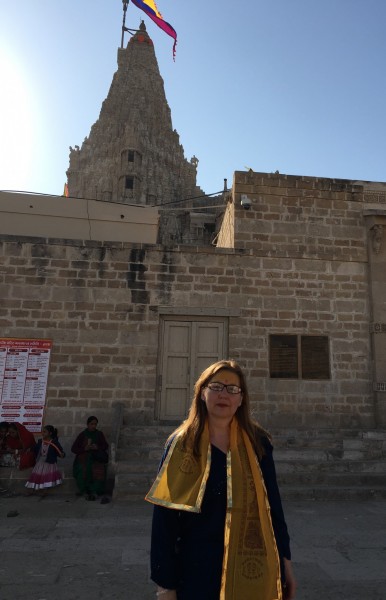 Sangeeta found a priest, who took us around and explained the significance of different rituals and traditions. 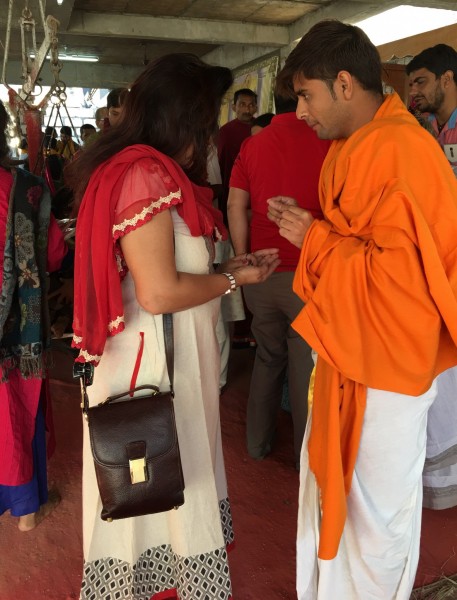 We were blessed with a peacock fan (for a donation, of course). 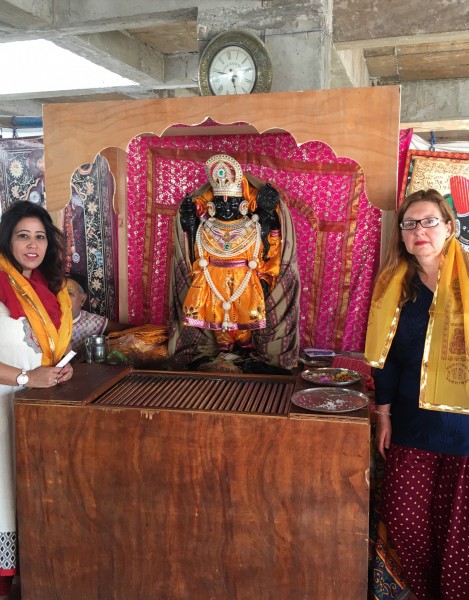 On the top of the temple there is a flag. It is changed three times per day (don’t ask me why). Every time it’s a different colour. The cost of each flag is 37000 rupees, which is about AU $700. Pretty steep, right? 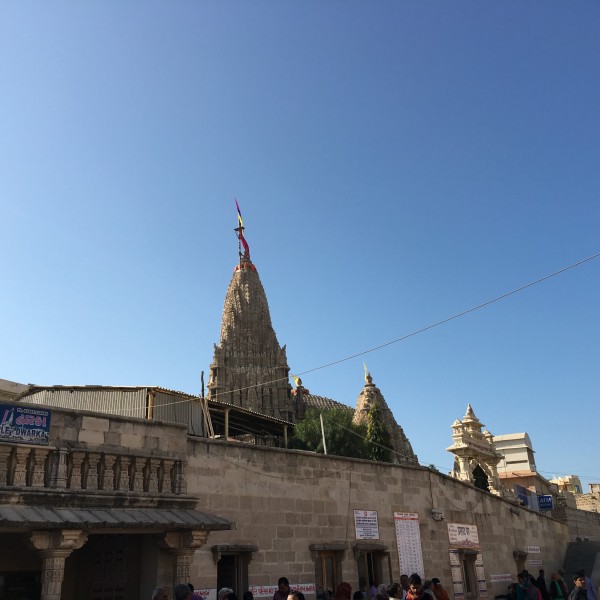 This light suspension bridge was leading into infinity. Unfortunately, we had to go back, so I have no idea what infinity looks like. 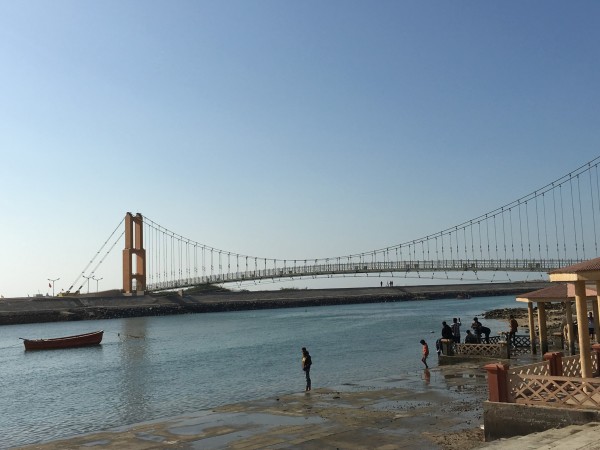 On the ghats a family of worshippers was having breakfast. 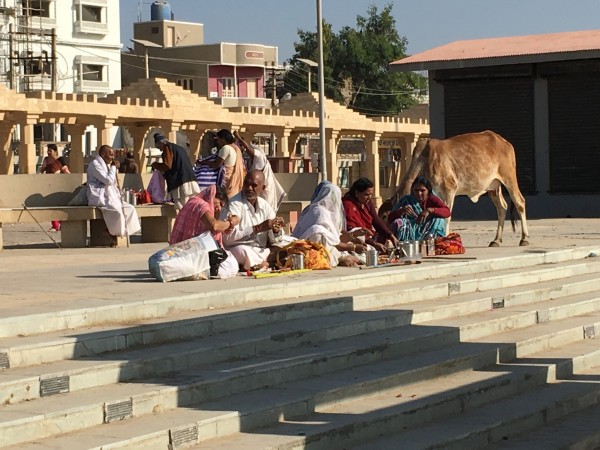 And this is what the Holy Cow looks like. (Have a look at the red dot on its forehead. This distinguishing feature separates just a cow from the HOLY one. 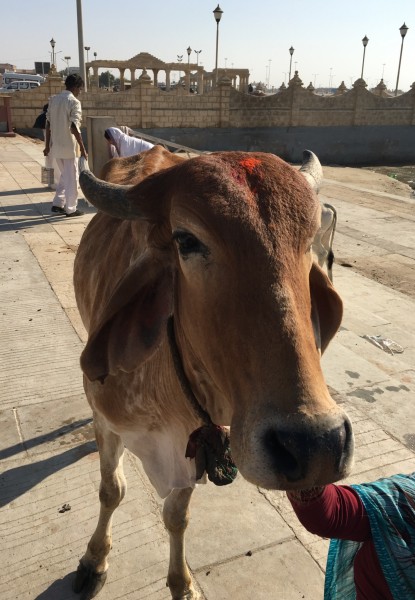 Our visit to Dwarka was over too soon. I noticed an insane thing in India: time is very flexible there Sometimes it stretches and days last forever. Sometimes it reminds me of a shooting star; its fall is very brief, but memorable. It makes my life very interesting and unpredictable. And I love this madness with all my heart.