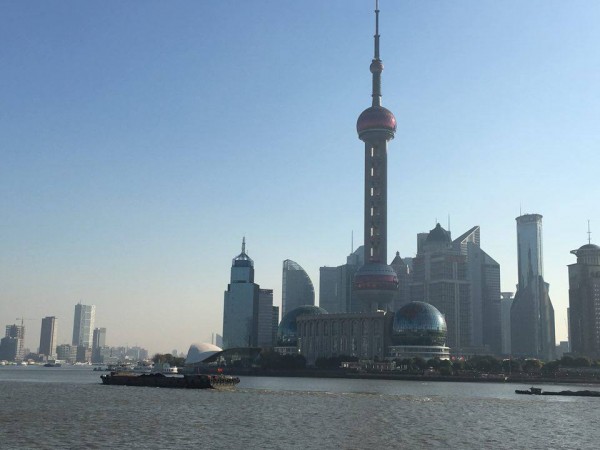 I realised that I am at my happiest while on the road. Say, for example, today when we landed in Shanghai. I am walking down the tarmac, it’s very cold (1 degree C), I am totally alone in this city and my heart is singing. I swear, I could hear it. Is it a new adventure calling me? No idea, but I was so happy.
Customs did not cause any problems. I am Australian after all, and we are welcomed in many countries without a visa.

I had about 6 hours to see as much as I could. On top of my list were the super fast Maglev train and the People’s Square. So, slowly I made my way to the train station.

I noticed a few more tourists, waiting for the same train.

Without hesitation I approached a man and asked if he knew what to do and where he was going. To my delight he had the same plans. So we decided to join our efforts.
The train is super fast, that’s true. 300km per hour is very fast in any book.

But this ridiculous speed did not affect the quality of the ride – it was very smooth and quiet. We made it to the city in about 7 minutes. There we had to take the subway. Luckily, David – my new friend- was a seasoned traveller and been in Asia a lot, so he had a much better idea how to use ticket machines and choose the route. This is what I like the most – meeting new interesting people on the road. I was always very lucky in this sense. I get to know people and we become great friends later.

As I mentioned before, I came originally from Ukraine. The cold frosty weather in winter was a norm. But I became a big “softie” in Australia, and the Chinese winter brought back those cold memories. I guess the fact that I packed my scarf and woollen hat into my luggage didn’t help. But the good thing is I brought my new super warm Kathmandu jacket and gloves. 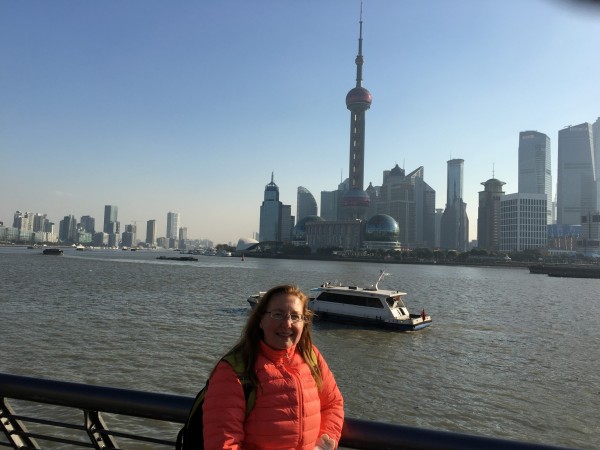 Shanghai skyline and frozen me

Together we reached the People’s Square with the first of the sun’s rays. It felt like magic. I asked David if he could believe we were actually standing in this historical place. And we both agreed it was amazing.

Lots of photos later we proceeded to the river. My phones (3 to be exact) did not work. But that’s nothing new, always the same story. David’s phone had GPS and we found the river pretty soon.

We were getting hungrier by the minute in this cold weather. David wanted to find one particular street with lots of street vendors and food stalls. It took us a while, but we found it. We decided to share sesame pancakes, pork bun for him and vegetarian bun for me. My God, it was so tasty. Probably, because we were very cold, or maybe we enjoyed each other’s company.

David is a avid traveller, and has visited many interesting countries. Some of them I’ve visited as well, so we could compare the experiences. But he has never been to India. So, there and then I organised a mini presentation for him.

In the end I convinced David to visit Ladakh – my Ladakh, the place I love to no end.

Unfortunately, time does not stay still and we had to say our goodbyes. My flight was scheduled in two hours, but David would catch his plane to LA in the evening.

As a real gentleman he escorted me to the subway station and explain in details how to get back to the airport. We took selfies, exchanged emails and parted our ways.

And to my total surprise I made it back without any halts or detours. I take it as a Chinese magic!