Dimboola is a small country town in the west of Victoria. Until 1867, it was known as Nine Creeks. An English surveyor renamed it after the place in Ceylon, which he had visited previously. Dimboola translates as “fig place” from Singalese (I couldn’t see any resemblance to Ceylon at all, unfortunately).

It is a gateway to the Little Desert and the Pink Lake. Dimboola is also the wheat capital of Victoria,

The Riverside caravan park where we stayed, has been recently refurbished with brand new spacious cabins on the banks of Wimmera river. Our cabin was facing the small creek. There were some fantastic views from the veranda. 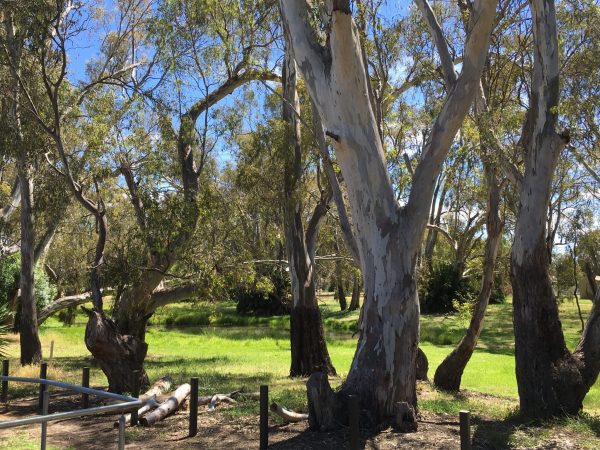 Walking along one of the main streets, we found a large sign showing the direction and distance to different destinations around the world. Now I know that it’s 9890 km from Dimboola to Delhi, 14112km to Moscow and 316 km to Melbourne. 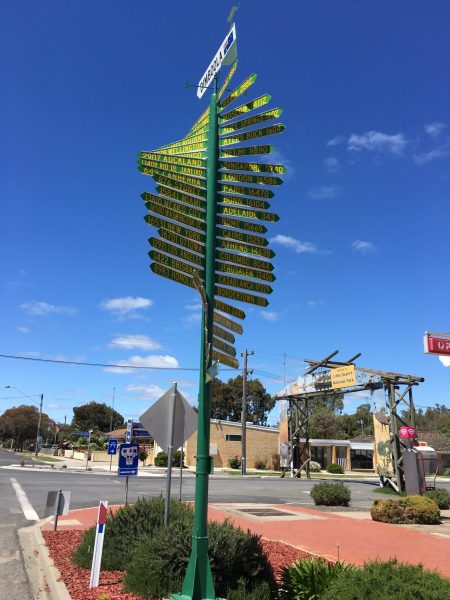 There are a few interesting historical buildings in Dimboola. One is a small wooden Courthouse. I guess there is very little crime in this area. 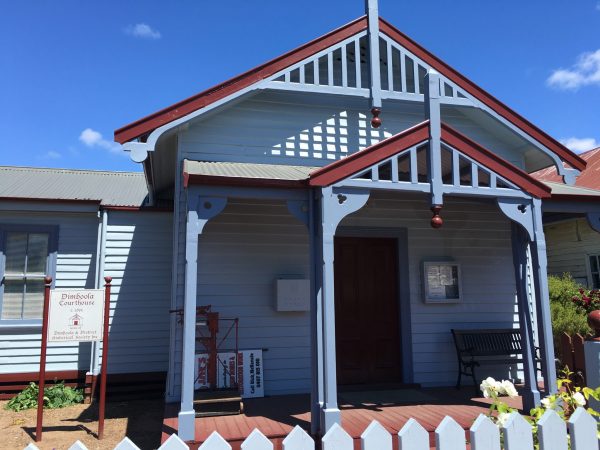 Another one would the the bank. Look how elaborate the detailing is. I really loved it. 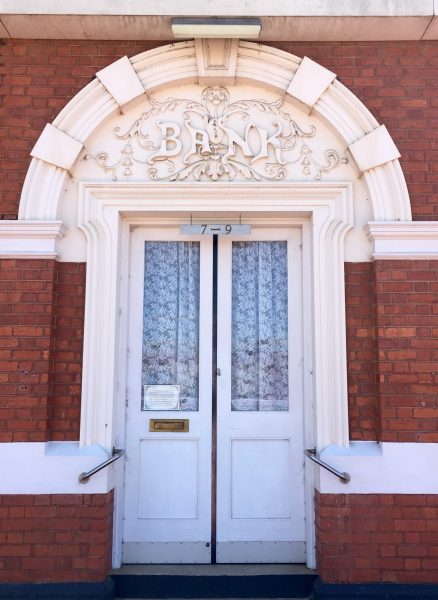 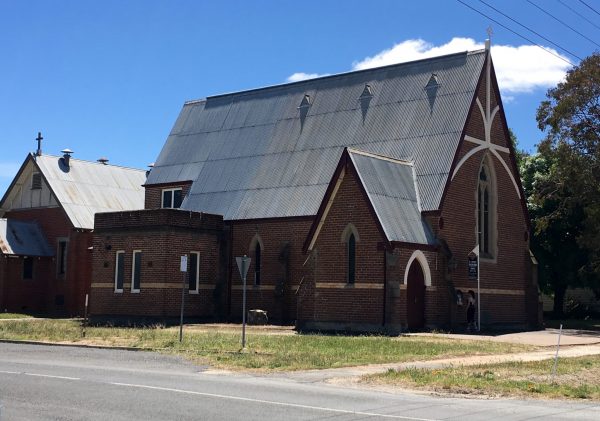 Local people decorate their houses with sculptures of wildlife. I found this great statue of Eagles in one house and snapped the photo. They look so real. 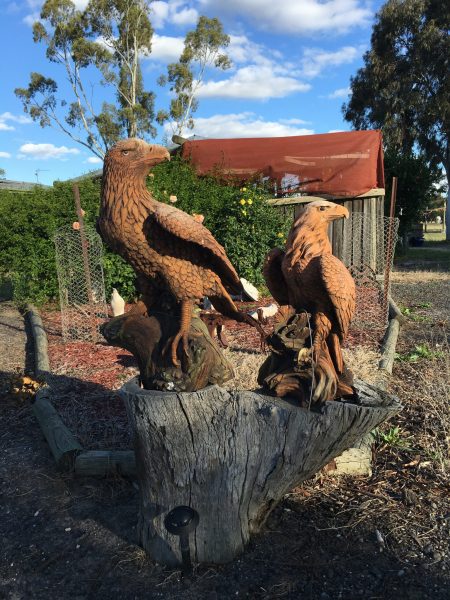 We decided to visit Little Desert National Park, which was literally 10 minutes drive from the caravan park. 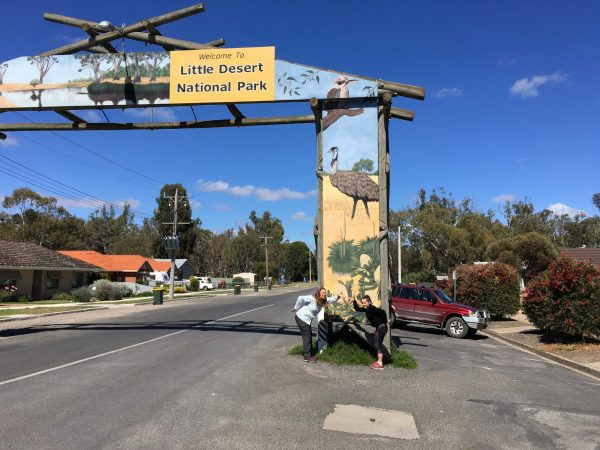 Ok, a desert is a desert. It was totally covered with bush, mainly heath. I expected it to be more like a traditional sandy landscape, but I was wrong. 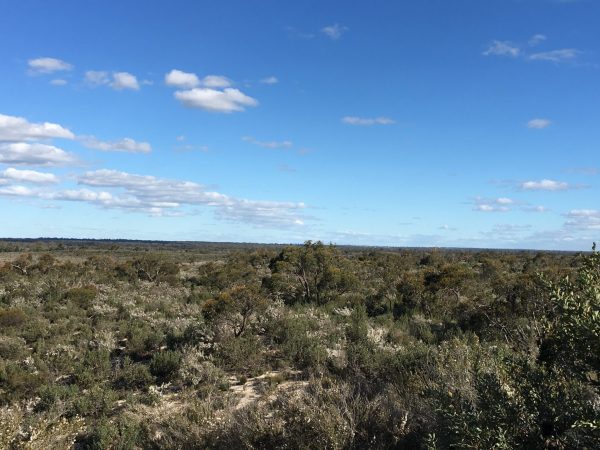 Everywhere I looked were high blue skies and small white flowers, which gave all of us hay fever. 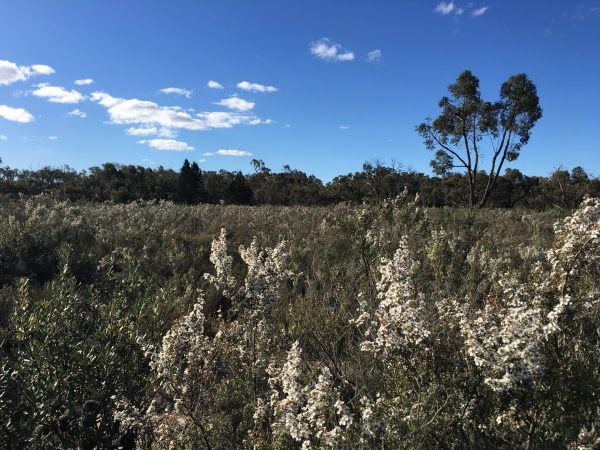 Someone needed a little boost of alcohol to deal with this wild beautiful landscape. I swear, it was not me. 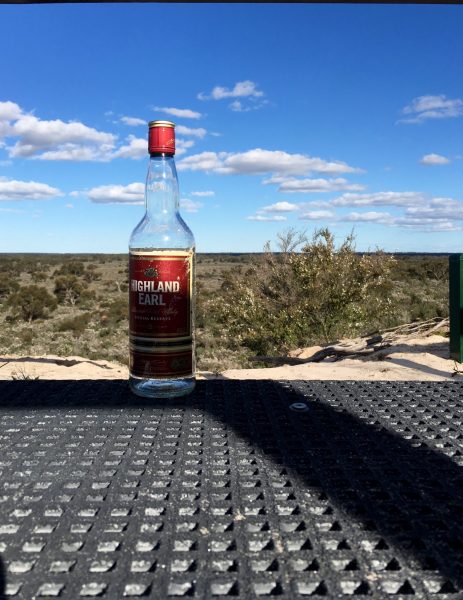 Next day we decided to do hiking in Grampians. This place is fantastic. Huge mountains dominate the landscape. 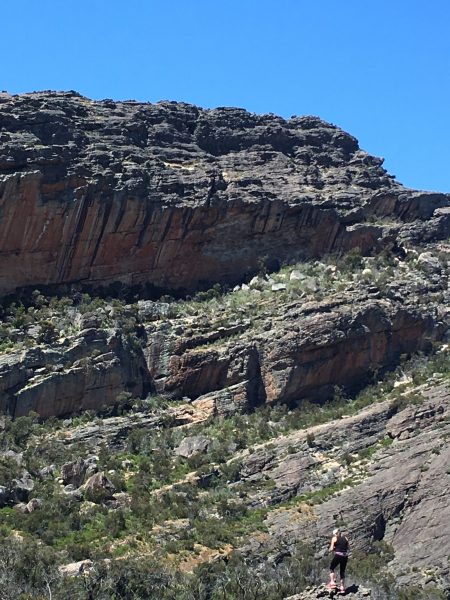 The road there is just spectacular. 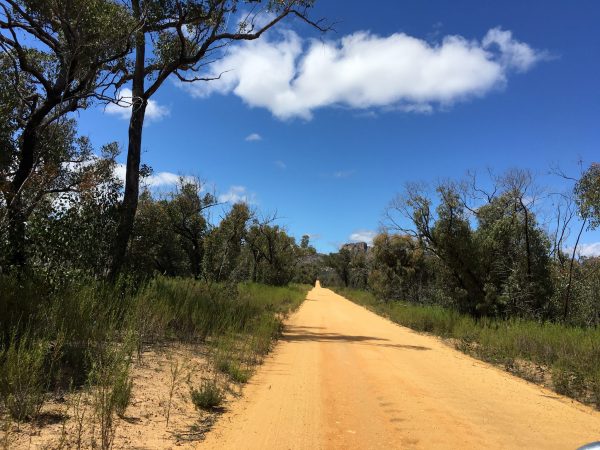 This huge stone turkey in its nest was looking at the blue sky. Visitors were of no interest to it. 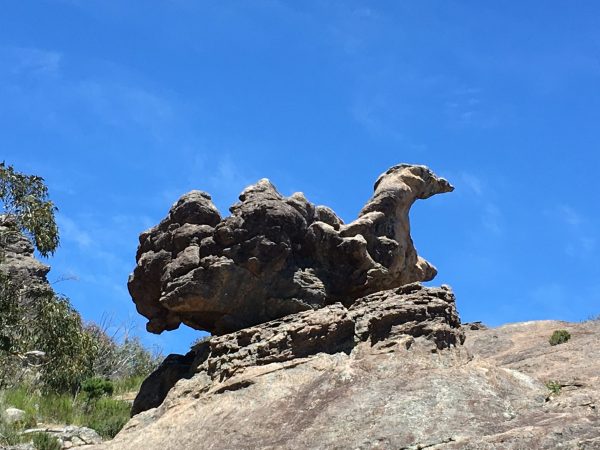 This place is very popular with tourists. 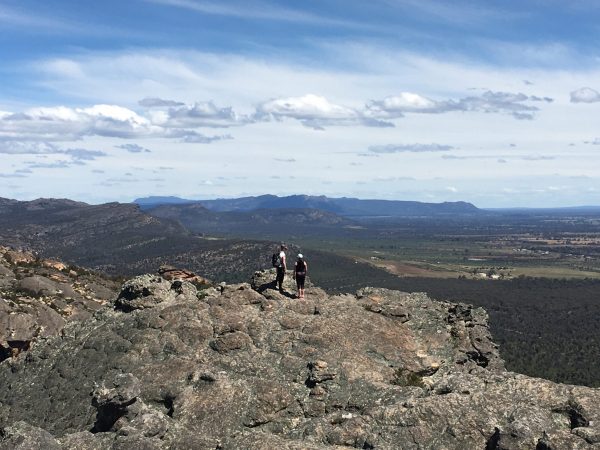 Beautiful formations appear around every corner. 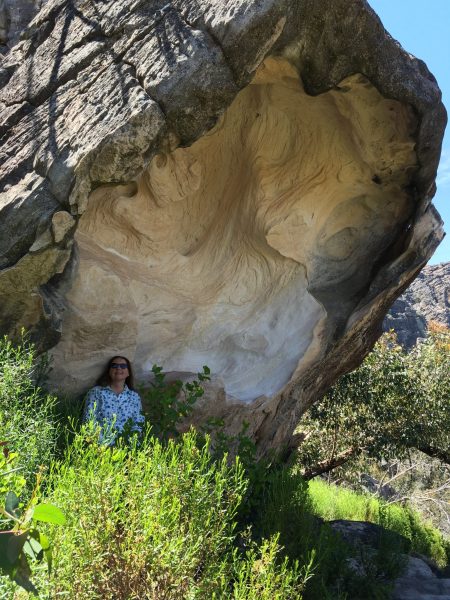 This place was so tranquil that it just calmed me down for a few moments before the next climb. 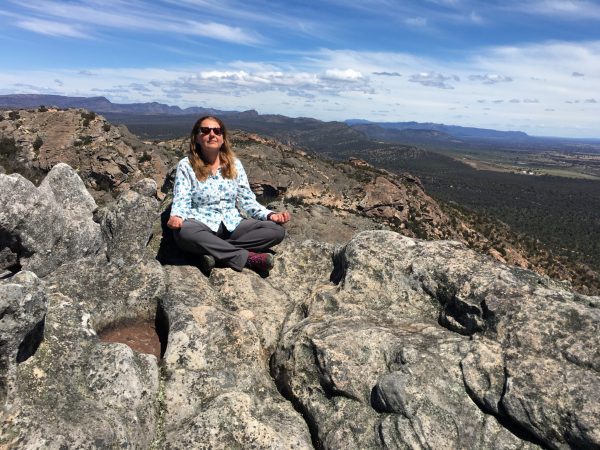 To get to the large cave at the top of Mount Zero took us more than two hours. 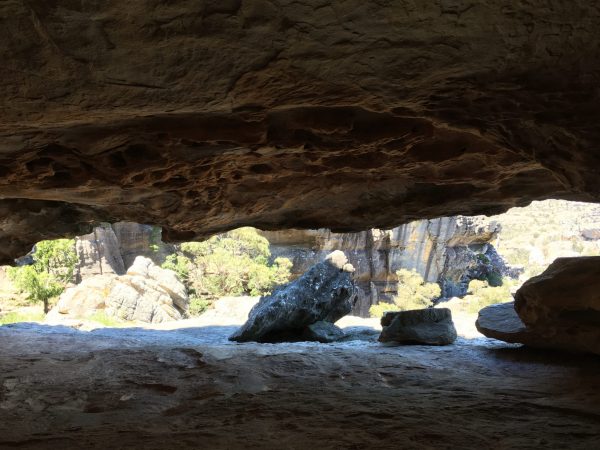 Inside the cave we found small cavities, which swallowed us in their nests. 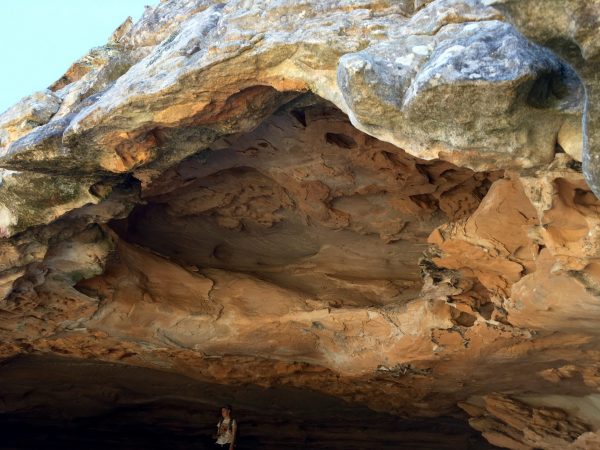 This is a little chick in one of the nests. 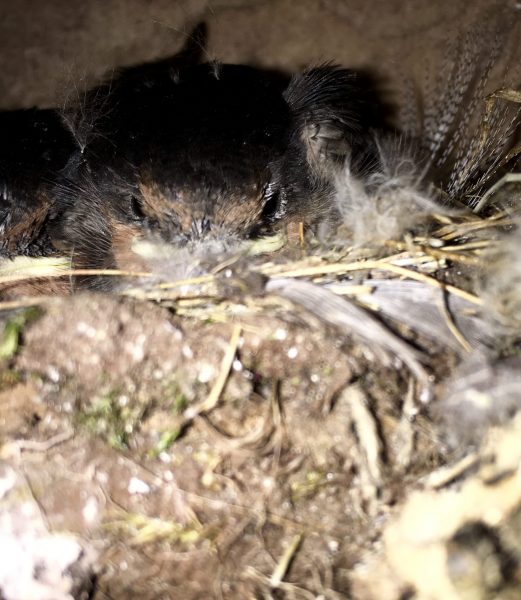 Look who climbed to the top. 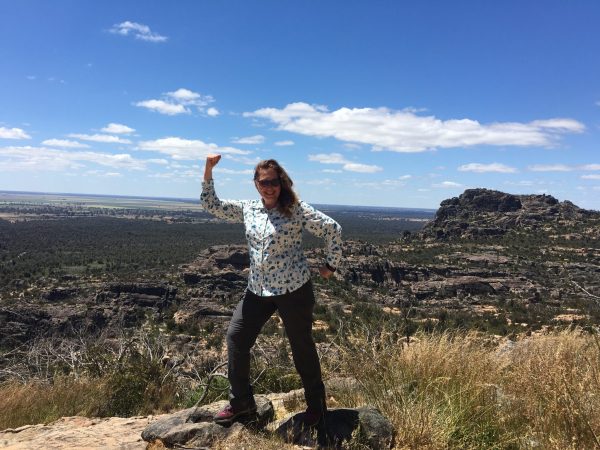 Grampians have some spiritual significance to the aboriginal communities. In one remote corner, we found a wall with young people’s hand prints and they were only the right hand. To produce those prints people would deep their hands into red ocra and place them on the wall. 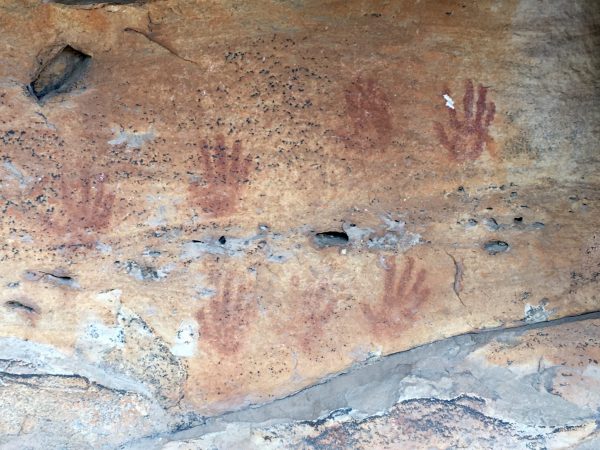 Very strange “half-flowers” covered the foothills of the mountains. 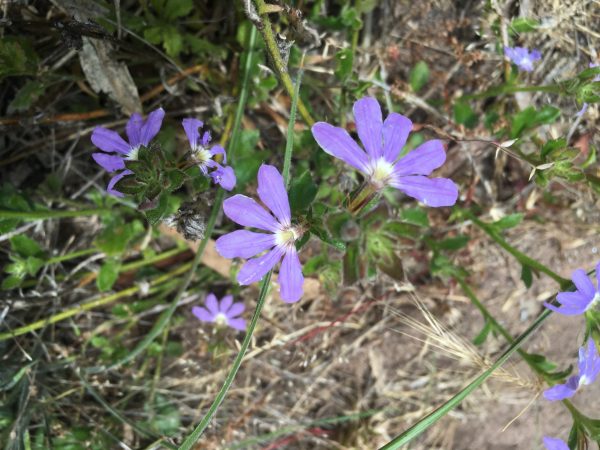 There, a few kilometers from Dimboola is a natural phenomenon – Pink Lake. This is how it looks from the Western Freeway. 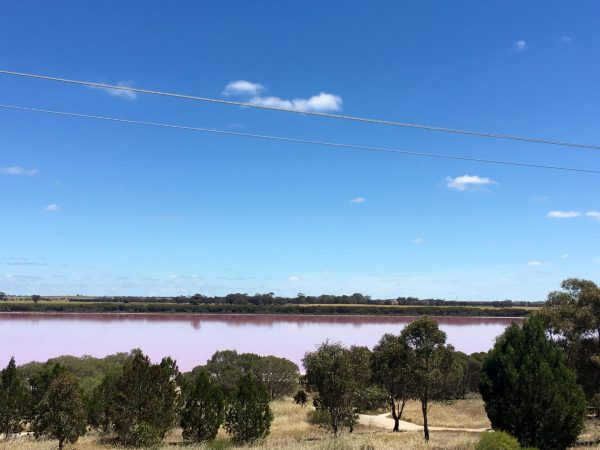 The pink colour of water comes from tiny pink algae. 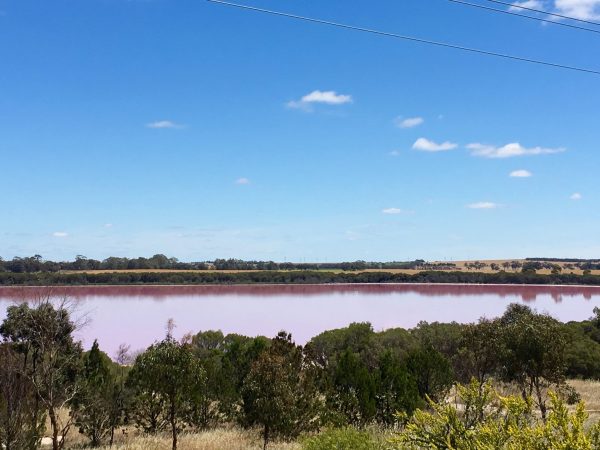 The intensity of the pink colour depends on the water level in the lake. 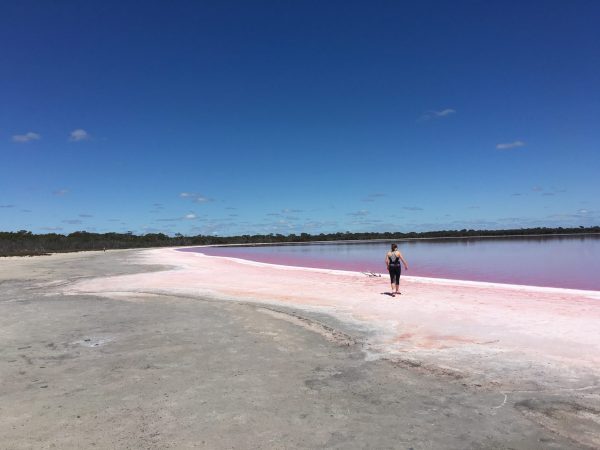 My little friend Sam the Koala was getting ready for a sailing adventure in a plastic tub. But in the end we decided against it. 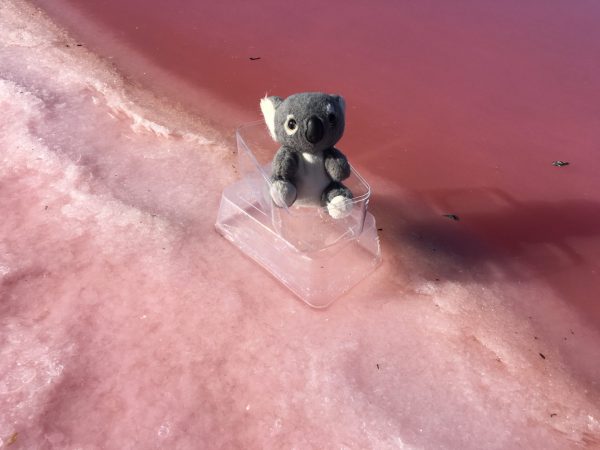 When it’s daytime and water level is low, a white colour from the salt at the bottom reduces the intensity. 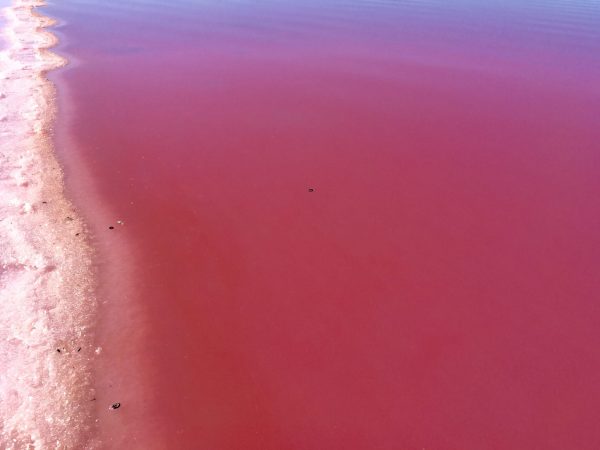 The water is over saturated with salt and has oily feeling. The high concentration of salt is quite damaging to footwear, especially leather ones. Have a look at the photographer, who wrapped their shoes in thick plastic bags. 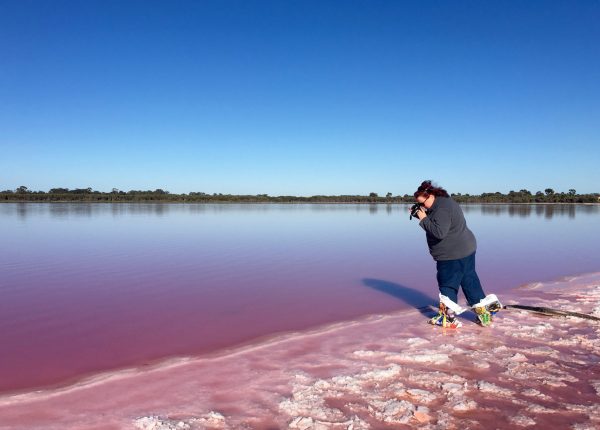 Not long ago salt from this lake was harvested in commercial quantities and sold at souvenir shops but not any more. We still managed to grab a little bit for ourselves. I dried it at home and it become plain white huge crystals. 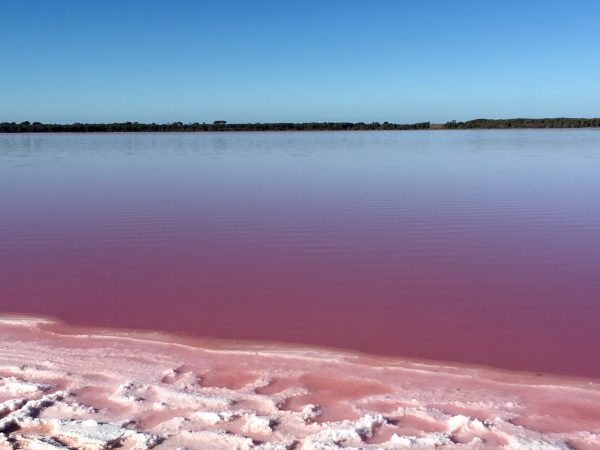 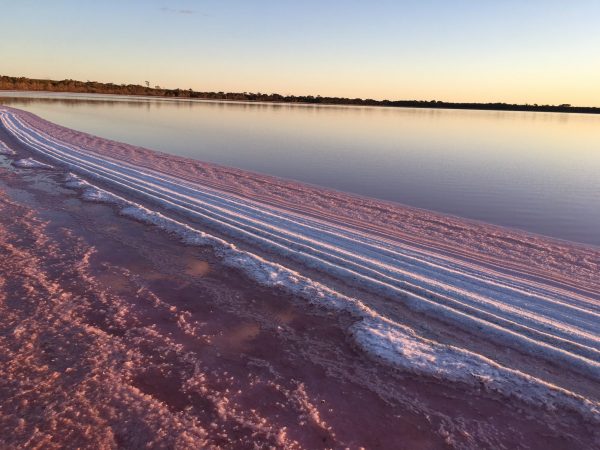 This place is half way between Melbourne and Adelaide. It is well worth the visit. Great picnic facilities, lots of space, great at any time of the day. Highly recommend a visit.