Recently I attended a presentation about trekking in NZ, which made me wonder why I have never tried to do it before. So, as soon as the first opportunity arose, I jumped on it.

After some preliminary research, I found out that there are great walks on the Northern Island too. The most famous one is Tongatiro Alpine Crossing, which is a full day 20 km hike starting in Taupo. Without any hesitation I called the Adrift company and booked the hike.

I was picked up by the driver at 5 am from my hotel. The day promised to be clear and dry. This is a photo of the glorious sunrise. No doubt I am in for a good start! 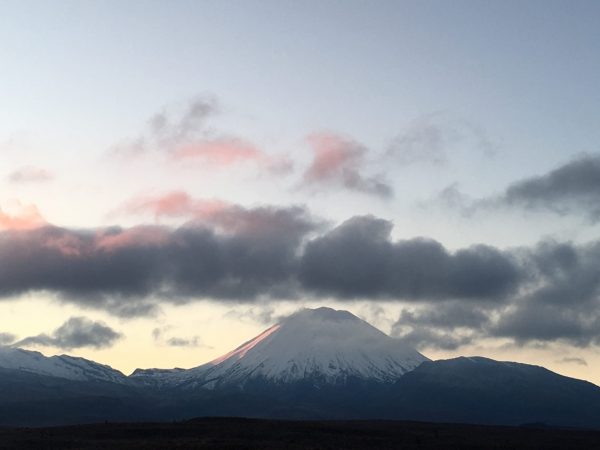 We picked up seven more people on the way. It was a great bunch from all parts of the world: Australia, England, America and Scotland. After checking our gear and supplying everybody with ice axes and crampons as well as proper hiking boots and pants, the guides took us to the mountain. And my God, the view was just stunning!! 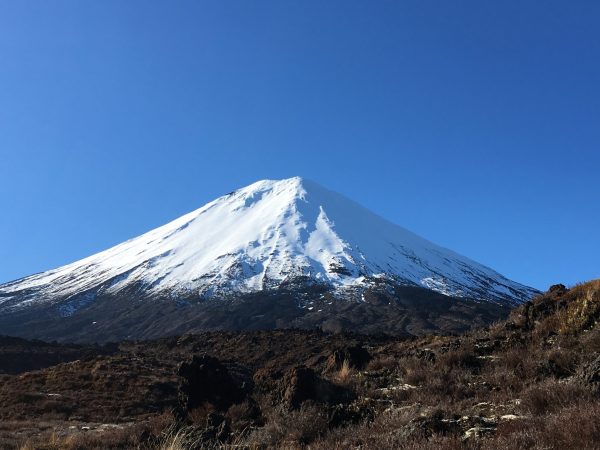 NZ is one big volcano. No, let me rephrase that: hundreds of big and small volcanoes, which have their own secret life. Tongariro National Park is a complex of multiple volcanic cones constructed over a period of 275,000 years. The volcanoes periodically erupt and there is no pattern or schedule. Every time it’s a surprise. Therefore there are a lot of lava rocks on the floor and the mountain face. 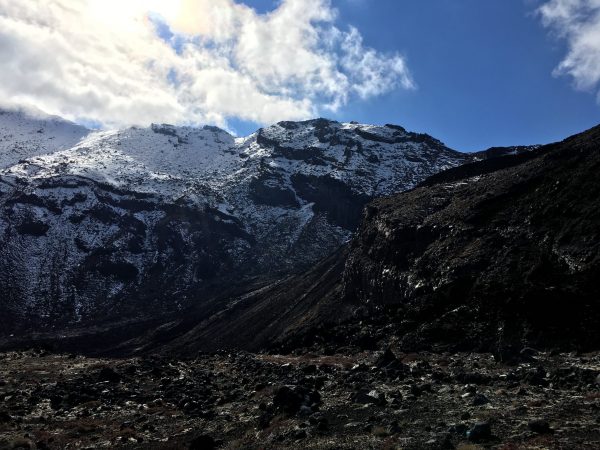 The higher we went, the colder it got and there was more and more snow everywhere. 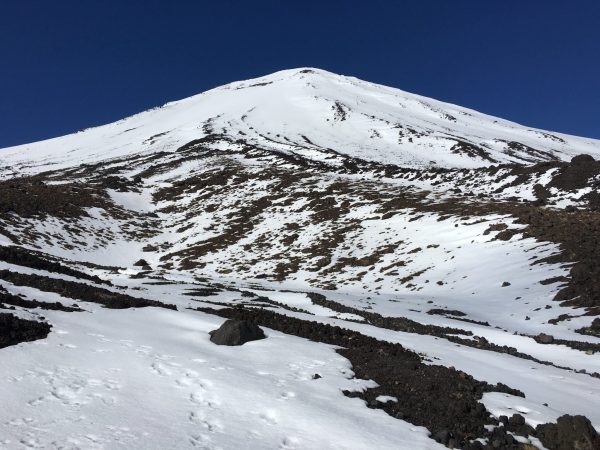 The landscape was getting more rough and craters appeared on the right and left. The track lead up to the saddle between Mt Ngauruhoe and Mt Tongariro and then diverted over Mt Tongariro. 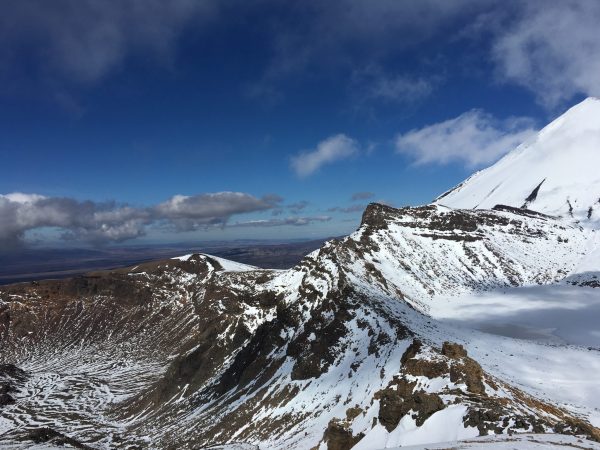 This terrain is quite a dangerous place. The volcano can erupt without any warning, rocks can fall unexpectedly, dangerous gases are settled at the bottom of the craters. 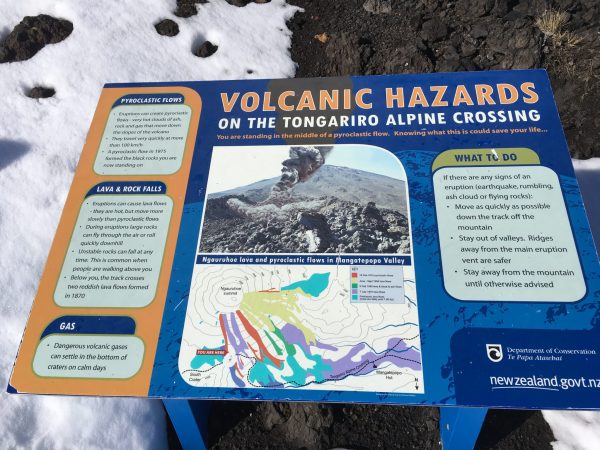 At this point I realised how much I miss Ladakh in India and Nepal.  This white vast landscape is totally stunning and it reminded me of the Himalayas. 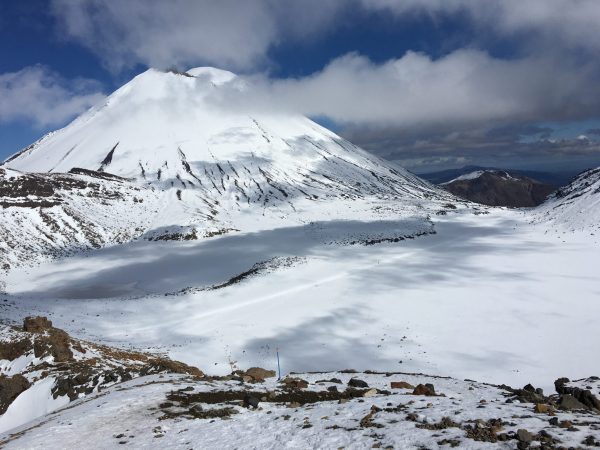 The mountain isn’t the highest by any means, it’s only 1978 m above sea  level. 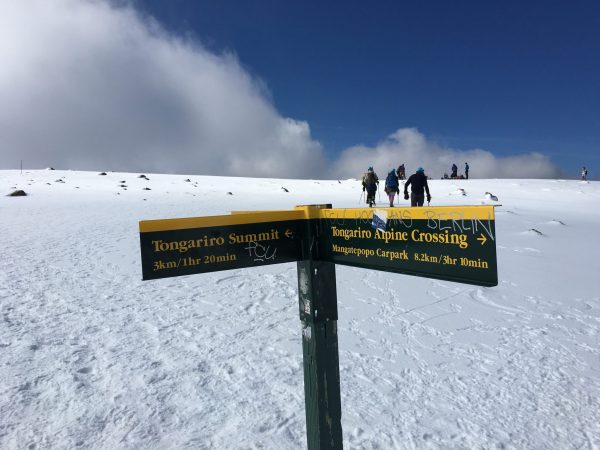 Sulfur dioxide gases are being released from underground everywhere. In some places they collect under the snow creating dangerous pockets. Our guide was taking photos of two new ledges, which supposedly are hollow, and therefore extremely dangerous. This is one of those pockets along the trail. 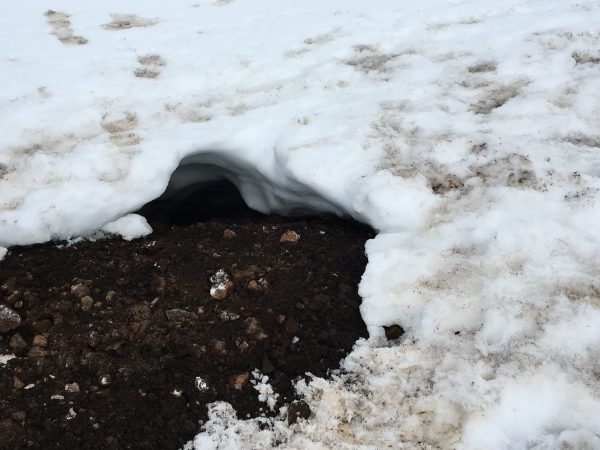 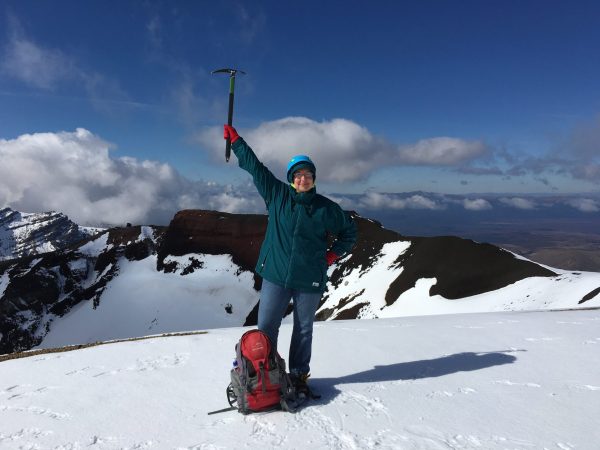 This is the largest crater in the area. British explorers called it Red Crater. Apparently, it’s really red in summer months. 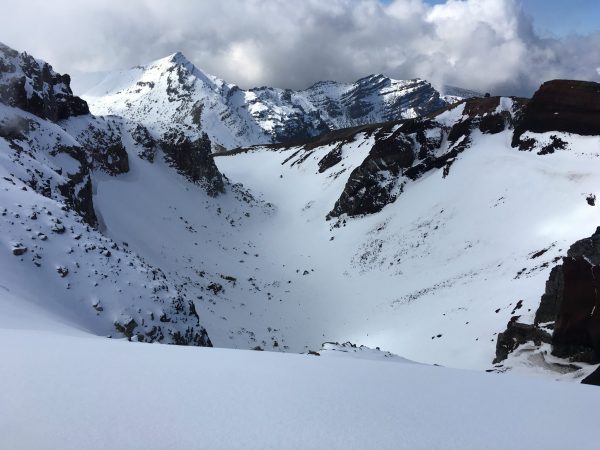 This is my group listening to the guide, Justin. He told us so much about the area and volcanoes. 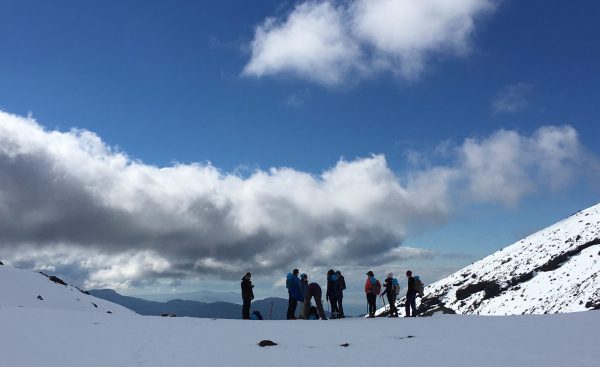 Down below there is Lake Taupo, which is in a crater created by a supervolcanic eruption which occurred approximately 26000 years ago. This lake is just huge. 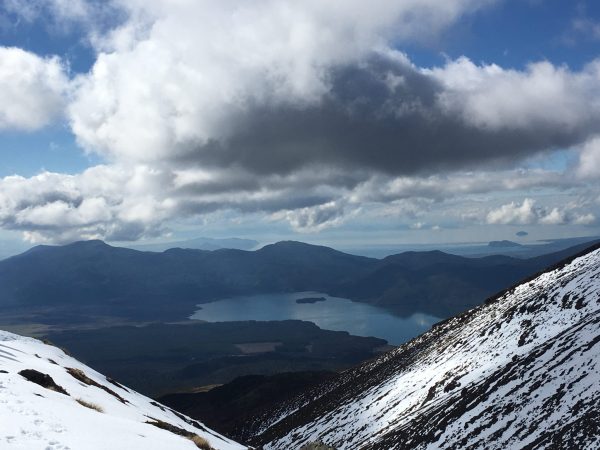 One more photo before descent. 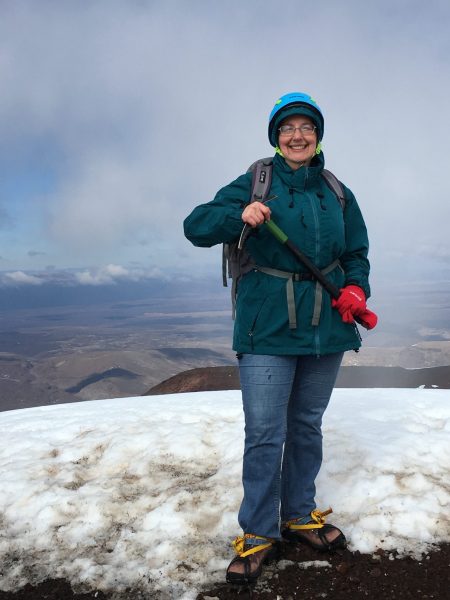 We were very lucky to have a beautiful sunny day. But an occasional cloud would engulf  us completely so we could appreciate our luck more. 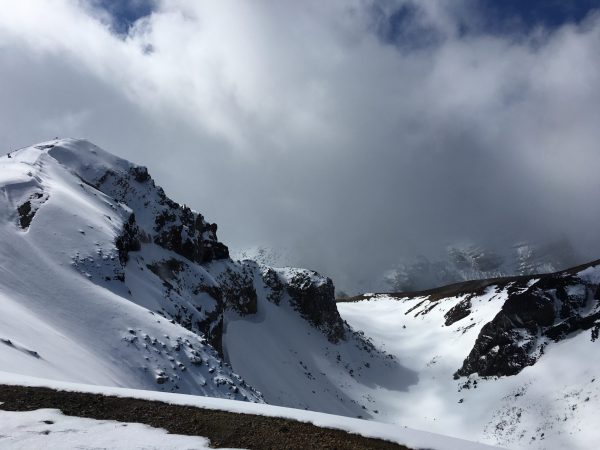 This place is very popular with tourists. Look how many footprints are in the snow. 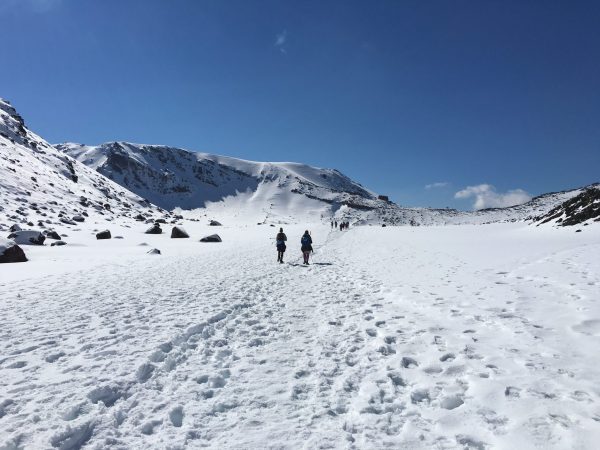 This is one spectacular snow-white wonderland. 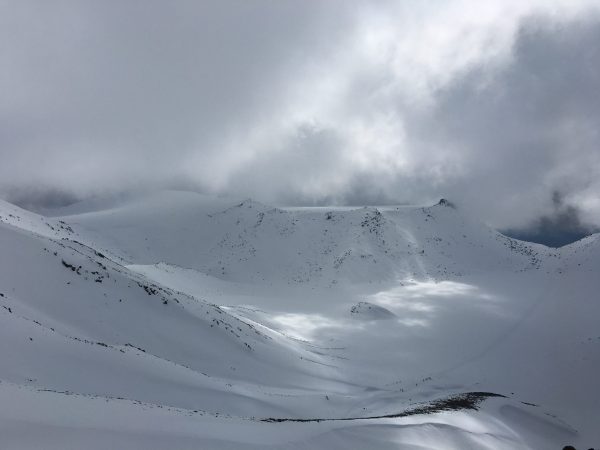 Going down isn’t an easy task either. The surface is slippery and uneven. Part of the group decided to slide down on the  backside (literally).

I love my backside, so I spared it this ordeal. I walked down with a guide and two more girls. At least I stayed dry. 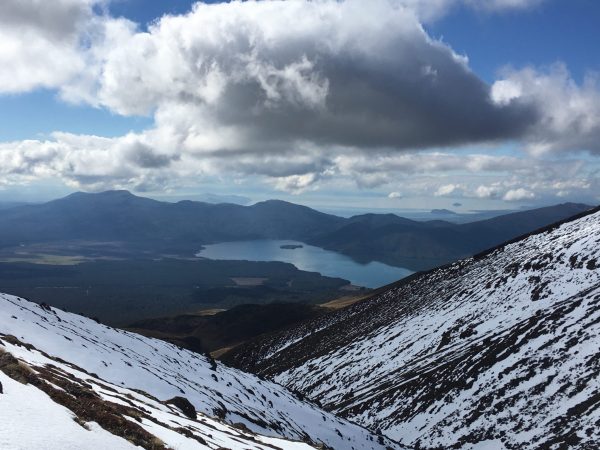 My group went down on a very narrow path. 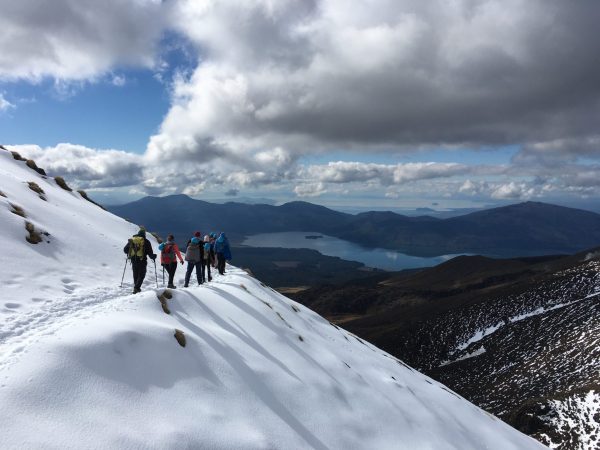 Closer to the bottom there is no more snow. The steam near the ground is from the thermal wells. 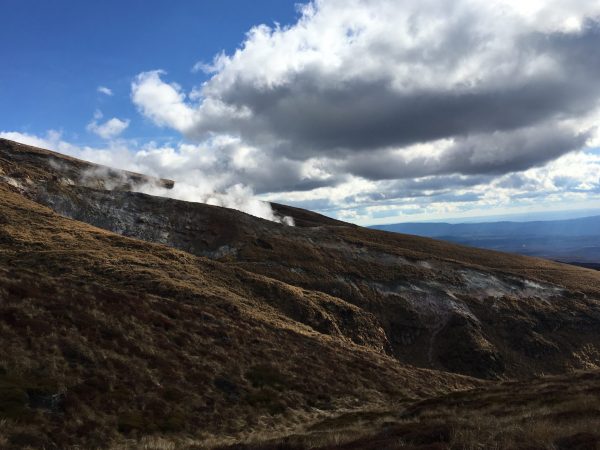 Even in winter there are some plants, which enjoy this harsh environment. 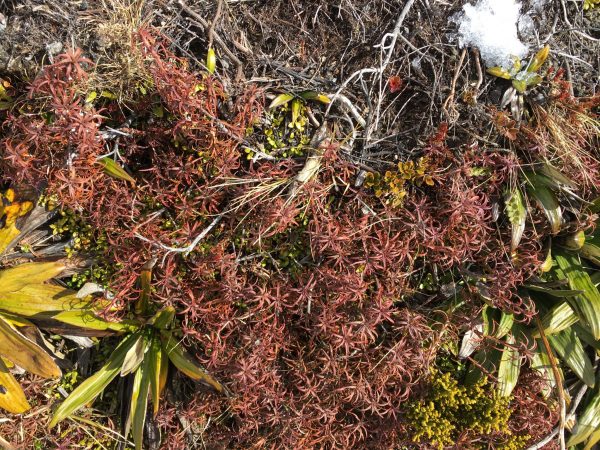 By the end of my trip I did almost 40000 steps and climbed 321 floors. It was a hard walk, but I am so happy I took the challenge. 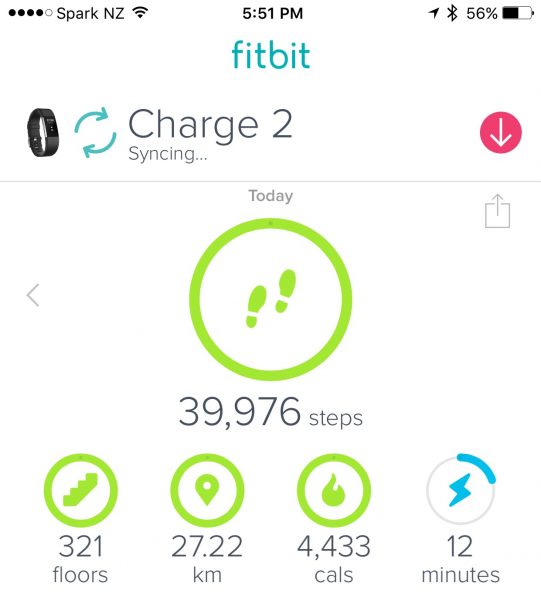 And the sunset like this was a great end to a great day! 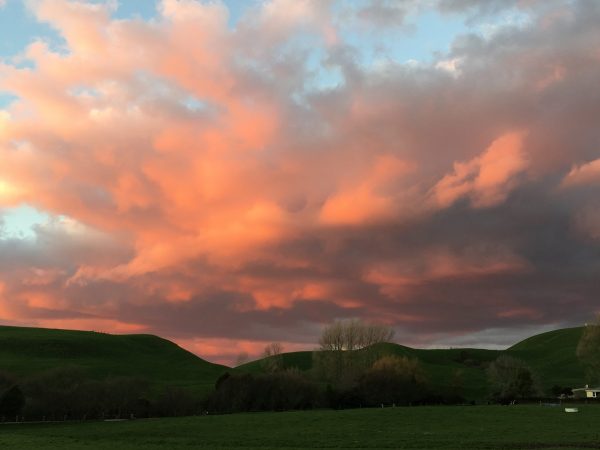 I would like to also acknowledge the Adrift staff, who made it all possible: their boss Stuart, my guide Justin and driver Tom.