Indians ‘migrated to Australia 4,000 years ago’

When I visited Kakadu Park in Northern Territory (Australia) last year, I was surprised by the aboriginal paintings on the rock face.  Some of them were preserved better than others, but none-less they all were beautiful. On one of those paintings it was a fully dressed man ( I would say European origin) with a riffle.  White people arrived to Australia only about 250 years ago as claimed by modern history. According to the super-duper advanced carbon testing, this painting is more than thousand years old. So here is a big time gap in between. 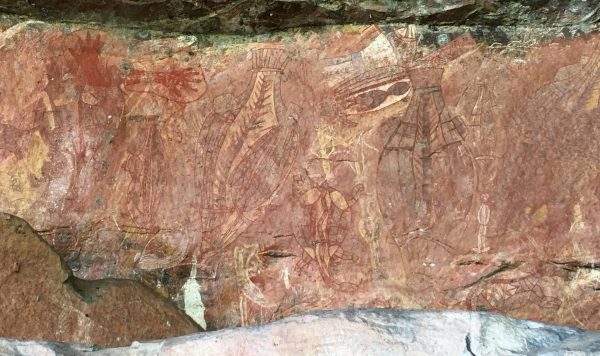 But now I found another article claiming that Indians came to Australia four thousand years ago. This is a new twist.

“Ancient Indians may have arrived on Australian shores about 4000 years ago and mixed with Aborigines before Europeans colonised the continent, according to scientists. A genetic study of more than 300 Aborigines, Indians and people from Papua New Guinea and south-east Asia found a “significant gene flow” from India to Australia about 4230 years ago

The finding challenges the long-held assumption that humans arrived in Australia about 40,000 years ago from Africa and remained isolated from other populations until British settlers appeared in the late eighteenth century.

A genetic study of more than 300 Aborigines, Indians and people from Papua New Guinea and south-east Asia found a “significant gene flow” from India to Australia about 4230 years ago. It also says the humans from the subcontinent may have brought the dingo with them.

“Long before Europeans settled in Australia humans had migrated from the Indian subcontinent to Australia and mixed with Australian Aborigines,” says the study by researchers at the Max Planck Institute for Evolutionary Anthropology in Leipzig, Germany.

“We also detect a signal indicative of substantial gene flow between the Indian populations and Australia well before European contact … We estimate this gene flow to have occurred during the Holocene, 4,230 years ago.”

The study, published in the Proceedings of the National Academy of Sciences, also says the Indian migrants may have introduced food processing and tool technology to Australia.

“[There was] a sudden change in plant processing and stone tool technologies, with microliths appearing for the first time, and the first appearance of the dingo in the fossil record,” said Dr Irina Pugach, the study’s lead researcher.

“Since we detect inflow of genes from India into Australia at around the same time, it is likely that these changes were related to this migration.”

The study says that though the DNA of dingoes appears to have a southeast Asian origin, “morphologically”, the dingo most closely resembles Indian dogs.

A common origin was also discovered for the Australian, New Guinean and Philippine Mamanwa populations, who followed a southern migration route out of Africa beginning more than 40,000 years ago.

The groups are believed to have split about 36,000 years ago when Australia and New Guinea formed one land mass”.

So, what do you think is it true?

http://www.telegraph.co.uk/news/worldnews/australiaandthepacific/australia/9802024/Indians-migrated-to-Australia-4000-years-ago.html by By Jonathan Pearlman