My great friend Athula R. told me before I left Melbourne that I must visit Sigiriya – the holy place of Sri Lanka. According to him, if I haven’t seen Sigiriya, I haven’t seen Sri Lanka. Naturally, it was at the top on my list of activities on this magic island. Thank you, Athula, you were right!

Sigiriya , which means Lions Rock in Singhalese, is monumental granite rock in the Central Province of Sri Lanka.  Way back it was a royal city, established by King Kashyapa more than 1500 years ago. Two hundred metres tall and in the middle of the dense jungle, this place provided great protection from the enemies. And Keshyapa had plenty of them. After ousting his father, who was the King and his brother -the rightful heir to the throne, Keshyapa had to hide from the people that far away. As the story goes, he also grabbed the main relic of Sri Lanka – the Buddhas Tooth – and built a great palace to protect it. 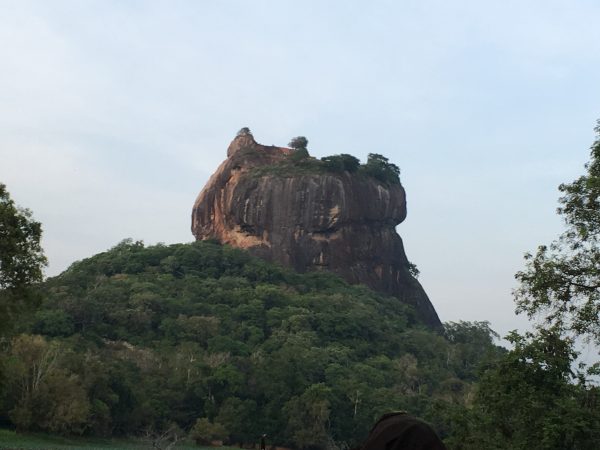 On this map below we can see how big was that city with Summer Palace, outer mote,  two entrances, Lion Paw Terrace and many  herbal, boulder and water gardens. 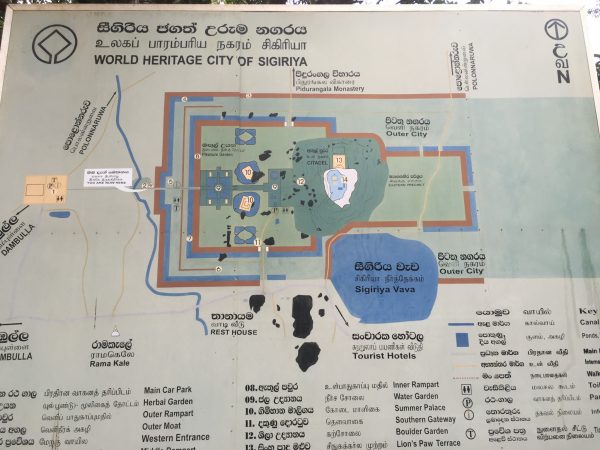 This is a main entrance, which presents the great view of this place. Back then water channels were filled with lotuses and flowers grew along the footpath. The past was splendid, the present reminds us that time can destroy anything and everything. And Sigiriya is the great example. 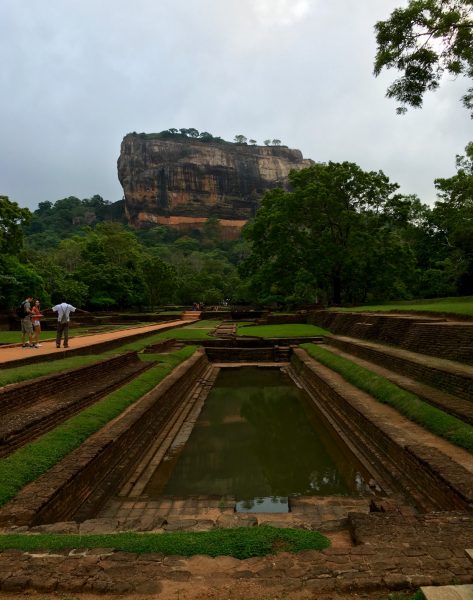 Not far away there is another large Pidurangala rock formation, but Sigiriya was a better place to hide because of the steep hills and limited access to the top. 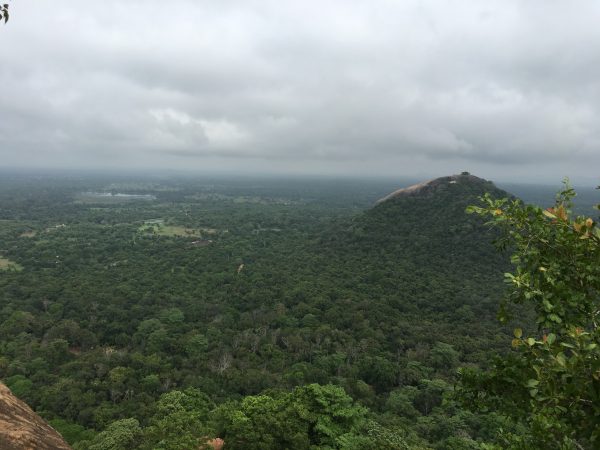 This is a view of the gardens and the entrance from the top. While walking along the footpaths and sticking my nose in every corner, I could not comprehend the actual size of the palace and the grounds. Looking from the top put everything into a perspective. 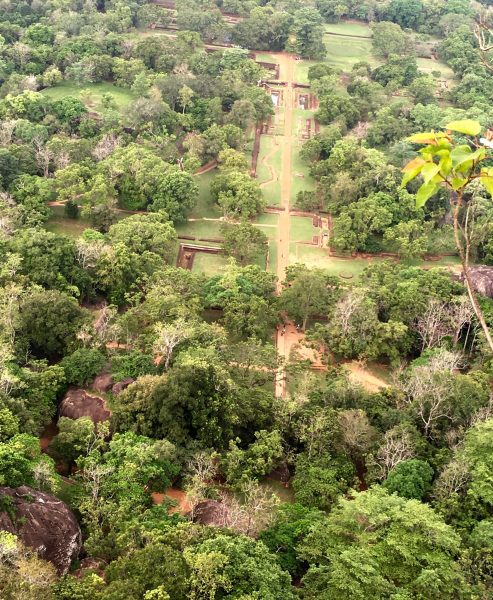 Huge boulders worked as a natural protection, but now they are part of the scenery. This entrance looked very mysterious and inviting at the same time. 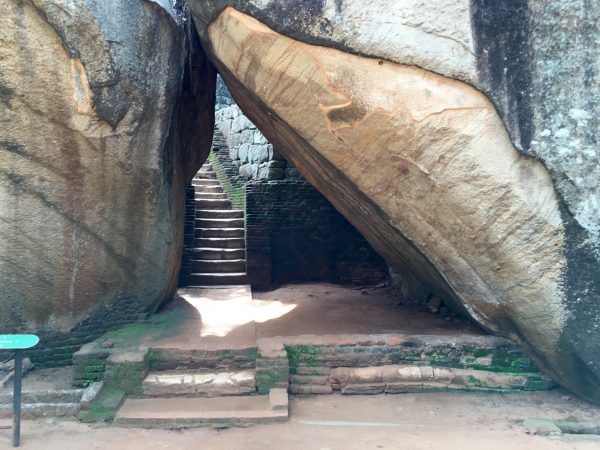 Some parts of the ancient city survived better than the others. This dry wall, covered with  moss is a great example of craftsmanship which survived for thousands of years. 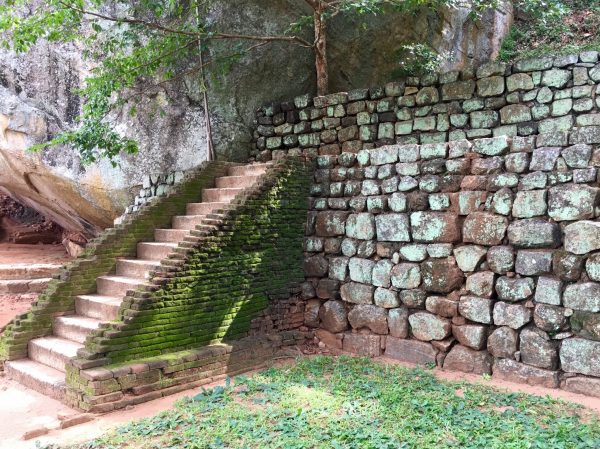 My little travel companion Sam the Koala climbed with me hundreds steps to get to the main attraction of Sigiriya – Lion Paw terrace. My guide said that originally the whole place looked like a lion, resting his huge head on the paws. But due to weather conditions and time, of course, the head was destroyed. 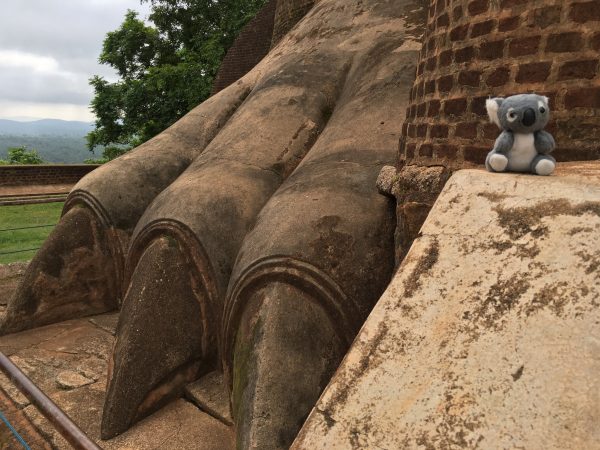 I made it. It was really hard to get to this point, which was not even halfway. I had to climb many more narrow stairs to get to the top. Now, just imagine for the second how could poor servants carry the King up the hill. 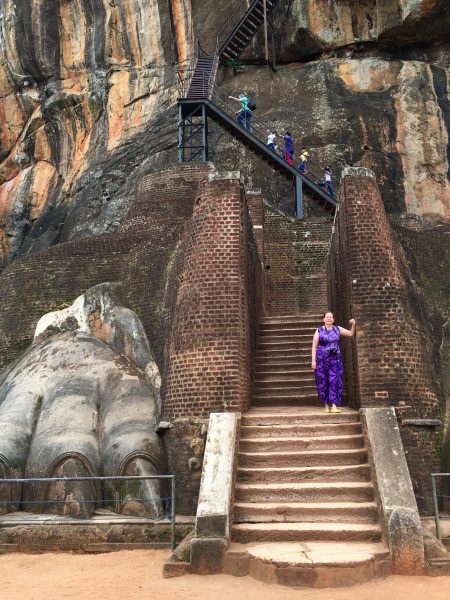 All those walkways, barriers and stairs were made for tourists, but in ancient times all building materials, food, water, even guests had to be carried to the top by servants. HOW was it possible? 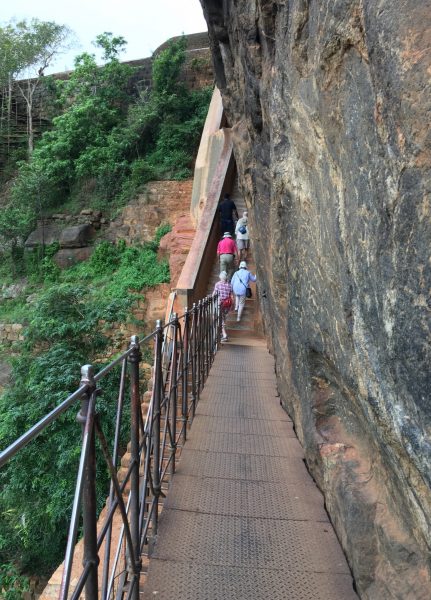 Since our wonderful driver Satadragged us out of beds very early, we had this place to ourselves. In the morning there were not many tourists, which provided early birds like me with great opportunities to investigate and admire Sigiriya in peace. Below is a photo of a modern staircase, which took me to the mirror wall and display of ancient frescoes. 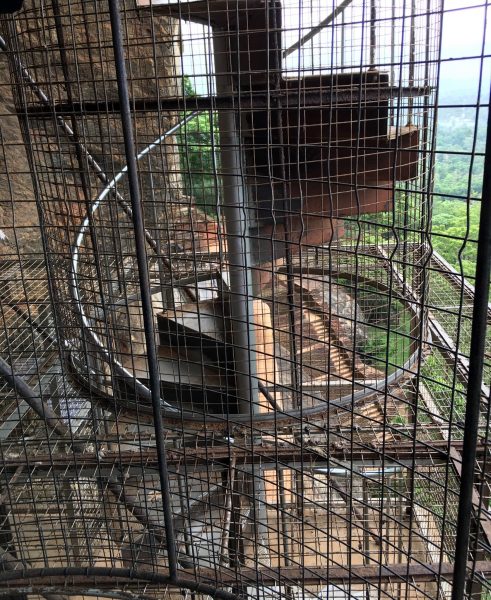 Very little survived till our days, but my imagination went wild. This place was enchanting. The stunning frescoes made with natural paints were beautiful and delicate. The craftsmanship was outstanding. Each painting told a little story, mainly from Ramayana , but with local influences. 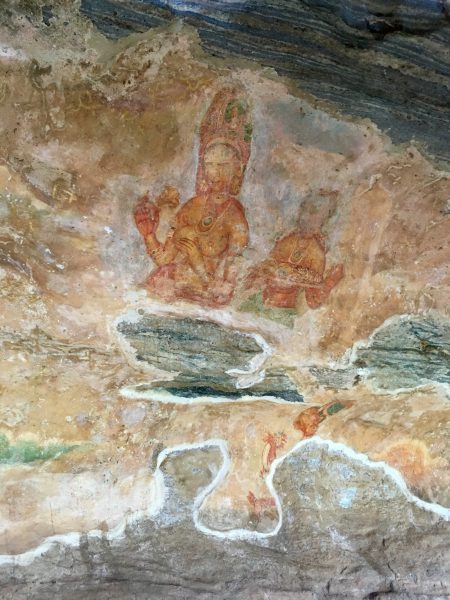 Sigiriya is UNESCO World Heritage Site, where many of the distinct features of the grand Royal abode are still present. Below is the photo of the terraced gardens. 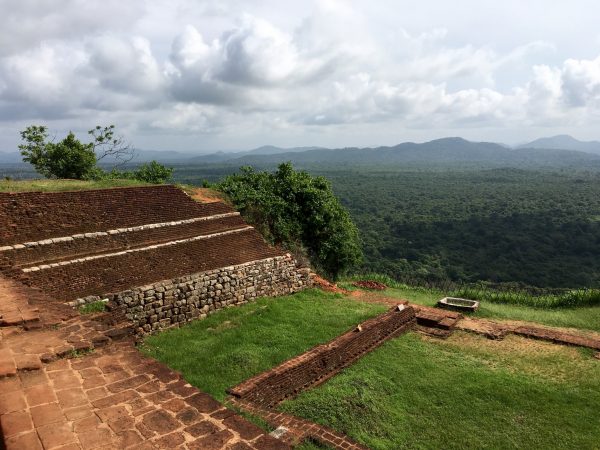 And this was a kings throne, where he was sitting and watching young beautiful women splashing in the pool. I was privileged to sit there for a while, quietly absorbing Sri Lanka’s history. The beauty of the moment was enhanced by the rising sun and light warm breeze. 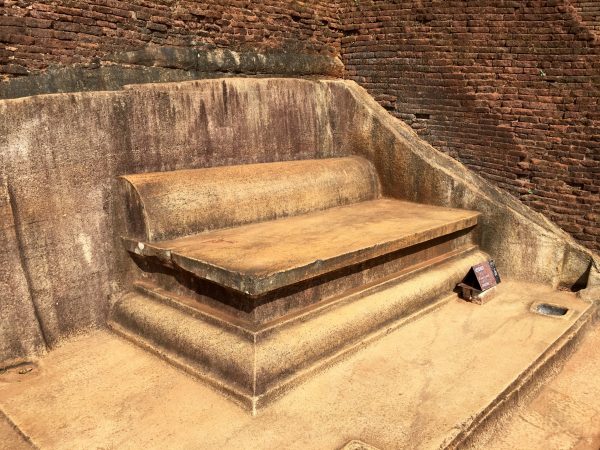 Sadly, not  much left of the secluded swimming pool. Maybe I have a wild imagination, but I almost could see girls splashing each other and laughing. 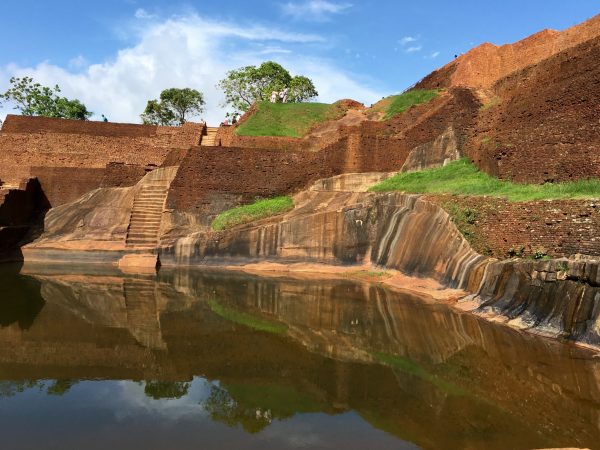 More of the ruins of the upper palace, which was just enormous. This was only tiny part of the whole site. 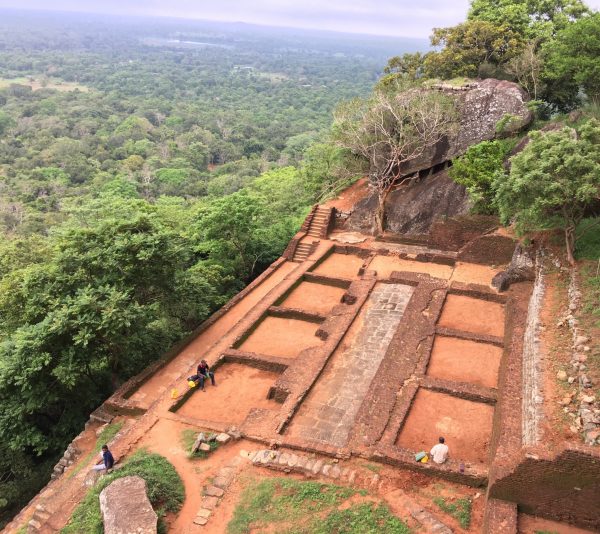 Restoration works are done in the same manner like the original construction. Painfully slow workers put small rocks in place and cement them with clay mixture. Unfortunately, there is not enough funds for restoration despite entry charges being very high. 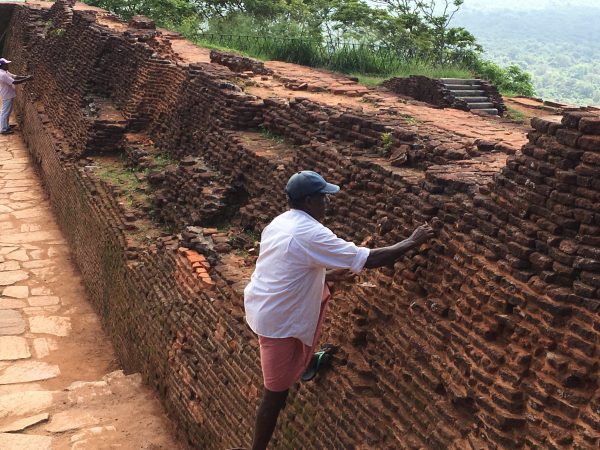 Dogs are welcome in Sri Lanka everywhere, including Sigiriya. I think this dog with puppies belong to the group of workers as I saw them feeding the mother with some scraps . And she was enjoying her food until her puppies found her. This cute group became a star of the moment as lots of visitors rushed here to take photos of feeding time. 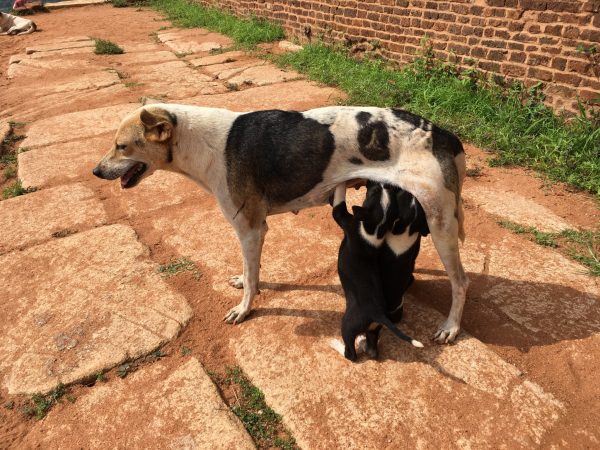 I took this photo not to demonstrate  the ruins of rotunda or the thermite mound,  but to show tiny steps in the background along the wall. This is how all supplies were taken up to the top. I still struggle to understand how it was possible. How could anybody climb up, let along to carry royalty or heavy loads? 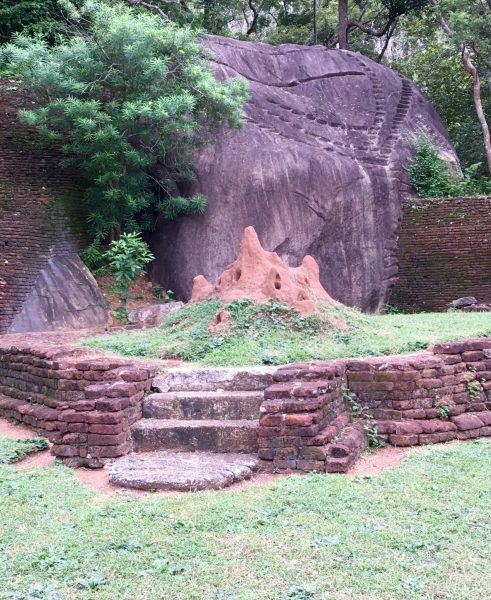 On my way out I decided to visit Cobra Hood Cave, which was guarded by this granite snake. I was told that it’s a natural formation, while  locals believed that the cobra was guarding the King and the Buddha’s  Tooth. It was a spectacular sight against the high blue skies and lush green vegetation. 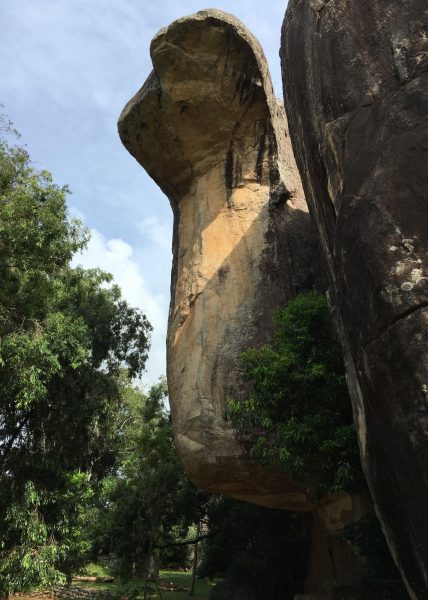 Unfortunately this grandeur was not very long lived. The ancient city of Sigiriya flourished for only 18 years until King Kashayapa death, and later it was slowly abandoned. The Tooth relic relocated to Kandy and spectacular temple was erected in the middle of the town.

But that is another story!!!!