Driver from Pakistan, in his late twenties

The things I learn in taxis …….

This time my usual driver could not make it, so he sent one of the guys from his team to take me to the airport.  I was a bit upset about it, but in the end it worked out well. This guy Syed was a part-time student (Master of Accounting), part-time driver. Originally from Pakistan, he has been living in Australia for the last three years. Our conversation was very interesting and eye-opening.

During this loooong trip (lots of roadwork on the freeway) we discussed three main topics.

1. Is it safe to travel to Pakistan and if it’s worth the risk?

According to Syed, Pakistan is quite safe even to the single traveler like me, a typical Western woman. The only problem areas in his country are in the West near the Afghan Border. People there are under Taliban influence, follow Sharia Law and don’t respect women at all. In other parts of Pakistan people are genuine and welcoming. Ladies don’t wear burkas or cover their faces. The only requirements are to wear long sleeves and cover the knees, but it goes for men as well. There are lots of places to see and experience in Karachi, Lahore, Islamabad and Hyderabad. (Yes, there is  Hyderabad in Pakistan as well as in India). We talked about my trips to India and particularly Jammu and Kashmir. And somehow we moved to the Pakistani cuisine.

2. What does Zaika means?

The food in Pakistan is similar to Indian, but not as hot: they use lots of herbs and very little chili. He mentioned word “Zaika” a few times  and asked what it means. I have seen a few places in Melbourne and other cities with this name and I always thought that they are Russian restaurants. ( “Zaika” means cute little bunny in Russian). However, from Urdu it translates like savoury or tasty. How interesting! Now I am even more curious to go and try this food.

While working in Newcastle recently, I went out looking for a place to have dinner. Walking down one street I saw quite a few restaurants where men were smoking Shisha or water pipe. I decided to ask my driver about this tradition. Syed told me the main advantage of Shisha is the flavoured tobacco. If someone fancies an apple or  blackberry taste – no problems. However,  Shisha is much more potent than cigarettes, therefore is much more damaging than any other type of smoking. Men and women in the East loooove Shisha and have always loved it.

In Melbourne in the western suburbs there are lots of small restaurants where people can have a smoke. According to Syed half of them are women. Despite smoking in public places being totally prohibited in Australia because it’s potentially causing cardiovascular disease and cancer, shishas or water pipes somehow slipped through the loop.

Curious, I did a search on the internet and found many similar places in Melbourne. Here is one of them.

Looks pretty snazzy and inviting. It’s a shame I don’t have any reason to visit this place as I don’t smoke!!! 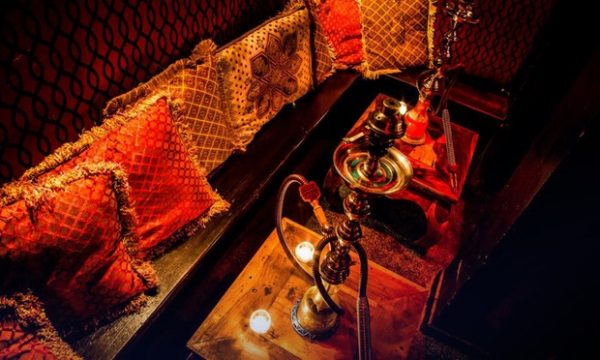