I  am in Perth, Western Australia. Work, not leisure. My recent visit “coincidentally” was aligned with the art exhibition Sculptures by the Sea. Again. I love this event as it gives me the opportunity to check out the modern art of Australian and foreign artists. Twice before I was surprised beyond my imagination.

Just a bit of history. David Handley, who later became a Founding Director, visited a sculpture park in  Klatovy, Northern Bohemia in 1995. He was so impressed with exhibits, that he  wanted to re-create something  similar in Australia. Bondi beach with its beautiful coastal walk was a obvious choice. Two years later the very first art event ‘Sculpture by the Sea’ took place.  Sixty-three sculptures were on display. The whole exhibition was installed and dismantled in one day ( I find it very difficult to understand, considering the large size of some artwork). Anyway, it was a huge success and the event was organised every year since. The fact that the exhibition was free to public definitely contributed to popularity among local and international visitors.

In 2005 Sculptures by the Sea was held in Western Australia at Cottesloe. For two weeks each year the beach precinct is transformed into huge sculpture park. It’s getting more and more popular with the Australian  and international artists, as well as the visitors. Just look at me – it’s my third time here.

Some of the photos are taken twice as they look totally different at sunset and sunrise , and I was lucky enough to visit this event twice.

How cute is this rusty kangaroo with his heart “on his sleeve”.

Striking by the size and bright orange colours this sculpture reminds me a turbine from the plane. But it’s not the turbine, it’s called “Origins”.

The next sculpture was the winner  of the Rio Tinto Award of $50000. “Column of Sound” was produced by Harsha Vardhan Durugadda from India. It was decided to install this sculpture for a permanent display in the City of Busselton.

This large twisted lump of wrought iron was named I.H.W.M.A. I never found out the meaning of the mysterious abbreviation.

Japanese artist called his sculpture a Japanese name, obviously. I don’t speak this language, but common sense tells me that translation will be Tail of the Whale. Am I right?

The next exhibit is all about plastic waste, which was skilfully arranged into different shapes. Unfortunately, it’s waste nonetheless.

The next sculpture won Emerging Sculptor Mentoring program, worth $10000 and 12 months work experience with a local artist of the choice. Interestingly, it went to  a first time exhibitor Hayley Bahr.

‘CAnsumerism’ which is a large scale soft drink can that functions as a printing press. I am not sure where is the connection with the printing press, because inside there are some random things like a chair and a hammock, which I thought would better represent an emergency shelter for homeless people.

A squashed car, which is covered with slogans like “Driven into debt”, ” Blowout” and “Broken promises” screamed suicide to me. And it was presented like a crime scene. But not… This represents the tragedy of the Western Power (electricity supply) company, which was not really performing well enough.

When I saw this art complex in the darkness, I thought they are just rubbish bags filled with soil. I went into my sarcastic state of mind regarding modern art.

However, when I came to the same sculptures in the morning, I was terrified as each one of them looked like dead people in different poses.

They are made from solid piece of stone.

I stood there for a while and an incredible sadness started to fill my soul.

Bright and colourful tents represent homelessness. Each cover consists of hundred small pieces of tarp  roughly sawed together. Looks like emergency accommodation to me.

This is a similar idea. All structures are made from small pieces of wood not very carefully nailed together.

I totally loved this girl. It’s made from plastic and the colours represent different depth of the ocean.

From lighter colours close to the surface to darker colours as you go deeper. I came to tell her a personal goodbye.

One of those abstract structures, which I like to criticise. Rusty metal sticks with slightly coloured random pieces of plastic supposed to be sea animals.

Another art work by Japanese sculptor. At least it’s bright and colourful.

Love this one. Princes and the Pea. Very clever. No Princess though, she went to soak in the ocean, I presume.

I saw something similar and equally disturbing in Jakarta. Chairs and chickens don’t go well together.

This is an interesting concept, I think. This is an anemone, which consumes people, ships, sea animals.

This is a close up of one of the tentacles.

From afar it looked like a really old car. But in reality it’s a metal frame with a painted plastic stretched all over it.

I like the name of this sculpture. With a stretch of imagination I can even see the correlation with an actual exhibit.

This structure represents a grain of sand. Fits well into the theme of the art and the ocean.

Not sure why they are called tumbleweed. More like the sea sponges.

This is a typical abstract installation, which supposed to be an art object. The artists probably visualised it like a masterpiece. Let me explain a concept as it’s not very clear from the photo. Imagine a group of 5-6 trees growing in close proximity to each other ( say, 4-5 metres apart). The artists took some string, stretched it between the trees in random directions and here it is. Why don’t we all try that at our backyards?

This sculpture was presented in a  category Invited Artist and made by the very significant British artist Sir Tony Cragg. He developed his style of monumental and complex bronze sculptures where profiles appear and disappear from the surface. This work exemplifies the artist’s continued and prolific sculptural push over the past 40 years toward a newly abstracted understanding of the human figure that questions why we are as we are, and why we look like we do.

A large piece of wrought metal mesh wrapped around a tree trunk.

Creative use of  fine steel wool. Fluff it up, put on top of the metal frame and that will represent a surf and clouds with people stuck between sky and the water.

I like this sculpture. This is called Loyalty. A bit concerned about safety issues of the person standing on the flimsy structure of turned upside down chairs though.

Another great object, which was presented at the Invited Artists category. Zadok Ben-David was born in Yemen, but currently resides in London. His monumental figurative corten steel sculpture Big Boy (2016), presented for its inaugural showing at Sculpture by the Sea, is from the artist’s most recent body of work, inspired by travelling the world crossing paths with people, ‘People I Saw but Never Met’.

Man-fish or fish-man is striding towards the bright future.

Loved this one. ‘Tears of joy’. Great concept and delivery.

This is some scary stuff. Apparently, the artist has created a whole collection of the chairs with nautical theme, but only one of them was on display in Western Australia. Probably, it’s the most beloved  masterpiece with sentimental name “Dearest” (?!?). From the front is looks like ugly chair or day bed. But from the back various sea creatures like eels and octopie are trying to strangle each other.

Love in March is a little hopeful, a little sad. I wonder how it looks in May?

Great idea! There is no better way to represent the pressure. Just wait till it will blow up!

This would be added to my collection of pieces that I loved the most.

This particular snail shell looked fantastic in the evening, and even better at the sunrise.

You can compare how totally different this metal structure looks in different light. This one is at the sunrise.

I prefer it basking in the light of the setting sun.

Up in the trees I found this giant drop. The name did not give any clues what it is or why it’s there.

My personal award for the best sculpture was split between this huge glass ball and the boat (next). I still can’t decide which one deserves the first prize. It’s funny how my preference is different to the judges opinions.

How beautiful is this artwork! Everything reflects in the glass sphere upside down.

And finally Number One. My personal super-duper award goes to Leaden Heart. This time my opinion was similar to the experts.

The Western Australian Sculptor Scholarship of $10,000 was awarded to Denise Pepper from Perth for ‘Leaden Heart’.

This scholarship provides funds for the artist’s study, travel and the advancement of their career, together with an invitation to exhibit at Sculpture by the Sea, Bondi 2017 this October.

If only i could afford this boat!!!

And totally immune to all these  sculptures and visitors was a group of men, who were trying to recover lost gold jewellery from the sand and water – Goldseekers. 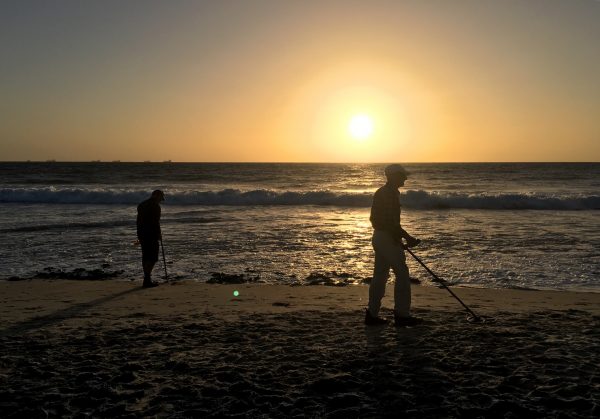