Our next visit was to Ritigala Reserve, which is a large ancient complex of caves and ruins of old temples.

Our driver Sada made sure we were there before the other tourists arrived, so we could enjoy the peace and quiet. This flagstone path took us up to the top, where old caves provided cover for the Buddhist monks a long time ago. This complex dates back to 4th century BC. 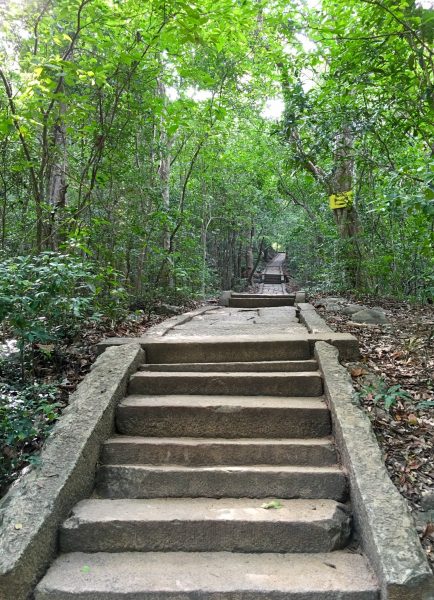 Surprisingly, this place is not very popular with tourists. And that’s a real shame, as Ritigala is really beautiful and spiritual. The broken stone temples are along the footpath, which takes visitors deep into the jungles. This particular place was an old hospital. 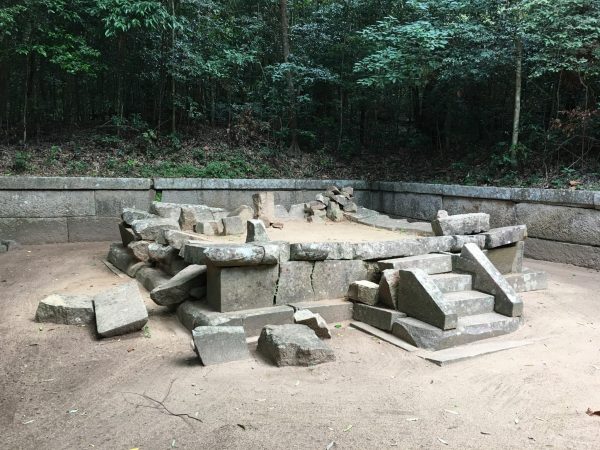 I could not understand how it worked, but apparently those bits and pieces were parts of “medical” equipment (according to the guide). No intricate carvings or painted images. This site was quite plain, but the presence of super energy was almost palpable. 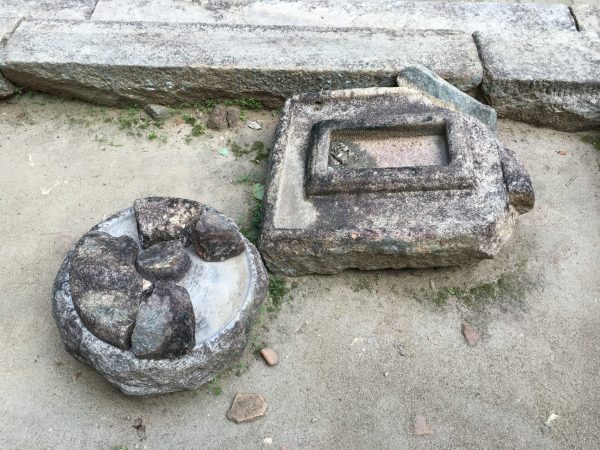 Huge trees were growing everywhere. In this case the root system is largely above ground. Technically, I am standing between large roots. I saw very similar trees in the Sumatra jungle. 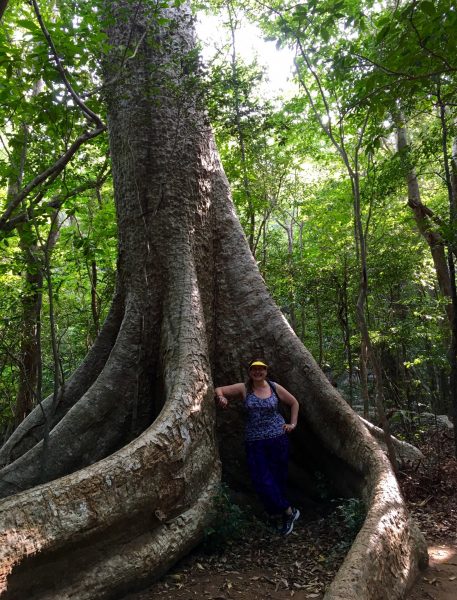 It was very interesting, but this place also has a mythological aspect to it. According to legend, Hanuman leapt from here to India to report to Rama about the place where the King of Lanka was hiding the beautiful princess Sita – Rama’s wife. When Hanuman – the Monkey God – left Sri Lanka, his numerous army of monkey soldiers was left behind. And they were watching us tirelessly. 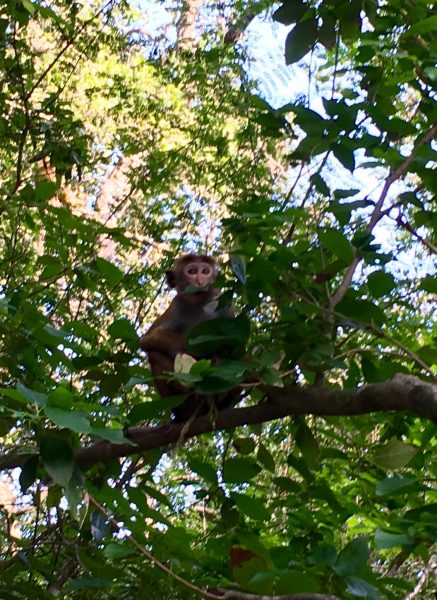 For long 300 years Polonnaruwa was a thriving religious and commercial place. The dynasties of Chola and Sinhalese Kings ruled  the country from this place.  In the 12th century Polonnaruwa reached its peak. The huge temple and palaces, parks and lakes were built by the Kings. Below is a Council Chamber. There is a special throne for the King made in the shape of a lion. 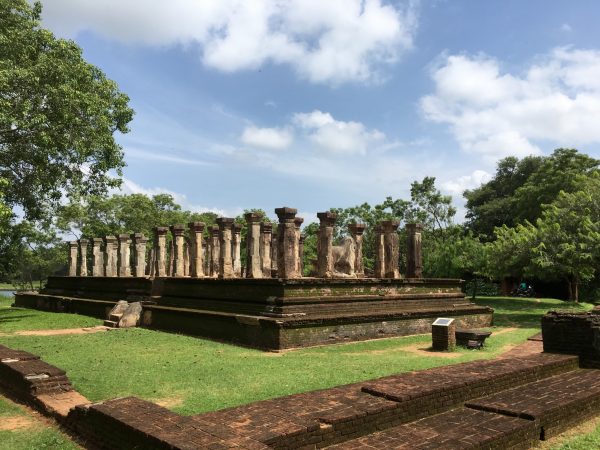 There was a cute little elephant in a tiny lake, which originally was full of lotus flowers and koi fish. 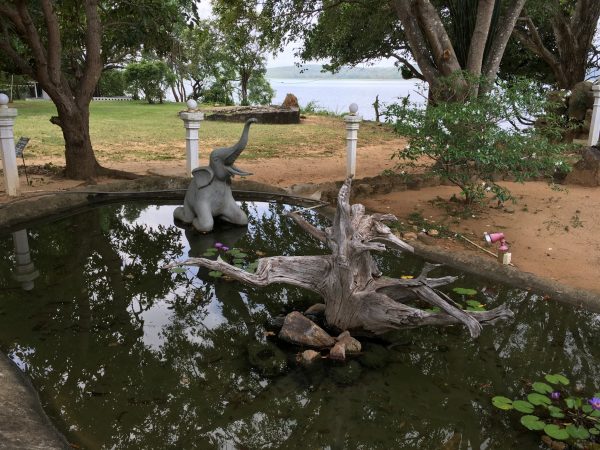 The ancient ruins have been declared  a World Heritage site by UNESCO not long ago. Here are the ruins of the Royal Palace – a very impressive building with the walls more than 1 metre thick. The roof collapsed a long time ago, but the foundation and the walls are still standing. 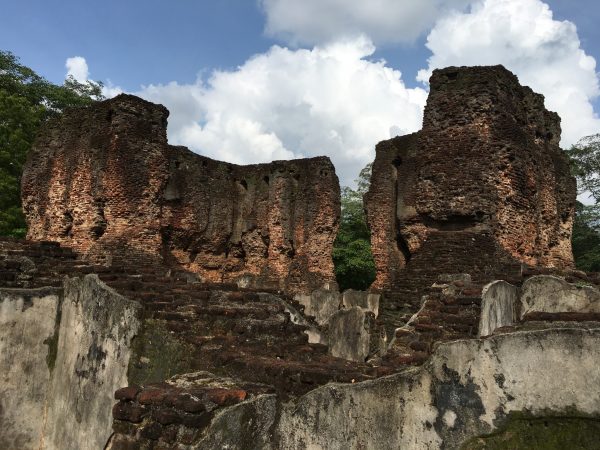 There were a huge number of fully dilapidated buildings while some were in a better state than others. The whole site is a large monument to the ancient culture, which has almost gone completely. 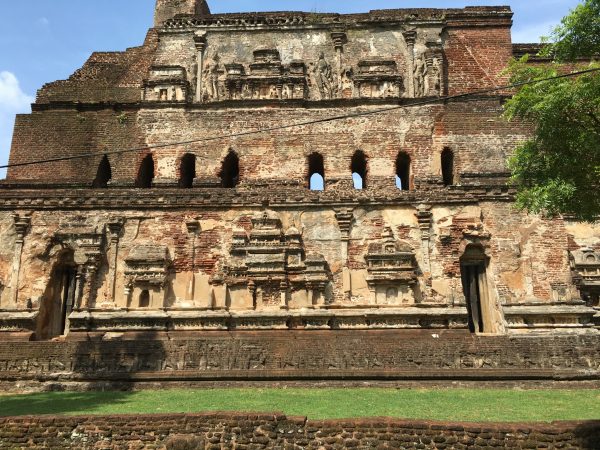 The attention to detail and workmanship are truly remarkable.  How could all those small figurines survive for hundreds of years? 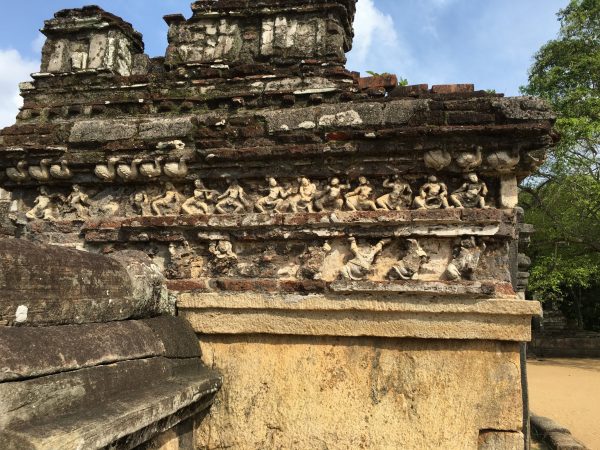 Rankoth Vehera – it’s the biggest stupa in Polonnaruwa, and its name literally means the Golden stupa. 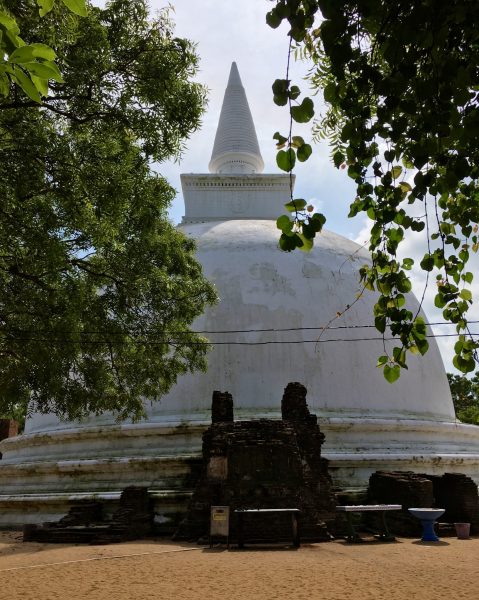 This dragonhead is not only a decoration, but it’s also a water spout. After heavy rains the water near the stupa runs towards the walls into small channels and pours outside the building. Pretty and practical. 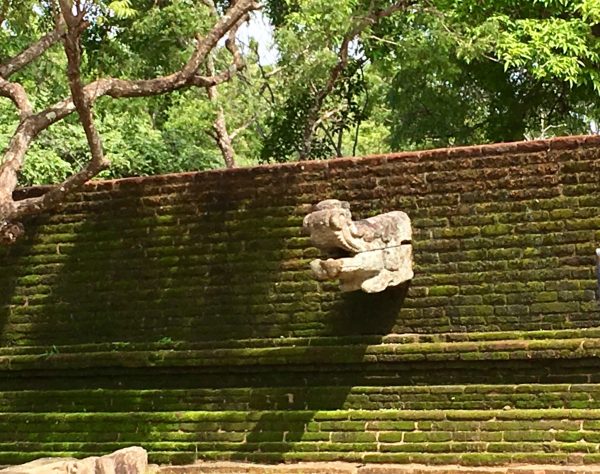 Inside one of the temples were many sculptures of Buddha in different states of disrepair. The most surprising thing was that in front all of them were fresh flowers placed in some order. I think the design represented some mantras. 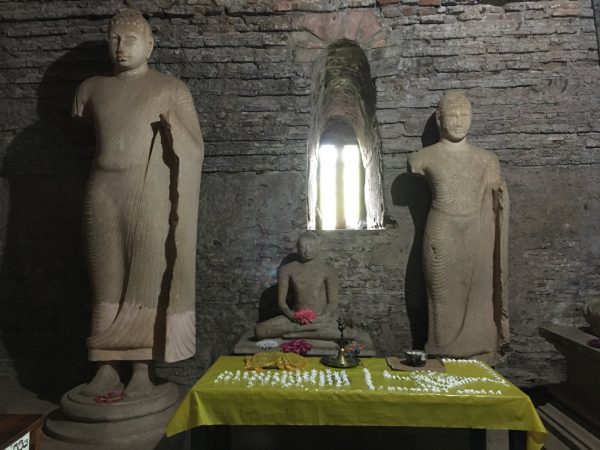 Our guide said that this Satmahal Prasada was built in 12th century and has a six-storey pyramid-shaped building. It has a similar shape to Cambodian temples. 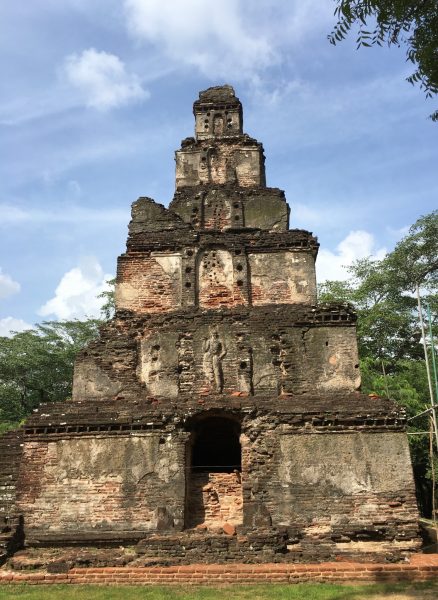 This is a well-preserved panel near one of the temples. I was really impressed with workmanship skills of the ancient artists. 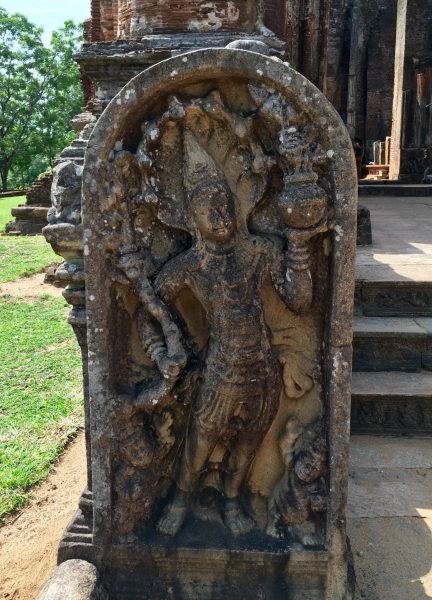 Historical Hindu temple Shiva Devalaya. Many people come here not only to do sightseeing, but actually to pray and worship their gods. I saw lots of fresh flowers, fruits and money being left there as offerings. Not sure about the gods, but the monkeys were really happy especially with the fruits and sweets. 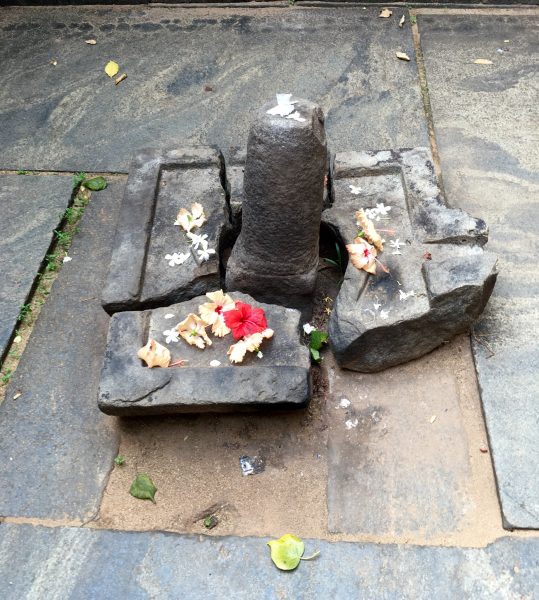 Polonnaruwa Vadatage is a typical Sri Lankan style structure, circular in shape, built around a small stupa. It was mainly for protection of the temple and as a shelter for devotees. The wooden roof collapsed, but 88 stone columns are still standing. 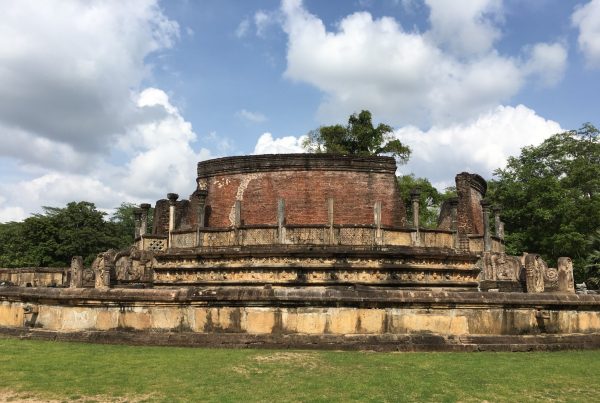 The surrounding walls were decorated with intricate carvings of gods and deities. 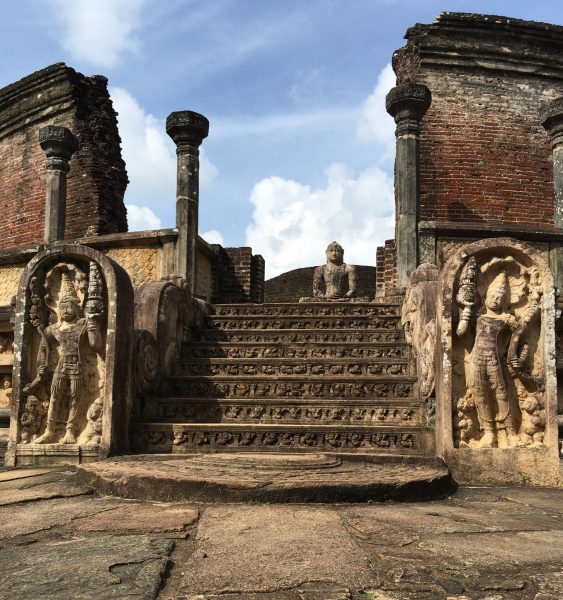 The most popular place in this historical complex is the Gal Vihara or rock temple of the Buddha. The statue shows the last moments of Buddha’s life before he entered Nirvana. Because Buddha reached enlightment in this life, he escaped samsara – the circle of life, which consists of the life-death-rebirth cycle. 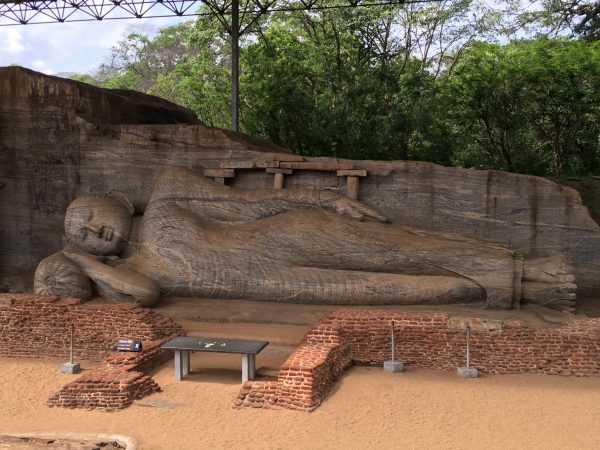 This is another one of four different images of Buddha carved in the rock. They were built in 1153-1186 by king Parakramabahu. 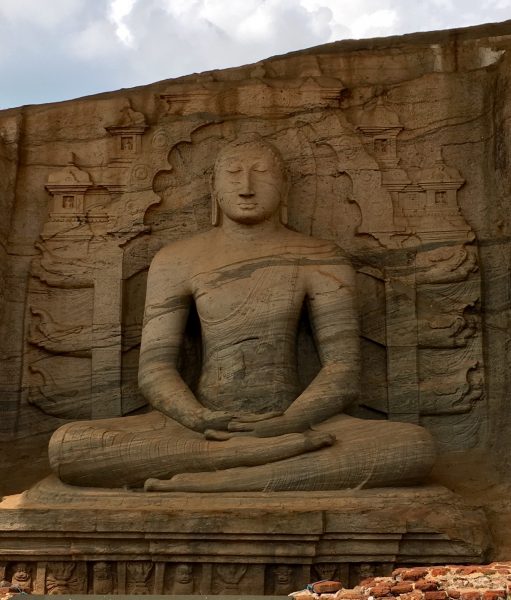 I found some interesting information about monks. The owner of my hotel in Kandy had the biggest rice cooker I have ever seen and also a huge metal pot. He and his wife helped the local temple with cooking rice for festivals and dyeing robes for the monks. When I asked about the big pot, he told me a story. “In the past,  the dead bodies were wrapped into white cloth and taken to the resting place. The body was unwrapped and the clothes discharged into a pile nearby. Due to post-mortem biological processes, the cloth was often stained with blood and body fluids, so nobody wanted it. The monks would come at night and pick up those rugs. They would cut them into small pieces, stitch those them back together and boil the cloth with natural dyes. As a result the monks would have orange, brown or green robe, which could be of use only to cover their bodies. Nobody in their right mind would steal or want those rugs. As the whole existence of monks is to serve God and not to be distracted by any desires, the purpose was served: monks would wear rugs and they didn’t cause any desires. And the pot is to dye their robes.” 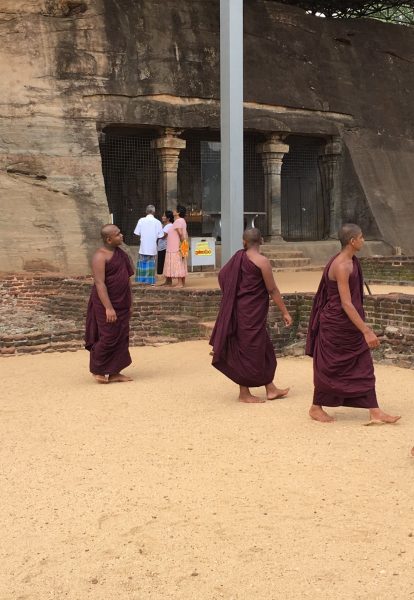 This small panel with a carving of an elephant was a wall decoration. I found it very strange that the brick wall was totally covered with moss, but the panel was clean. Maybe it was washed prior or covered with some special protective spray, but I doubt it. 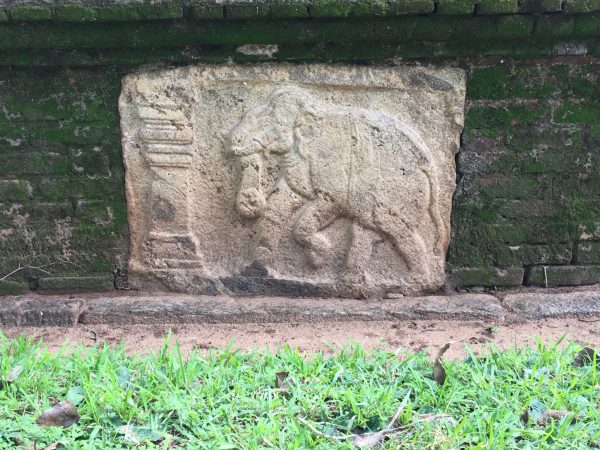 This is Kumara Pokuna – royal baths made out of granite slabs. This water tank was built inside the Palace Complex and consisted of two pools. It’s a very advanced system of underground wells and pipes with water filters and was installed to provide the desired relief in the hot climate. 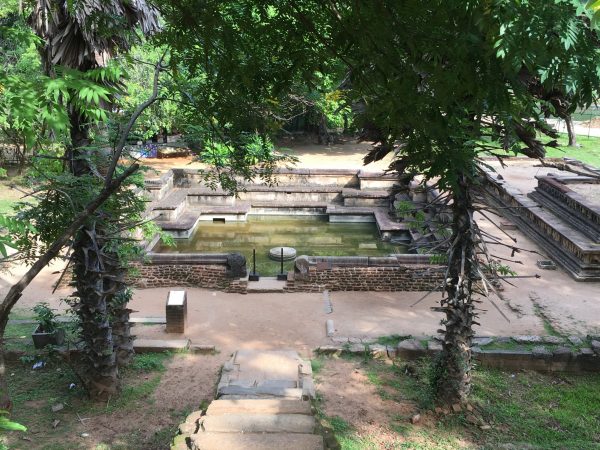 As soon as I appeared from around the corner this man offered me to have a look at a dancing cobra. Without waiting for an answer, he opened a flat basket and started waiving his hands. A small angry snake jumped into action. The next moment he offered me to touch the python. All that time he repeated that it was a free show. 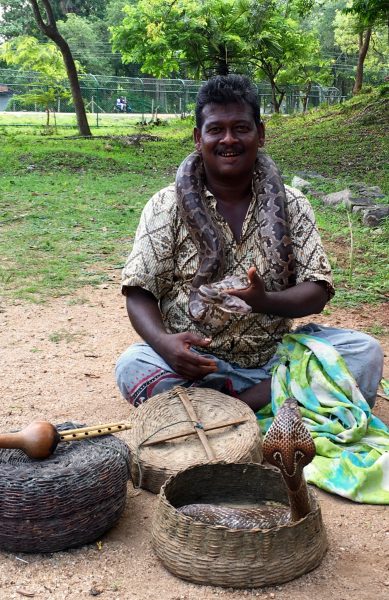 Of course I refused to touch the python and was very worried about the cobra. The man happily told me that he pulled out the fangs from the cobra, so it was totally harmless. That fact made me incredibly angry, because the poor cobra must have suffered so much. Furious, I turned around and started to leave. This man got upset and demanded 500 rupees. A few more young men came to us. Luckily, it was not my first time in Asia and generally I am not easily scared. I walked away, while he was screaming something. Probably he cursed me, but since I did not understand it, the curse was not going to affect me. 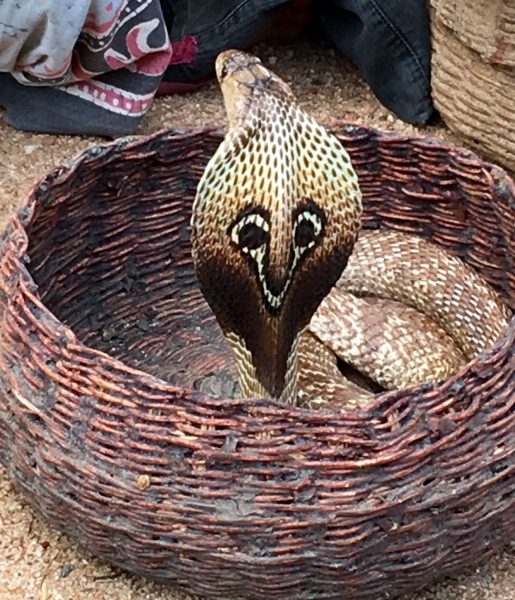 In a different complex I found a very strange construction. The guidebook confirmed my suspicions that it was a septic system. This one was a toilet for one person (the surrounding walls collapsed already), but nearby was a public toilet, where many monks could “participate” in this private activity together. 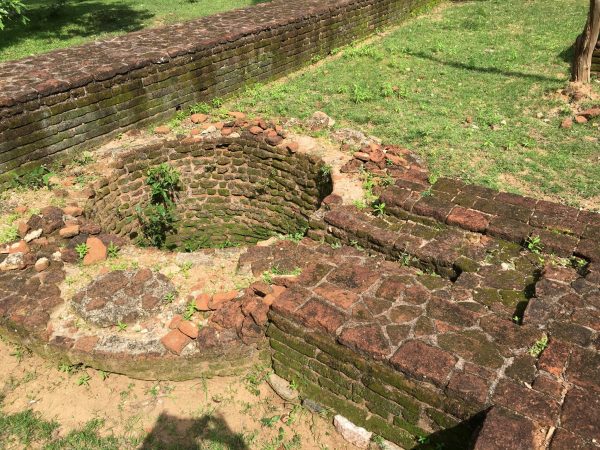 In front of all the temples there was a beautifully carved semi-circular granite slab. It is called moonstone. This tradition came from India at the same time with Buddhism. It is usually either totally flat or forms the first flight of stairs. Lotus flowers, birds, elephants, leaves and buds were very common and signified fertility and growth. 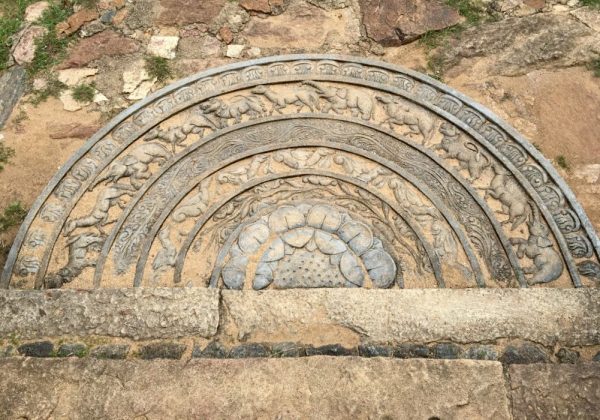 This temple is presumably the oldest building in the sacred Quadrangle. The evidence suggests that this was the Temple of the Tooth built in 1055-1110. Originally it was a two-storey building. The second storey was made from wood and it totally deteriorated and collapsed. But the granite foundation and the walls are still standing. At this place, for the first time in my life I felt the presence of some sort of energy. I actually had an urge to come to the wall and lean against it with my eyes closed. It was such an amazing feeling. 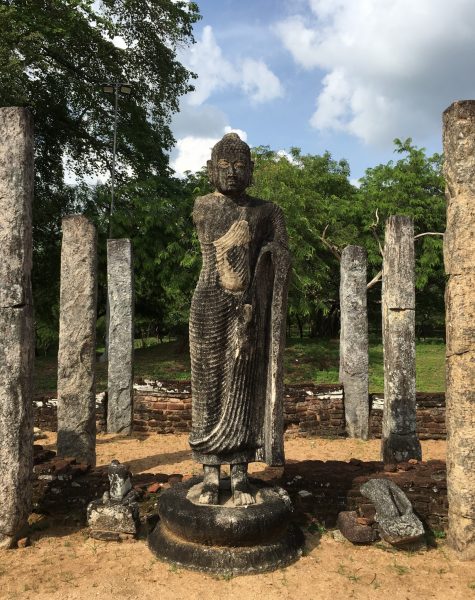 This is it. Buddha left…. 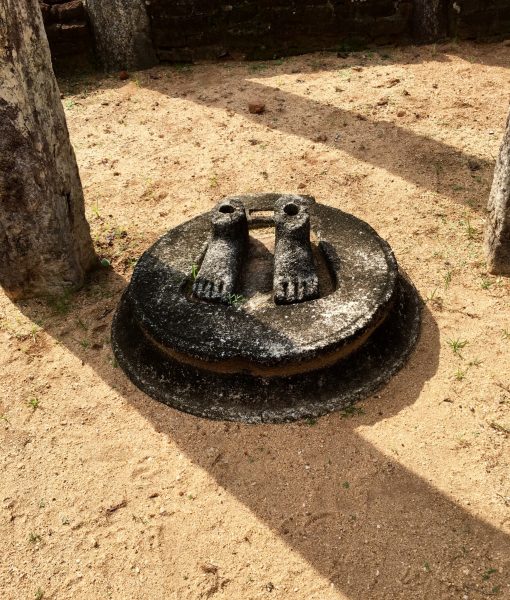