On the way to the border, our driver decided to show us an interesting natural phenomenon – a huge balancing rock. We happily agreed.

(I noticed that entry fees in Meghalaya are really cheap, 10-50 rupees even for a foreigner. It’s a nice change from Himachal or Uttar Pradesh). 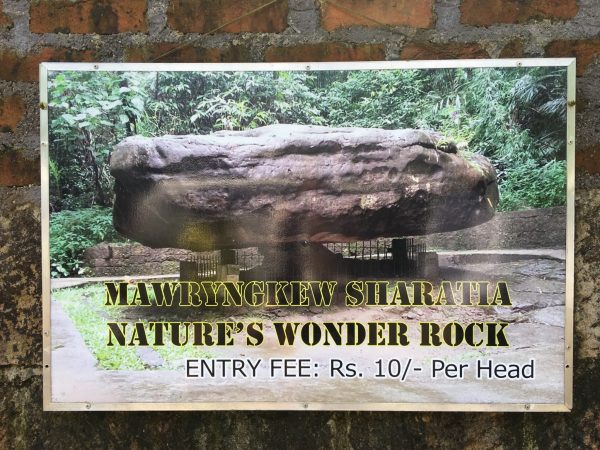 Eating rice 3 times per day (typical meals in this state) made me very strong. Strong enough to carry this huge boulder – no problems! Bring it on! 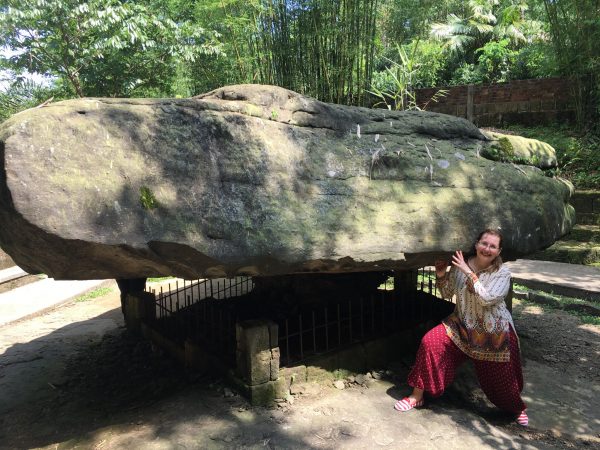 The very first time I got a glimpse of Bangladesh was from the cleanest village in Asia. There we climbed into the tree-house in order to see it from far away. 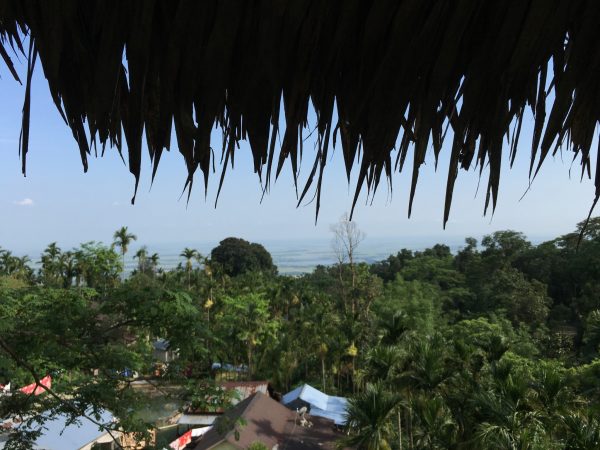 One lookout on the way gave us another chance to get ready for our Bangladesh encounter. 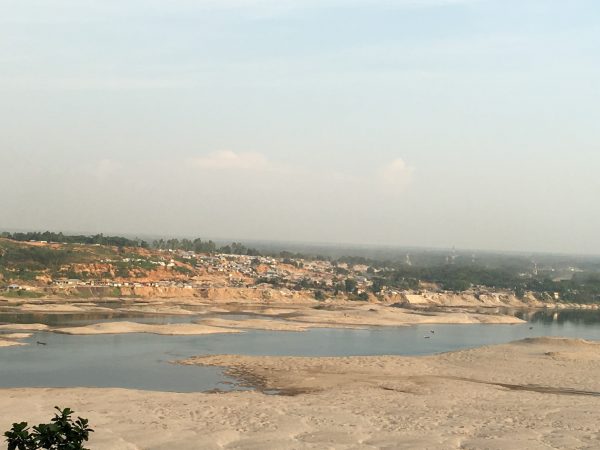 Very interesting that the Indian side is covered in mountains, while Bangladesh is on the plains. We are still in India, looking back on the last bridge. 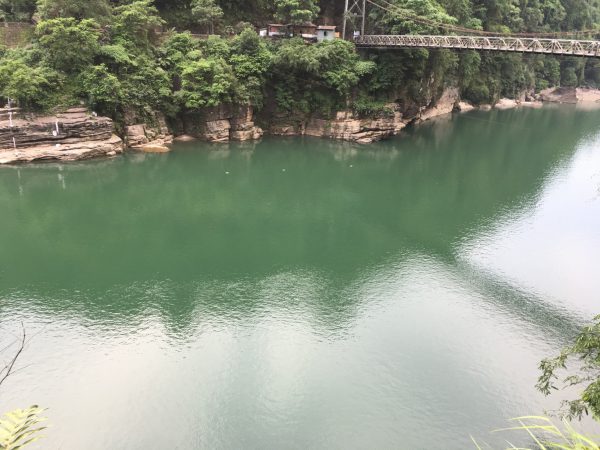 This is the real colour of the water. Beautiful green. 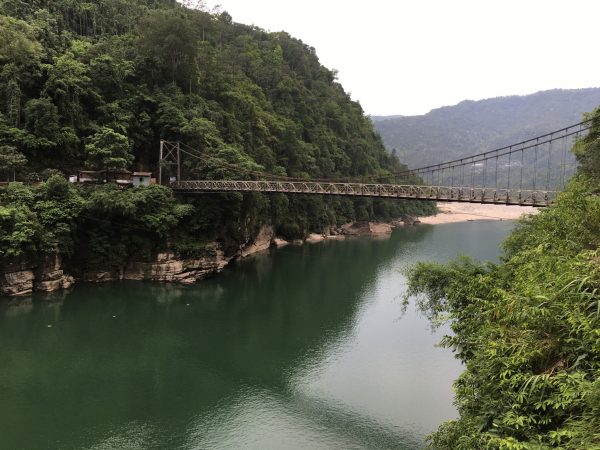 More and more trucks on the road. Very difficult to get through. Finally we got to this sign. Time to park the car and go on foot. 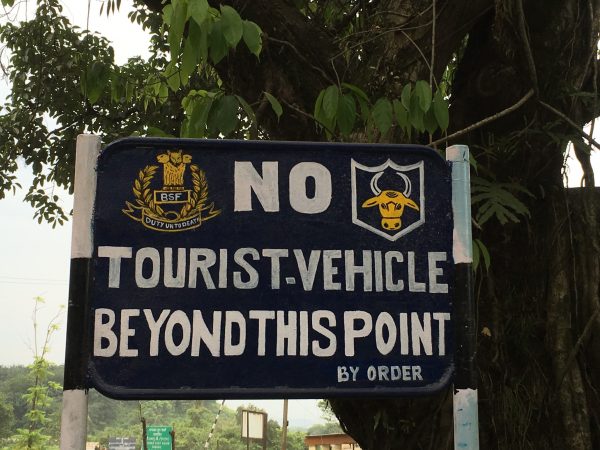 The next sign sign welcomed us to India. It’s a bit bizarre unless someone is coming from Bangladesh side. 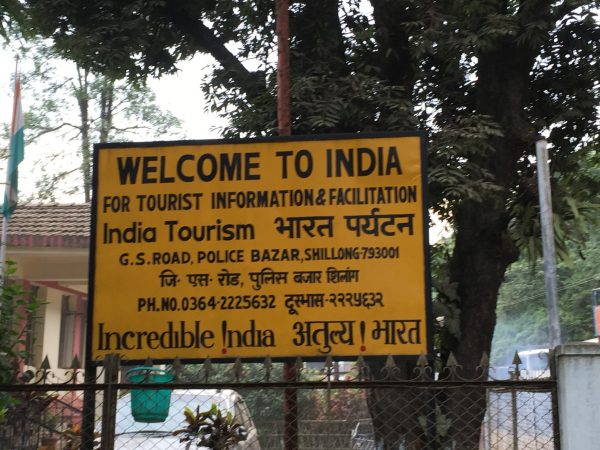 Here it is! The Indian border. Behind me is my beloved India. This sign is the very last Indian attribute. The next 100 metres are no-man’s-land. These two countries have more than four thousands of kilometres of protected borders. The International Border  runs between the six divisions of Bangladesh and the Indian states. It is the fifth longest land border in the world. 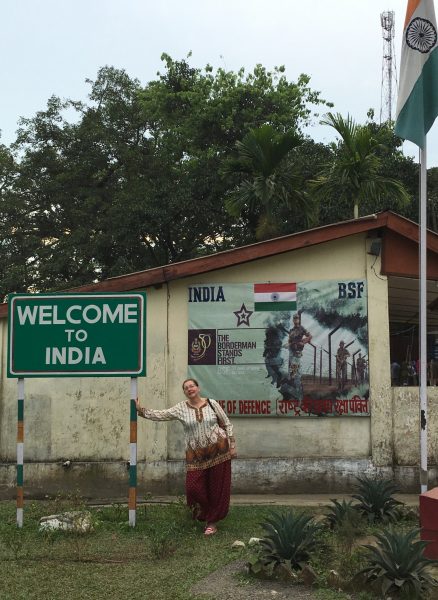 The Indian border is well-protected by Border Security Force. 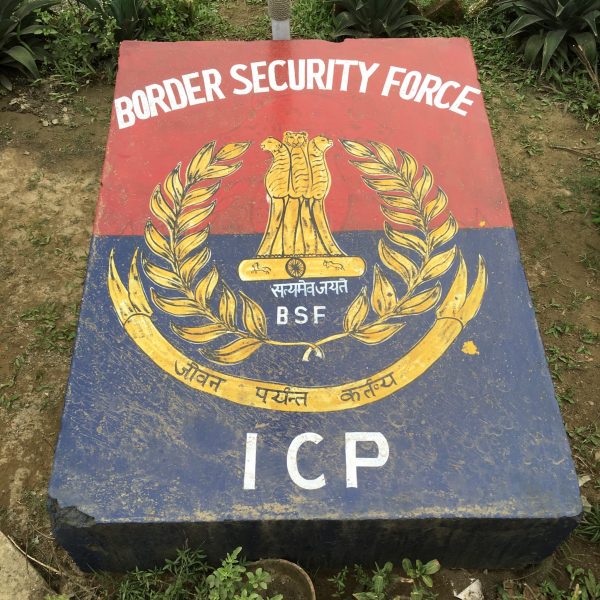 A family from Bangladesh were escorted by a Bangladeshi soldier to take photo under the sign. 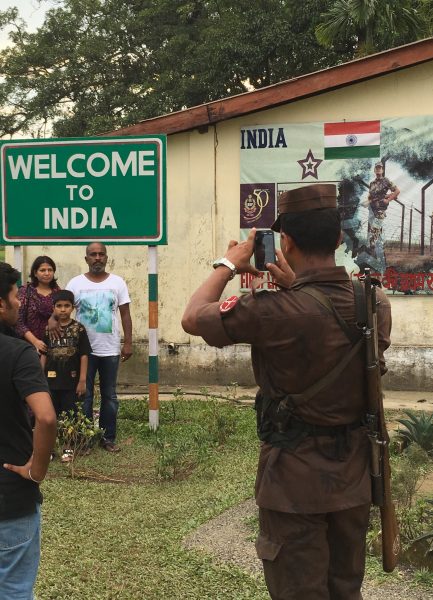 It was a bit scary to walk through no-man’s-land among tourists from both sides, military and constantly moving trucks, but I just had to take this photo. For a split second I had an idea to cross the border and immortalise such an event. But something stopped me. Apparently, when I started marching to the borderline, one of the Indian officers ran after me, trying to stop it from happening. My friend Sangeeta assured him that I didn’t have any intentions to cross the border, just to take a photo. He then explained that I could be captured, imprisoned or shot. That sounded like an interesting finale to my trip. 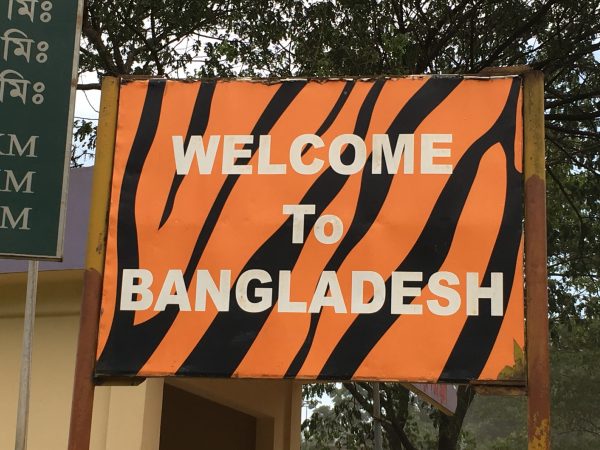 And this is the countryside in Bangladesh. Nice and peaceful. The little creek is an actual divider. 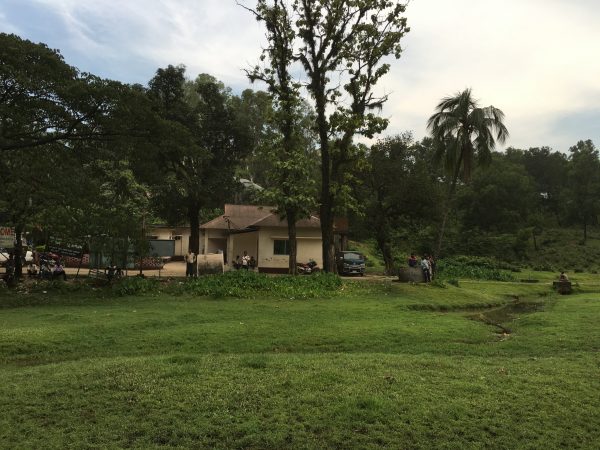 Since India has all the mountains, they sell crushed rocks to Bangladesh. Trucks are loaded not far from the border, transported about 1-2 km, where they unload the rocks and return to India. There is a non-stop traffic. 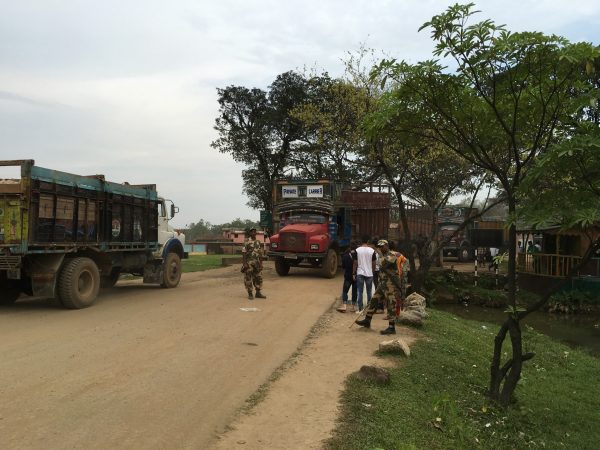 After my “near miss excursion” to Bangladesh, I was very glad to be back to my India. Have a look how we are hugging this friendly comforting sign. It’s like coming home. 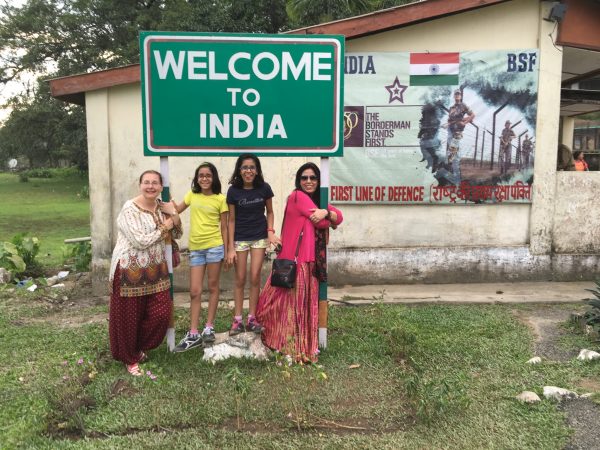 A bit further was another road sign informing us that we have more than 3 hours of horrible mountain roads to conquer before we finally could stretch out in our beds. (Yes, 83 kilometres takes that long to travel. I am talking about India, of course). 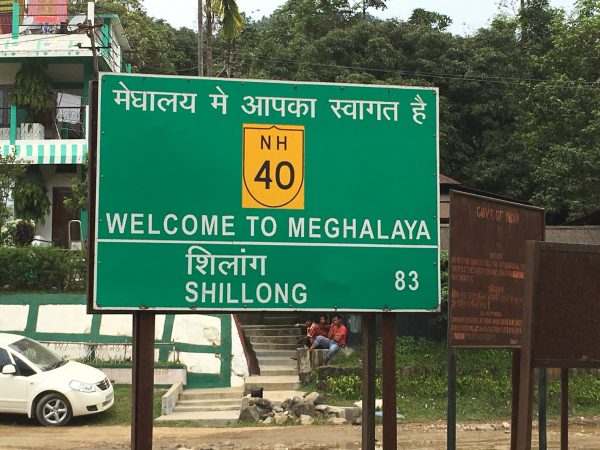 I found this trip to be very exciting. I don’t know if I’d ever go to Bangladesh, so it was probably my only chance to see this country. Under this sign we met a customs official who invited us for a cup of tea and a chat. Honestly, I expected some trouble because of my irresponsible behaviour, but I was wrong. Not very often foreigners come to this place, so the officer was just curious about such an interesting group of tourists: an Indian family with two kids and a stranger. 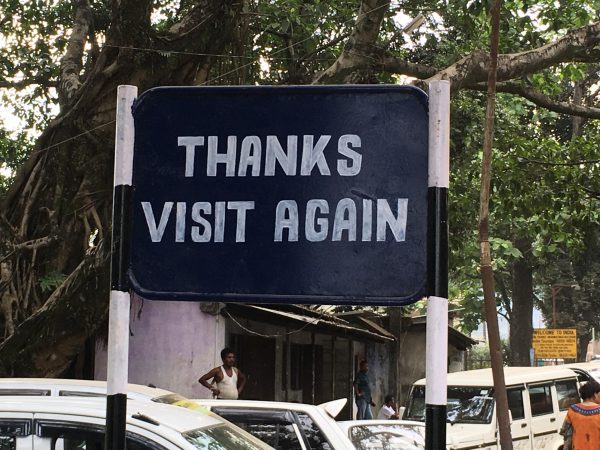 These two nice ladies were cooking something when we arrived. Quickly the kettle was put to boil and we had a cup of strong masala tea in just a moment. 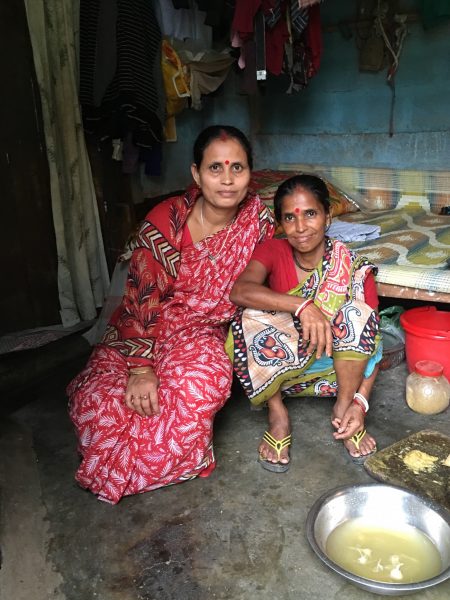 Of course we had to commemorate our arrival to the customs premises. Here we are. This guy was a bit concerned when he took us outside to the back, as I wandered close to the creek (again). 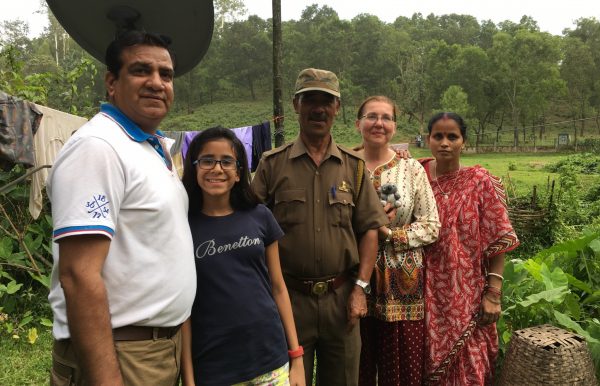 The Indian border is well-protected when strong guys like him guard it 24/7. 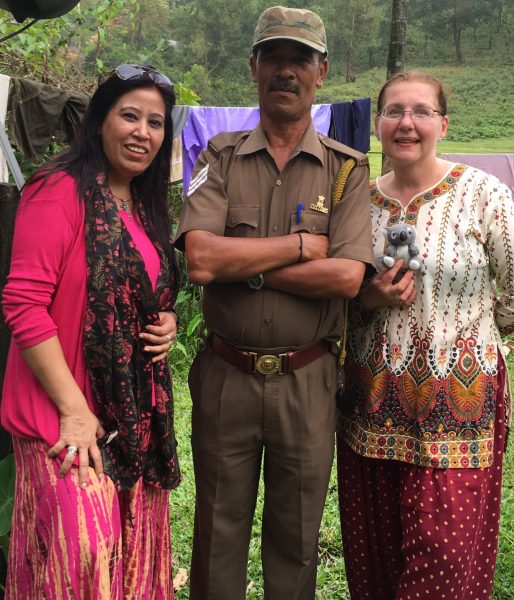 Very happy and content, we parted with friendly staff and settled for a long journey back. Halfway through our drive I noticed strange clouds, which appeared to be coming from the ground. I swear they were not up in the sky, it’s not a trick or optical illusion. They were totally vertical.

A few not very scientific theories regarding this mystical appearance were tossed back and forth in the car, before we all fell asleep. Bangladesh was left far behind. 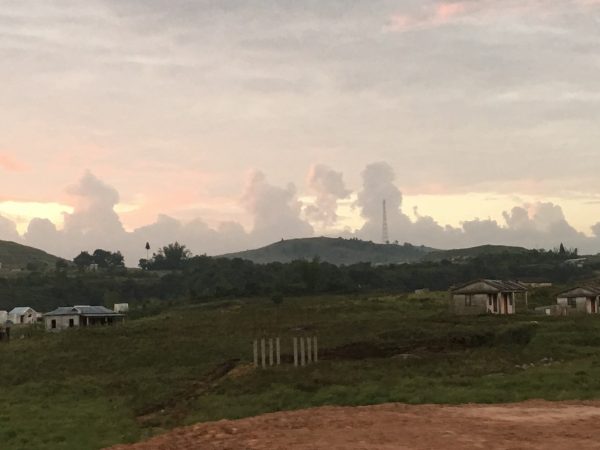