Our next stop was the Museum of Sumatera – this is the Indonesian name of the island. The museum is supposed to be an interesting place with lots of artefacts related to pre-religious past, colonial times and struggle for independence. The top of the building is decorated with a buffalo head, which represents the strength of the nation and good luck. However, the right part of the head fell off during a big storm. I am not sure why it has not been repaired as to me it looks like its strength has been compromised. Or maybe its luck is running out?

Anyway, due to Easter Friday being a public holiday in Sumatra, the museum was closed. I don’t know why it was so, because tourists and people are not working , and this is a perfect opportunity to visit the museum.

While my guide was telling me a story about Sumatra’s past, I noticed a group of school children in uniform gathering near all the entrances to the Museum. Murat commented that they were scouts and they have some history classes on the day as well as some training. I didn’t see any teachers, but one person in each group was definitely a leader, and everybody followed their directions. Being a scout is a compulsory part of school life and they pretty much learn the same skills as scouts all over the world. 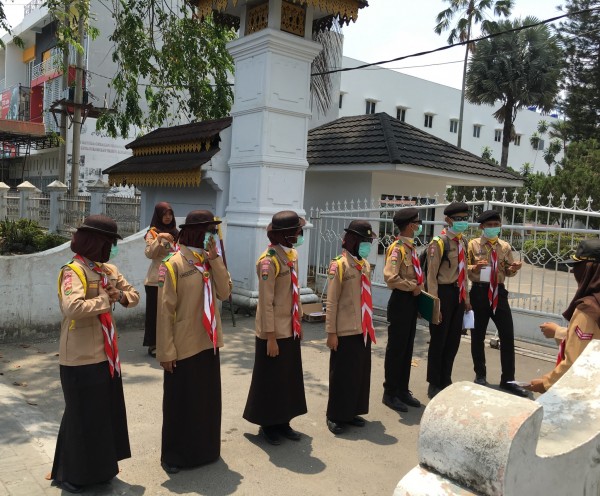 Further down the road we saw this sculpture, which symbolises the Indonesian fight for independence. Indonesia was totally independent only for a short period of time. This country had a very turbulent past with the Dutch and Japanese taking turns in invading Indonesia. Even Marco Polo visited it once in 1292. And in 1961 an agreement was signed in Jakarta with the Soviet Union to buy arms with long term loans. 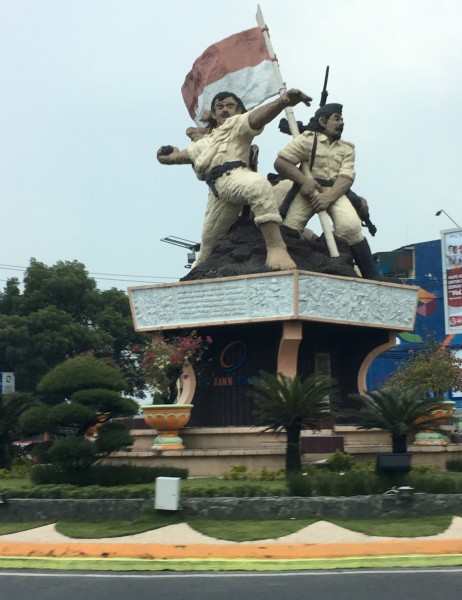 My guide told me that despite their bad reputation, Muslims are very peaceful people. Apparently at the airport there is a huge banner that says “ISIS IS NOT ISLAM”. I didn’t see it myself, or maybe it was not in English.

There are large and small mosques are everywhere. This is no wonder as basically all Indonesians are Muslims. I noticed that the mosques here are not very tall and have very large domes on the top. Quite a few of them have silver domes, and the rest are green. 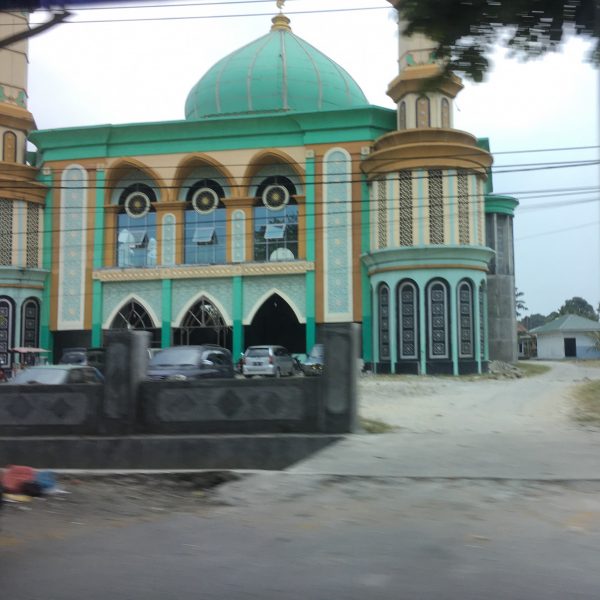 In the rich part of Medan we  could see large mansions, where politicians, famous actors and successful businessmen lived in luxury. 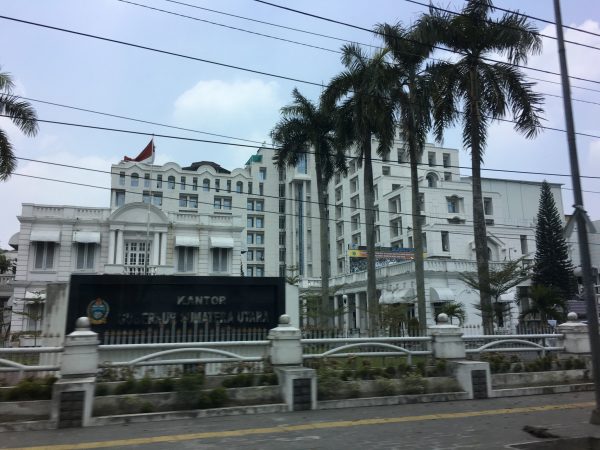 Since I told Murad about my love and devotion to India, he decided to pleasantly surprise me. After circling for a while we suddenly stopped in front of a Hindu Temple. Unfortunately it was closed. I don’t know if it was because we were there after 12 pm, or because of Easter.

It was not a particularly large temple, but it was so unexpected in Indonesia.

Lots of small sculptures around the temple. I was surprised by this strange green colour, and my guide didn’t know any more than me about it either. 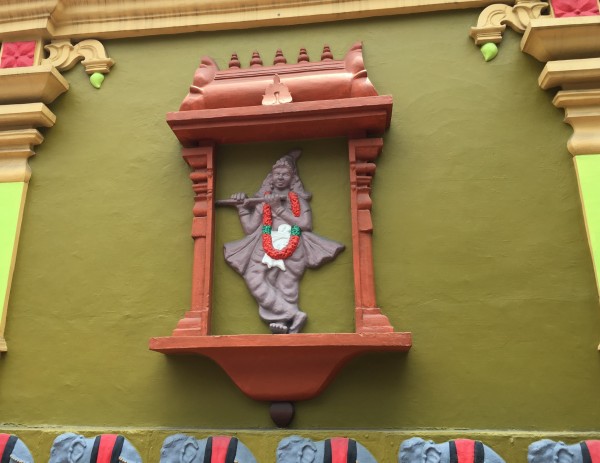 Next to the temple I also found a Gurdwara. That was totally strange. I wonder how many Sikhs live in Medan (I personally did not see one). My guide did not even know what Sihkism was. So finally, it was my time to enlighten him on this subject. I saw lots of gurdwaras in India and many of my friends are Sikhs. Sadly, it was closed too.

Our next stop was a Buddhist temple. I saw a lot of Buddhist temples in Vietnam and Ladakh, but this one was a bit different. Murad said that it was  of Chinese influence.

This is a side view. To me it looks like a small ship sailing through time. Apparently traditional  Indonesian architecture is really based on the image of large colonial ships, which came here in the 15th and 16th centuries.

Lots of red everywhere, because the Chinese consider red colour to be lucky. 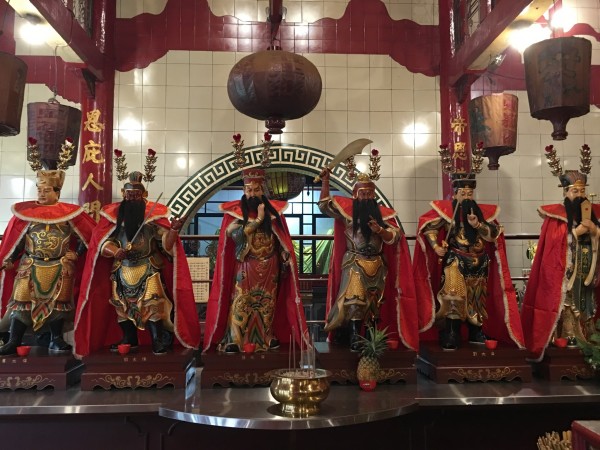 Many statues are hiding in the small niches around the temple. 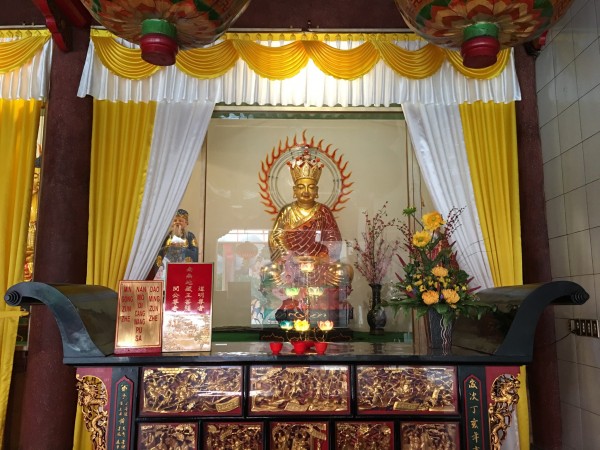 This is a dome in progress. In the back of the temple was a large shed with all decorations and broken statues as well as a small workshop. This dome was made for the coming Buddhist festival. 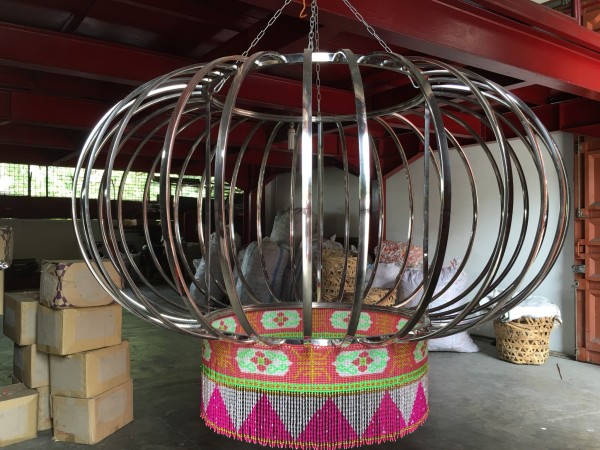 No idea why, but I have a strange attraction to these cute lions/dogs. They are supposed to look fierce and scary, but they did not here.

Here is another cute lion. I could not help myself, so I sneaked behind my guide and patted this lovely creature. 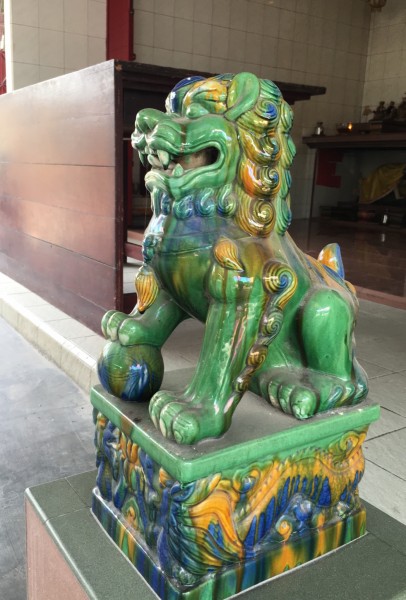 This is a special burning tower, where believers incinerate paper money and and small cards with their sacred wishes. They believe that the smoke will reach Buddha, and he will attend to the needs of each person. 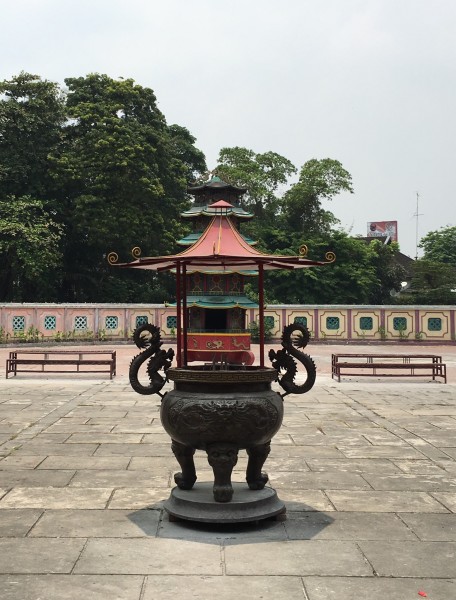 Since it it was getting past lunchtime, we decided to stop somewhere and eat. Murad said he knew a great place on the way. It was a really good restaurant with a large variety of dishes and great seating areas. The main entrance was decorated with this traditional board. Those figurines are marionettes, which are used widely through Indonesia in theatres and shows. 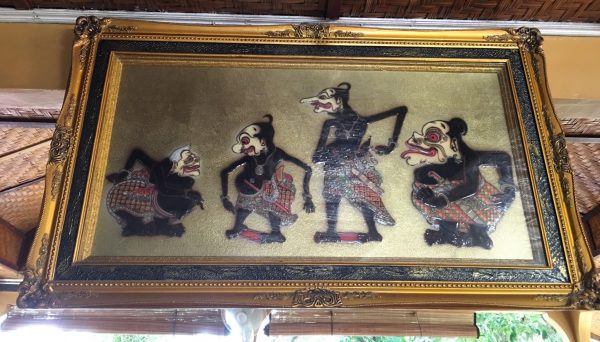 The restaurant had seating areas inside and outside. Lush plants, a small creek, and lots of birds contributed to this nice experience. 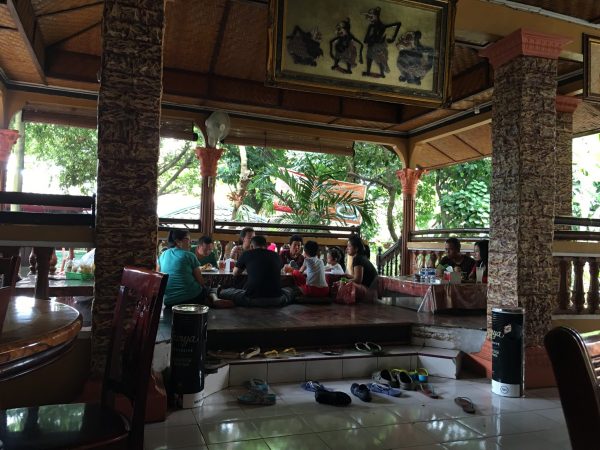 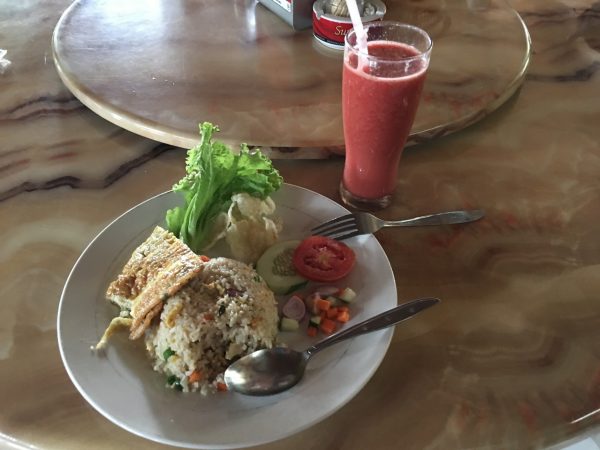 Since we we did not have any success at the first Hindu temple, my guide decided to try again. We took a little detour and found another temple. That one was really pretty. And – the main thing – it was open.

I suppose it was a Shiva temple since there was a large Lingam in the middle of the main hall, but I could be wrong. 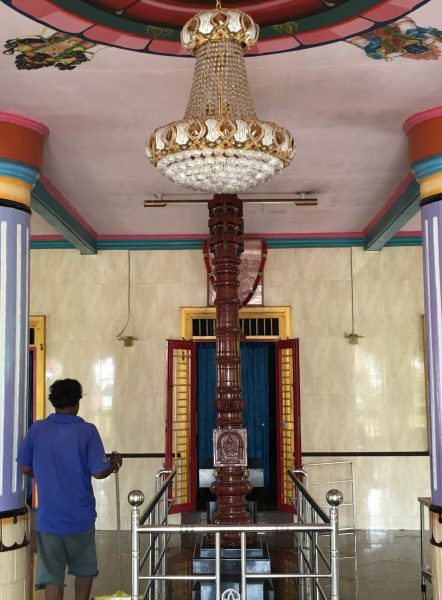 Really pretty mosaic on the floor. 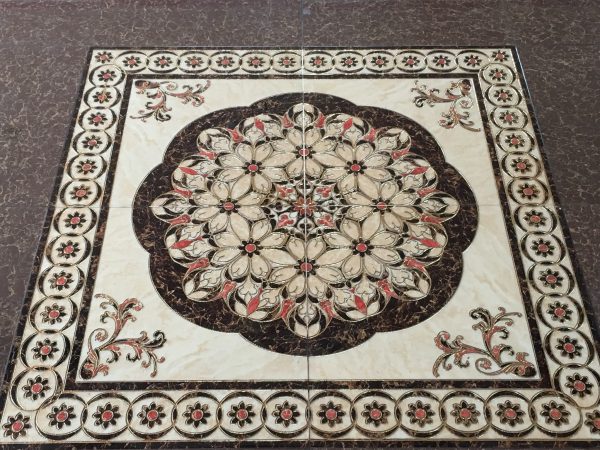 A few guys in the corner were making garlands from fresh flowers for the afternoon pooja. 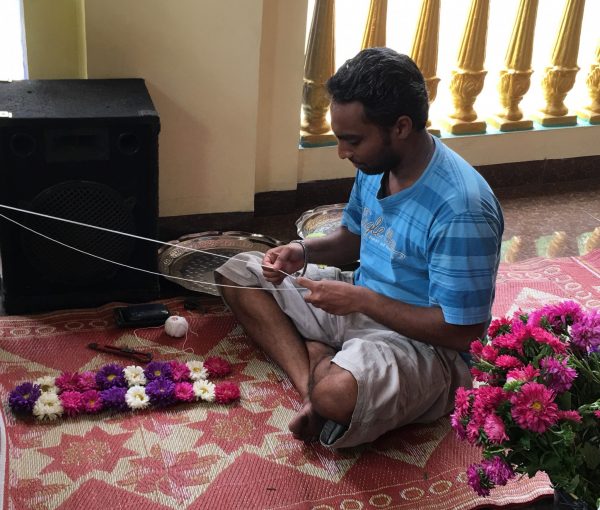 Side gates were decorated with small brass elephants. 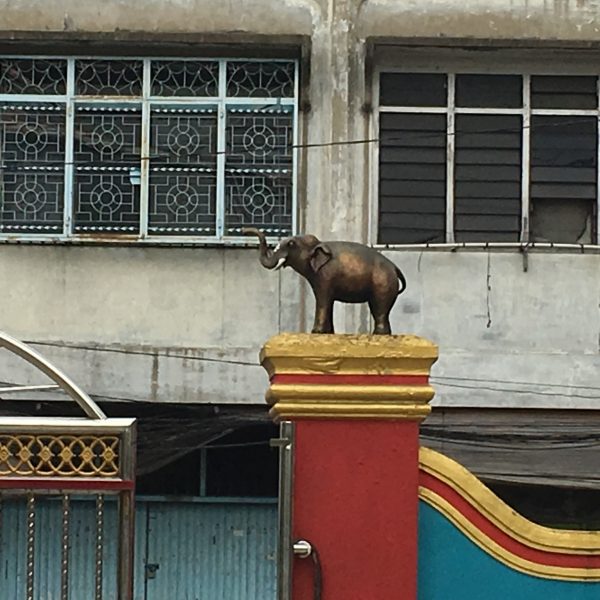 But the main surprise still awaited me. It was a real Indian temple in miniature form. The huge Shiva statue could be seen from the main road. I was jumping in my seat when Murad showed it to me. Of course, we had to get out of the car and come closer. The gates were closed, but we walked around. On the other side of the property we saw another gate. While I was trying to stick camera through the bars, my guide opened the door and called out.

Not long after, an old Indian man walked to greet us. He migrated from Tamil Nadu to Indonesia a long-long time ago. A few years back he decided to build a small temple, which reminded him of his country. Luckily, he had a large plot of land and money.

The temple is not finished yet. There were a few guys on the roof applying final touches to the gods and goddesses (right corner). I was concerned about men working at height without any safety harnesses (I guess, my safety auditor mentality kicked in). But they were not concerned in the slightest.

The quality of work was really high. The owner told us that he hired an architect from his home town, and also some sculptures were made there. 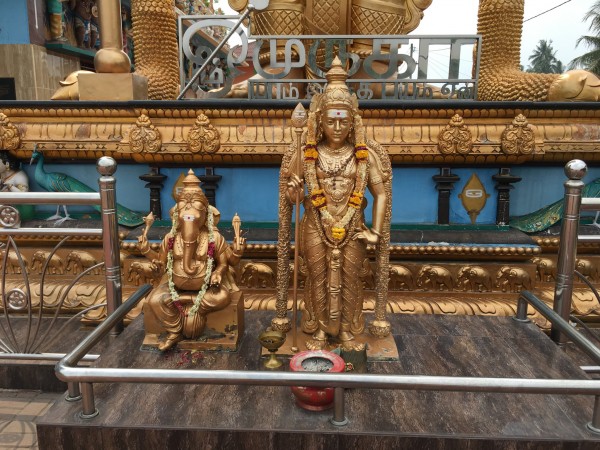 I wish I had eight arms like this goddess. Have a look how she holds a man by his hair. Nice one!

On certain days they have religious gatherings there. My guide was very pleased with this information as he decided to bring his tourist here in the future.

I guess, he owes me because otherwise Murad would never come close to this place and missed this opportunity to entertain his guests. 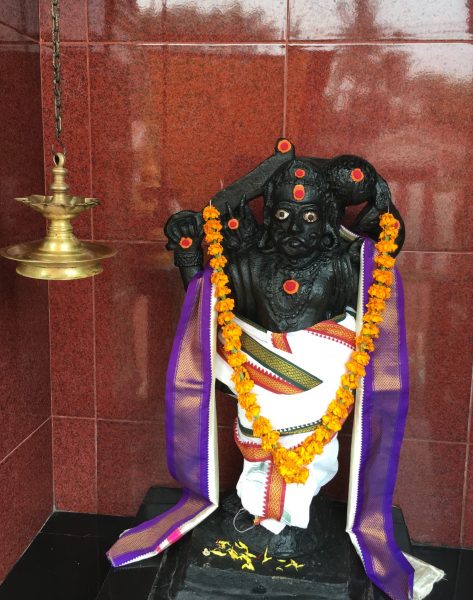 Ganesha was also there. All the most significant gods and goddesses were in one place.

There was a well in front of the temple. It is probably a significant feature, I don’t know. But I liked the arch above the well. 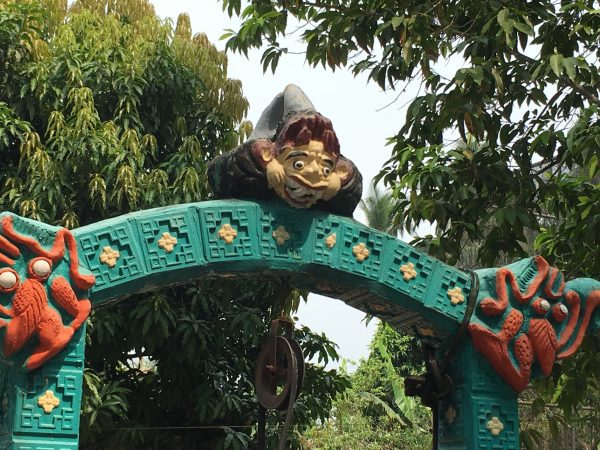 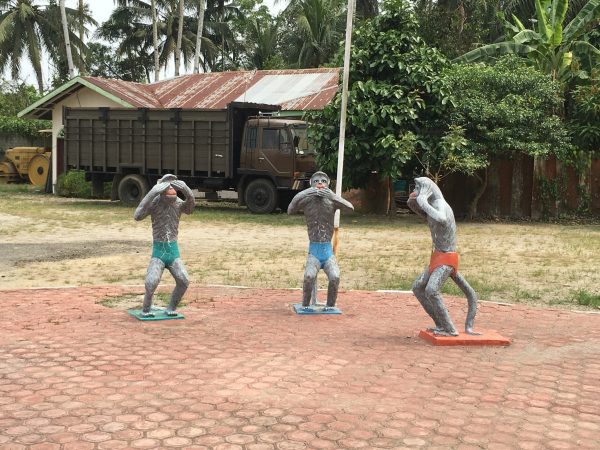 It was a very interesting experience. We attended more Indian temples than any other touristy places. I wonder why.

This is an auto rickshaw Indonesian style. They are based on a motorcycle and a small carriage with seats attached on the left. It’s a bit different to Indian auto rickshaws, where the driver sits in the middle and the passengers right behind him. 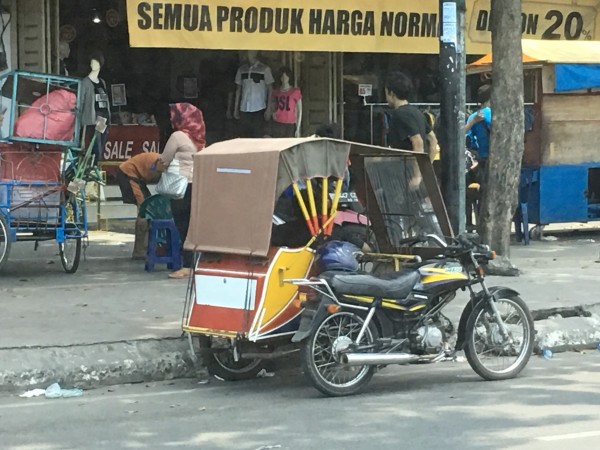 This lovely old lady agreed to pose for my photo. We did not speak the same language, but with some hand signs and smiles, I convinced her to participate in my photo session. When I finished, she came closer to me, pulled my scarf down and covered my chest. So on top of excellent photos, I got a lesson in modesty. From that moment I was constantly checking my “stroller” (light scarf in India) to make sure that I don’t provide any opportunity  to the very easily tempted men.