On our second day we were planning to go to the Rann of the Kutch, as per our itinerary below (original spelling and choice of words).

“After breakfast drive to Little Rann of Kutch with its notable mud architecture, a medley of craft traditions and excuisite apparel, this eminently colorful rich land has a wonderful handcrafted feel. Each community has its own oral traditions, dance, craft and dress”.

The agency forgot to mention that it would take us about 5 hours to get there and obviously as long to come back. But we did not know it yet. So, we were willing to smile when we saw that interesting road sign.

Time flies when you are having fun. Right? Right. I had some great company and we were talking non-stop. Every time we looked through the window we saw this landscape. For about 4.5 hours it was like this.

Once we had to stop to give way to a large herd of buffalo crossing the road. I absolutely loved a shepherd we saw; he looked very wise and down to earth.

Now an interesting tidbit. When we arrived to the turn toward the festival and silver sands, we saw a very extensive police cordon. They told us that there would be absolutely no way we could proceed any further, because apparently PM Modi was having a huge assembly with the highest echelon of police officials in the country. This particular police officer would definitely let such pretty ladies to go there, but he had a strict order not to. And on, and on and on. Maybe we would like to do a radio interview instead, since they had a few journalists there waiting for “high powers” to arrive?  We politely declined, because due to our mood the choice of words would be highly inappropriate.

Very angry, we decided to call India’s Ministry of Tourism to clarify that. And they firmly assured us that ALL travel agencies were notified about this big event in writing. That actually meant that our stupid agent decided to save money on the existing booking and therefore did not change the itinerary. Anyway, our driver Ramesh took pity on us and suggested to go to the highest point in Kutch, from where we could see the Arabian Sea. (He also mentioned that our itinerary is the most stupid one in his 4 years driving in this region). We totally agreed.

This was the first “dressed up” camel in the long line of photo opportunities with camels in Gujarat. Both the camel and the guy looked bored out of their mind.

It was such a blissful quiet place. If I could meditate, I probably would do so there. But to meditate I had to sit still for at least a few minutes and this is against my nature.
We spent a lot of time here, but in the back of our mind was always the thought of the long way back to Bhuj.

On the way back Ramesh also suggested to visit one of the tribal Muslim villages Sargu,  where men look after buffaloes, while women  make bedspreads, clothes and artwork. He did not think they would sing or dance for us just to compensate for the missed festival opportunity.
On arrival the first thing we saw were the buffaloes. Lots and lots of them. They were hot and bored. Ramesh went to negotiate our visit, while we stayed near the car under the suspicious stare of the “security guard”.

We were granted access to the village and had to walk through the cordon of buffaloes and dogs. Straight away we started to take photos like crazy.  One man was milking the buffalo. In Europe this job traditionally has been done by women. So obviously it was interesting. (Later I found out that buffalo milk contains 58% more calcium, 40% more protein, 100% more fat (?) and about 43% less cholesterol than cow’s milk. To make one kilo of paneer requires only one litre of buffalo milk or 2.2 litres of cow milk. The benefits are obvious. In Punjab people refuse to drink cow milk because it’s too watery.

Only a few men were in the village at this time, and they did not pay any attention to us at all.

However, the kids from the whole village flew to us like little birds. All at once they were chirping, hopping and showing us around. Women cautiously stood aside.

We wanted to look inside the mud houses so much. To our delight two women invited us to their huts. They were small. Very small. Considering that in one house 25 people slept in at night – just tiny. I still don’t understand how it was possible. Three beds were lifted during day time, so it would fit six people, maybe more if they were kids. But it still had to accommodate about 15 people on the floor. How do they have any private moments? Do they take turns for intimate encounters? But at least they had a fan. Not sure if it could provide enough cool air during stinky hot summer nights, but better than nothing…

Women and kids from this village don’t trust tourists much as there were a few cases when their photos were taken without permission and later appeared in calendars or brochures. But I was lucky to get a picture of a woman stitching a bedspread.

So much work involved, it’s amazing.  But the results are totally great.

Even the houses are decorated with tiny pieces of mirrors and bright glass or stones.

Always with the peacocks. We saw them everywhere- in the temples, palaces, forts and fences. 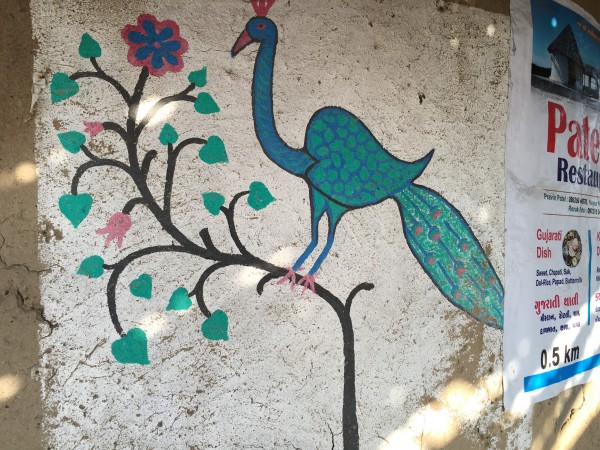 After we finished at the first village, Ramesh took us to another place. This small village was Loriya, where Hindus lived. They were also great craftsmen (or is it craftswomen?). Houses here were a normal rectangular shape. Streets were pretty narrow, just enough space for a small tractor.  People mainly ride bicycles, we didn’t see many cars around. 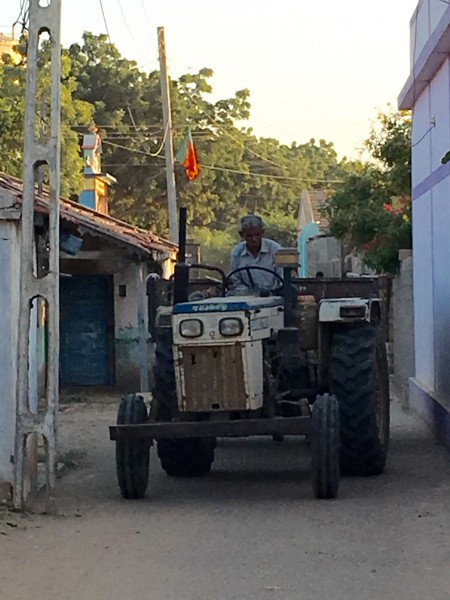 This is a house for 2 families. On the right side there is a typical Indian bed. 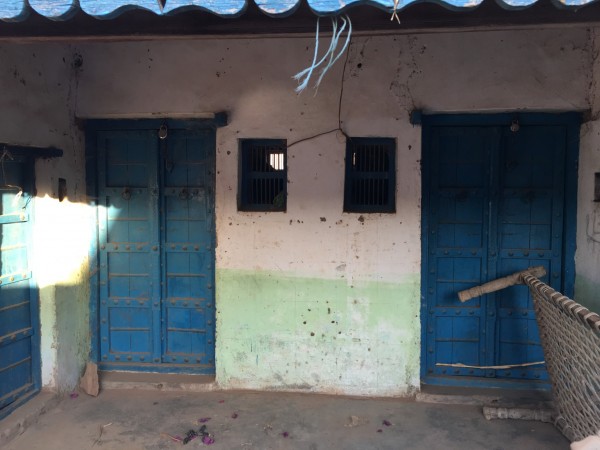 After a brief conversation with the locals, Ramesh told us that this old lady is 104 years old.  All her life she was creating beautiful dresses, laces and linen. She still works and teaches young girls the art of embroidery.

This boy decided to demonstrate a tablecloth by wrapping it around himself. I think it’s very beautiful. I wanted to buy a bed spread, but the size of beds in Australia is different.

By the time I decided to buy some embroidery, we already had a large crowd. All the neighbours and passers-by joined our group. This old guy was very eager to pose and take a photo with me. We were joking and laughing. Since I didn’t speak his dialect and he didn’t know a single word in English, our conversation could not go far, but a smile can break any barriers. Just look at us!

This place was great. Friendly  pure people, open hearts, happy smiles. This is enough for people from different countries and even continents live happily together, isn’t it? Why can’t we all live in peace?

It was getting late. We had a long drive ahead. So we said our goodbyes and left. I honestly was happy that we missed the Rann of Kutch, because we had a rare opportunity to meet great people in their home. At the festival we probably would be able to see singing, dancing and do lots of shopping. But it would be a touristy thing, where everything is for sale. On the contrary we were incredibly lucky to get a glimpse into the simple life of local people and take with us the tiny sparkles in their eyes and their sincere happy smiles.