During my first visit to India (goodness me, seems like it was ages ago), I asked my friend to take me to the cemetery. First of all, he was confused by a strange request from a Western visitor. Who in their right mind would want to visit such a place? Secondly, he said, in this town there weren’t any cemeteries, as Hindu and Sikh people cremate their dead. But this was exactly what I needed. He looked at me, assessed my mental state and reluctantly agreed. Then, of course, he could not know that I always visit churches, temples and cemeteries.

Anyway, we came to the place, which was fenced from the outside world with a tall brick wall. Inside it was surprisingly green and pretty. Tall mature trees, lots of flowers and birds singing. I would like to point out that the majority of Indian cities (unless it’s South Delhi, of course) are very bare, not much vegetation at all. Which explains why I didn’t see or hear birds  there. 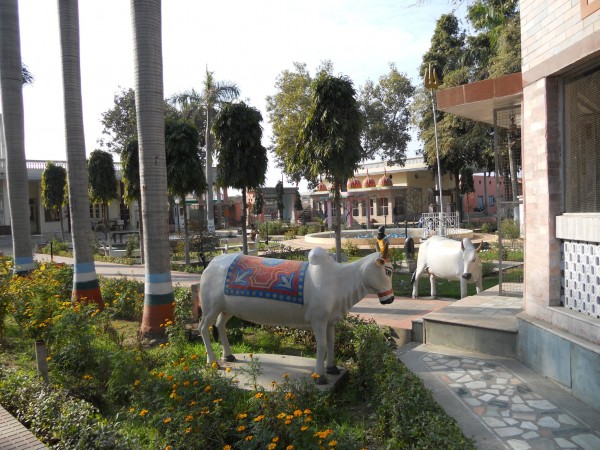 Cows in India are holy – surely, everybody knows that. They represent life, mother and the Earth. This is very serious. People have been killed upon suspicion of harming cows or eating beef. So, it’s probably no wonder that we could see cow statues all over the cremation grounds.  They have to oversee the departure of the deceased from this life to the next state of existence. 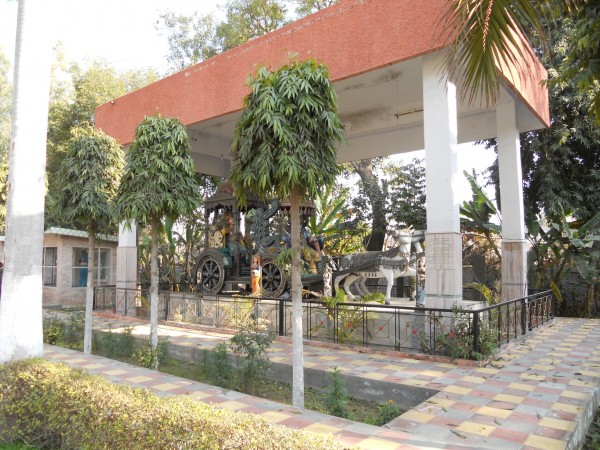 This beautiful chariot is supposed to deliver the “free” soul to the next recipient. In theory, if it reaches another human, then the soul moves upwards on the wheel of the rebirth; if it’s an animal or even a tree, then it goes downwards. Hindus strongly believe in reincarnation and that all forms of life contain souls. 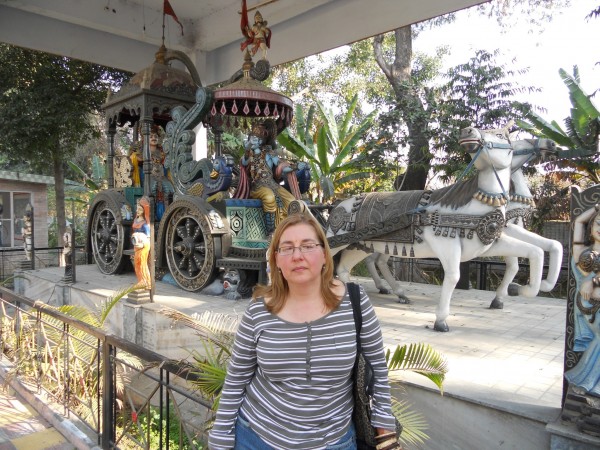 Walking along the clean and wide footpath in the furthest corner we saw a real cremation. It was quite a shock for my system. To see charred bones in the fire is a challenge for the Western mind. I have attended funerals before: in Ukraine, Australia and Vietnam. But it was all very different – coffin, prayers, ceremony and the actual burial. Everybody was saying nice words about the deceased and crying.

This part of the “cemetery” was quite a simple one, for poor people. Very primitive cremation spot. A bit closer to the chariot we saw more elaborate cremation pits with brick borders and partitions in between. 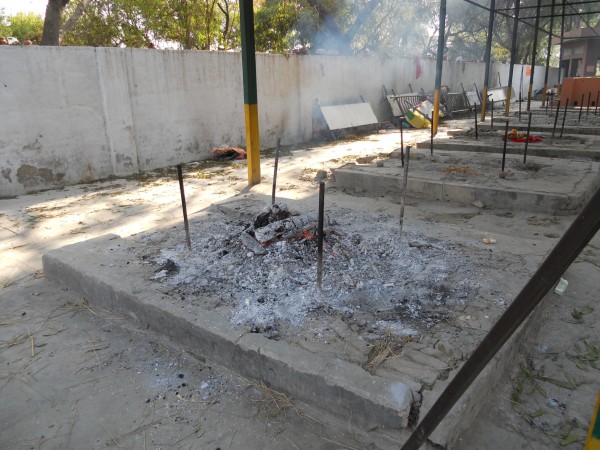 During my next Rajastan trip, we visited a small beautiful place Mount Abu. I escaped for a few hours and decided to go on a small expedition along the main street. Wandering around, I found a tiny Christian church. It was quite a surprise – a church right smack in the heart of India. Ignited by my curiosity I walked in and met a pastor. We had a long conversation, some tea and a cake. 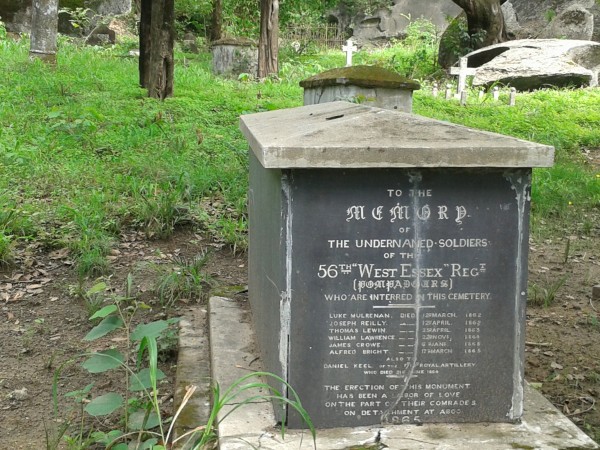 Later on Pastor Prem sent me a few pictures from the cemetery in Mount Abu. There were the graves and memorials of the military personnel as well as civilians. 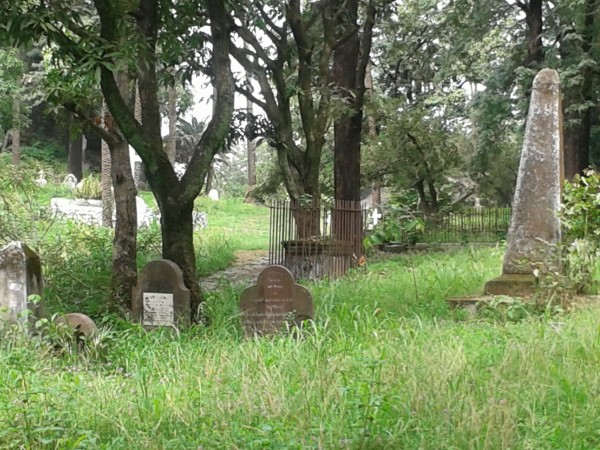 Looking from afar it could be anywhere in Europe – just an old tired cemetery. 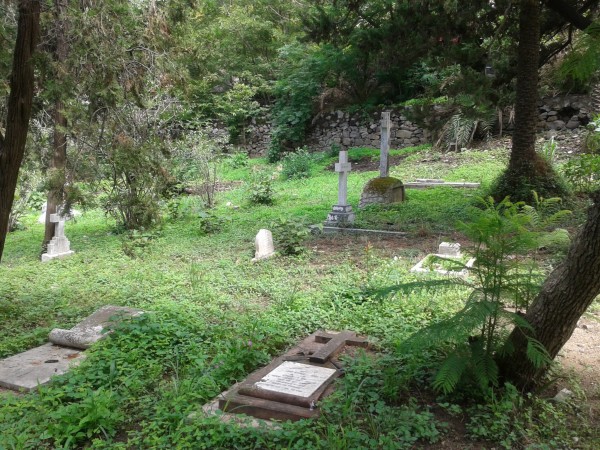 While in Rajastan, I found a few lines about Ahar in one of the tourist guides – a small town near Udaipur. This place is famous for being a cremation ground for the maharajahs of Mewar and a small archaeological museum. These beautiful structures are strategically placed over the actual cremation spot of the Royal family members. 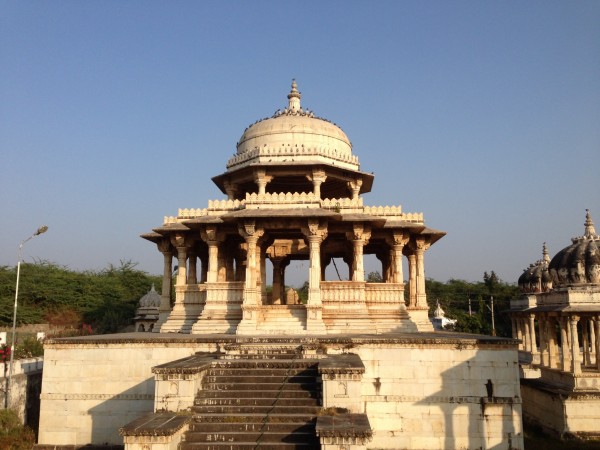 The guide said that there were 19 cenotaphs in honour of 19 maharajahs. Another source said that a few of these tombs are erected for the wives of the maharajahs, who chose to jump into the pyre during cremation. 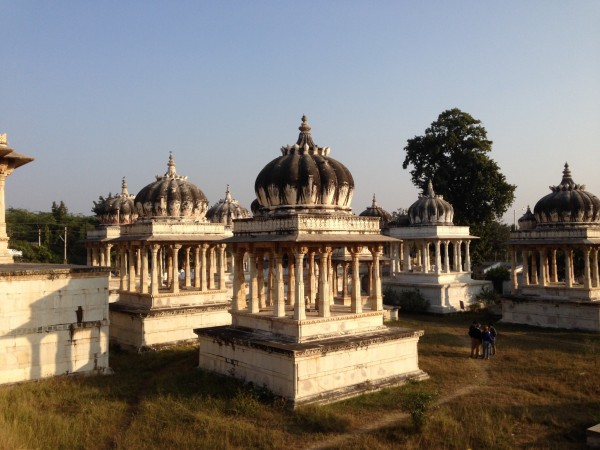 This particular monument was completed quite recently. People still come and honour the great rulers of Mewars. We saw a few locals, who were cleaning the grounds and taking rubbish outside of the memorial. This must be a very special place if they decided to clean it. 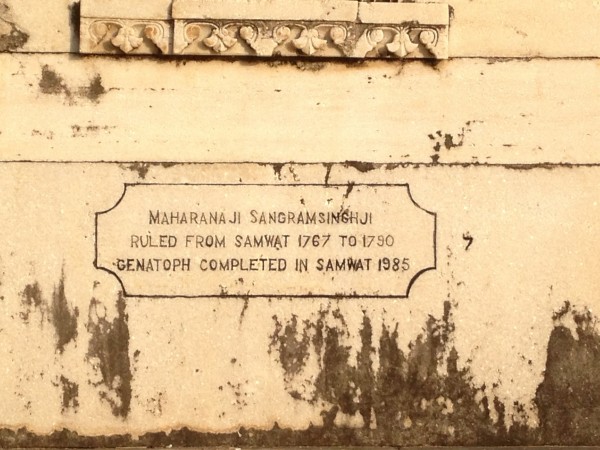 The next photo was taken at the sacred city Varanasi, the most famous city in India which history goes back 5000 years. The ultimate desire of any Hindu is to be cremated at Manikarnika ghat. Sometimes relatives carry the bodies for a couple of days just to reach Varanasi. Sometimes old and sick people somehow make it here by themselves and lie on the ground waiting for the last moment. 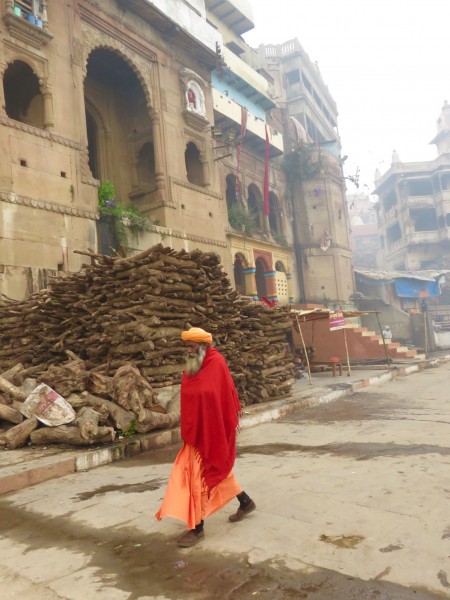 Wood, which is used for cremation is delivered from the special Rama forest, about 3 days away by boat. This is the most expensive hardwood. Only wealthy people can afford that.

The guy in the middle of the photo below is a priest, whose parents and grandparents were in the same business for generations. His job is to look after the immortal fire, which has been burning for 3000 years without stopping. Apparently there are a few family members who take shifts to look after this fire. When the pyre and a body are ready, he has to light up a small bunch of dry grass and start the actual cremation process. This is the exact moment on the photo below. 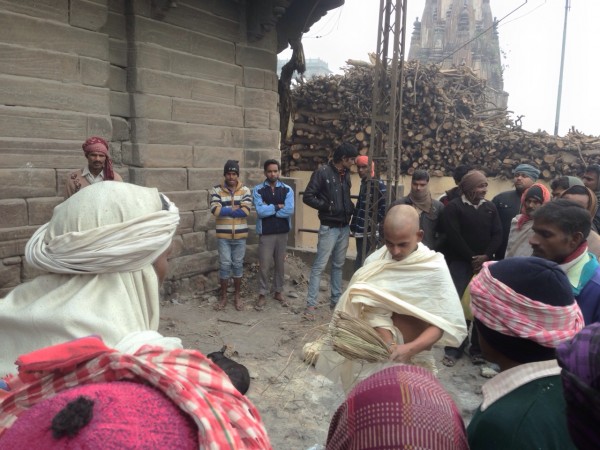 I was extremely lucky to be allowed so close to the fire. It is strictly prohibited for women to be in this place. (By looking closely in the photos, you can see only men). The idea behind is that women start crying and wailing during cremation, and this sorrow disrupts the peaceful process of the soul departing the body. If this happens, then the soul can’t reach heaven, which is the ultimate goal.  For people who believe in reincarnation it means that by getting to heaven their soul will never be available again to enter animals or trees, therefore they escape the circle of life forever.

Since I was not a relative but the honorary Western guest, I was allowed to witness this process and even take a few photos. 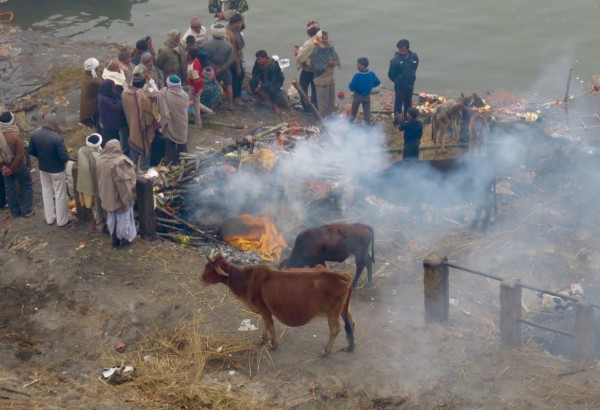 In this photo the cremation is almost over. In general, about two hours is enough to burn a middle-size body. If there are bits and pieces, which did not burn to ashes, they are swept into the Ganges to make a fresh spot for the next body. Holy men and young kids are not cremated as their souls don’t need purification. They are usually just buried. 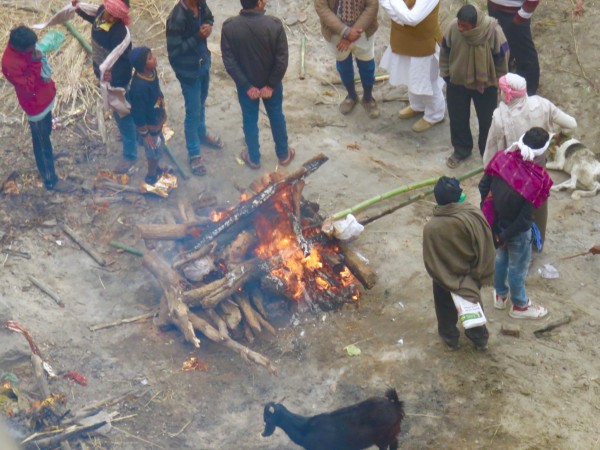 Bodies are prepared in a certain way by cleaning and shaving them, clipping nails and wrapping them tightly in white fabric. A group of young men carry the bamboo “stretcher” with a body attached to it straight to the Ganges. There they will briefly dip the deceased into the holy waters of the Ganges and bring it to the fire. The wealthier the person was in life, the higher the position on the ghats their body takes. 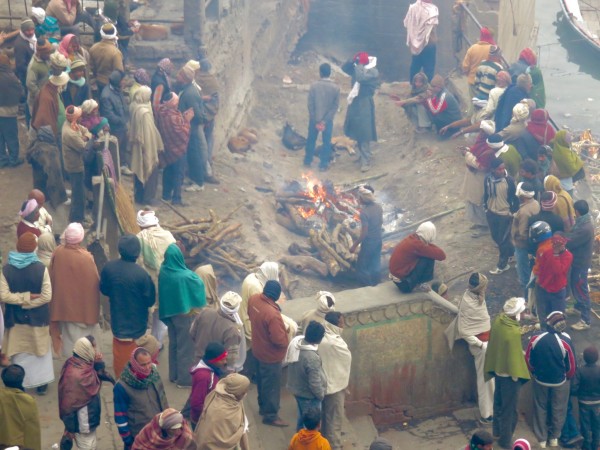 And later  goats and cows eat the flowers to finish the whole event. This is the circle of life. Sad, but true.

Absolutely amazing, but just a few metres downstream there were people bathing in the river. Just next to the cremation ghats.

Since not everybody can afford expensive wood, there are some cases when relatives just push the deceased straight into the water. And recently the government had to admit that there is a big problem with floating and decomposing bodies near Varanasi. The ecology of the river is highly compromised as well as the health of the people who rely on water from the river. The Ganges is the most polluted river in India. 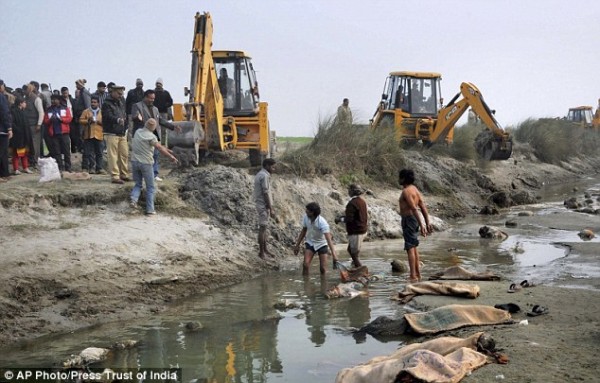 I was surprised to find out that not only people are cremated. In October 2007 in Bhopal a three year old tiger was cremated, who died in Van Vihar national park. Apparently the poor tiger died from fever. 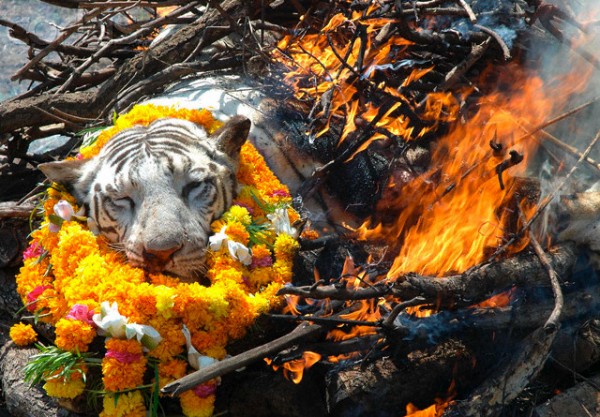 On the way to Tso Moriri lake in Ladakh, we passed this small military cemetery. This region has always been known for violent terrorist attacks on the Indian Army. Indian soldiers, who lost their lives in those battles, were buried here. 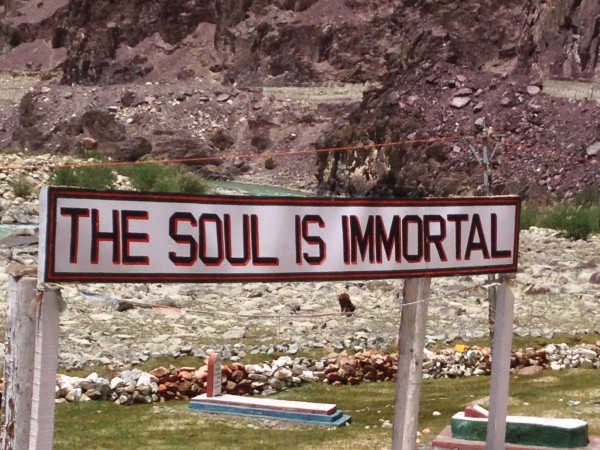 Because of their bravery and the permanent military control, this area was open for tourism again a few years ago. 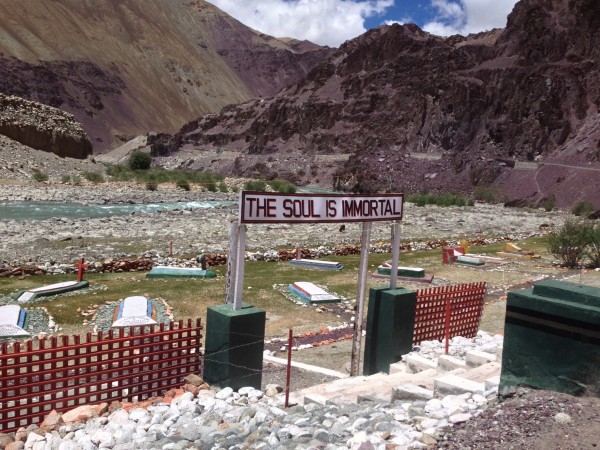 Those small huts with flags represent states from which soldiers came to the Army. 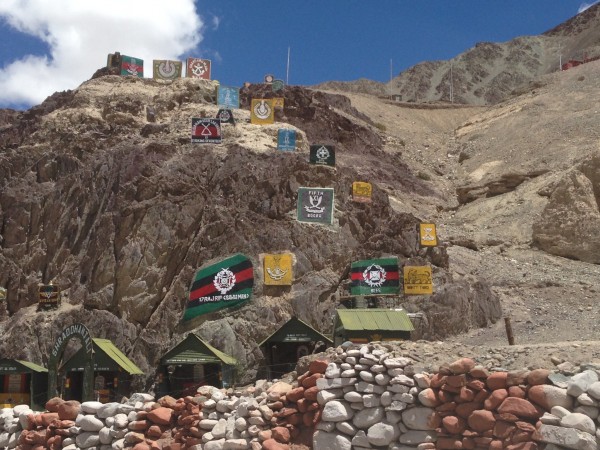 This is a totally different part of India. This cemetery is near Dharamshala in Himachal Pradesh. 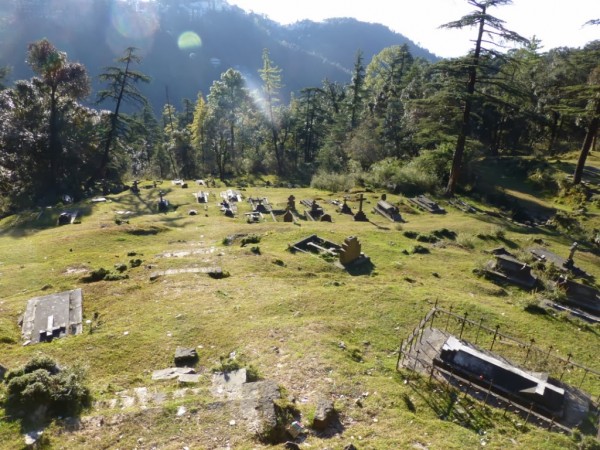 Near this typical Christian graveyard there is a small Anglican church dedicated to John the Baptist. It’s not easy to see it from the road as both are off the beaten track. 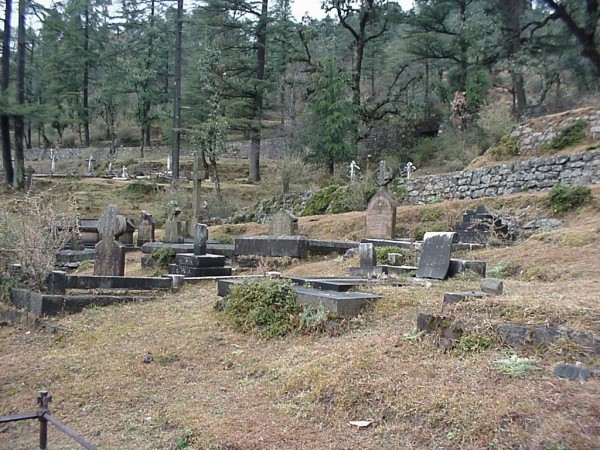 Totally different type of burial. This is a Tower of Silence in Mumbai, not far from the centre of the city. A small part of the Indian population belongs to Zoroastrian community. In their religion, death is seen as a destroyer of the purity of life. They can’t burn their dead, as the smoke will pollute the air. They can’t bury them as the decomposed body will pollute the soil. So they found another way to dispose of their dead. 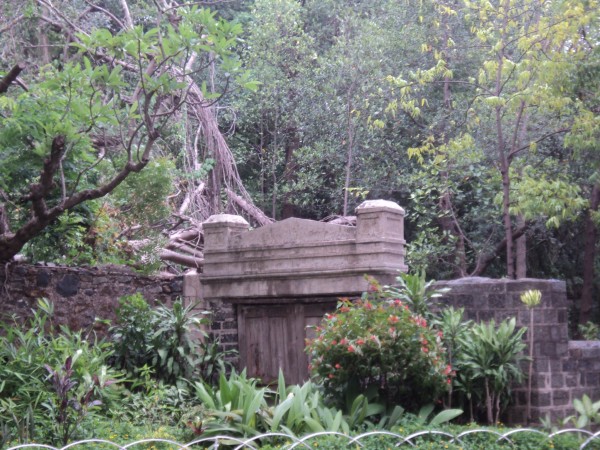 The picture below is a schematic diagram of a typical tower. There are three distinguished circles on the top platform. Bodies of the deceased are arranged in a certain order: men in the outside circle, followed by women in the middle and children at the bottom. Four small underground wells on the outside are lined with sand and charcoal. 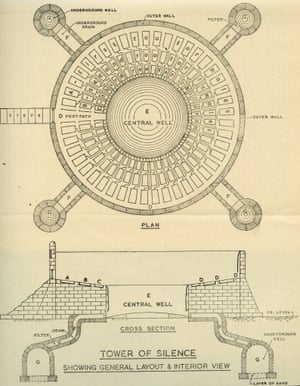 To dispose of the bodies Parsi “engage” natural forces – vultures. People bring the dead up to the top of the tower, strip them of clothing, (which is later disposed) and leave in silence. The vultures sit outside, waiting to be left alone with the bodies. In an hour the bones are basically stripped of any flesh. The next day the caretakers come and push the remains down the main well, where in a few days under the sun and elements those bones will be fully dry. 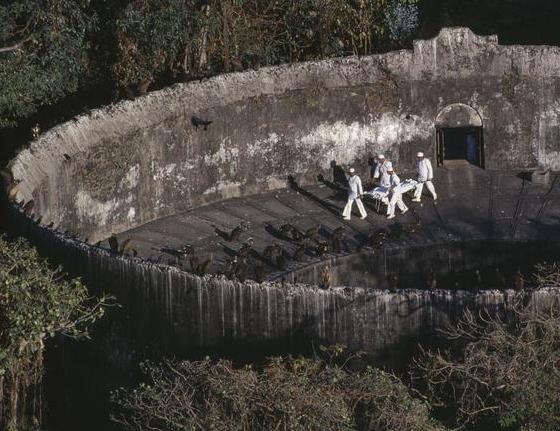 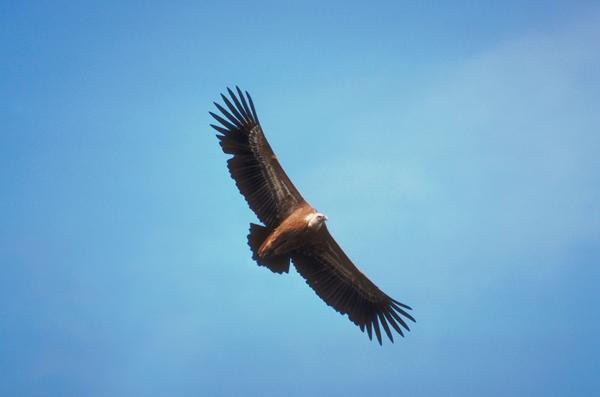 There is a real concern in Mumbai that diminishing population of vultures can jeopardise the traditional burial for Parsi people. About 20 years ago the Indian farmers started using a new drug for cattle, which was lethal for the vultures. Many birds died and their population is still very small. Recognising the problem the government looked into building new decomposing structures, activated by solar power. But they are not very popular with Parsi people and depend on sunny weather as well.

I read that the Tibetans use the same way of dealing with corpses, but they dismember them first to make it easier for vultures to strip off the flesh. Tibetans carry bodies to the top of the hills and leave them on the rocky plateaus. Vultures, sun and rain do their job perfectly well.

I have never been to this place myself, but my friend found a Parsi guide, who arranged a visit for him to the Tower of Silence in Mumbai. Next time when I am in Mumbai or Kolkata I will try to go there myself. 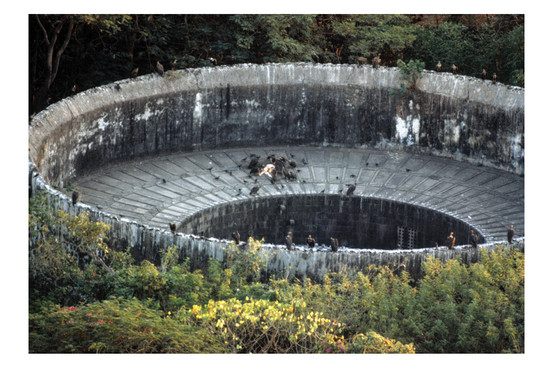 And finally – one of the most beautiful monuments and one of Seven Wonders of the World. The famous Taj Mahal.  I guess everybody knows that this is the mausoleum for the beloved wife of the Mughal emperor Shah Jahan. It was built as a resting place to house the tomb of Mumtaz Mahal. 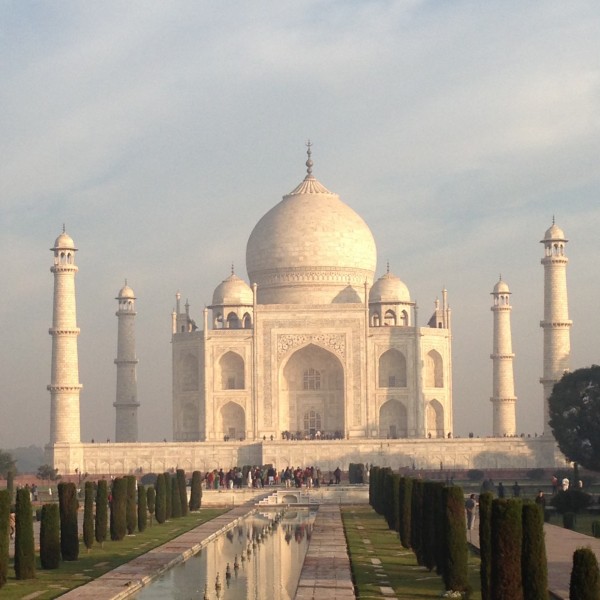 Love, life and death are always together! 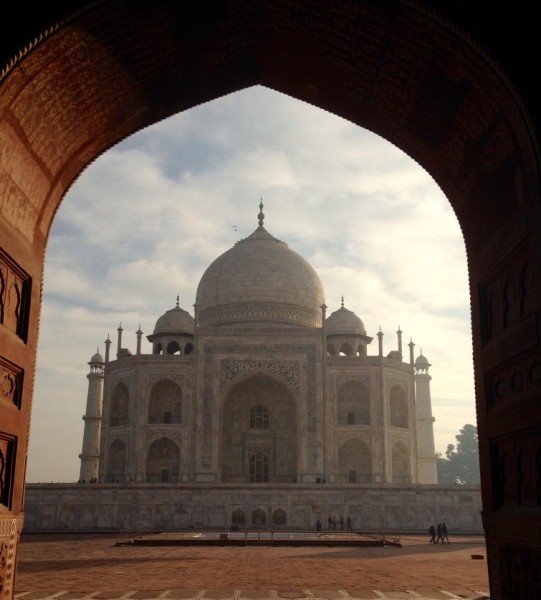