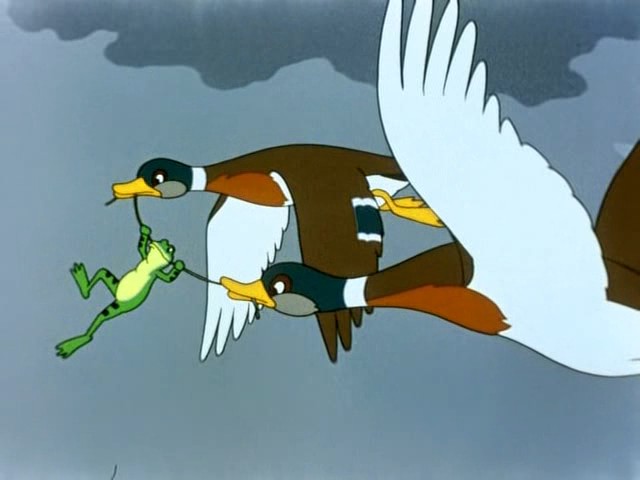 So, this clever frog tricked a flock of migrating ducks into taking her with them.  After some hesitation, the ducks agreed to this highly unusual proposition. The only condition was that they could not quack under any circumstances. All of the other frogs were having a great time making fun of the adventurous friend. However, despite all the odds the ducks and the the frog took off. It all was going well and they made it quite far. Suddenly, a group of people below saw this highly amusing group of travelers. With great support and admiration, they yelled from the ground “Clever ducks! Well done!”. (Those people probably thought that the frog was a potential feast for the ducks). The silly little frog could not tolerate that she was not recognised as the mastermind behind the idea, so she decided to rectify the issue. “This was my idea!” she screamed at the top of her lungs.  Big mistake! She shot down like a missile. Luckily, she fell into a pond. Soon after, she was bragging and entertaining the local wild local life with her amusing stories. Happy ending!

Even then, when I was a little girl, I could see myself as this little frog. So, when I opened my mouth above India and plopped straight in the middle of Punjab, it was a retell of this story about The Traveler Frog. I wonder whether if I could kept my mouth shut a bit longer, maybe I would land in the North Pole?

Anyway, that was just a preface. There is a connection with the next story. Trust me.