I have wanted to visit the caves in NZ for a while now. Last year I concentrated on geysers and volcanic sites at Rotorua and didn’t have time for anything else. So I decided to visit the caves this time no matter what. A package that included the Ruakuri and Waitomo caves was what suited me the most.

As per Maori legend, this cave was discovered by pure chance. About 500 years ago, a young boy was attacked by wild dogs while walking nearby. The adults from his community decided to find the dogs and kill them. While chasing the dogs, the hunters found the entrance to the cave. Since then the cave was given the name Ruakuri Cave (‘rua’ meaning den, and ‘kuri’ meaning dog).

The man-made entrance is nothing special, but the spiral entrance towards the bottom of the cave is absolutely spectacular.

The land in this area belongs to the Holden family. According to British law, everything above (up to the sky) and below the ground (to the centre of the Earth) belongs to the owners of the land. For hundreds of years, Ruakuri Cave was opened and operated by the Holdens. The NZ government wanted a good share of the profit, but after a long court battle, lost the case. During these proceedings the cave was closed, but was refurbished and opened for visitors in 2000. It is a joint venture of the Holden Family Trust and the NZ Tourism Board. 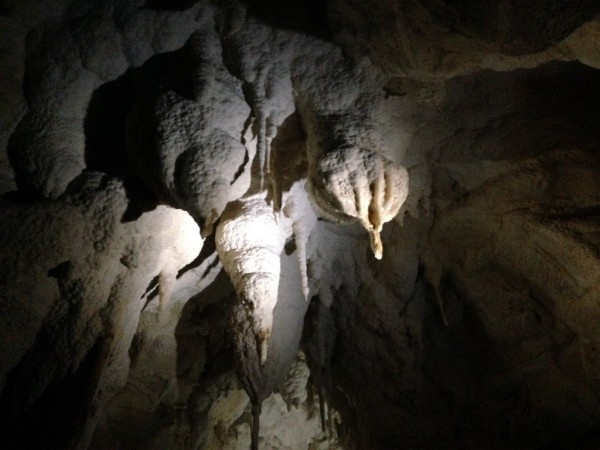 Lots of work was done to the underground construction on the walkways, bridges and a new spiral entrance way. 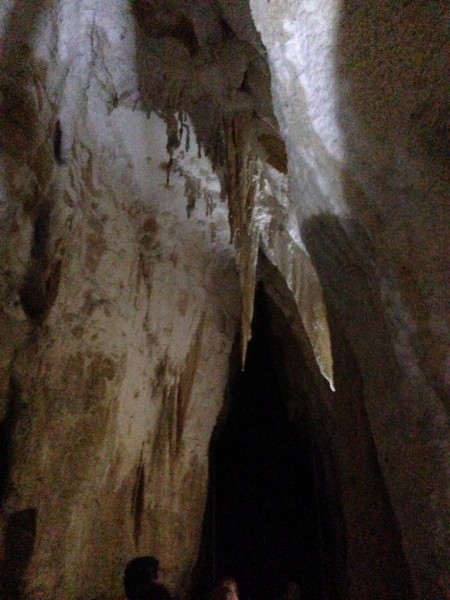 The new sound warning system was installed along the walkways to prevent accidental or deliberate damage to the formations. And this sound is VERY loud.  There is a $10000 fine that can be imposed on the offenders.

The cave is very large and the tour took us about 2 hours. It was spectacular and we saw small colonies of glow worms on the walls and roof of the caves. 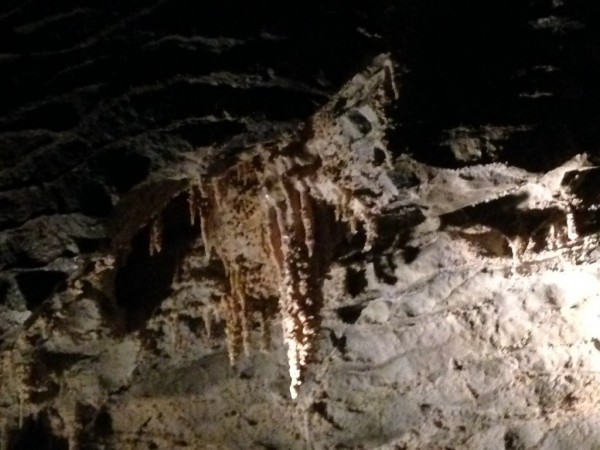 In one spot on the roof the guide pointed out to us the clam fossils, which proved the theory about the seabed raising to the that level. The section of fossils was quite large and complete. I found the size of this scallop to be quite impressive. Just imagine, I could eat one scallop and it would be enough for the day… 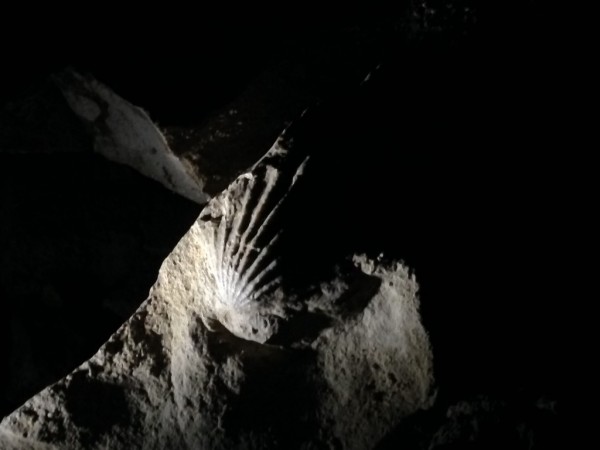 My photos are a bit fuzzy, because the light in the cave was minimal. I am really surprised that I could take any pictures at all.  This photo below reminds me of stone icicles. 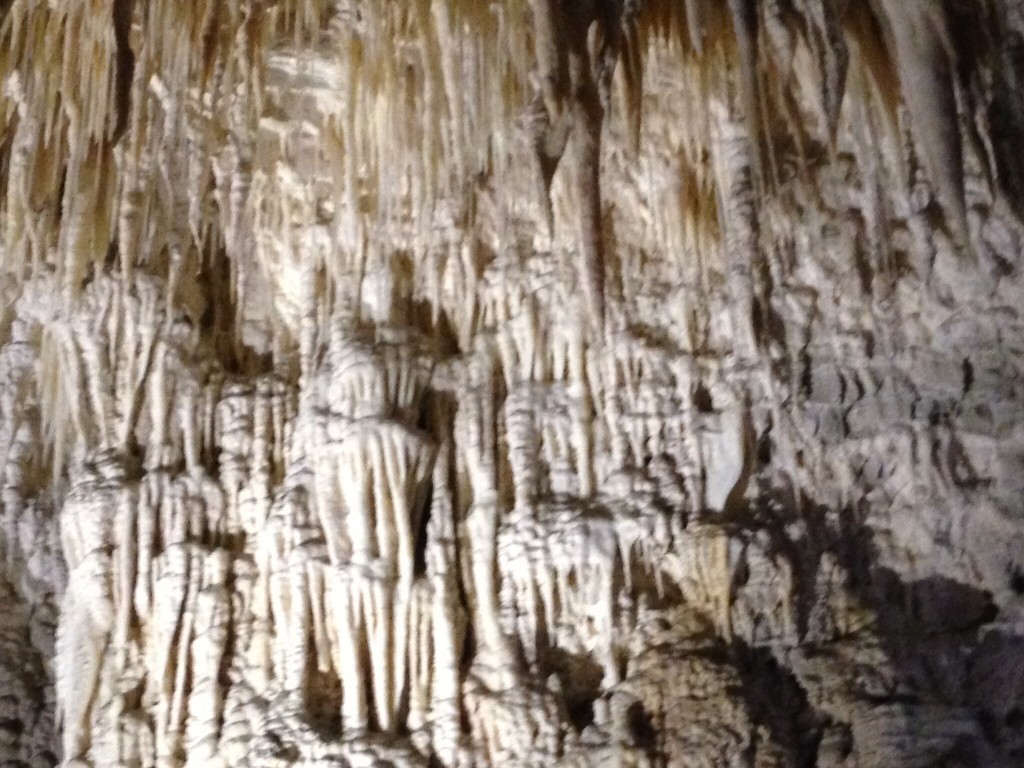 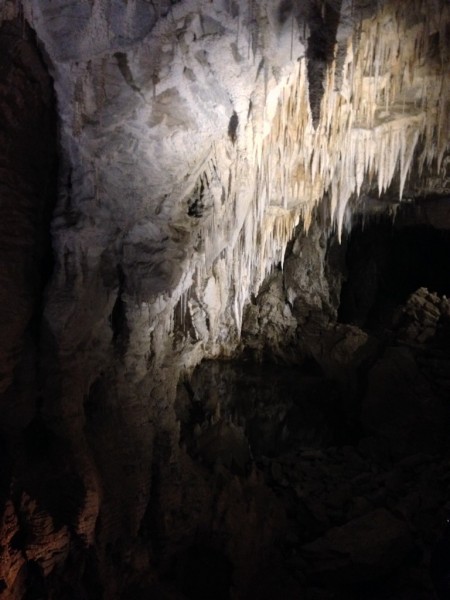 I felt like I was swallowed by a shark –  it was very dark inside and there were lots of very sharp and pointy teeth. If we add the sound of the underground river, the “near death experience” was complete. 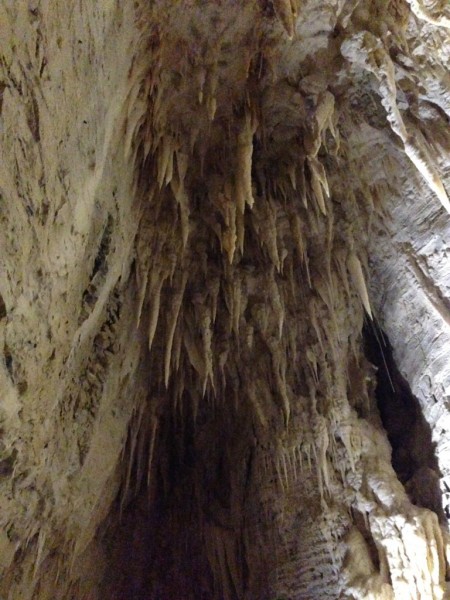 There are some adventure tours in this cave. Water rafting, abseiling in the dark (?) and walking tours could also be done. All of them are quite expensive. Considering that I was there during summer, the water level was quite low. So it would not be much of a water rafting experience anyway.

When the prehistoric “shark” regurgitated me to the surface of the Earth two hours later, I went for my second tour to see the glow worms. 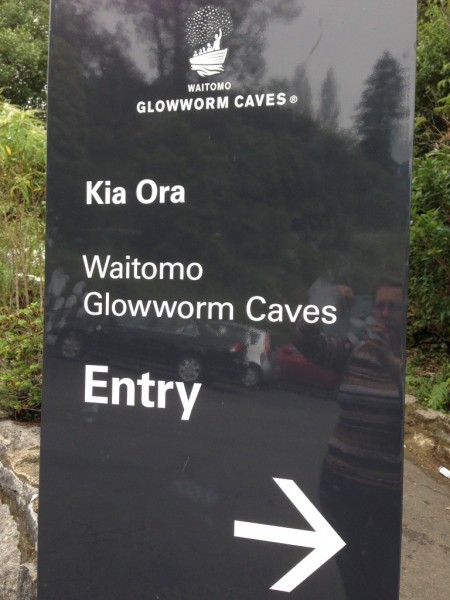 The Maori people have known about these caves for a very long time. In fact, the Waitomo name means exactly that: wai -water, tomo- hole. Easy.

An English surveyor and a few Maori people did a lot of exploration in this area. They followed the stream of water and found one of the entries to the cave. They then ventured inside the cave and found the glow worm grotto. Needless to say, everyone was completely struck by the beauty of the cave. Following the stream further, they admired the limestone formations, which came in all shapes and sizes. It would be totally unfair to keep such beauty from other people. The Englishman approached the Maori Chief about the cave and together they decided to organise tours for a small fee. Of course, later governments tried to take over this natural attraction. A new hotel was built to encourage more visitors. (I was planning to stay overnight in this hotel, but it was booked out).

In 1989, the land and cave were returned to the Maori people. Many descendants of  that tribe work around the area as guides now. 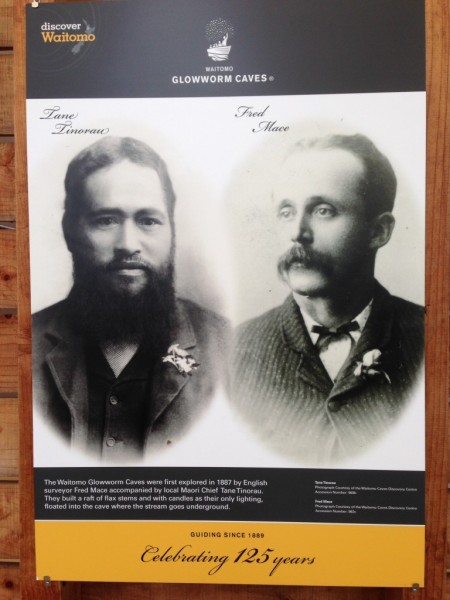 This sign containing these old photos was on display just before the entrance to the caves.

The visitors on the photos were lucky as they were allowed to take lanterns. For some absolutely unknown and unexplainable reason we were prohibited from using any lights, including flash lights on our phones or flash. Photography and video were totally banned. Apparently, it could disturb the glowworms. But we were  not allowed to take photos even far away from their colonies. 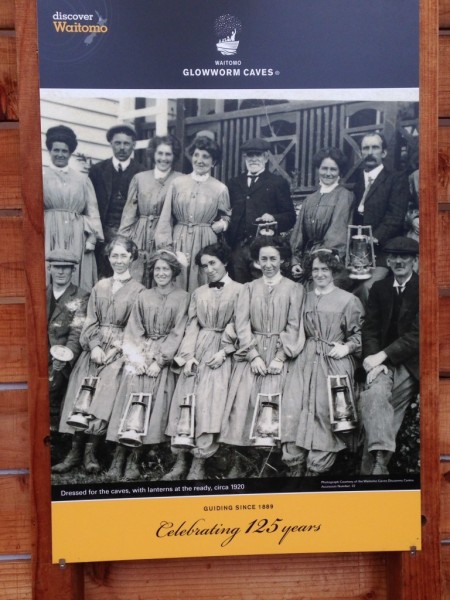 Despite all the restrictions,  I still took a few photos. Not like they are spectacular ones, but at least some memories. 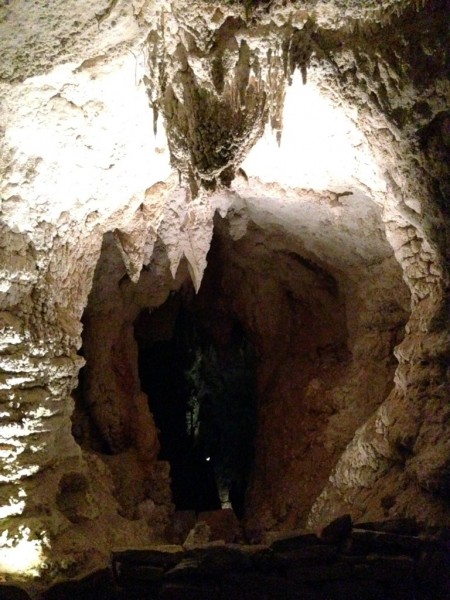 It was very dark and mysterious inside. And also very quiet. Our guide asked us to stay still for a while, so we could feel the silence. And after that he sang a Maori love song. It was very very good. The acoustics in the cave were amazing. 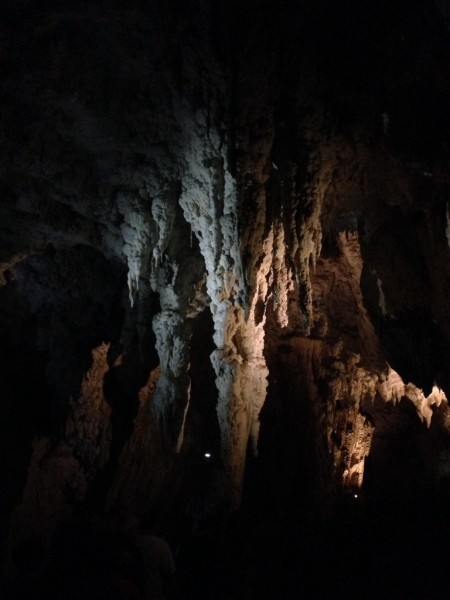 The tour took about 45 minutes. For about 15 minutes of it we waited for a guide for the previous group to clear the platform. The cave itself is pretty, but not overly pretty.

Considering that there were about 40 people, we had to wait for a second boat because not everyone could not fit into the first one. When everybody sat down, we slowly moved into the grotto. That was SUPER spectacular. Millions of glow worms were hanging on the walls and roof just above our heads. A totally surreal experience. It looked like a starry sky on a clear cold night. Beautiful! But it lasted about 5 minutes only. Our guide very quickly pulled our boat out and off we went. (The guide was standing and pulling the boat along ropes, stretched around the grotto). 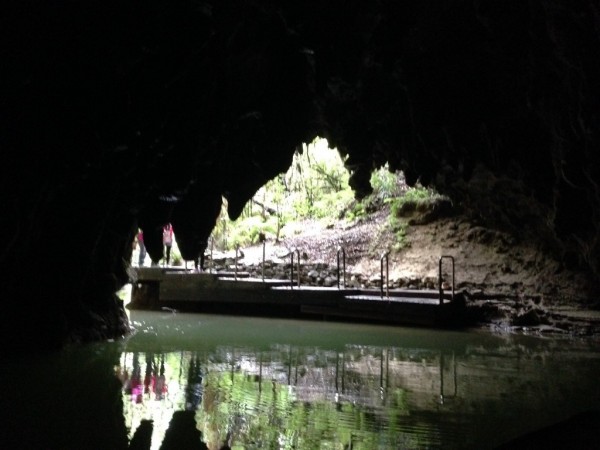 The exit was very pretty. We had to walk through the forest for about 10 minutes. It took me more like half an hour, because I was stopping, listening and taking photos. 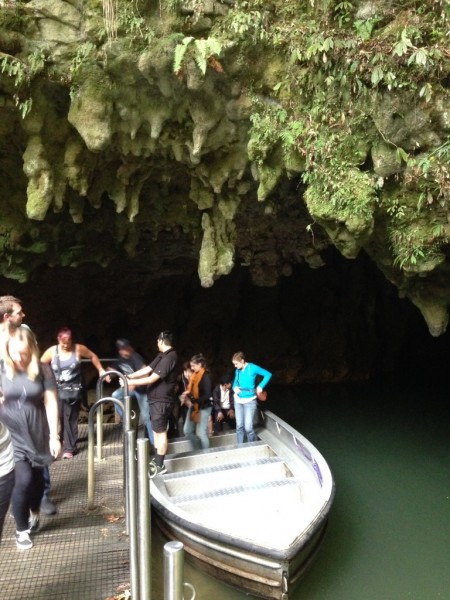 The warning below is a good deterrent for pesky visitors. I, as a law-obedient citizen, did not trespass. Or maybe it was because I was scared of the consequences. 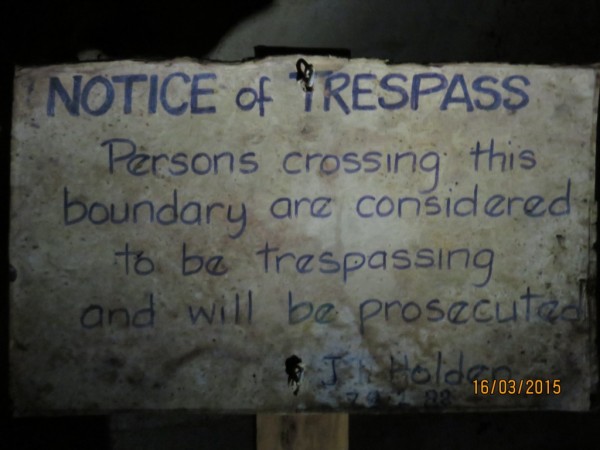 The most renowned animals in the cave (apart from the very few other insects) are the glow worms Arachnocampa luminosa. They are very interesting creatures. They start their life as an egg, develop into a larva and later become a fly. Although they spend the majority of their lives as larva. At this stage they are just eating machines. Their bodies consist of a large mouth and stomach, with no natural outlet for waste, which we lovingly call a butt. I assume that they suffer from constipation non stop, but it only adds to the intensity of the glow. They don’t excrete anything, as all their food is converted into energy. The larva stage takes between 6-12 months depending on food supply.

The larva spins a nest out of silk from the roof of the cave and then hangs down as many as 70 threads of silk.  They vary in length from around 30-40cm long and they are very sticky. Interestingly enough, a hungry larva glows brighter than one which has just eaten.  Scientists believe that this light tricks mosquitoes, flies and moths to believe that they are outdoors.  As soon as the silly insects touch the thread they are gone. Larva would not spit on a snail or millipede if they were lucky enough to catch one. The most disgusting thing is that the first hatched baby worm will eat the eggs around it, which could have become its brothers and sisters. But hungry means hungry.

According to the Wikipedia entry on Arachnocampa luminosa, the larvae are sensitive to light and disturbance and will retreat into their nests and stop glowing if they or their threads are touched. 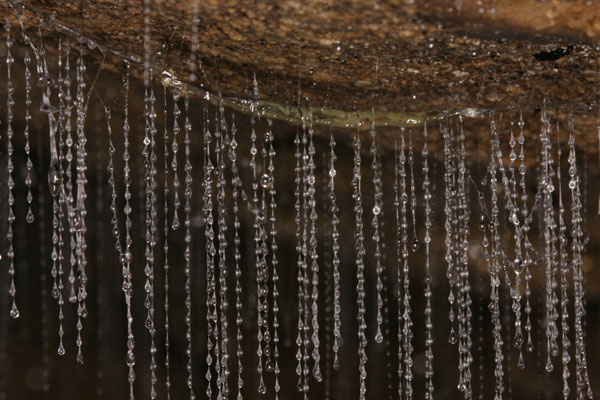 At the end of the larva stage it becomes a pupa. The pupa stage lasts about 1 or 2 weeks and it glows intermittently. The glow worms at the mature stage do not feed, and live for only a few days. When the adult males and females get together, they become sexual maniacs. Imagine, they are spared  only a few days to have sex, lay eggs and die happily together. The only purpose of the adult male is to mate, and for the female to lay eggs.  The female lays a total of about 200 eggs and dies soon after. It does not look like their existence has much purpose – eat, mate, lay eggs, die – but, my God, they shine very bright during their short life. 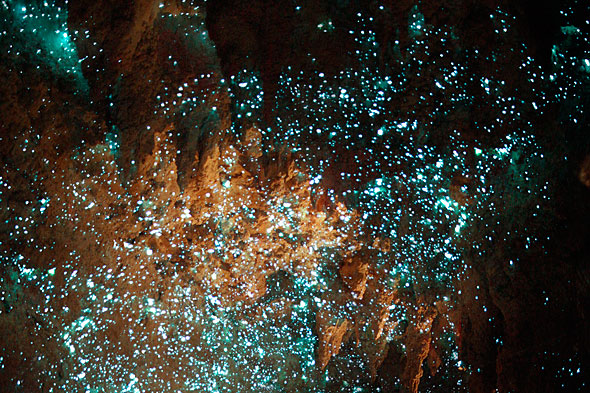 I don’t know if the German composer and conductor Paul Lincke had ever been to New Zealand, but the glow worms definitely made a great impression on him to create this music. Unfortunately (or maybe fortunately) for all of us I can’t play music. But if someone is skilled enough, here is your chance – this music sheet can be bought on eBay for about $3. To compensate for my inability to entertain you with my version of Idyl The Glow Worm, I found a proper orchestra for you on the net. Enjoy! 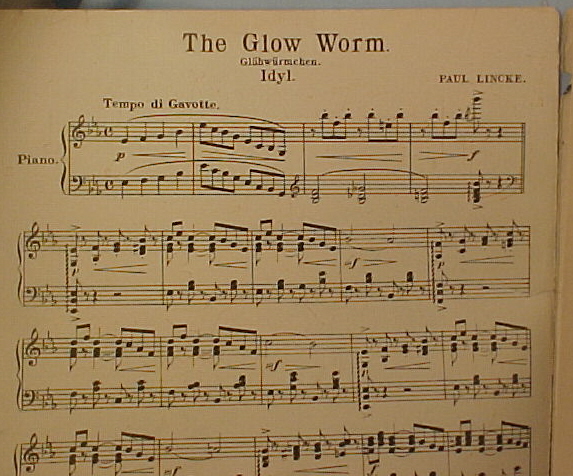 And just to polish off my story, here is my beloved Sir David Attenborough with an episode on glowworms from Life in the Undergrowth.

P.S. I would recommend visiting the Ruakuri cave, but not the Glow worm one. The time with the worms was very limited and while the show is spectacular, it’s quite time consuming and expensive. I also was concerned about safety while on the boat. We did not have any safety gear and it was pitch black. I have no idea what their rules are in case of any accident in that environment. What about small kids in case they fall overboard?