Last day in Auckland. Not enough time to go out of city. Too much time to spend doing nothing.

I checked Trip Advisor  and other search engines for something to do in Auckland. Finally I came to walking tours section which is at the very end in the alphabetical order.

The combination of all the above sealed the deal – I am going.

And I have to tell you that was the best decision I’ve made in NZ. It was very well organised. We all met in front of Shed 10 on Queen Wharf. There were 12 people from different countries: Australia, India, Germany, Canada, Austria, France and even NZ. Our guide for the day was Oskar, who has been traveling the world for the last 10 years and –  luckily for us – decided to visit NZ.

THE BEST GUIDE EVER! And I mean it. His knowledge about NZ history and ability to present this information in great form with a sense of humour, won every single one of us. We just loved him. I also wanted to mention Susan, who organised this company. It was such a good idea.

We started from the Wharf, and Oskar explained how the land was reclaimed and city expanded along the coastline. We looked at the old historical shed, which is now a heritage structure and recently built White Cloud centre, where major exhibitions and shows are taking place. After that, we moved up Queen St and stopped a few times along the way.

The area around Britomart was originally in the middle of the water, in what was then known as Commercial Bay, and on the eastern edge of the bay was a large headland known as Point Britomart. In the late 1870’s, the headland was reclaimed  to, among other things, allow for the rail network to reach into the growing city.

Oskar told us about “not so glamorous” past of this area, which included many brothels. Men hugely outnumbered women during that time. And with the constantly arriving sailors starved for love, the need  for “special services” was obvious. To commemorate the great efforts of local prostitutes in keeping male population sane it was decided to install these red LED lights along the walls. 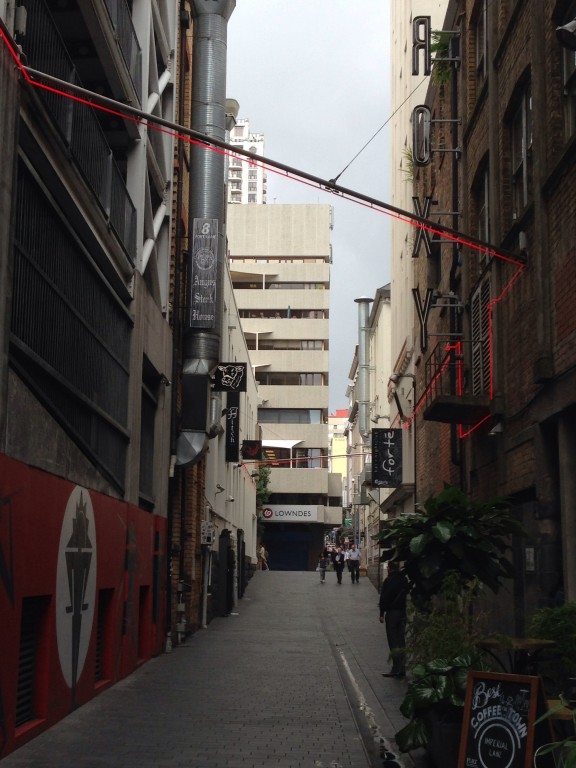 Some historical photos provide insight into land reclamation and construction of new buildings. 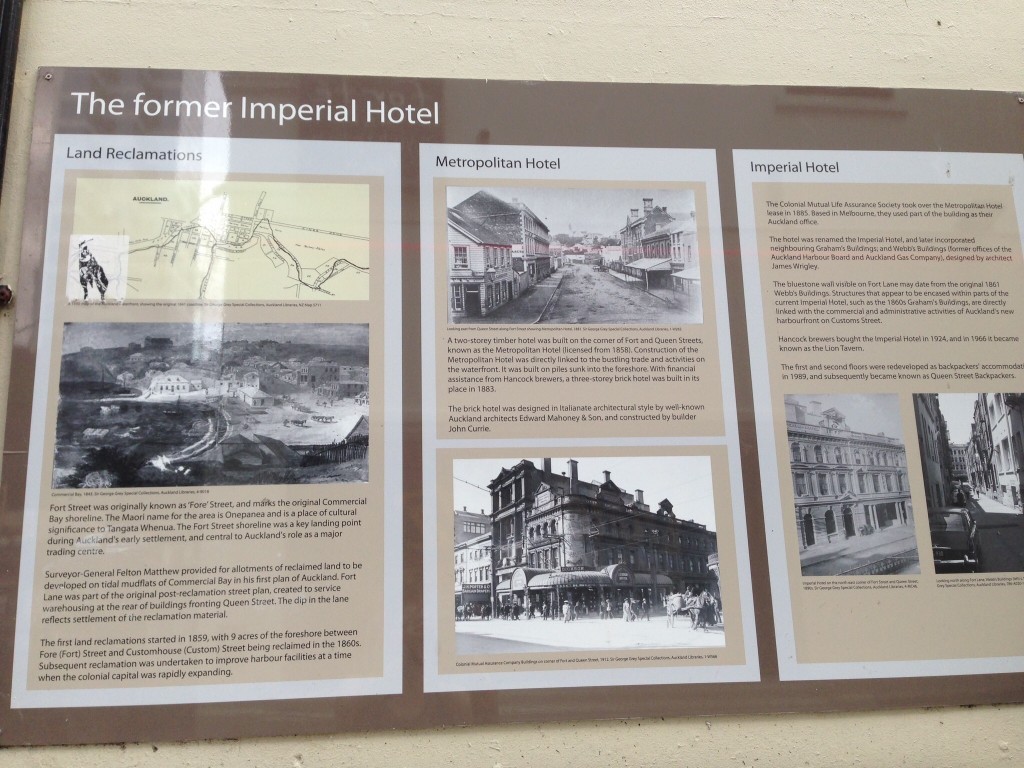 The Queen’s Ferry Hotel was first built in the end of the 1800’s and granted a license to serve liquor in 1865, making it the oldest licensed bar in Auckland. This place has a reputation of being haunted, since 4 people died here. The famous  “hole in the wall” is real and still exists in the brick wall. This is where the sailors used to enter and leave the pub after hours to avoid police curfew. The hotel has been inundated  by artists and journalists  since its opening. 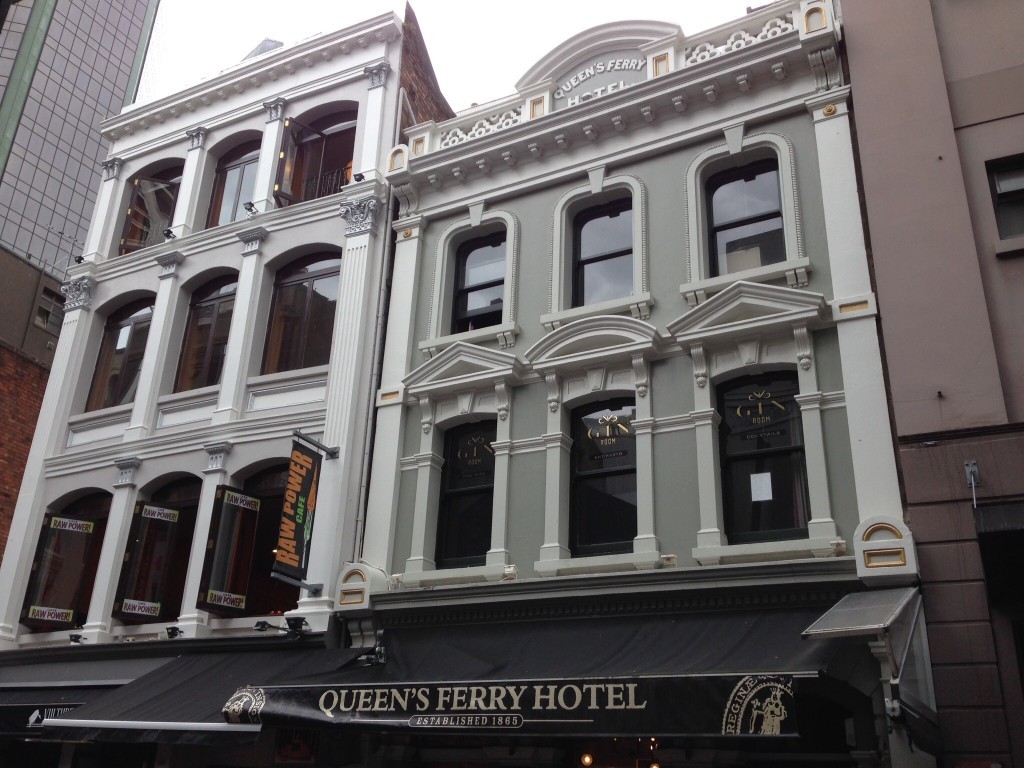 The Occidental Hotel was opened at approximately the same time by an American sailor, and quickly became famous for being one of Auckland’s finest hotels. Recently, this historic building was transformed into the first Belgian Beer Cafe in the Southern Hemisphere. 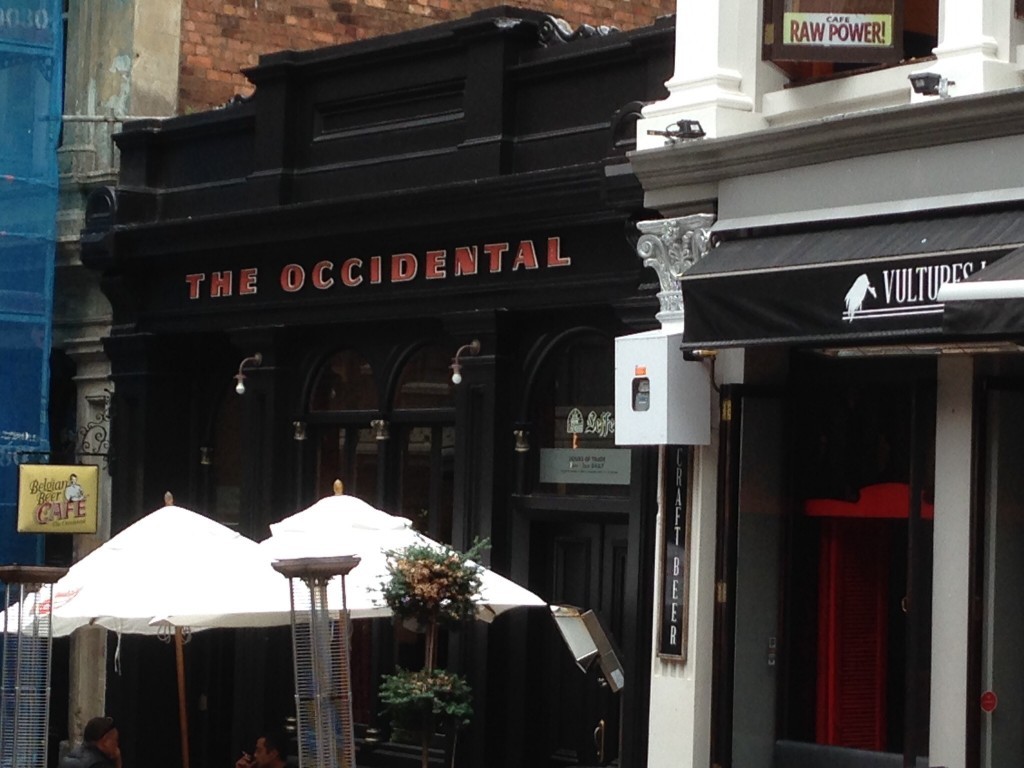 The impressive Sky Tower was built in mid-nineties in only 3 years, and immediately became a landmark of Auckland. It’s being used as a telecommunications and observation tower. Attracting more than half a million visitors every single year, it offers restaurants, offices and sky walking tours. If you look closely, there are 3 people in orange jumpsuits taking a tour on the observation deck. 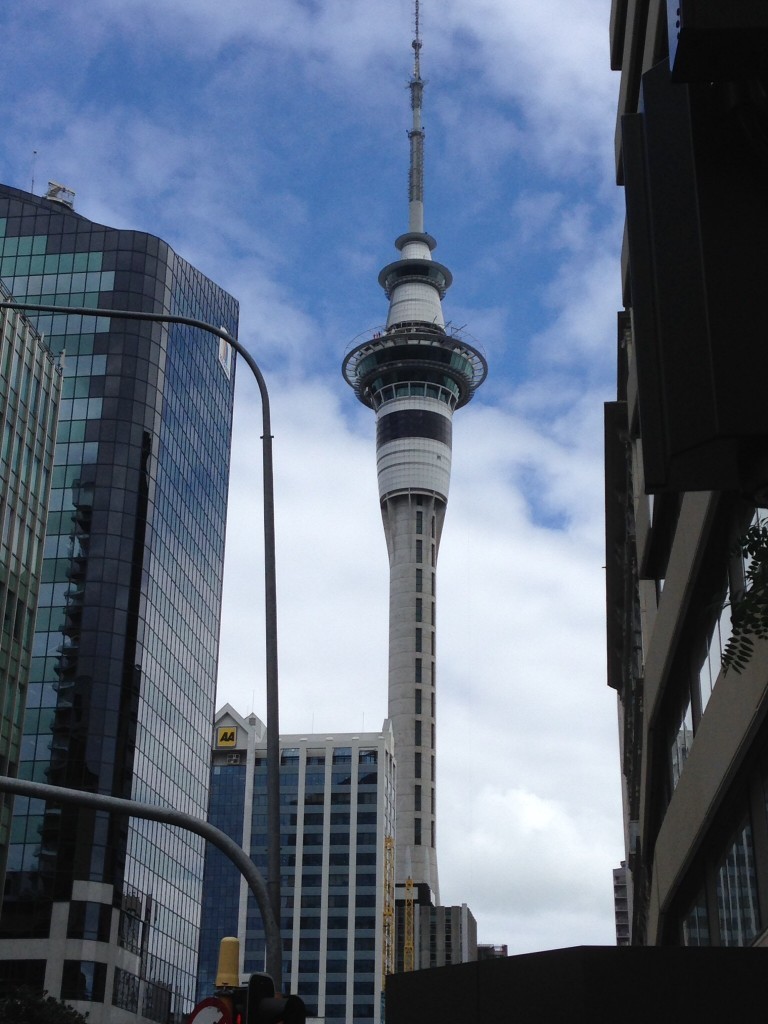 I thought it was a cute piggy. We stopped at a small square nearby for a short brunch. 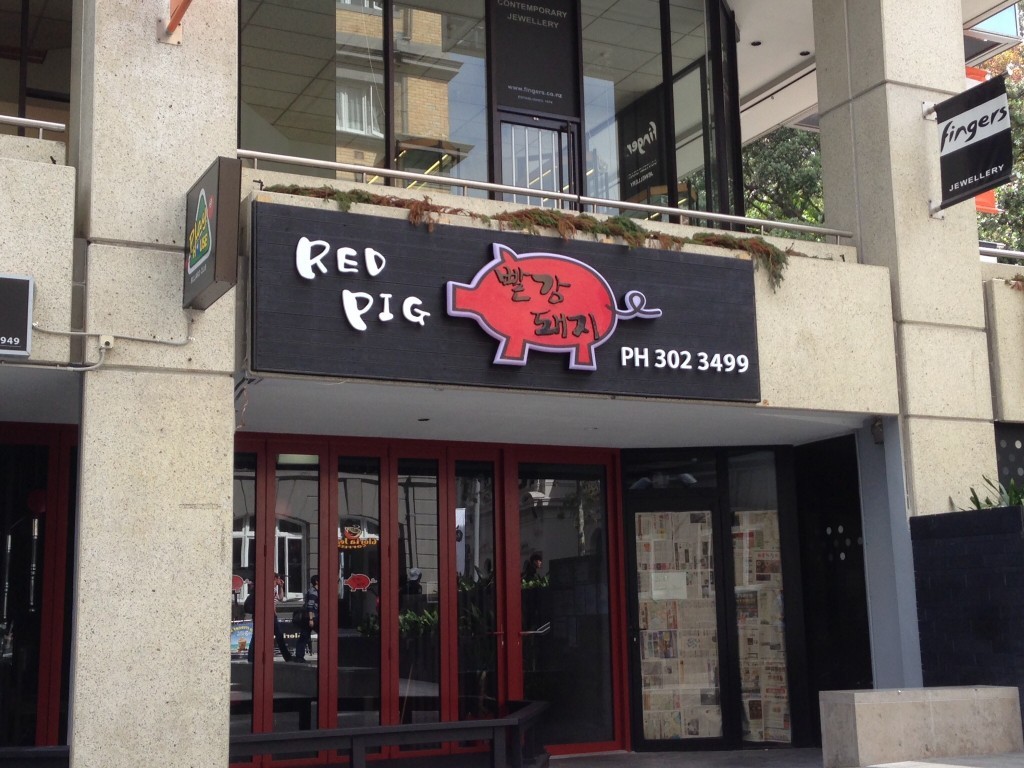 And the longest queue of starving people was in front of “No 1 Pancake restaurant”. Obviously, it was very good. 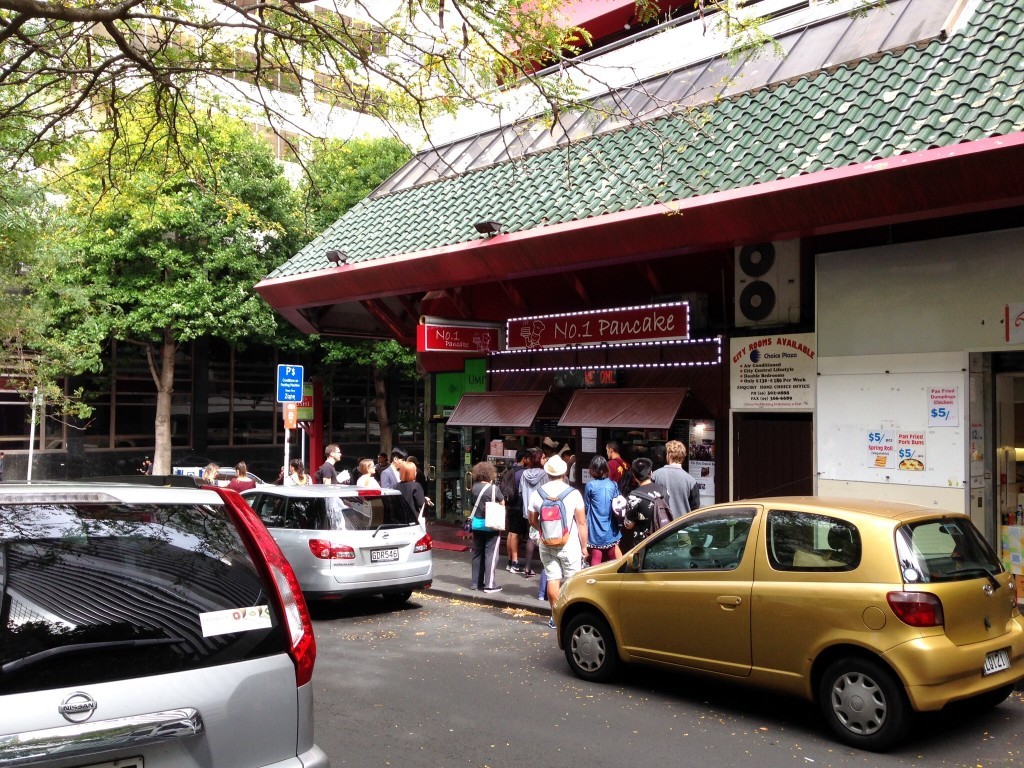 One of the NZ artists decided to put unusual benches along Queens Road. She took 2 words WAND and DEED and by changing one letter at the time she completely changed the meaning of those words. 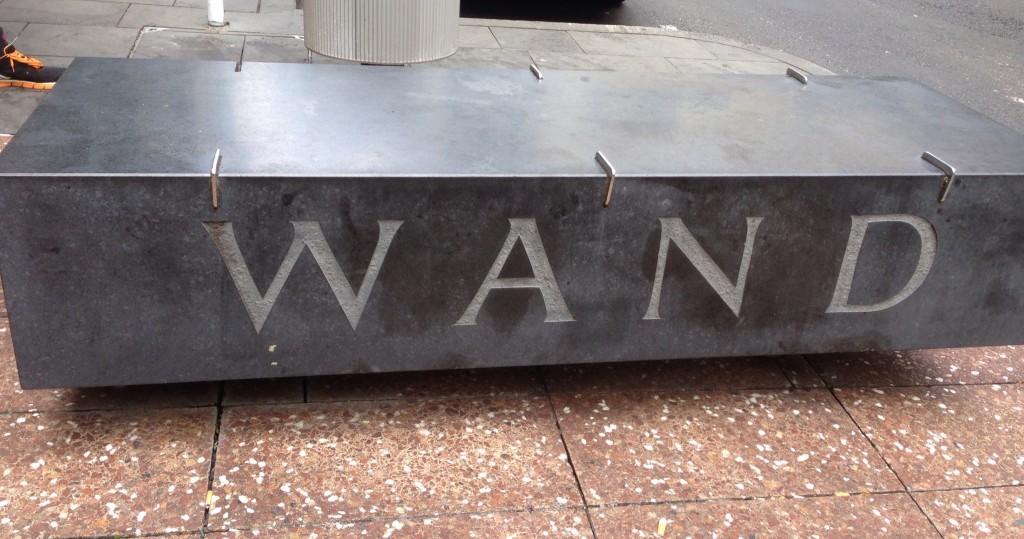 This bench had undertaken 3 changes by this point. I thought it was quite interesting idea. As well as very practical solution for tired tourists and visitors.

This tiled wall has some connection to women’s movement in NZ. Sorry, can’t remember what it was exactly. 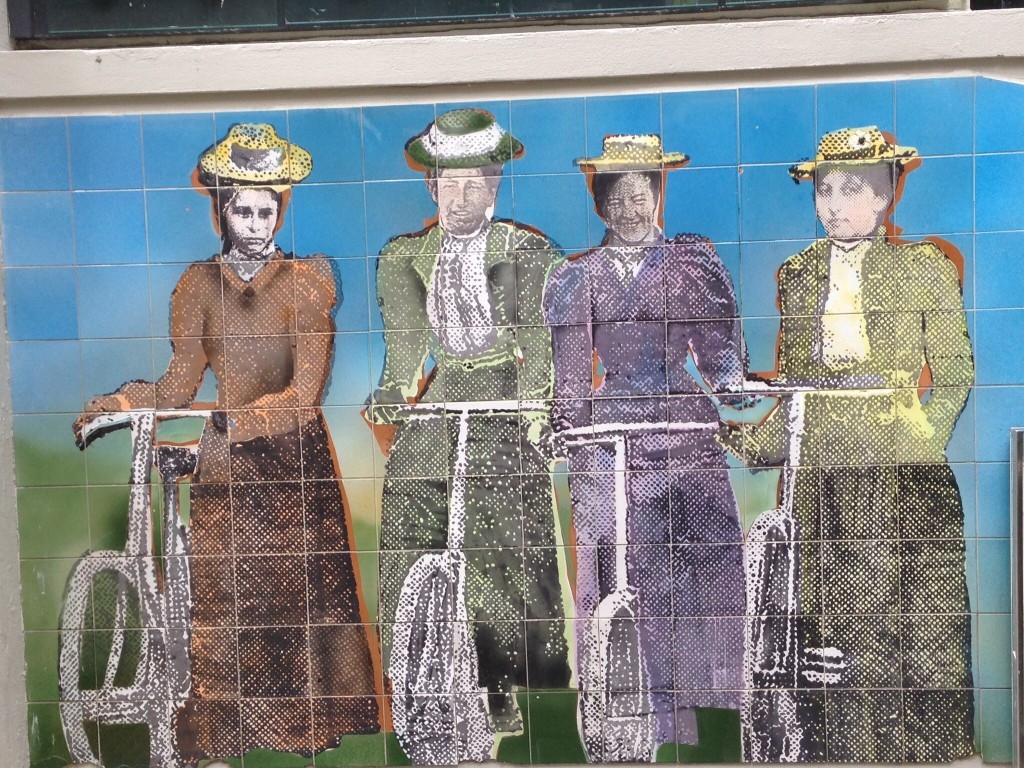 This is the Auckland Art Gallery Toi O Tamaki. Originally it started as a Library, where the majority of books and art objects were collected by first Governor Sir George Grey.   Nowadays, the collection has expanded to include a wider variety of periods, styles and media, and there more than 15,000 exhibits  on display. 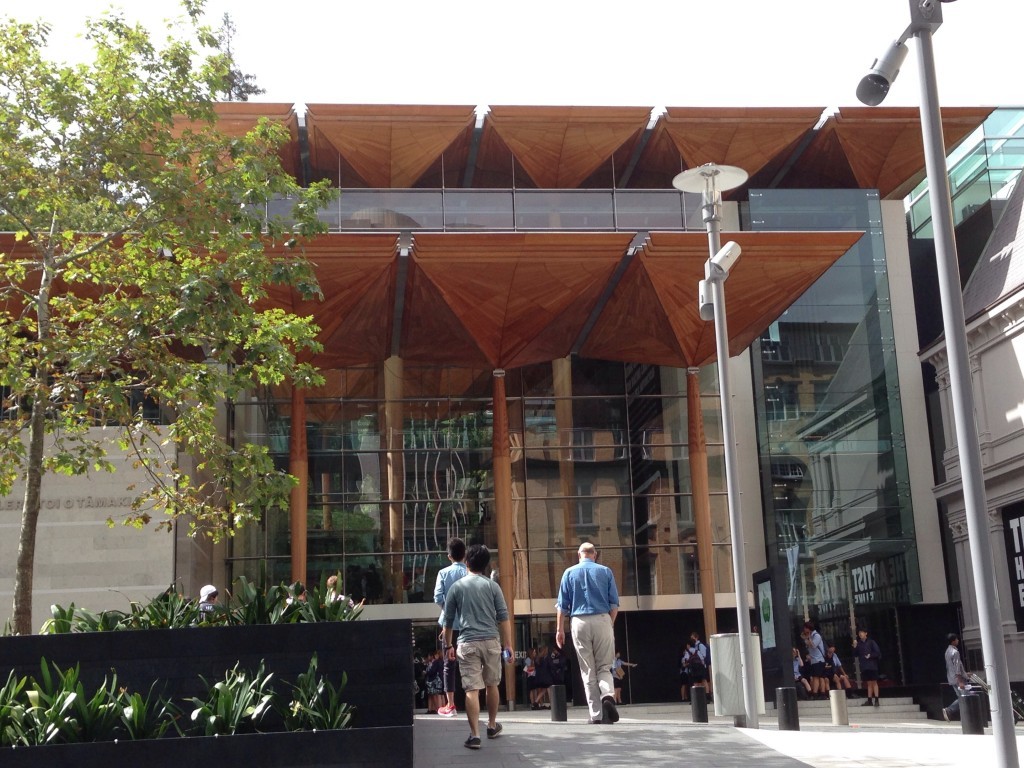 These canopies are designed to mirror the trees at nearby Albert Park, which can be seen through the large transparent walls of the exhibition spaces. The Auckland Art Gallery  has been awarded World Building of the Year 2013 at the World Architecture Festival in Singapore. 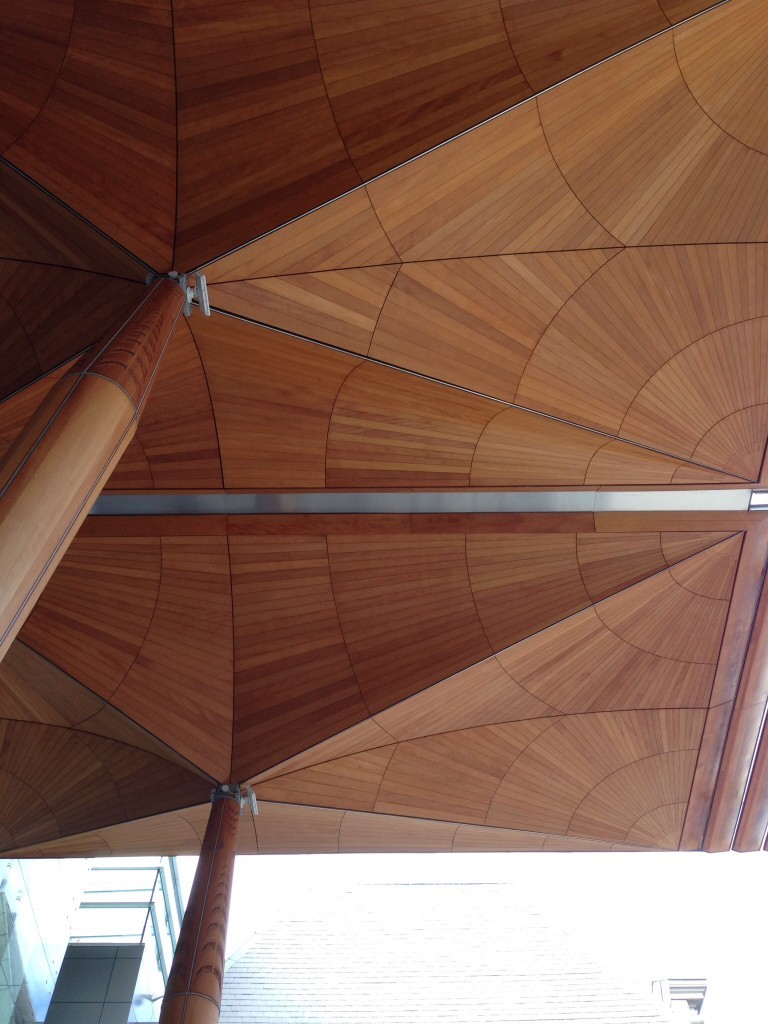 The historic Albert Park is the heart of the city. Our guide is standing in front of  the Queen Victoria statue, which was the first statue of her in the country. 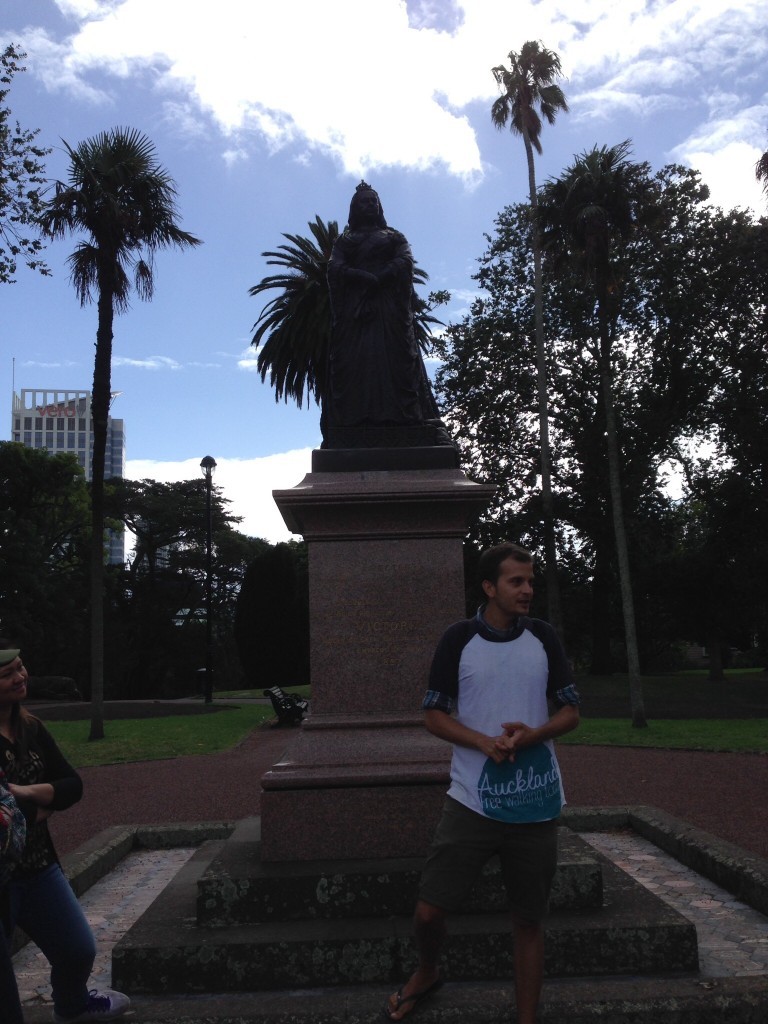 The old wrought iron Victorian fountain has been a central feature since the park’s early development. 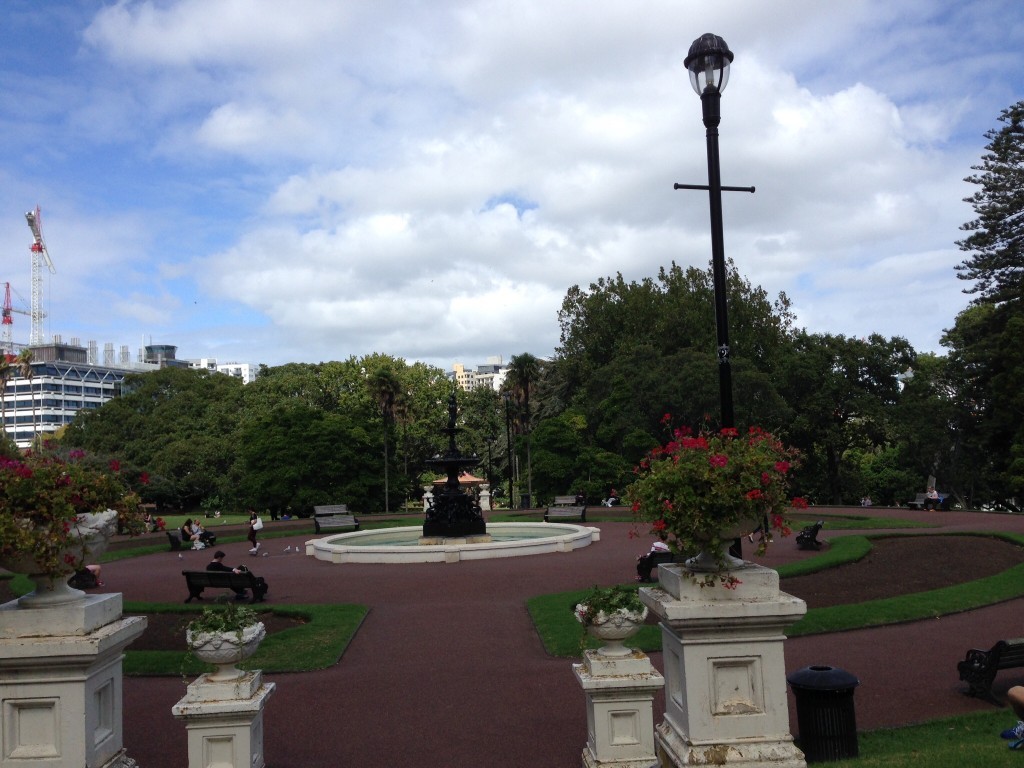 Walking through the park, we saw a magnificent sight -the clock tower of the old arts and commerce building at the University of Auckland.  It was built in the mid-1920s and for decades it was a focal point. It still remains a centerpiece of the campus.  This was the first University in NZ. Now, it has 8 Schools and Faculties and about 40000 students.  The University grounds are in immaculate condition with lots of grassy areas for students to chill out. Some buildings are accessible for visitors, but we just did not have time. And this was such a shame. 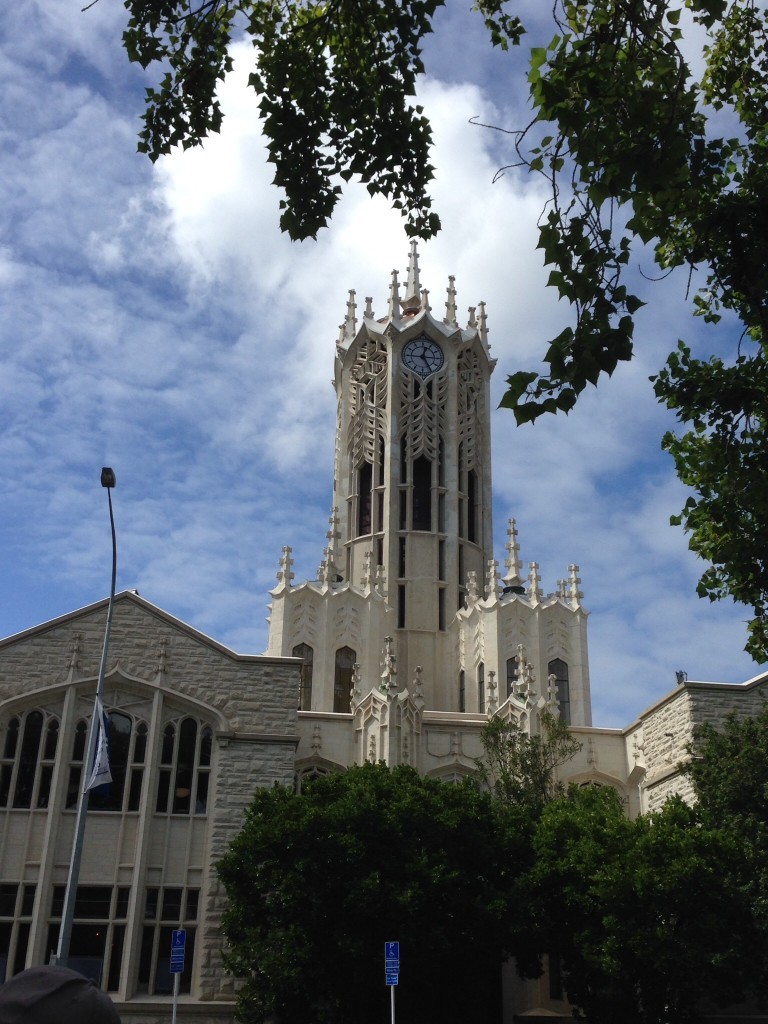 This “green” house was on the street corner. I could not resist to take this photo. Just have a look at the greenery. I could not determine the plants are covering basically all the surface, but my guess would be ivy. 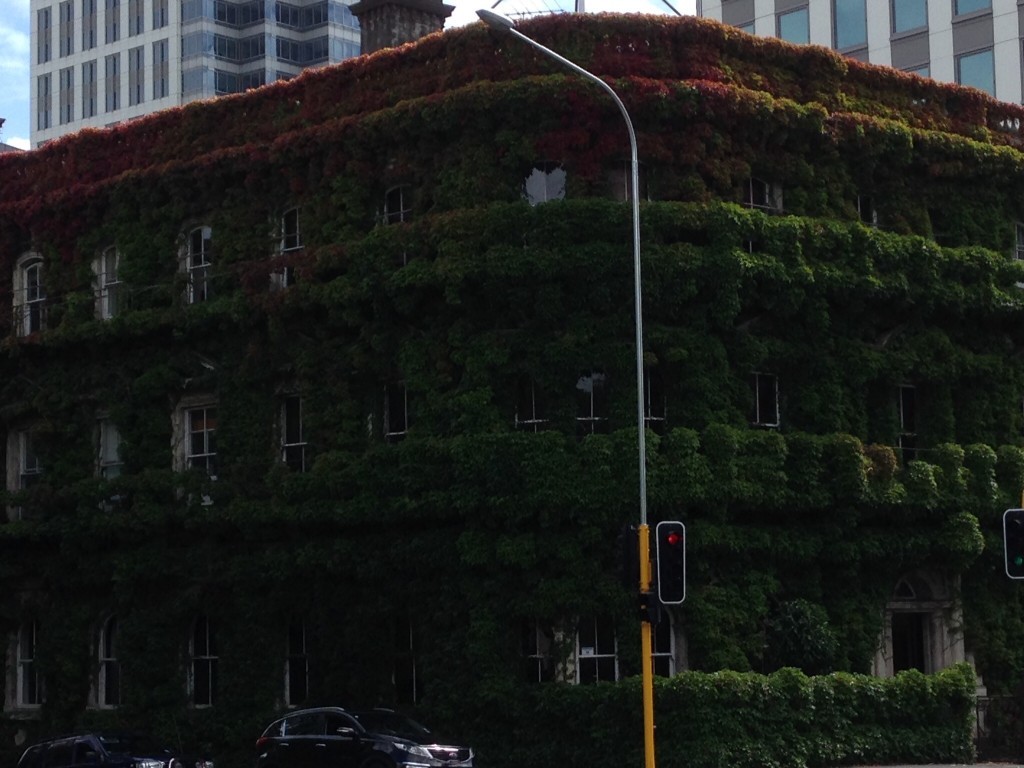 Auckland Freemason’s Hall was built in the early 20th century and resembles European-style architecture. This building is a good example of city growing up since there is absolutely no land to spread out. Oskar pointed out to us that the old facade is still intact, but the middle was gutted and the new tall part was built to accommodate growing needs of the municipality. 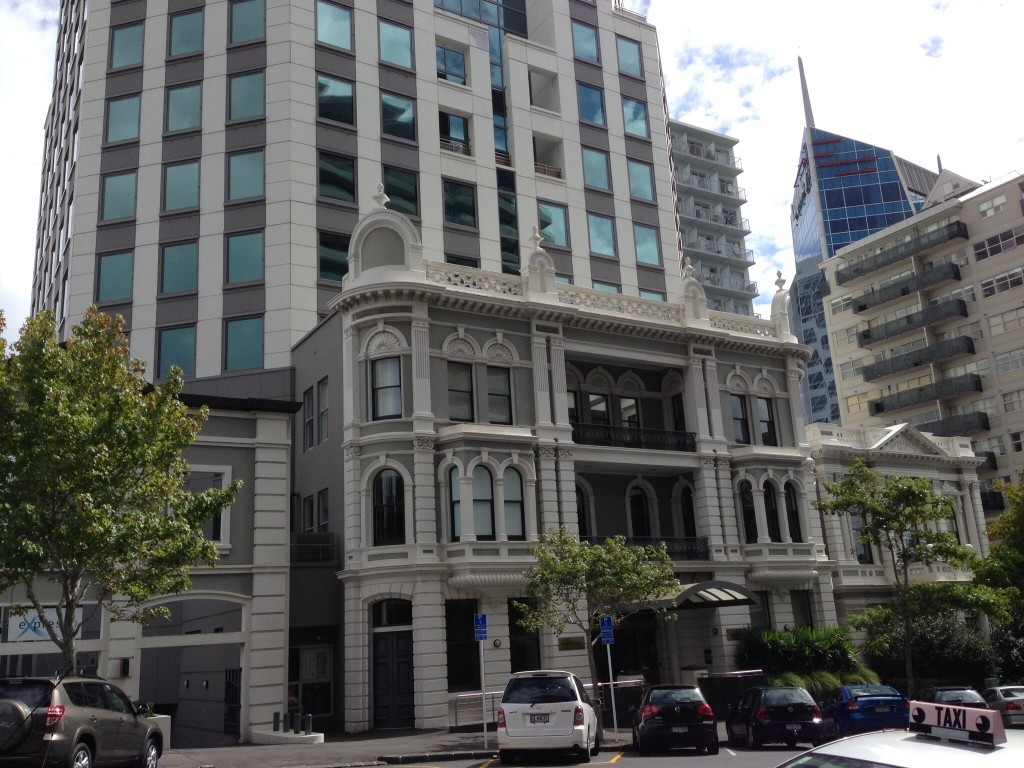 Huge old trees create special atmosphere at the park. People like take their photos on the horizontally spread branches. If you look closely, there are some support frames to prevent breaking of the branches due to their own weight (or combined weight of many not so slim tourists). 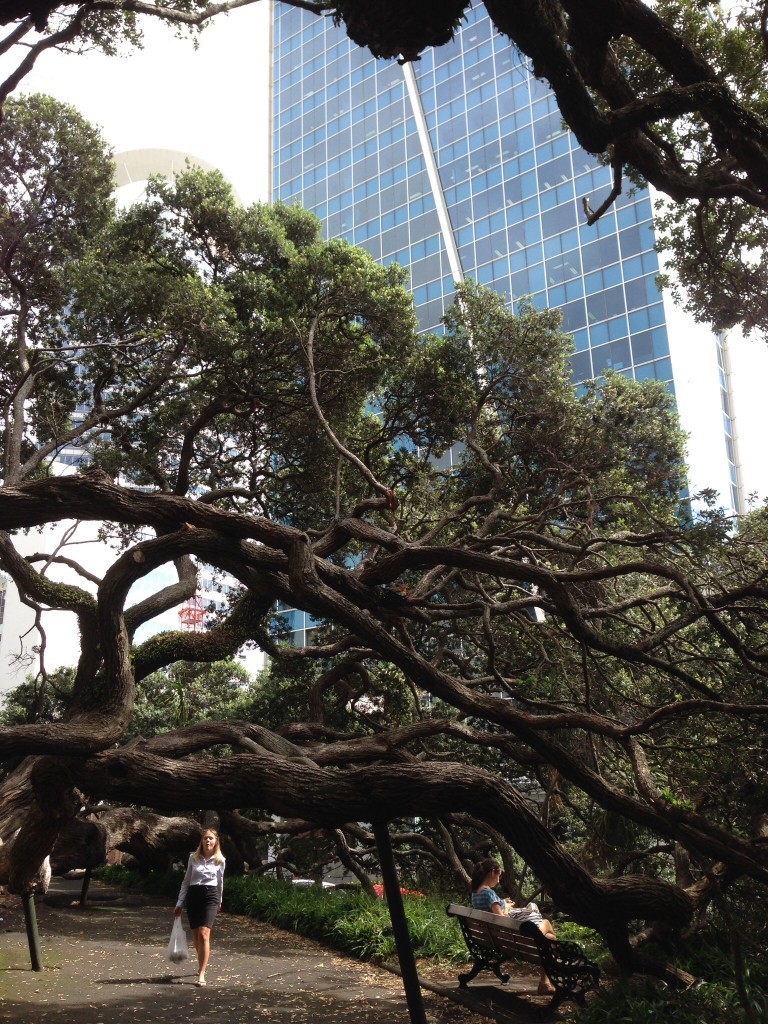 This plaque is very interesting. Apart from commemorating the memory of the Reverend John Frederick Churton, it is also shows that city of Auckland doesn’t want to waste money. Have a look at the last line and pay special attention to word “Wors”.  It was such a silly mistake, almost unnoticeable, so someone decided to insert letter “K” and keep the rest. Very clever!

I bet nobody would notice anyway! 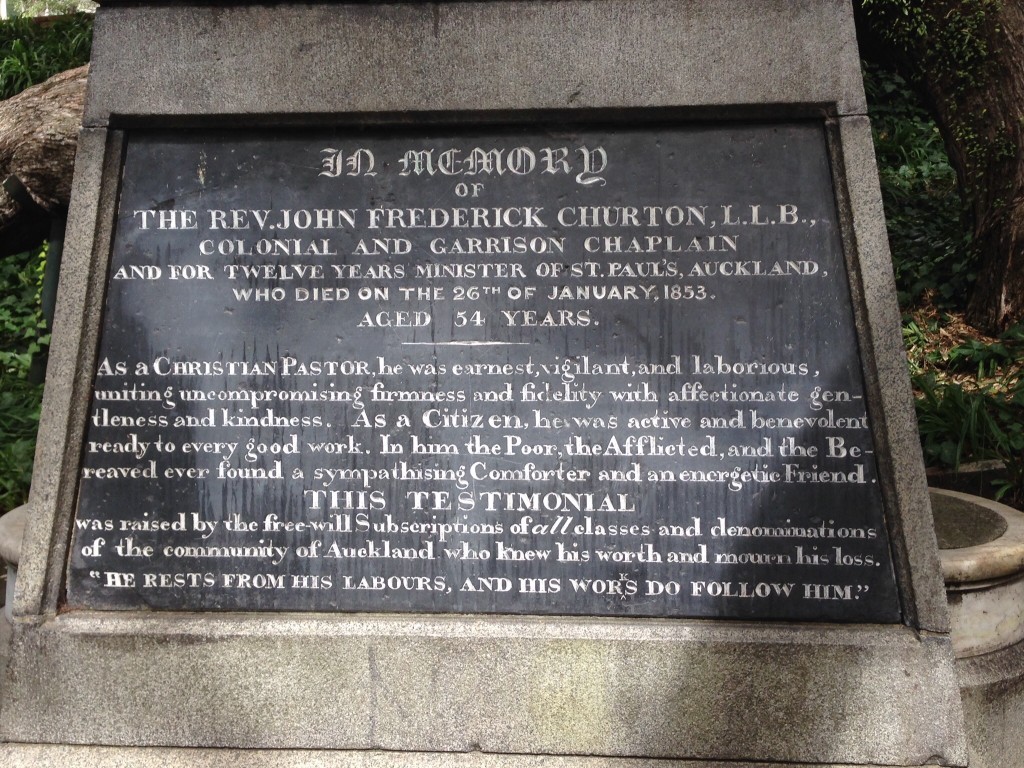 This is another example of the same principle of building up. Northern Roller Mills house was established in 1860, but was modernised recently. This place was the first cookie bakery in Auckland. And many people still remember it as such. 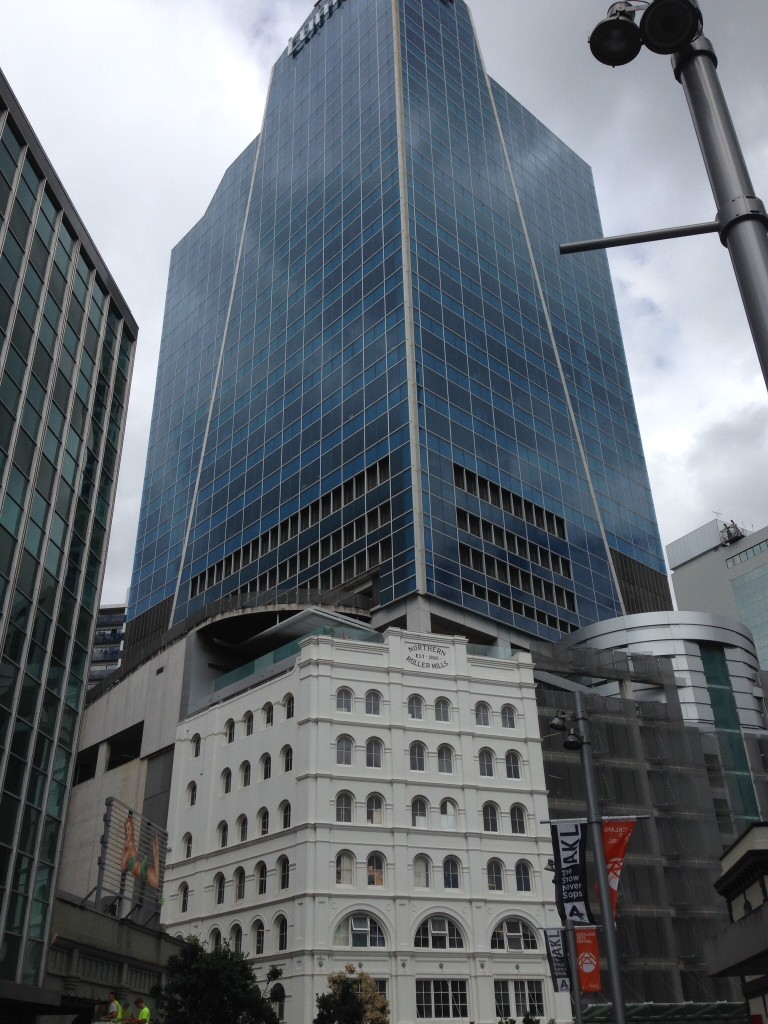 Have a look at this building. It has an elevator on the outside and the floors are marked with large numbers. The elevator is now at the fifth floor. 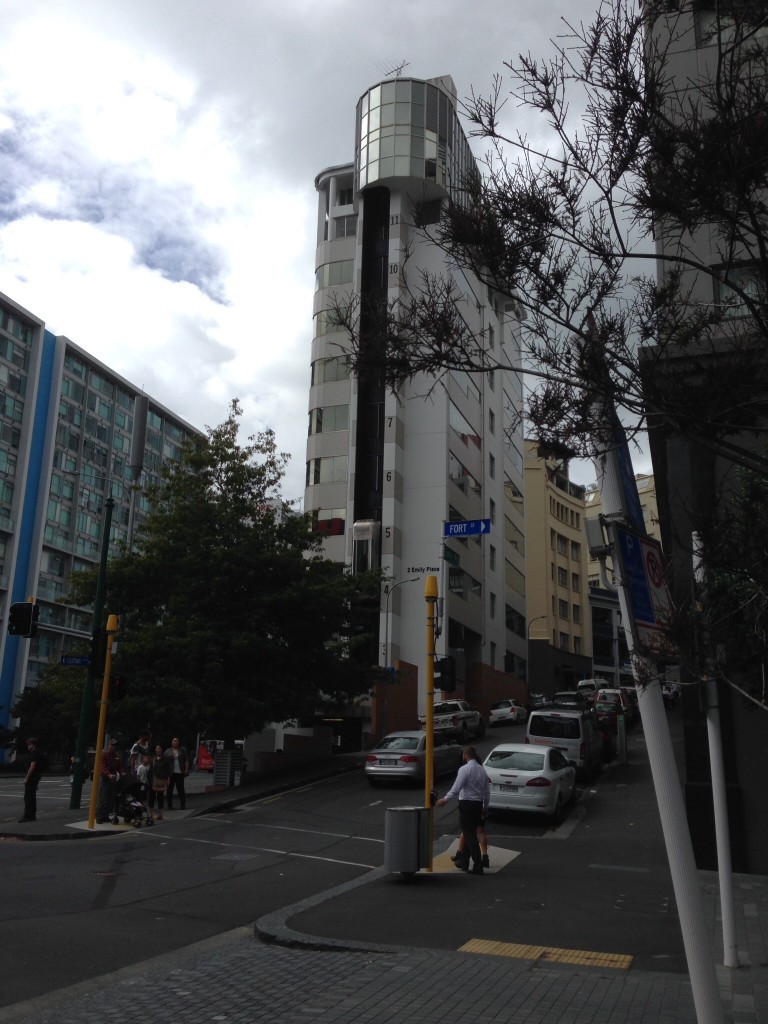 I loved this. These structures are representing volcanoes which are plentiful in New Zealand.  If we look down through the thick glass on top, we can see railway station below. 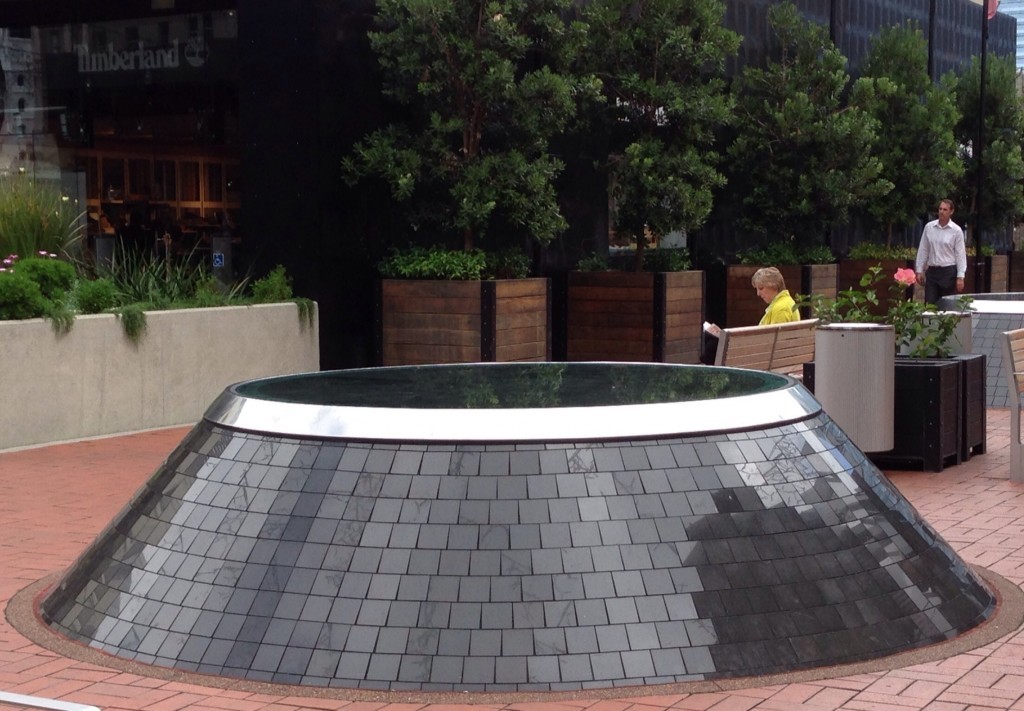 If we look from the bottom up we can see those beautiful kaleidoscope-like domes. 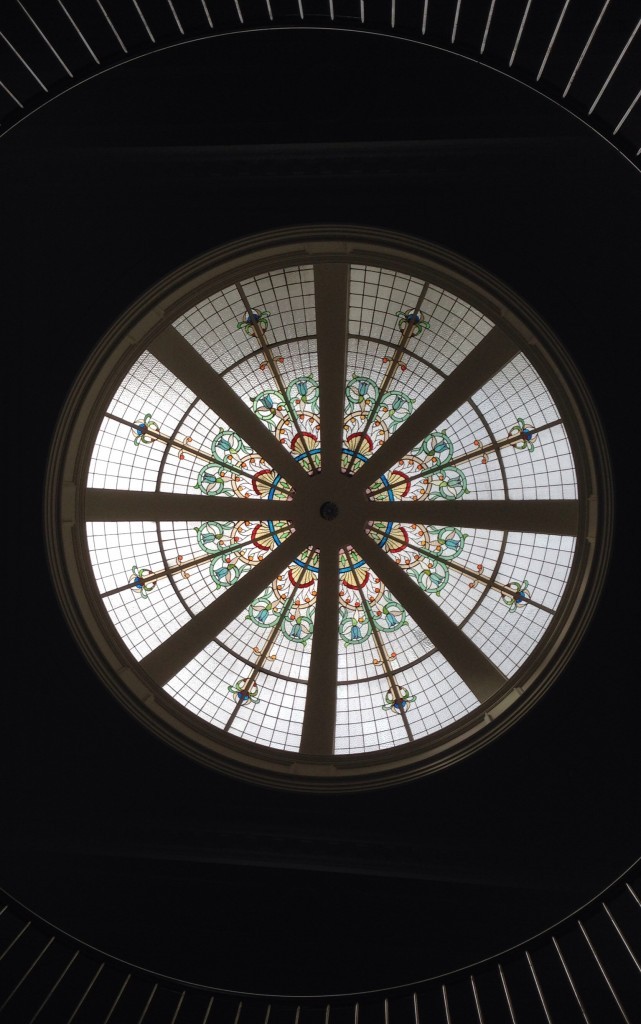 And when we look at the train station, the bright round spots come from the “volcanoes” upstairs and provide additional natural light for the underground areas. 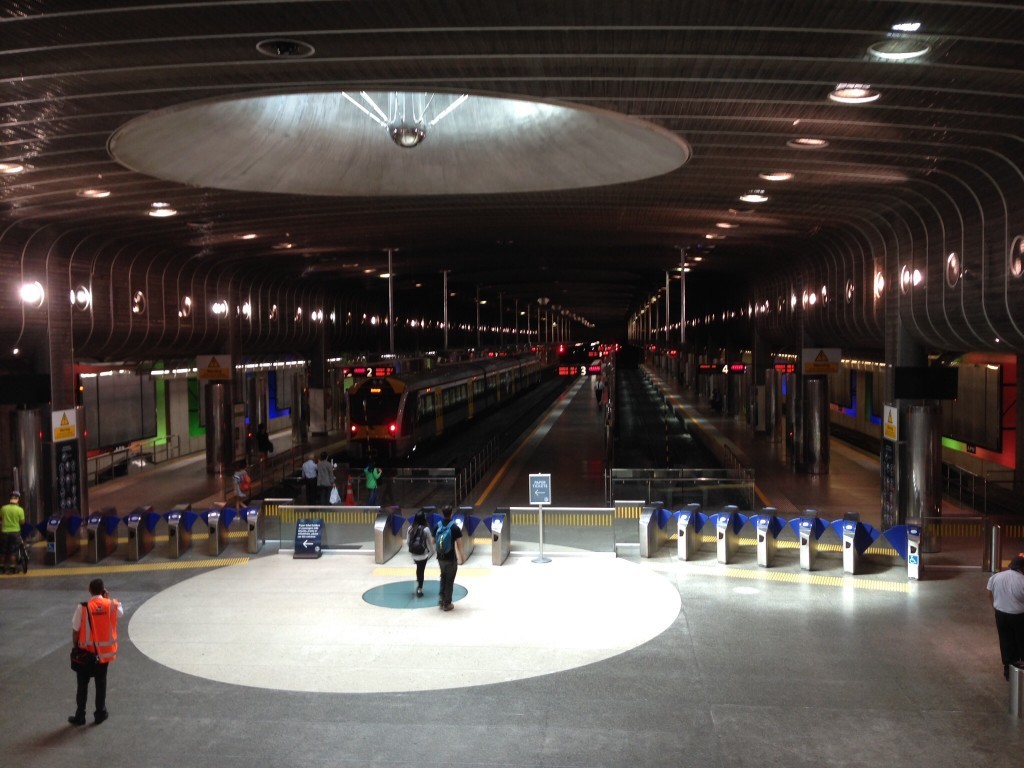 And of course, an Indian restaurant.   I have to say that I was so preoccupied with stories and sightseeing, that I almost missed this place. But my new friend Kirti pointed it out to me and highly recommended it. Unfortunately, I was leaving in a few hours and couldn’t go there. Maybe next time. 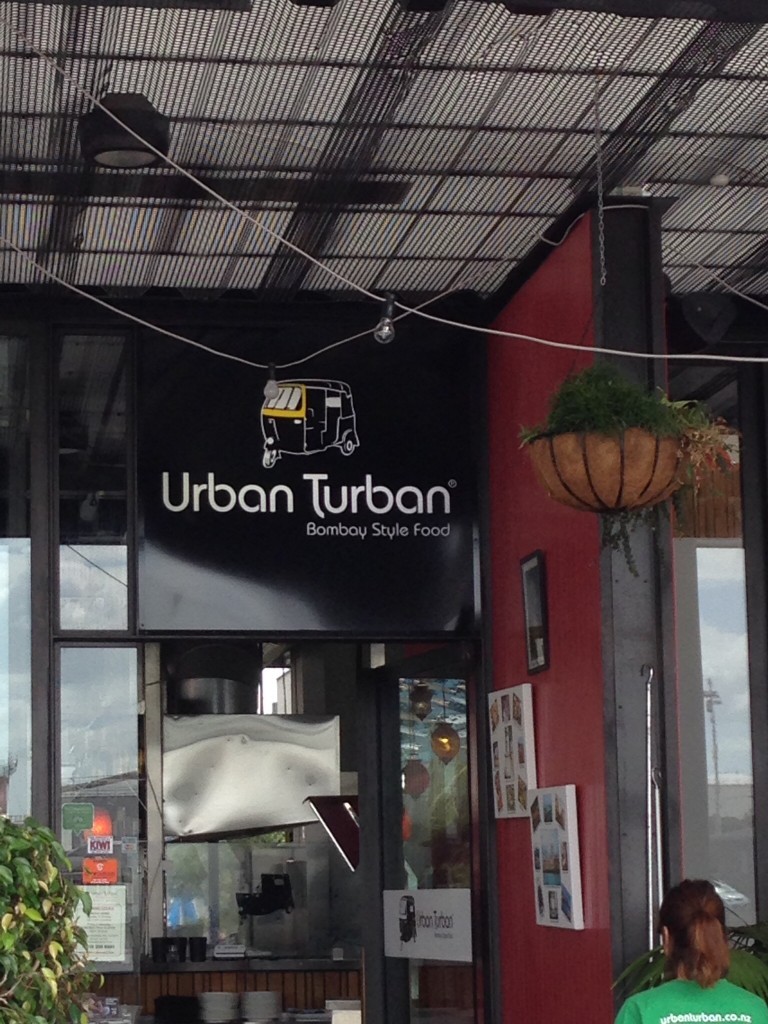 Imagine my surprise, when I met this cow. I quickly realised that she is a sister of the cow-model from my other story Mini Himalayas or Cow love story. I wonder how she got here and why? 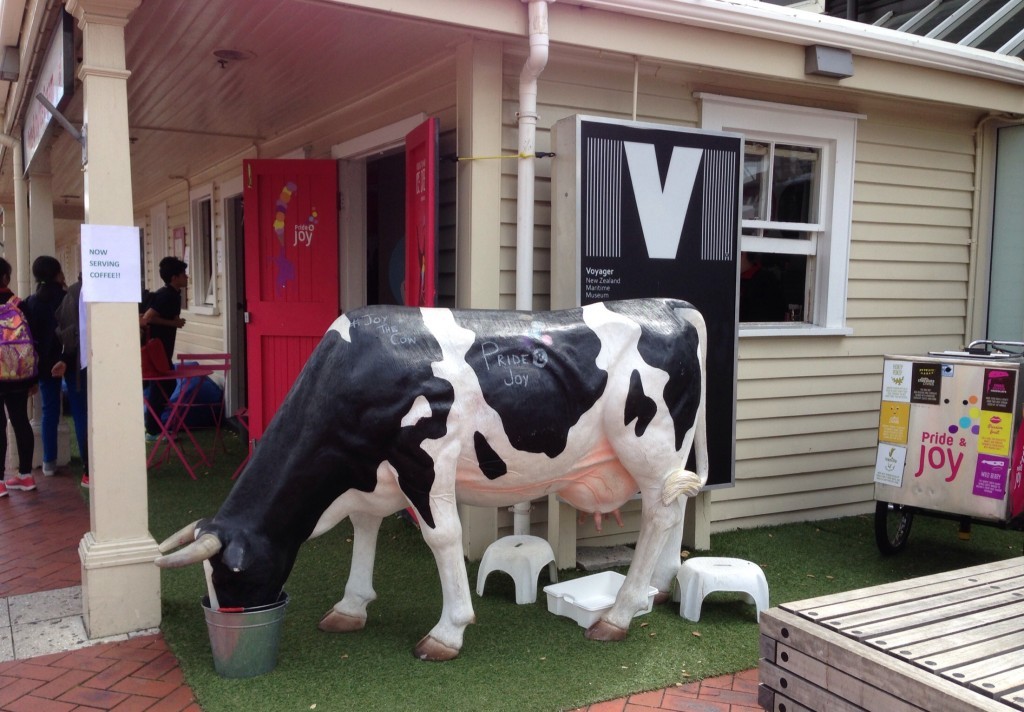 We walked across Te Wero Bridg to Silo Park. This is a large marine with an incredible number of yachts and boats moored. I think there are more yachts than cars in Auckland. One super expensive boat of Russian oligarch was parked there. Apparently, there is one cabin where they can create snow if needed. I would love to have a closer look, but did not have any time left. One of the visitors – a lady from Canada – told me that they could get pretty close and had a good look at it the night before. She was very impressed. Imagine, how it is inside…

And this is our happy group on completion of the tour.

Instead of finishing at 1.30 pm, we actually finished at 2.40 pm. I knew I was running really late for the airport, but decided to stick around until the end. If only I had one more day, I would’ve visited some of the places. I’d also go to Symonds Street cemetery which is one of the oldest around (I have a very strange love to cemeteries and churches). But this is something to keep in mind for my next visit.

I made it to the airport on time and  managed to catch my plane. At the customs  this scary looking guy checked my passport and asked if I enjoyed my visit. Barely alive with fear I whispered to him “Yes, very much so. Thanks”.

– In this case please come again soon, he replied and smiled.

I smiled back and rushed to the plane. 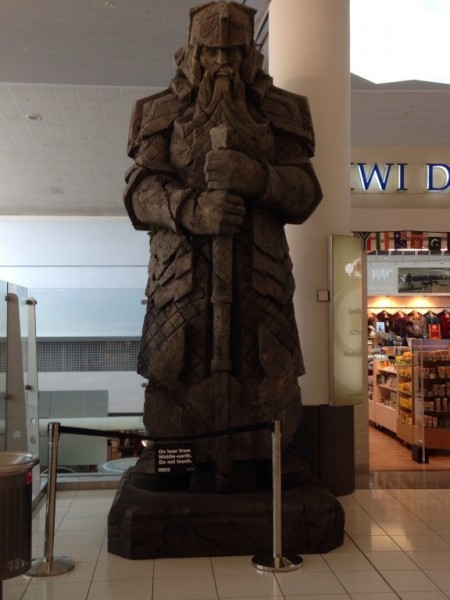