It was a long flight. Thank God, we had just landed. I decided to hire a car this time. Guess which car I’ve got..

Total chaos on the roads. Doesn’t matter, I have to drive somehow. My destination is not that far after all. My heart is jumping up and down – I am in India.  Exit to Bombay in 1 km.

After taking the right exit, I suddenly see another sign.  There couldn’t be any town or village with a name like Papatoetoe in India. The joy did not last.. 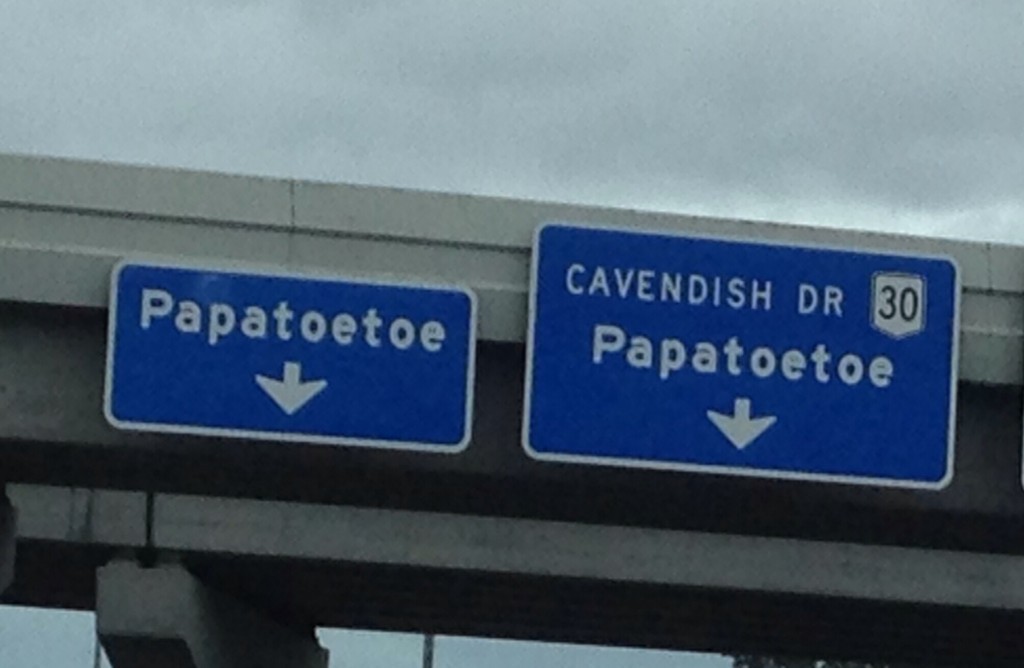 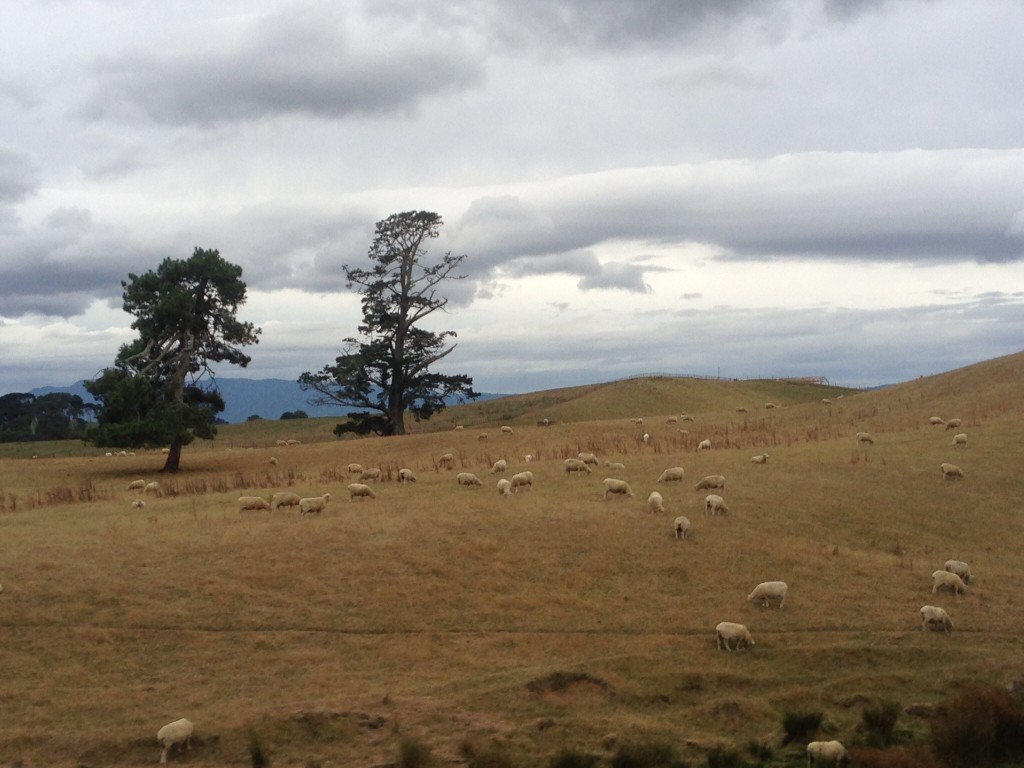 I am going to the Hobbiton – the place where the movies like Lord of the Rings were made. Personally, I have never watched any of them, but I saw those photos in many tourists’ brochures and wanted to visit it. This was my chance.

It is about 200 km from Auckland, just over two hours driving. The roads in NZ are even better than in Australia, and not as busy when you’re out of the city. I love driving there. Such a liberating feeling. 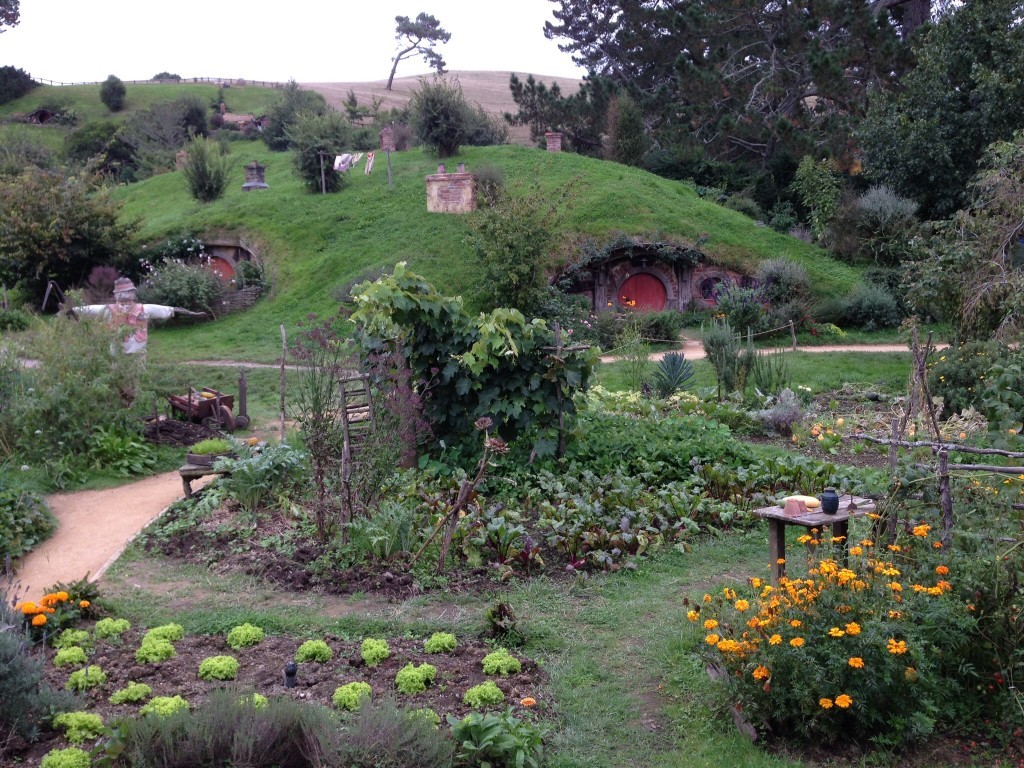 I was in a hurry to catch the very last tour for the day, and made it with 20 minutes to spare. I found a Subway restaurant across the road from the departure point and grabbed a sandwich.

After devouring it in three minutes flat, I was full and happy and was ready for all the hobbits, trolls and other mystical creatures.

Thankfully on this last tour there were only 8 people. One girl from Ireland, father and daughter from Dania, two chines couples and myself. I was very happy, that it was such a small group, because we could take photos without crawling over each other.

We had a nice young guide, who was flirting with both girls and gave me a few compliments. He definitely had his way with women. While on the bus, he told us that this location was chosen because of the hills, small pond and the huge “party” tree. Someone from the movie team traveled in NZ before and this location looked very suitable. Director Peter Jackson arrived with the crew, assessed the farm and surroundings, loved it and offered a contract, that the local farmer could not refuse.

The movie crew organised the auditions in the area, where they were looking for very short, round people, who would be involved in mass scenes. About 800 people arrived for the auditions and only 7 were selected. Since then, these seven people are known in the area as The Chosen. They signed confidentiality contract, as well as the farmers family and the construction of the Hobbiton began.

Everything there is real, or almost real. They employ professional gardeners and landscapers  to look after the movie set. The fruits and veggies are real. I ate a few raspberries and an apple. They grow herbs and veggies, which are used at their restaurant Green Dragon.

Look at the moss and lichen. They had to “age” the wood very quickly. So all those structures were covered with pain. However, they used some tricks – mixed paint with yogurt and vinegar to promote moss growth. And it worked like a dream.

After the movie was finished, Peter Jackson and the farmer decided to continue running this movie set and present it as a tourist attraction.  The success was almost instant. People from all over the world come to see those tiny hobbit holes, carts, wells and the pub.

The attention to detail is just unbelievable.  All the items are very proportional. If it’s hanged washing, then it’s tiny. If it’s chopped wood – then the cart and axe are very little. 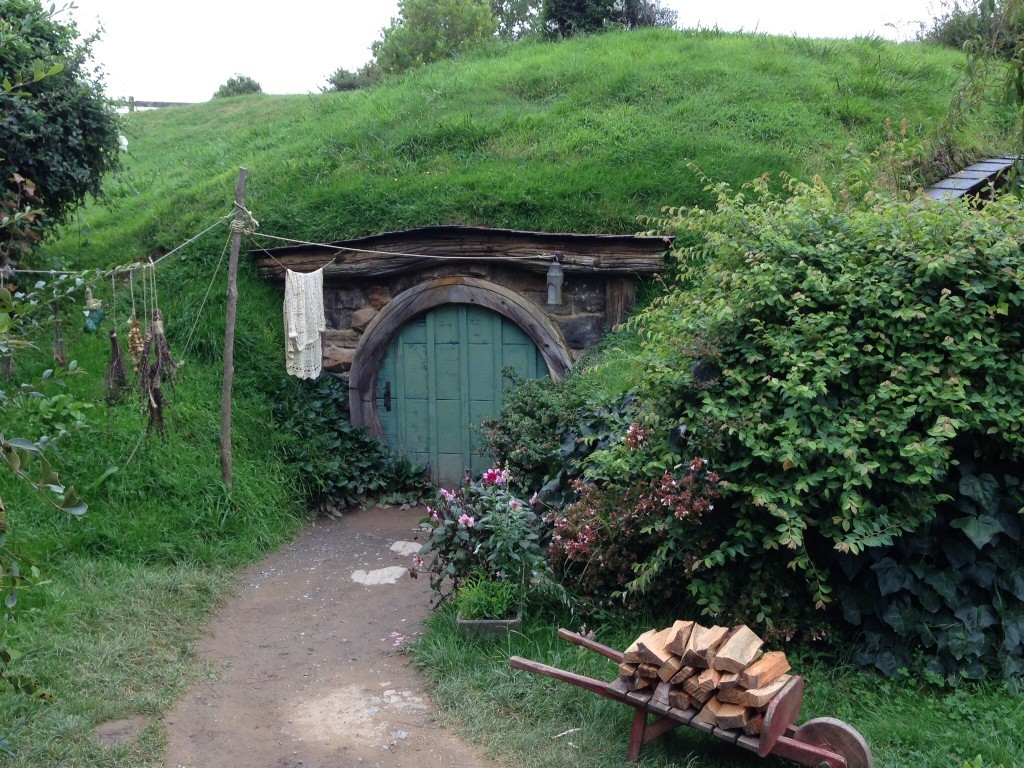 The guide was constantly asking all of us if we remember that scene or that moment from the movie. Every time he asked me, I was scared to say something silly. I could not admit that I have never watched even 5 minutes from the movie. Maybe, they would kick me out… Or even worse – shove me into one of those holes…. 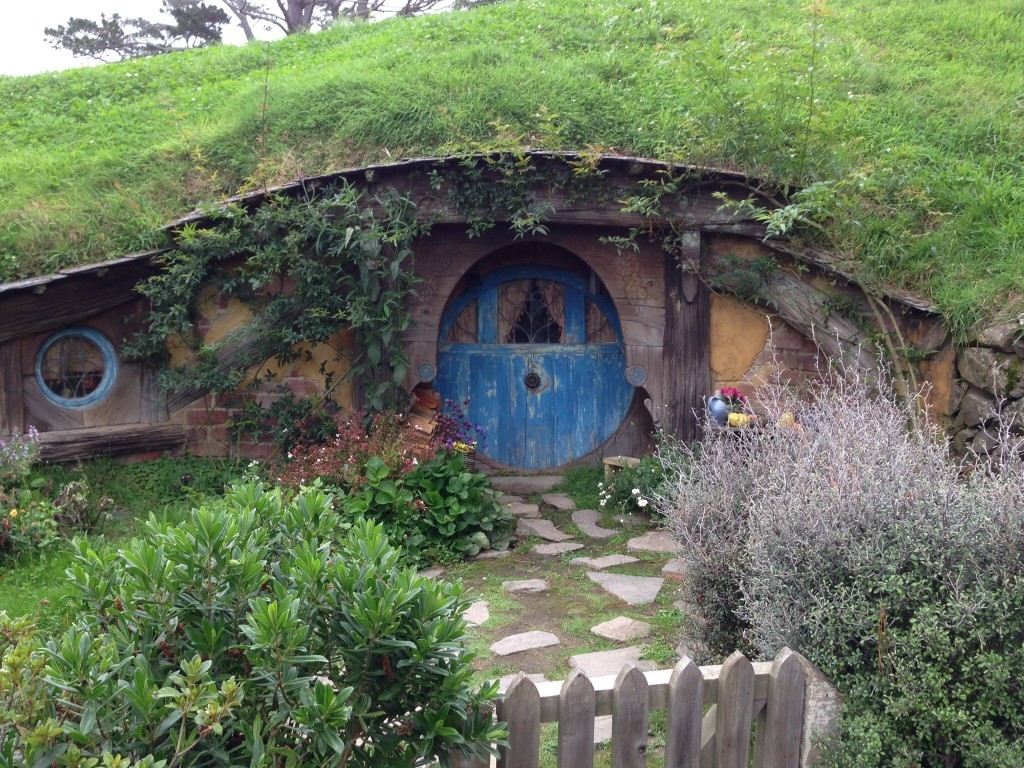 Or  leave me behind in this place overnight….

And here is my fury companion, who travels with me all over the world.

Those hobbit-holes are also known as Smials. My koala loved this tiny one. (Koala is the size of my palm, so you have an idea of the window dimensions). 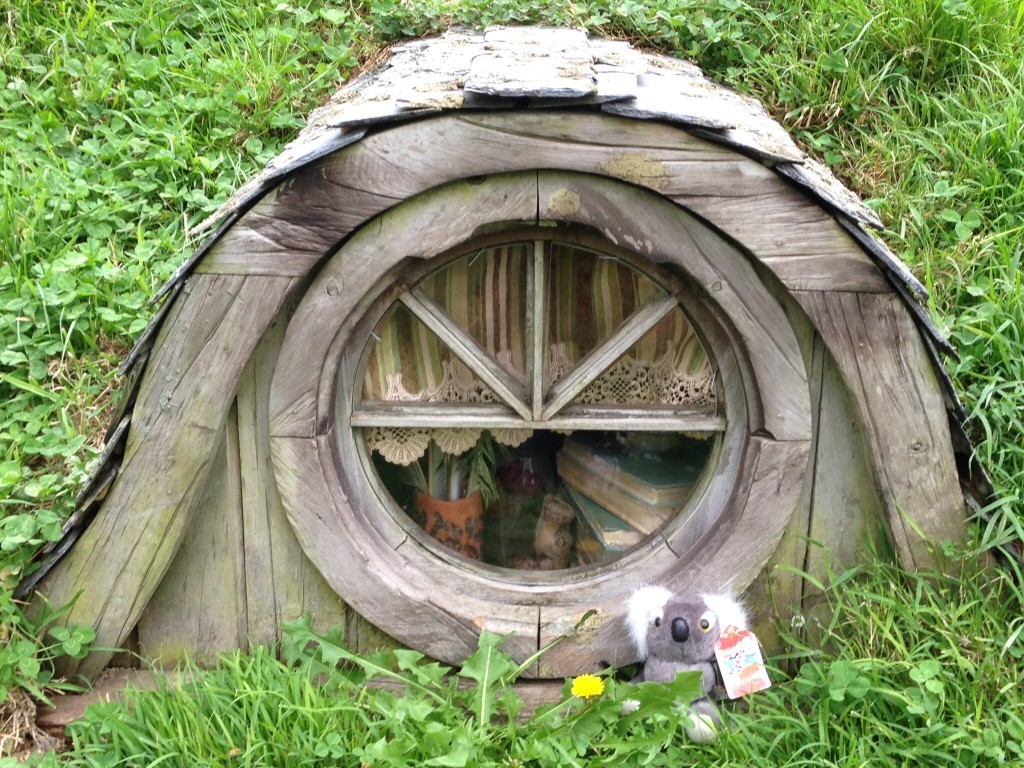 This hobbit was probably rich. Maybe a merchant? Or a chief of hobbits? Or a warrior?

This is a huge dwelling with three windows. 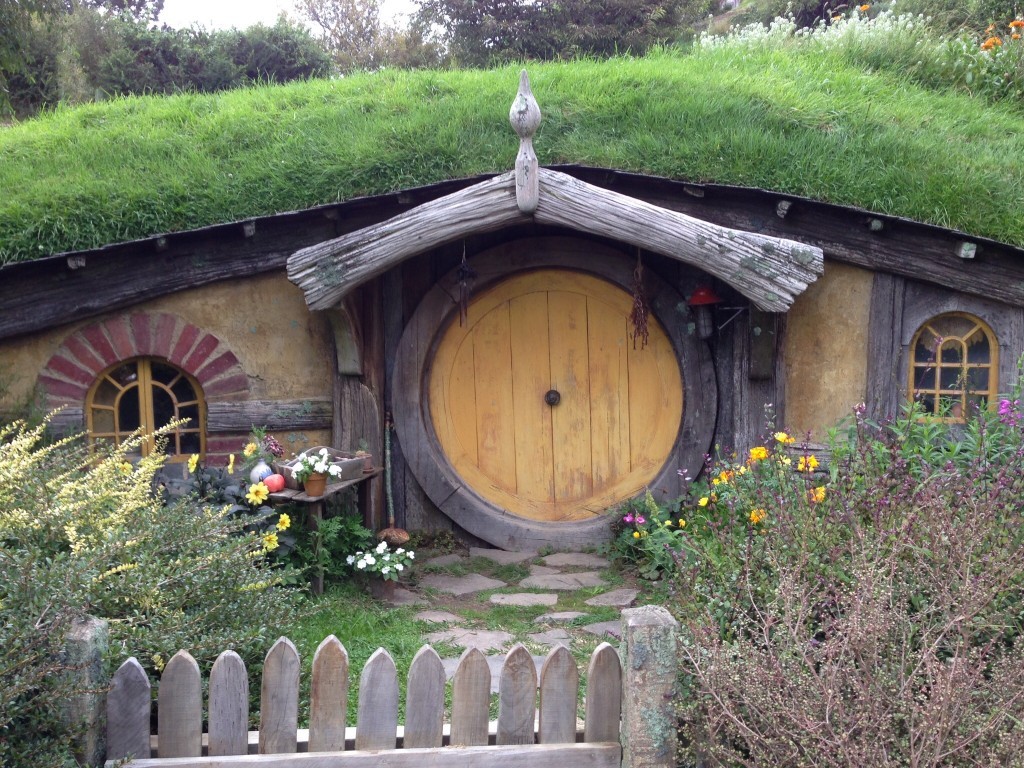 If I understood this right, these two things are bee-hives. 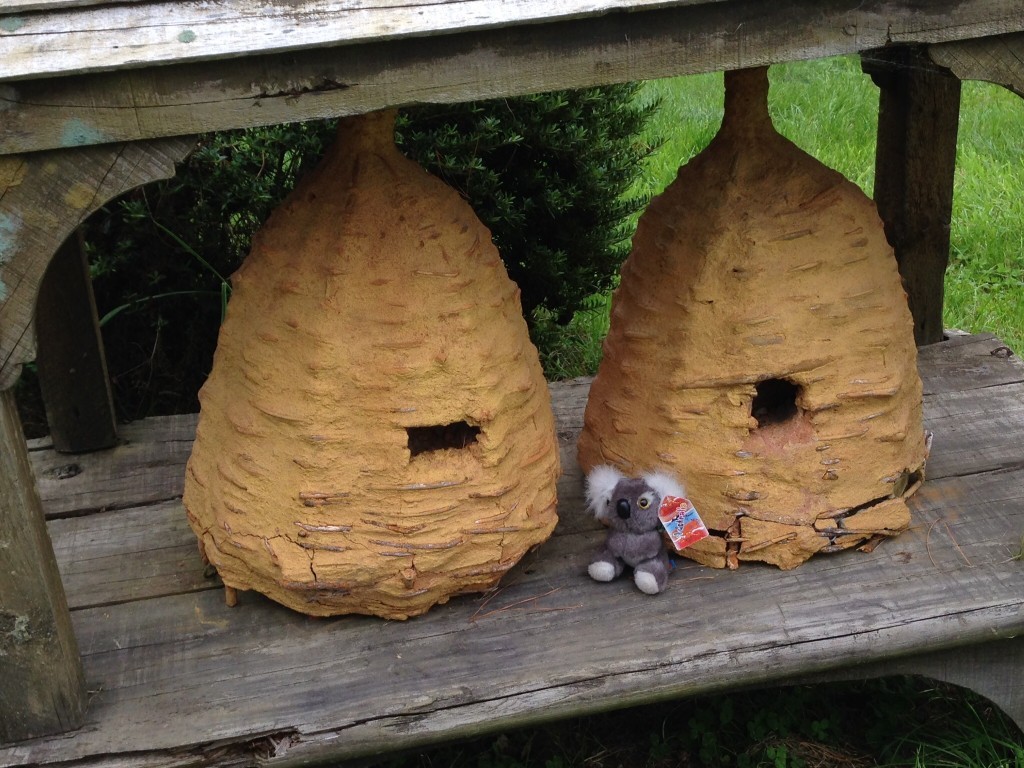 This Smial belongs to a baker. Sacks with flour and bread rolls. I have to admit, the bread was not fresh – it was made from wood. But looked totally real. 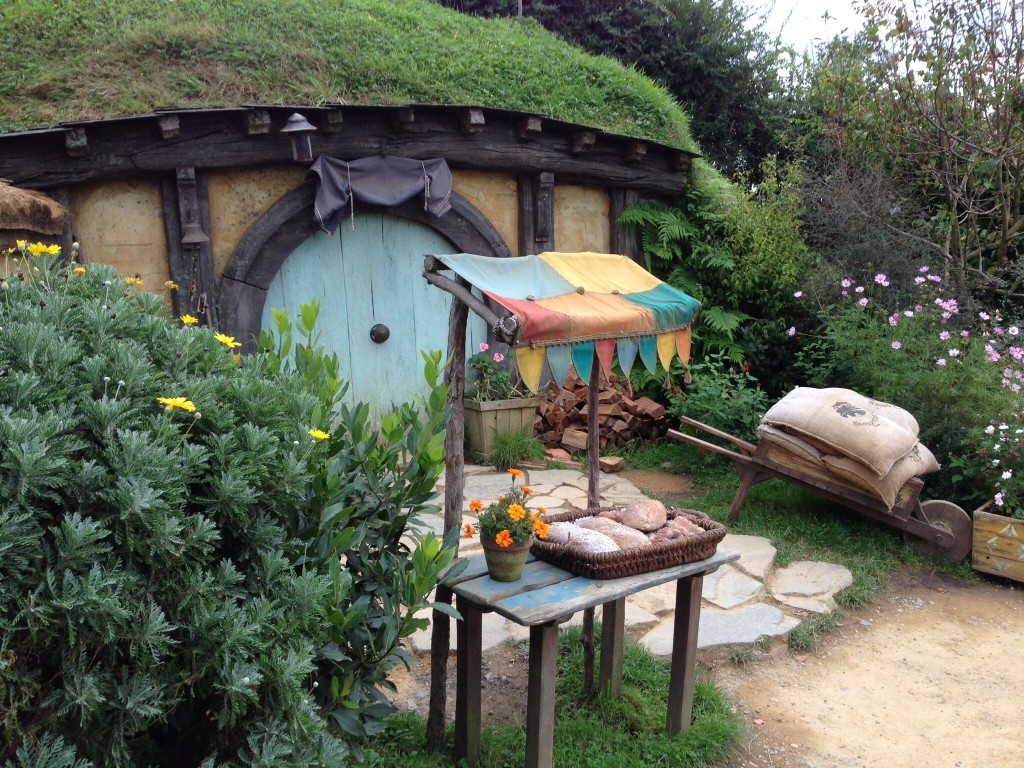 I don’t want to sound disrespectful, but this scarecrow reminds me of the very famous statue of Christ the Redeemer in Rio de Janeiro.  All photos I’ve seen are always taken from the bottom up against the skyline. 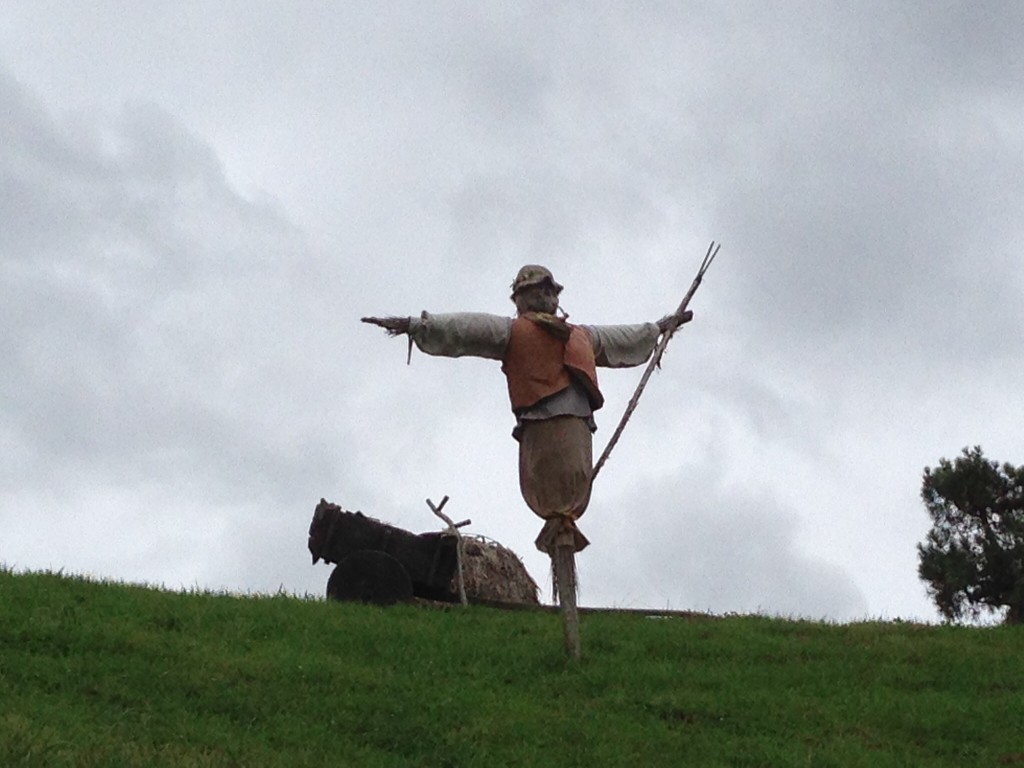 One hobbit-hole is actually accessible for tourists. All of us walked in one by one hoping to see something. WOW. I wanted to see tiny beds, cups and plates, maybe some beer bottles.

This one is very pretty with decorative roof and lead-glass windows. 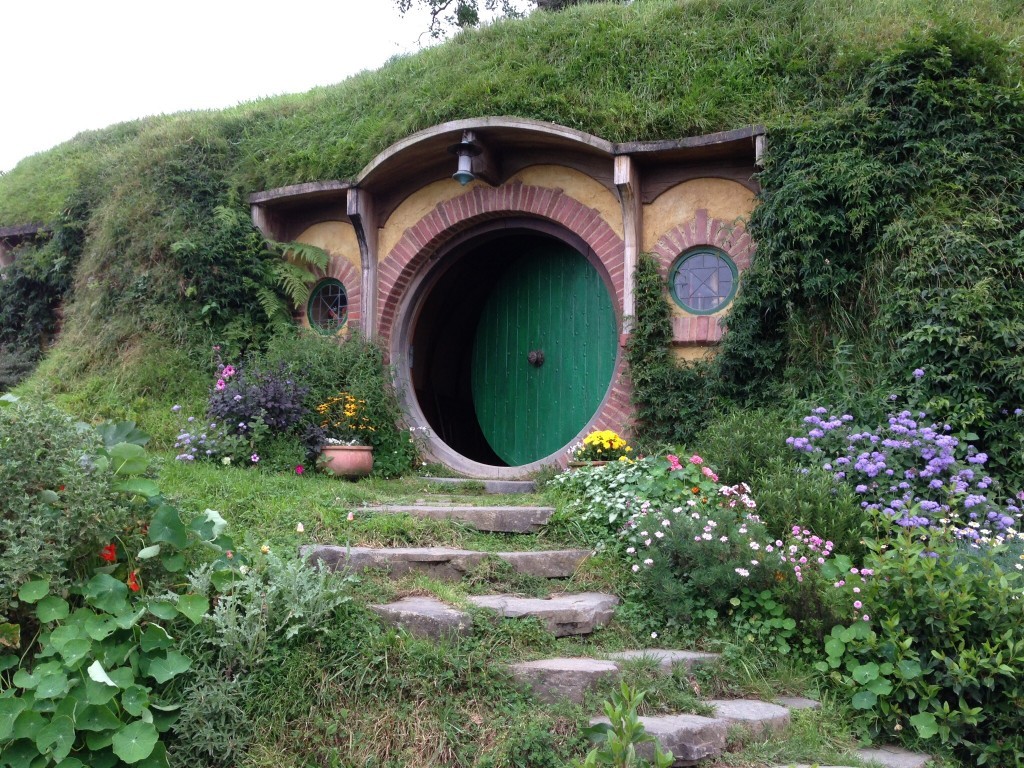 This tree is man made. It was remodeled a few times to get the desired shape. And after everything was OK, the movie director decided that the colour of the leaves was wrong. So his staff re-sprayed every single leaf until it was exactly what he wanted. 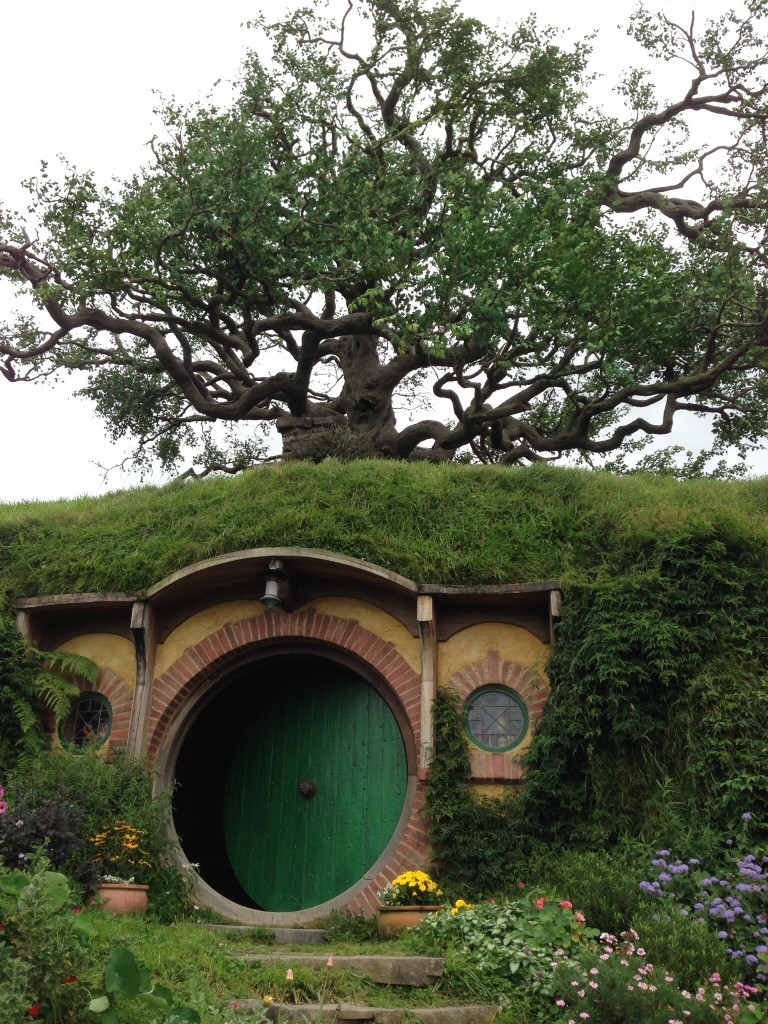 Look at the tiny sun hat and the curtains inside. 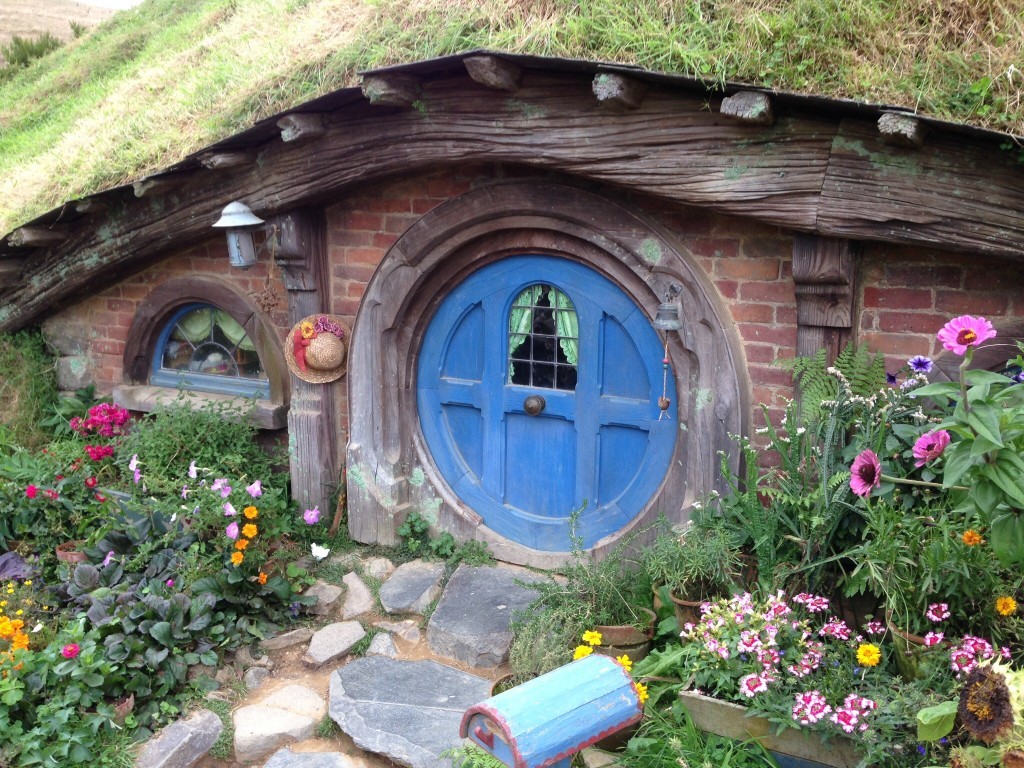 Country style water well –  a bit higher than my knee. 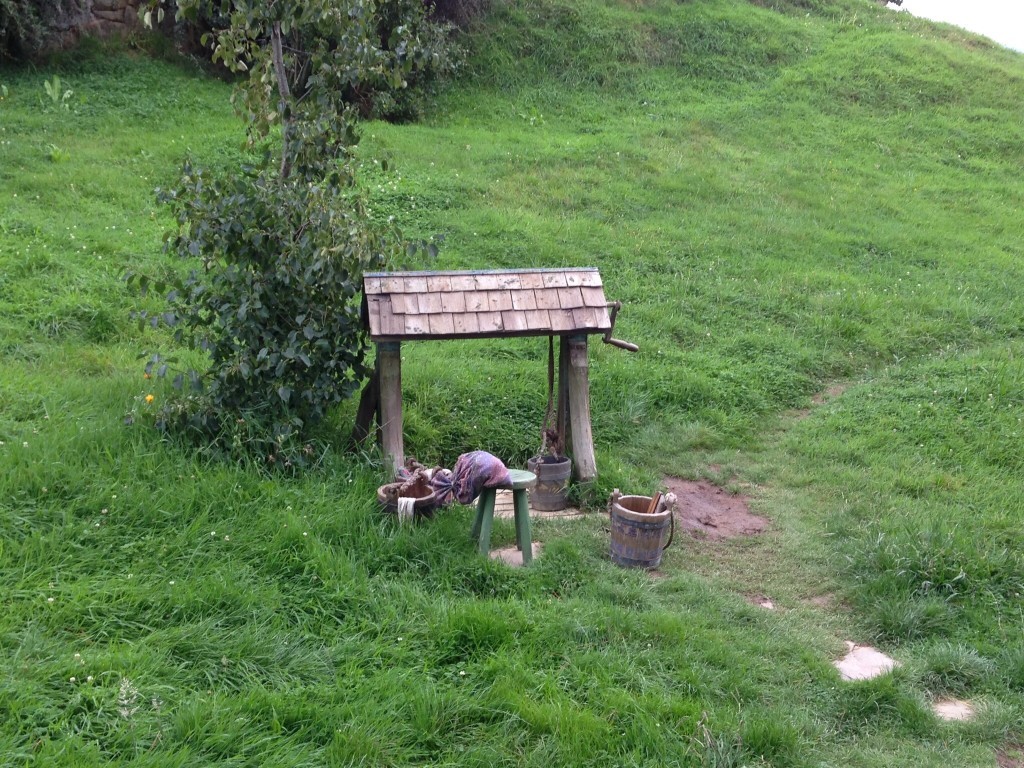 This is just a cutie dwelling. 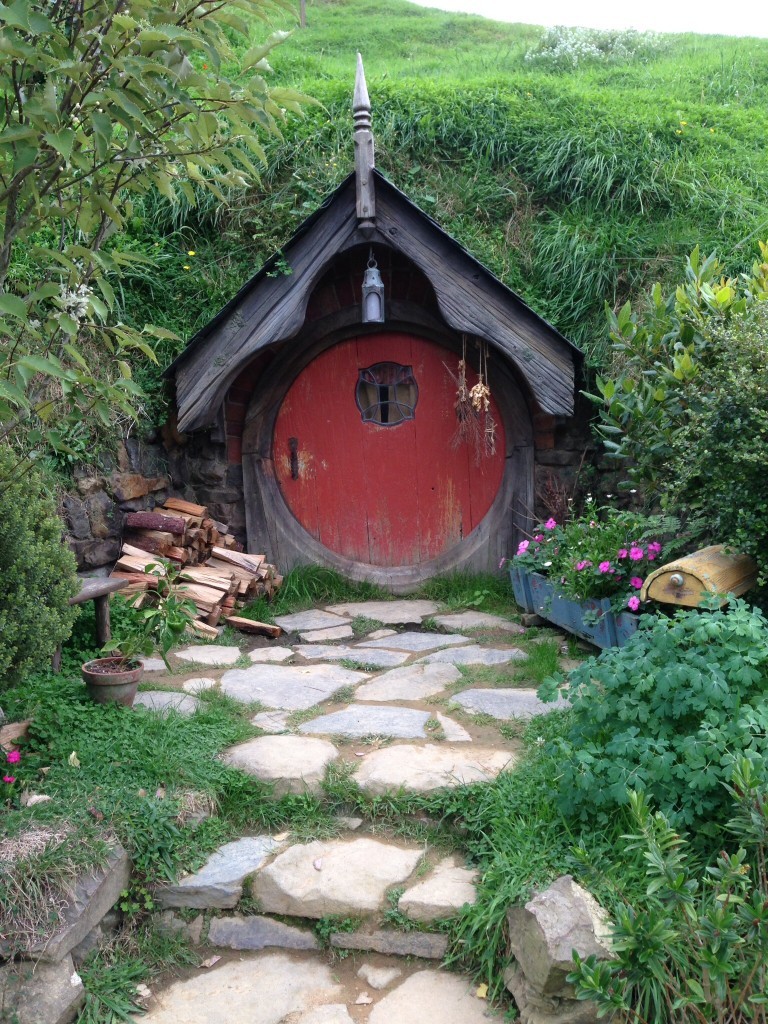 This water pump looks exactly like a real one, just probably half size. 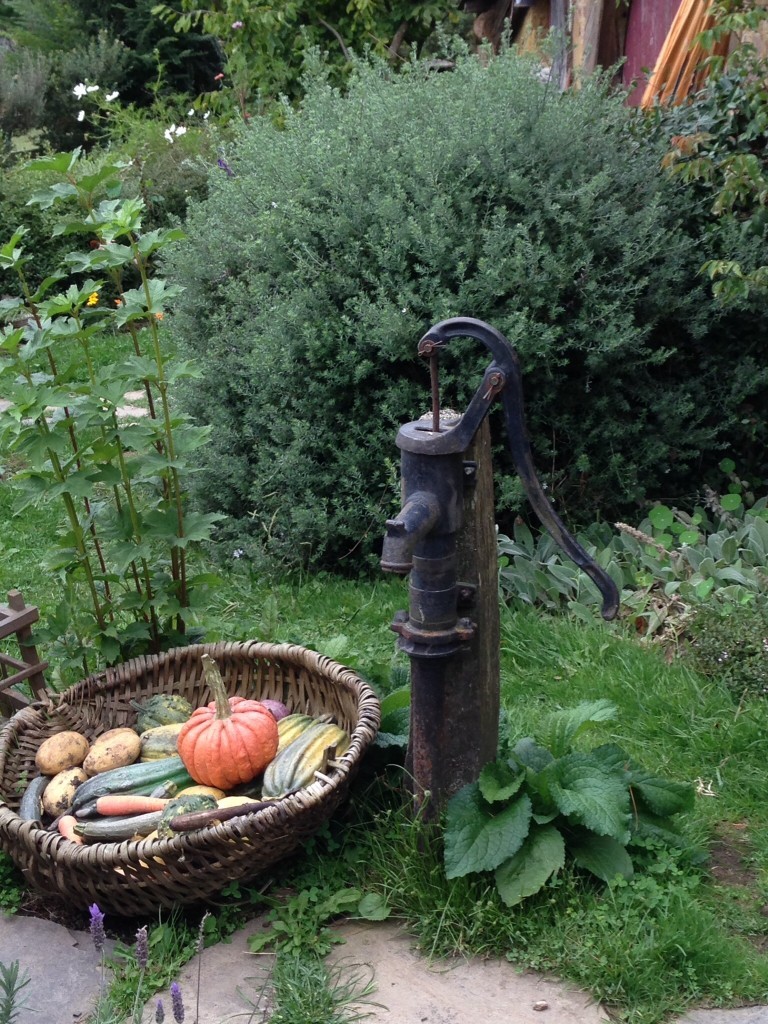 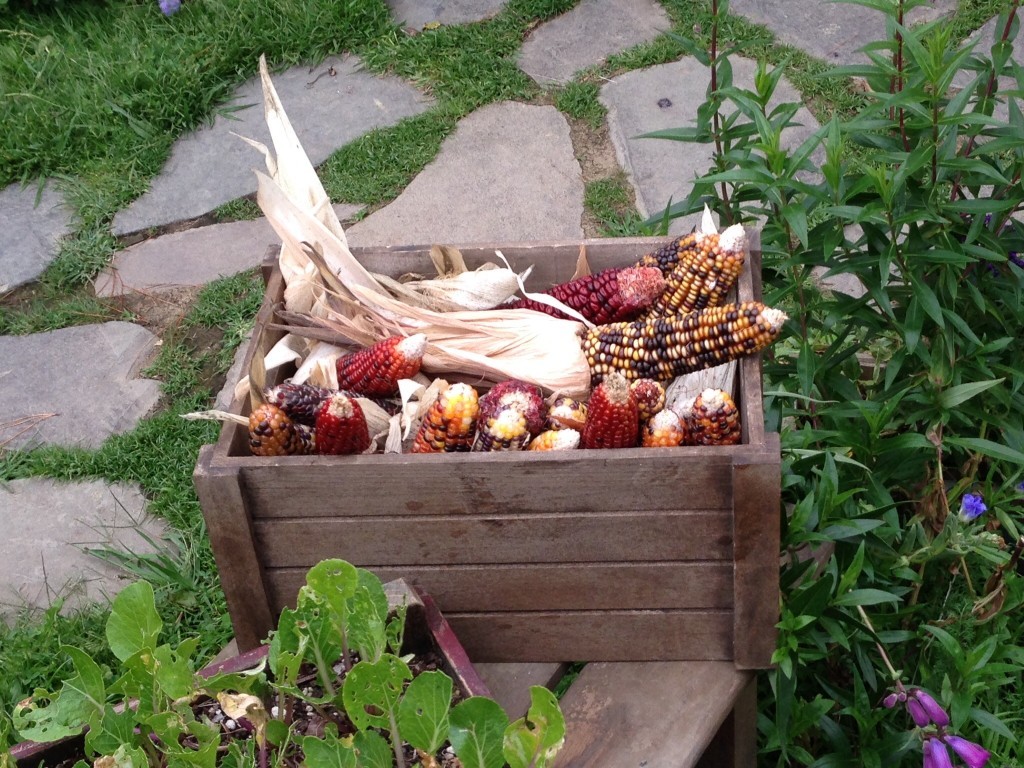 Washing line with some tiny clothes. 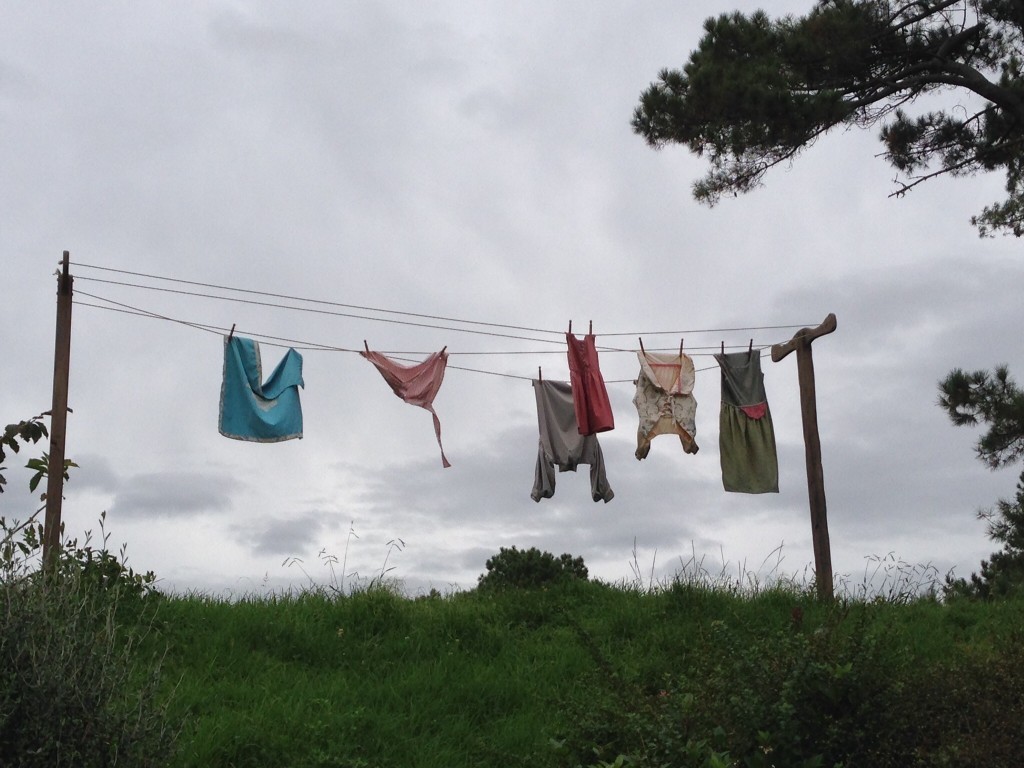 Fish is not real, but so well made that I had to touch to make sure. 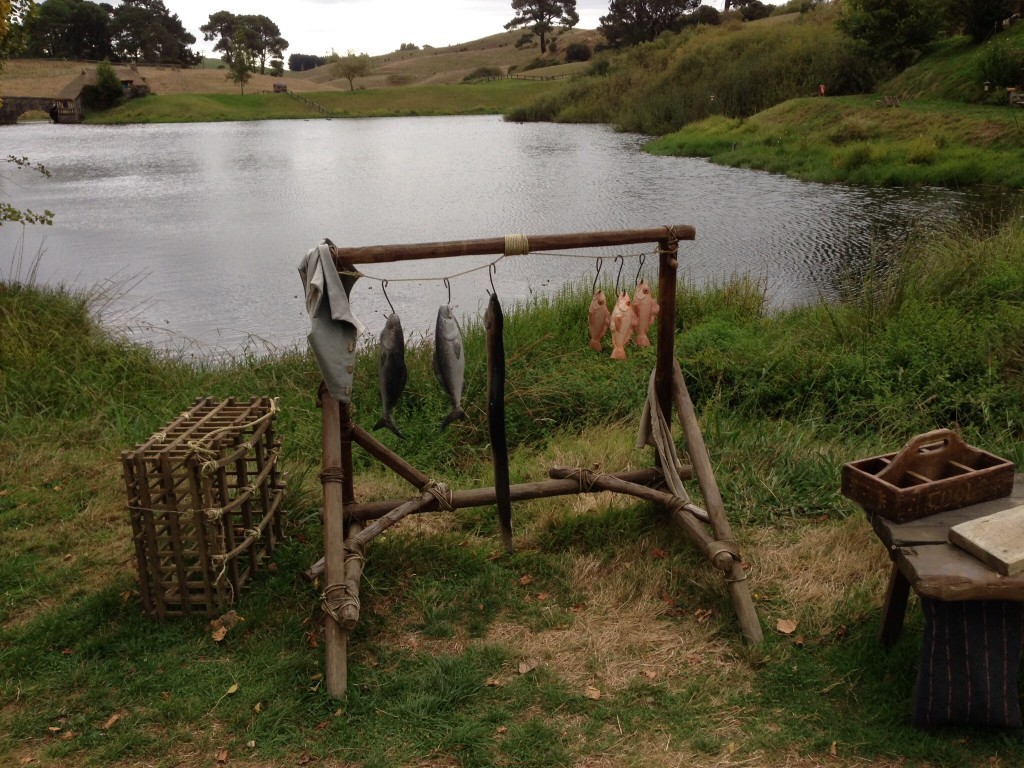 On the way to the pub Green Dragon, we passed this beautiful water mill and a bridge. I could not get over how real it looked. 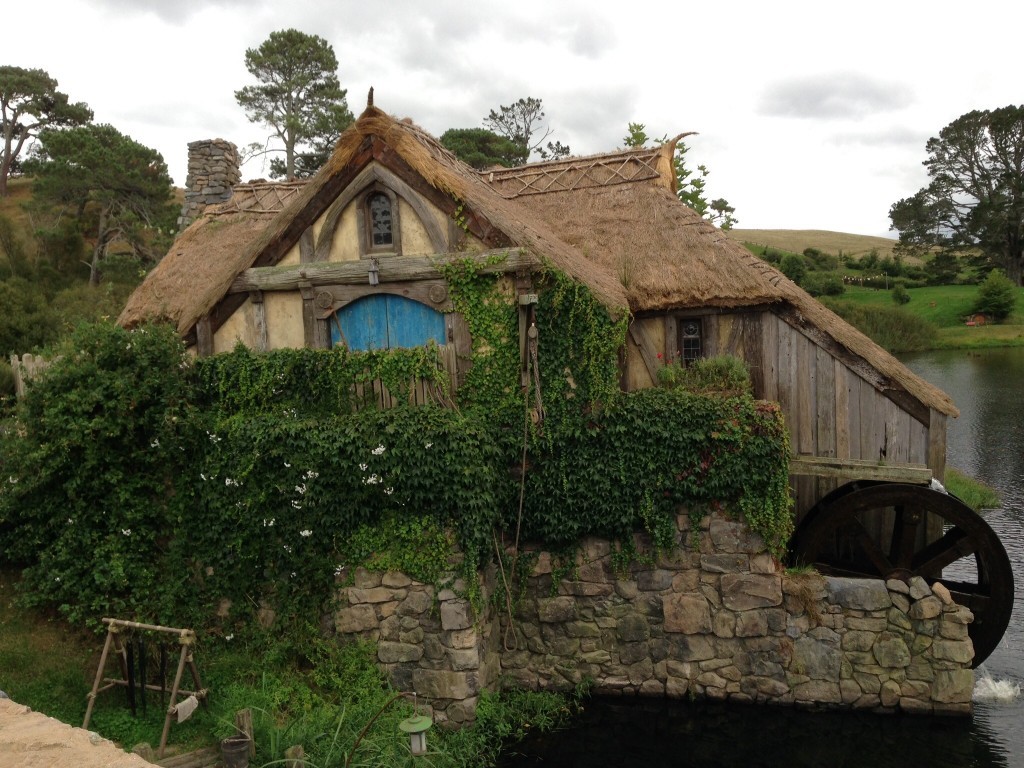 Party area near the pub. This is a very popular spot for weddings, birthday parties and functions. Somehow, I find it difficult to imagine a wedding here. But our guide said that all weekends are booked out for 7 months ahead. 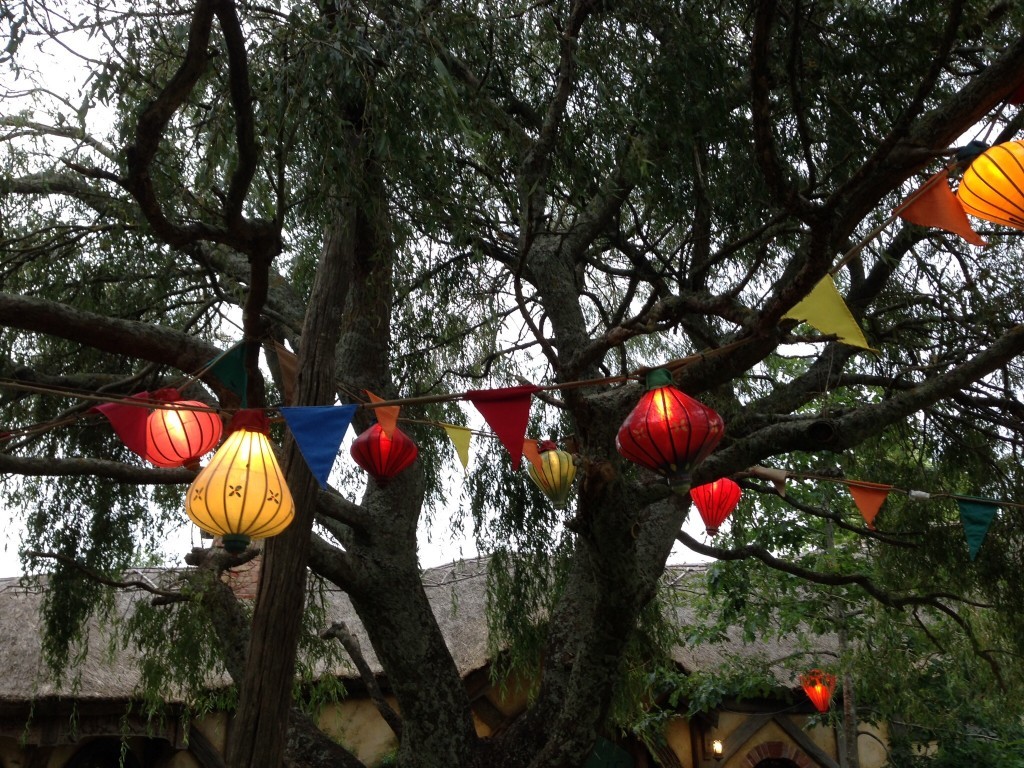 View from the distance.

Pub Green Dragon. Just wait till you see it inside. 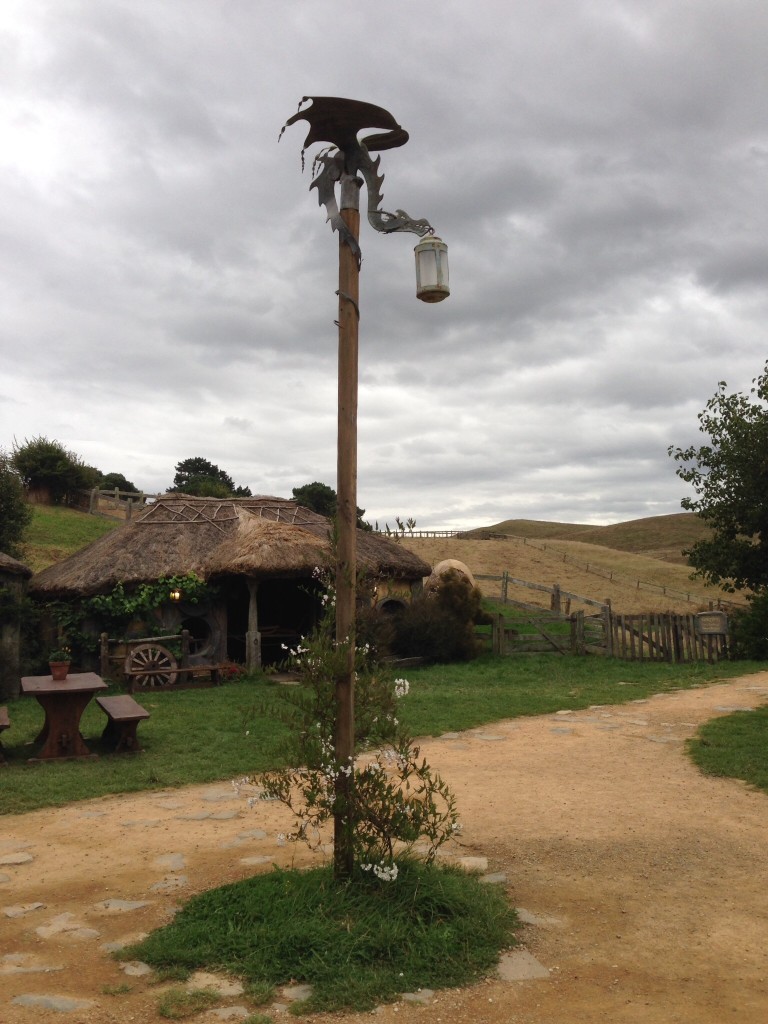 In the pub we all had a glass of beer, ale and cider. For people like me they had a non-alcoholic ginger beer.

True to its’ name – Green Dragon.

Apparently quite a few hobbit parties were filmed here. The atmosphere is fantastic. 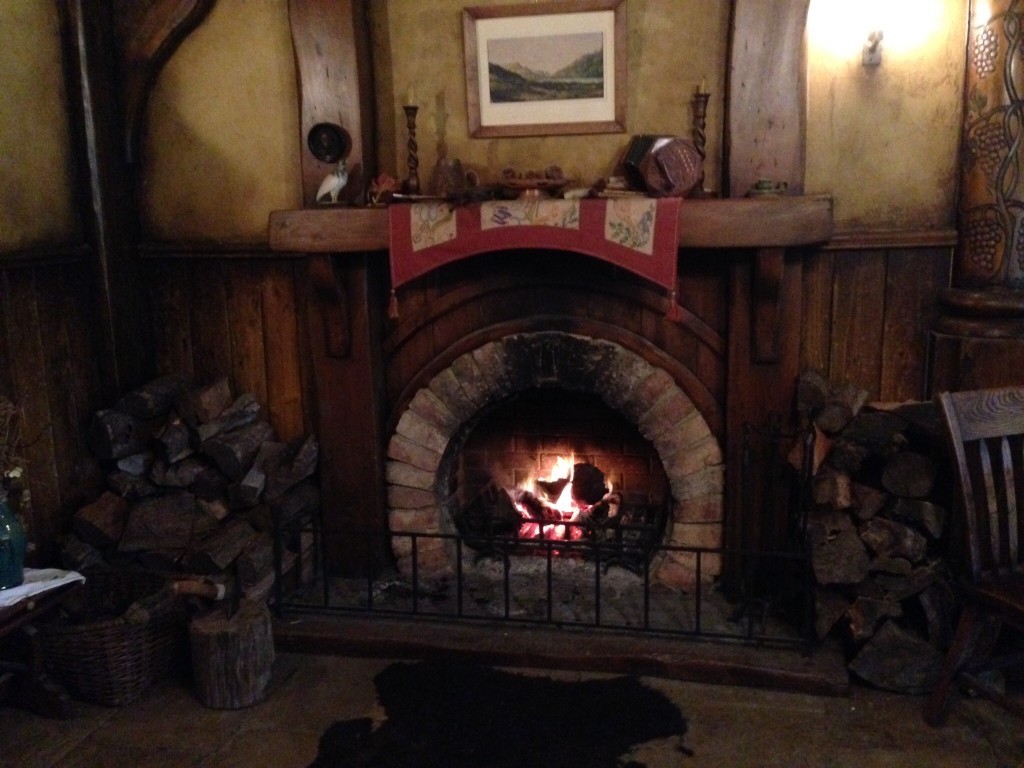 This pub from outside. 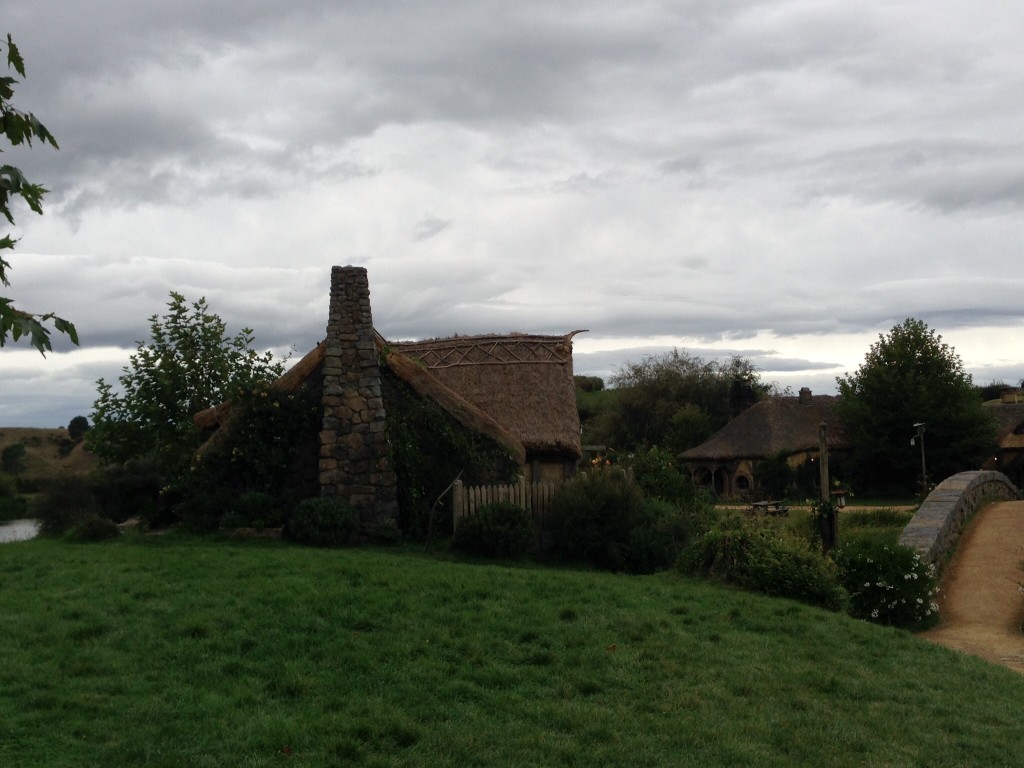 This is a map of the Shire and a huge pear I found on the ground. 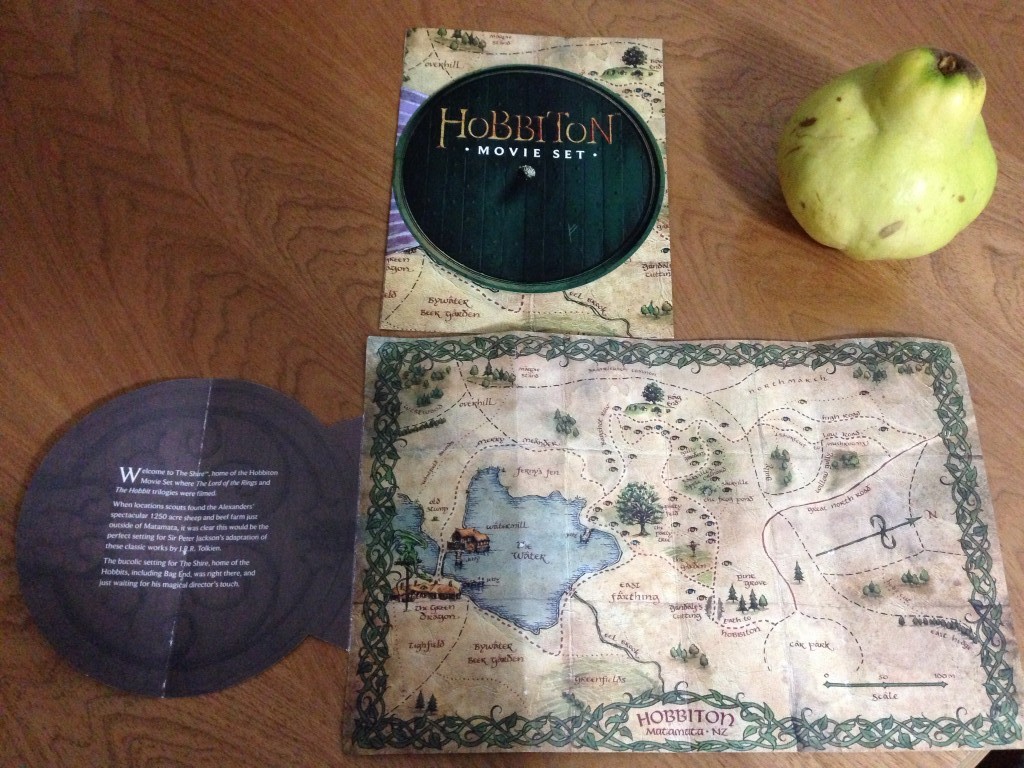 I really, really enjoyed my trip. The whole movie set is very well maintained. The atmosphere is spooky and exciting. Tourists are happy, the owners are even happier. This movie set is a joint venture between Peter Jackson and the farm owner. The tickets are unreasonably expensive – $75 per person. The realistic price should be $35-40. I was disappointed that there were no small cute hobbit souvenirs, only very expensive and useless T-shirts and hats. I would’ve liked to have bought a small figurine, but couldn’t find one.

I would recommend and encourage everyone to go there. But, please, watch the movie first, so you will have at least a general idea of why everyone else except me was kissing the ground where all those hobbits had stomped before. And I also probably will watch it now.

And here is a little safety video from NZ airline – very hobbitable: